Is the Isle of Man TT the world's greatest motor race?

TT 2019 is here. Last year we discovered there's nothing else on the planet like it

Let’s imagine we’re writing the recipe for the world’s greatest motorsport event. What are the ingredients? First, we want some speed. An average of 130mph (or more) across a lap should both test the competitors and thrill the spectators.

Next, a really cool circuit. One that combines fiddly, technical corners and really quick, sweeping stuff, with big long straights inbetween to ensure the machines can really be worked hard. It’s draped across some epic scenery to ensure the TV coverage will look fantastic. 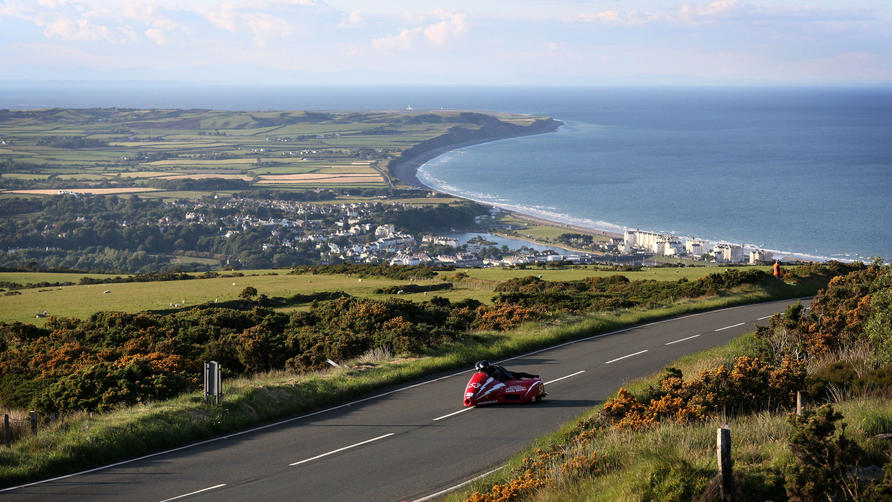 But what about the people there? It needs to be as fan-friendly as possible, scrapping soulless grandstands that cost a fortune to get into. So, why not a sport you can literally watch for free from your front garden? Or, if you fancy something a bit more adventurous, you can hike up a hill or traverse a field for an even more intimate view. We’ll make the circuit nice and big, so that you can visit every year and never run out of new places to watch.

You want a glimpse of the sport’s heroes, too? Easy: the paddock is open to anyone, with the competitors and machinery prepped for each race right in front of your eyes. Should you want to take part yourself, there’s no great hierarchy: prep a machine well and you can mix it with the factory teams on a much smaller budget.

If that all sounds like a dream, then it’s actually a 111-year-old reality. It’s the Isle of Man TT. Alright, that means bikes, and we normally deal in cars. But trust me. After spending a long weekend at this year’s TT, experiencing its intoxicating highs and infamous lows, I can’t think of a more enthralling motorsport event on Earth. Including those with the correct number of wheels. 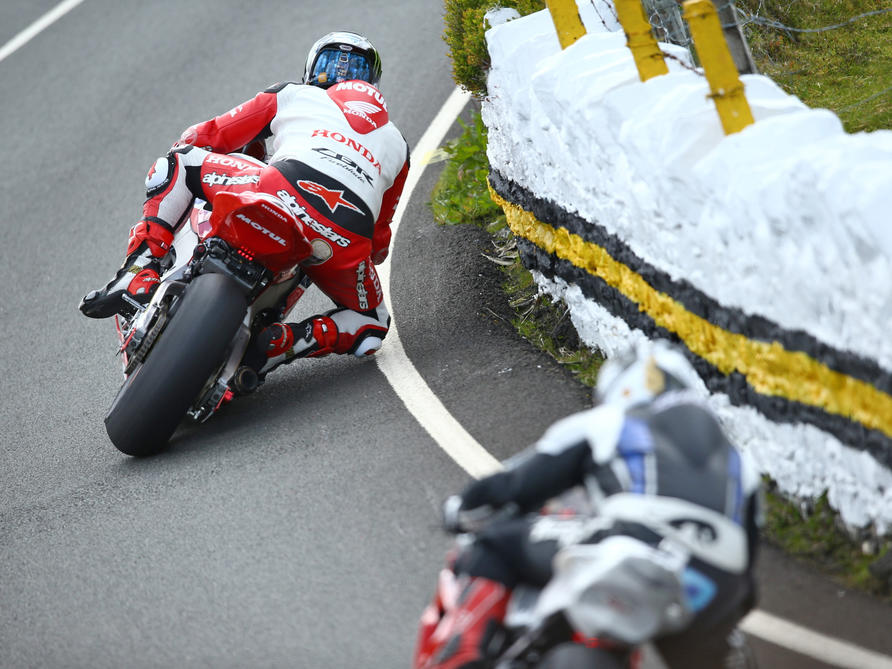 Practice and race sessions stretch across two weeks, with a slightly dizzying array of bike classes that might befuddle the casual onlooker. But you’ve no need for expertise to have your jaw dropped by the physical rush of bikes blitzing past your face at up to 200mph, nor their stomach-churning skips and squirms over crests or joyous little wheelies as they accelerate hard at corner exit.

And all with your face as close to the riders as you dare put it. Stepping foot between the walls either side of the live circuit is quite rightly illegal (and severely punished by the Isle of Man courts), yet you can perch on top of those walls, or poke your head right over them. It feels utterly mad and joyously liberating to see racing at such close quarters.

It’s what sets road racing apart from traditional circuit racing. The TT course isn’t a specialist racetrack, but a neatly palindromic 37.73 miles of Isle of Man road closed off an hour before race time, with bikes flung through towns at six times the urban speed limit before snaking fearsomely through the island’s lush scenery, culminating in the legendary plunge over Snaefell Mountain.

The latter famously has no speed limit when it’s open to the public, and during TT fortnight it’s one-way, allowing visitors to the island to play TT racer on their bike (or TT marshal in their car) when the circuit isn’t closed for racing. Sure, you can drive stretches of the Le Mans track, or sections of World Rally stages. But not under the same, no-limits conditions as the racers themselves. It all feels gloriously unhinged. 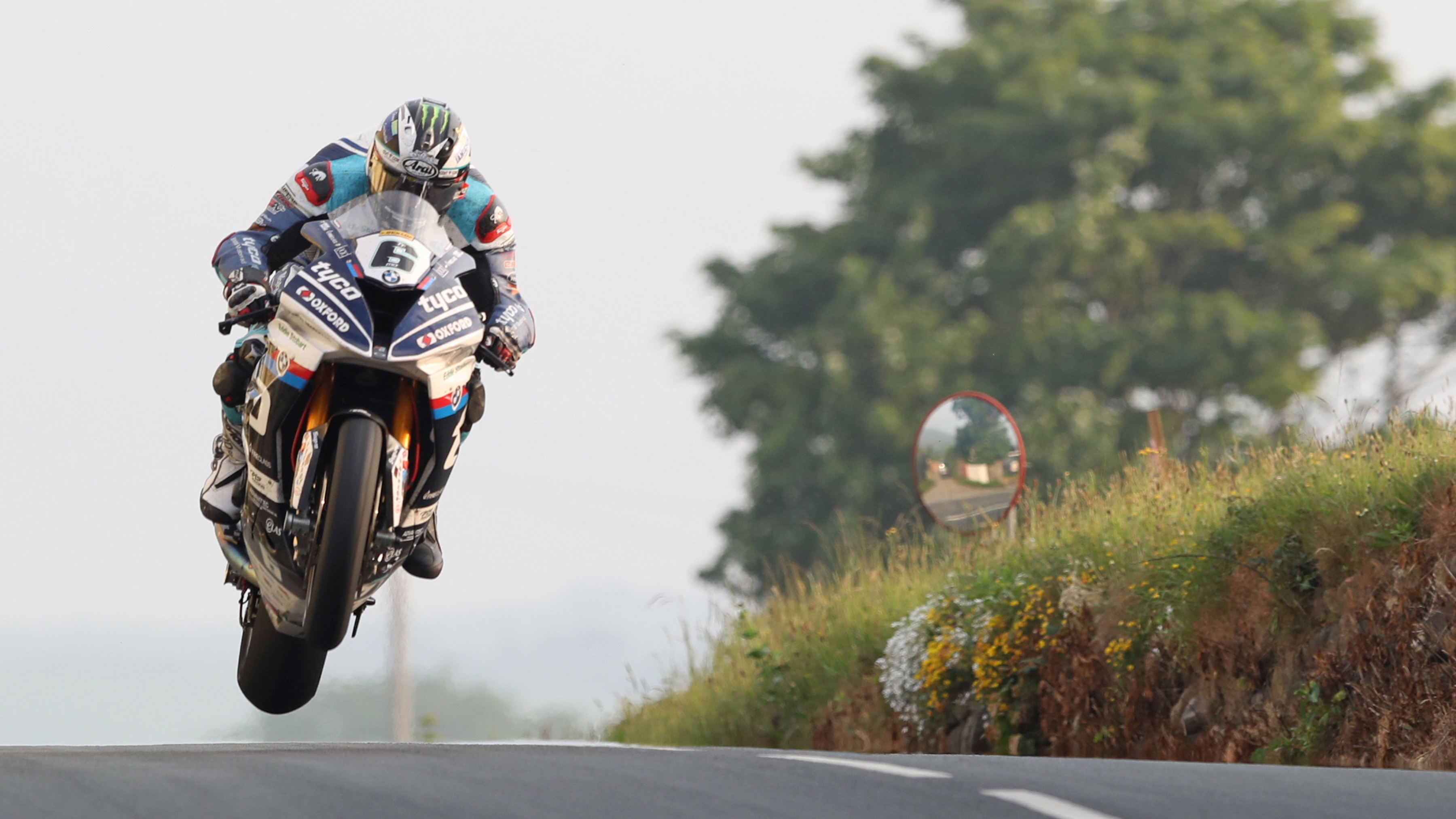 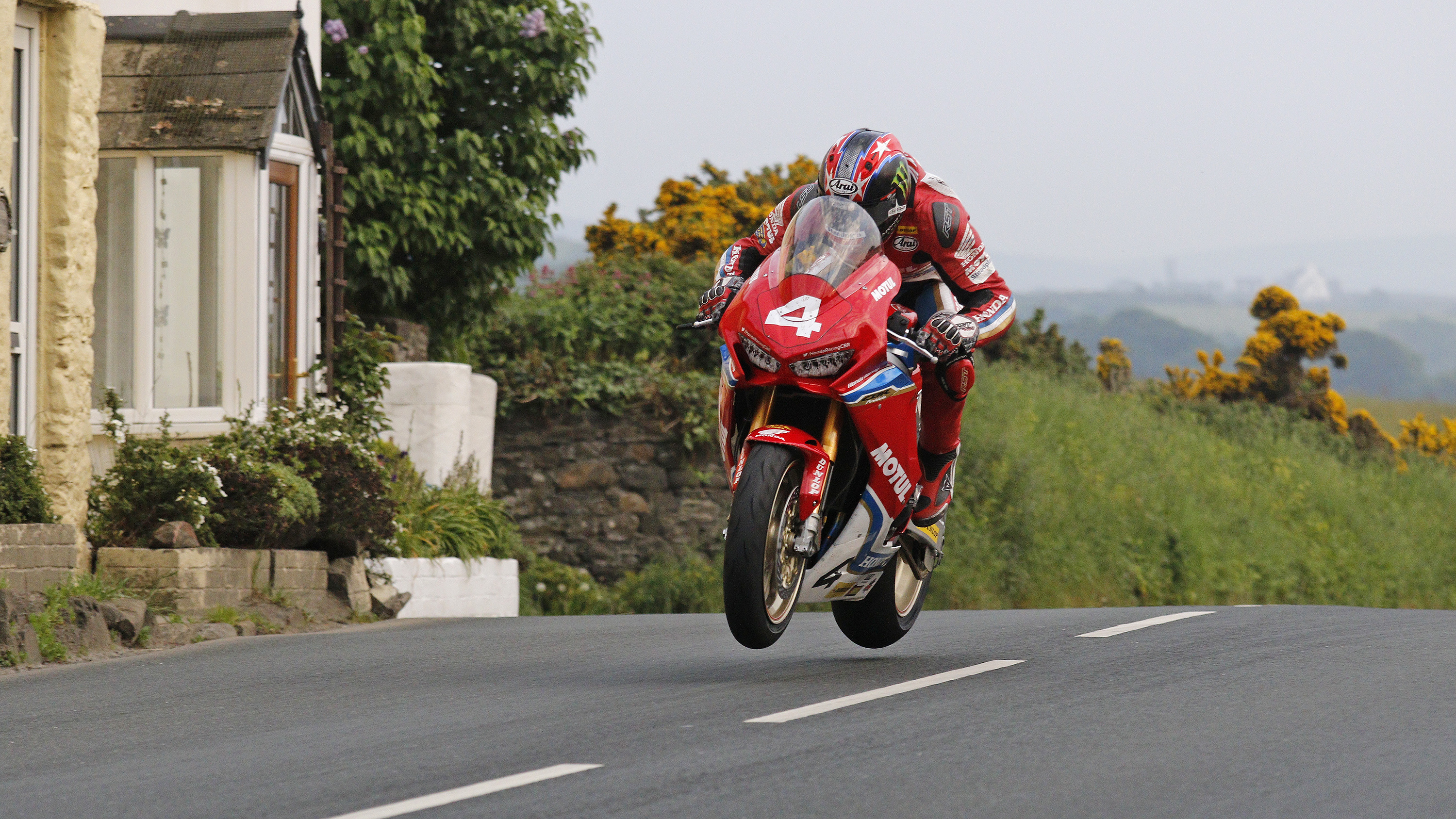 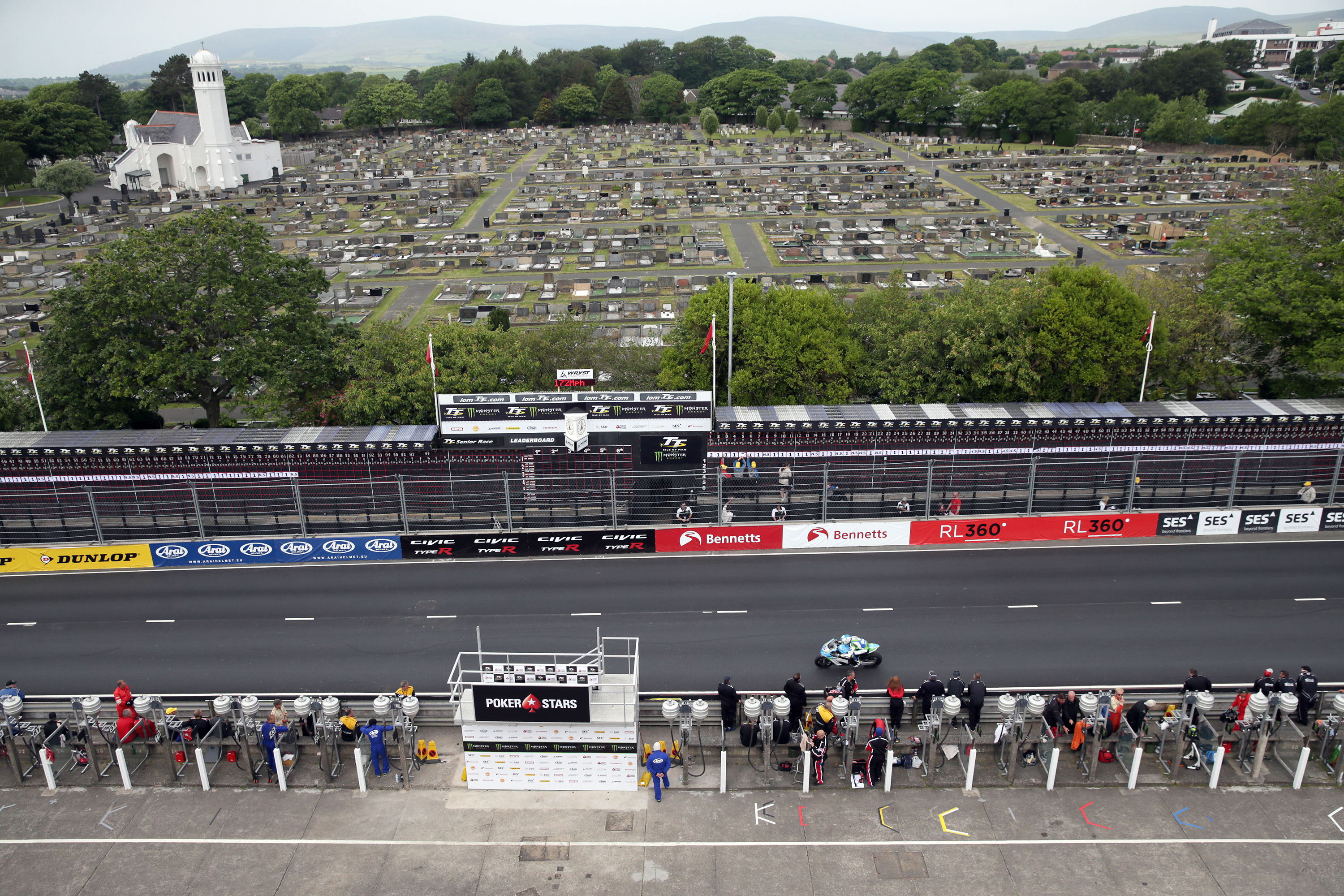 It’s under these circumstances I meet Ian Hutchinson, as he gives me a full 37.73-mile lap in a Honda Civic Type R course car. Hutchy has won 16 TT races, and remains the only man to win five races in one week, back in 2010 (pictured in the lead image). His knowledge of the course is evident in his quite absurd commitment in a hot hatch significantly larger and heavier than a race bike. It’s also his first time driving a manual car since the latest in his series of deeply unlucky leg injuries. It’s yet another that could have been a career ender, and it’s quite staggering he’s fit enough to climb on a bike this year. His left leg was in a cage just weeks ago.

When you’re in the paddock and the race is about to start, you think there’s got to be easier ways to earn a living

“Yeah, it’d be easier to pack in!” laughs Hutchy. “But if you pack in, then that’s it; you’re never riding round the Isle of Man like that ever again. The build-up here is a bit like going on a rollercoaster; you’re sat in the chair, strapped in, and you’ve no idea why you’re doing it again. But as soon you get going, it’s a different story.

“When you’re down in the paddock and the race is about to start, you think there’s got to be easier ways to earn a living. You’re thinking of all the things that can go wrong. Then as soon as you set off down Bray hill, you enjoy riding the bike and it all goes out the window. You’re no longer nervous, because you’re in control. You know what you’re doing, barring anything that’s out of your hands. Which can happen anywhere in life, can’t it?”

Which segues us to the elephant in the room when it comes to the TT. Death. There’s no avoiding it on this island; more than 250 people have died across TT and Manx GP events held since 1907, and the last year without a fatality in either was 1982. In the lead-up to 2018’s event, local boy Dan Kneen, one of the strong contenders for podiums – perhaps wins – was killed in practice. Interviews with Dan filled the bike magazines and TT race programmes adorning café and pub tables across the island, lauding him a future hero, yet by the time anyone could read them, he’d passed away. 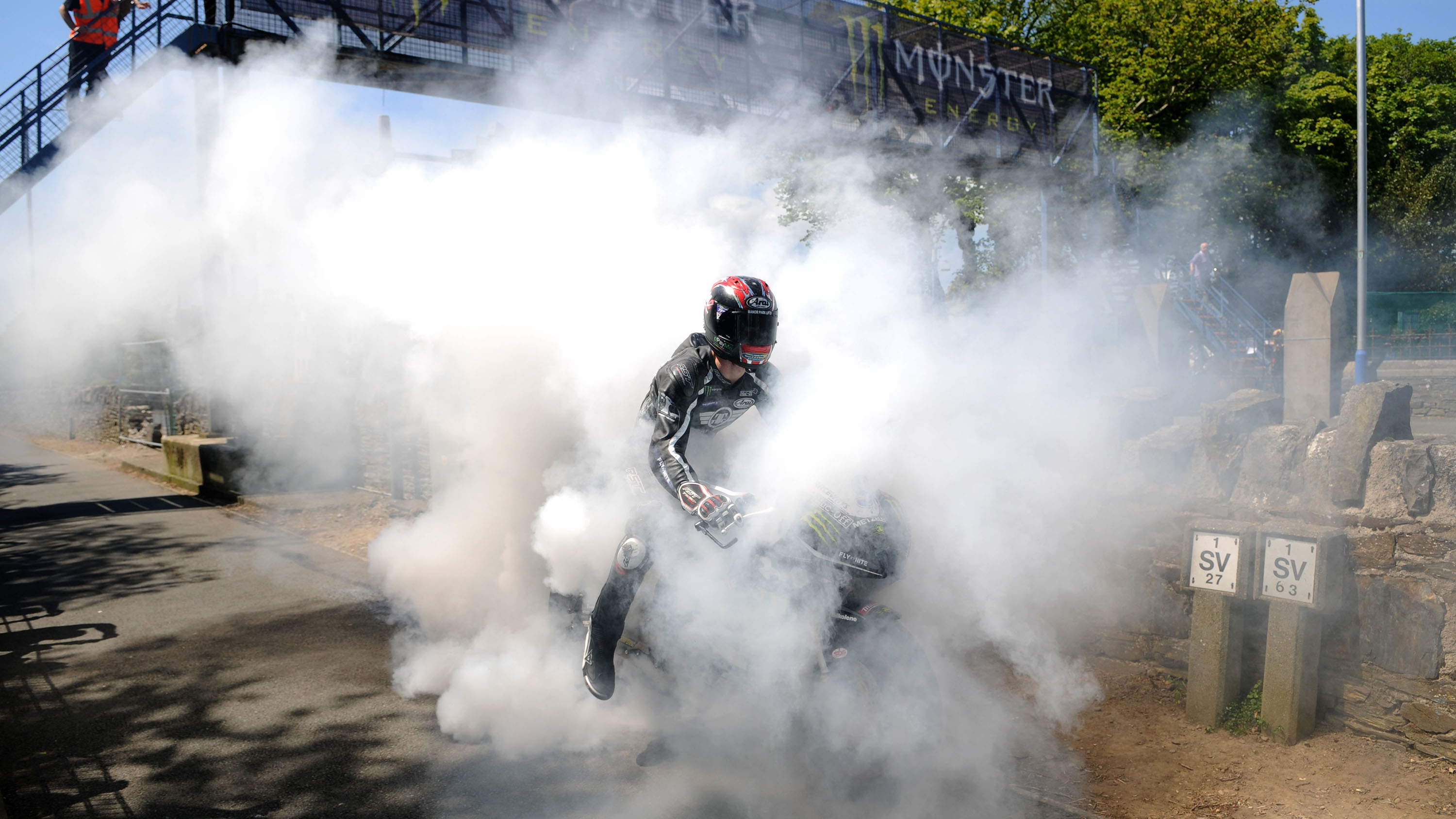 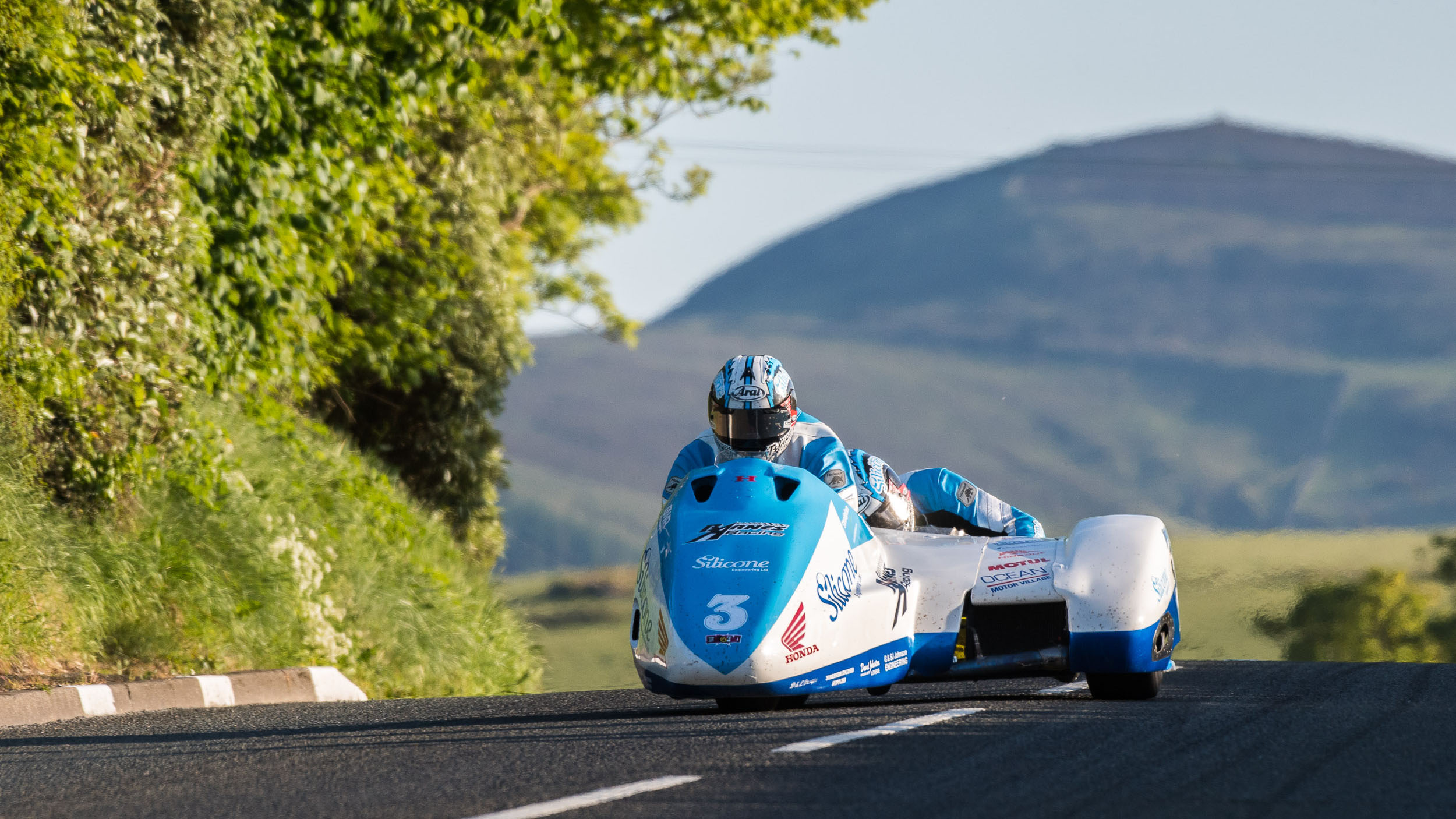 It’s a deeply strange thing to swallow, but there’s a sense it’s almost normal here. Deaths are respectfully reported but they aren’t mawkishly dwelled upon, and on the Monday of this year’s race week, the fatal accident of TT newcomer Adam Lyon in the morning’s Supersport race didn’t hold up the running of the afternoon’s Superstock race.

Away from the island, my blood runs cold writing that, but as I stood watching, mid race fever, it made sense. There’s something admirable about how the TT soldiers on through tragedy – God knows the competitors have had enough practice at it – which sets it apart from every other motorsport event on earth. And it’s not like the riders are the least bit blind to what might happen to them. 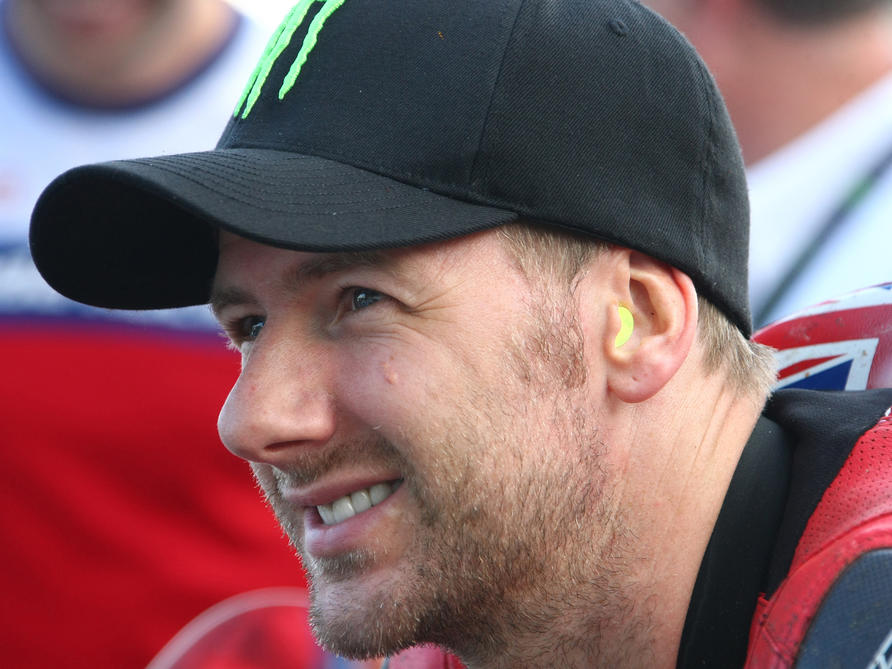 “The more years you come, the more deaths you’ll have seen here, so then at every corner it’s happened, you remember it,” says Hutchy (right). “It’s not a bad thing to think about it, because most of the time it’s happened for a reason, and it just makes you realise ‘don’t go 100 per cent here, it can bite you, this corner…’

“I think you need to get yourself sharp and up to speed on a race circuit, but then come into road races like the TT and pull back a little bit from that commitment level, knowing there’s no gravel pit on the outside to catch you. It’s getting to the point that there’s riders doing short circuits, getting a sniff of a win, then they’re coming here and riding exactly the same, they’re not pulling back. I always feel like I’m a little below flat out. I’ve got six laps to try and win the race, not six miles.”

Yet Hutchy still sits fifth on the list of total victories at the TT, despite having missed numerous TT race weeks due to his dreadful injuries. Comeback from his latest leg fracture meant he couldn’t help but pull back his pace this year, but further up the grid the warm conditions saw lap records torn to shreds, and two of 2018’s brightest stars – Dean Harrison (right) and Peter Hickman – certainly didn’t appear to be riding with much of a safety margin.

“It’s always strange, road racing,” Hutchy continues. “I remember watching in 2014 when I was coming back from injury. I went to Barregarrow to watch the Superstock race and when the first few bikes came through, I thought ‘I’m never going to be able to do that again, they look f***ing mental!’ Then one year later, I won the Superstock race. But now every time I approach that corner on the bike, I have visions of what I’d seen. I try to avoid watching now, because I don’t want to be thinking how bad it all looks from the outside.” 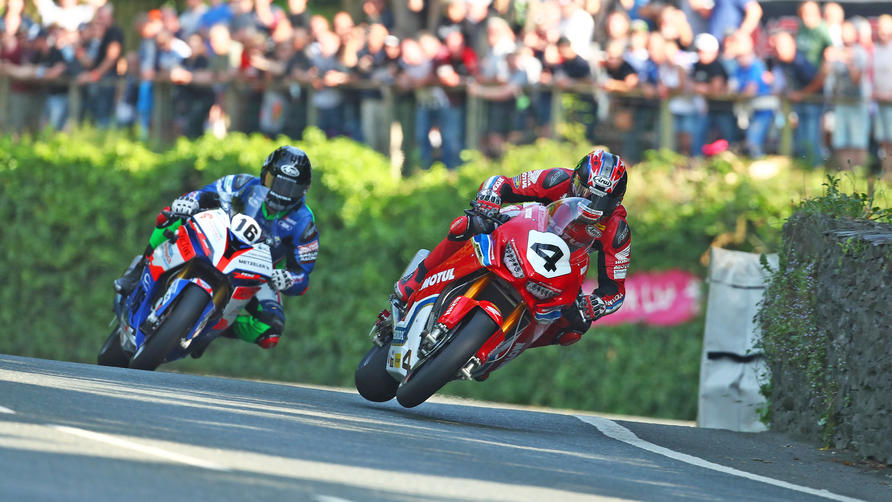 When the riders scare themselves at the sight of their competitors’ pace, you know you’ve got a fairly committed race event. Come here as a car racing fanatic and the attitude to health and safety – for both spectators and competitors – feels at least three decades off the pace.

Yet it’s one of many factors that help create the relaxed, unpretentious attitude that makes the TT so special, so unique. Icons don’t just appear on the race grid: there’s Ernie Coates, the man who sells vital components from the back of his van to all levels of competitor; Wheelie, the spectator who’s worn the same leathers for 30 consecutive TTs; and the group of local Scouts, who manually change the timing boards on the pit straight. Yes, there's a TT badge for them to earn…

The island is a petrolhead’s haven all fortnight, with the seaside resort of Douglas handed over to stunt shows, beer tents and fairgrounds, all surrounded by hundreds of priceless classics and superbikes parked up without a thought to their security. You could leave the keys in and they’d never move, such is the community atmosphere on the Isle of Man.

You could argue the risk involved is beyond unfashionable, but sanitise the TT’s dangers and you’d lose its scarcely fathomable thrills, for racers and spectators alike. There’s a heroism here that’s unmatched anywhere, and it’s perhaps because of – not despite – its outrageous danger that, 111 years on, it remains the world’s most fascinating race. The world’s greatest race.

Top Gear delves deeper into the world of road racing 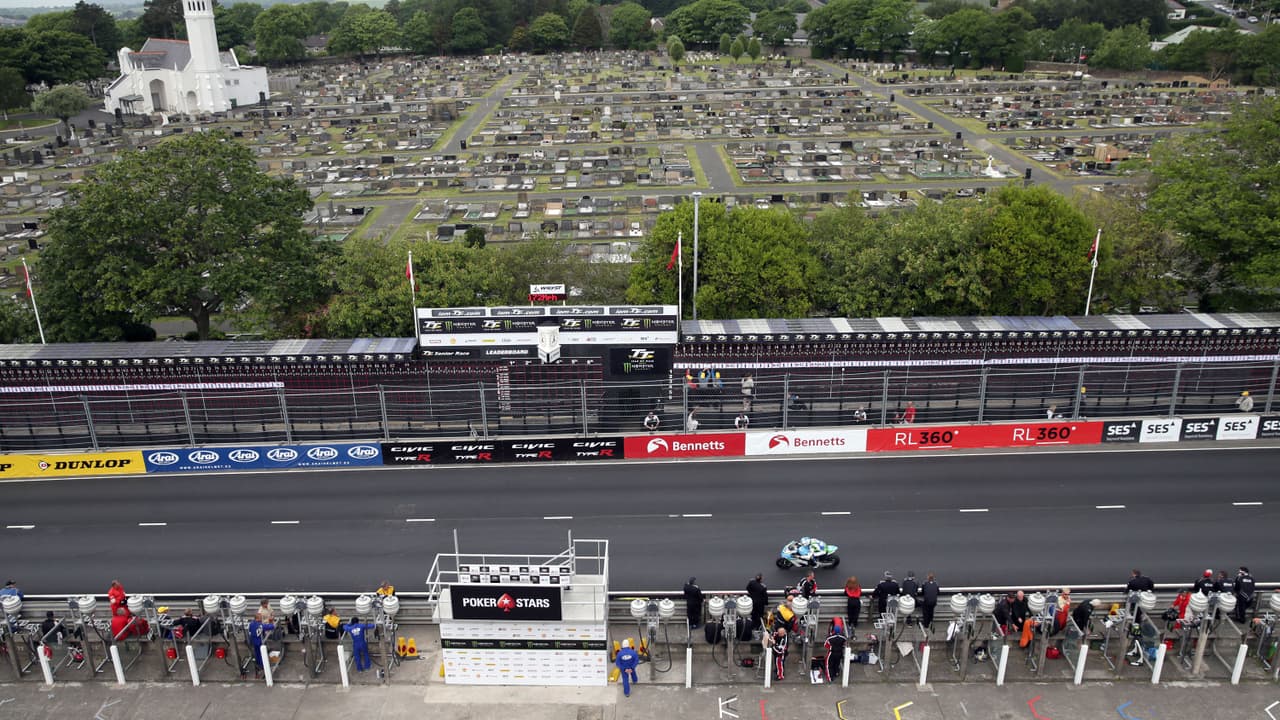