A 2000bhp Land Cruiser is the world's fastest SUV. Top Gear's been behind the scenes

“The front end was floating a bit at 230mph,” says Toyota’s pro driver, Craig Stanton. “Other than that, it was flawless.” Forgive us for being, y’know, chickens, but we’d suggest a bit of front-end floatiness isn’t something to brush over at 230mph. Not to Stanton and his comrades, though; their bravery has just seen this Land Cruiser claim the title of world’s fastest SUV.

It hit 230.02mph on a North American runway, stealing honours from Brabus, whose Bi-Turbo V12 GLK claims 211mph. “We thought, ‘why don’t we take a Land Cruiser, make it ultra-powerful, and just see how fast we can make it can go?” says the manager of Toyota’s Motorsport Technical Centre, Chuck Wade. 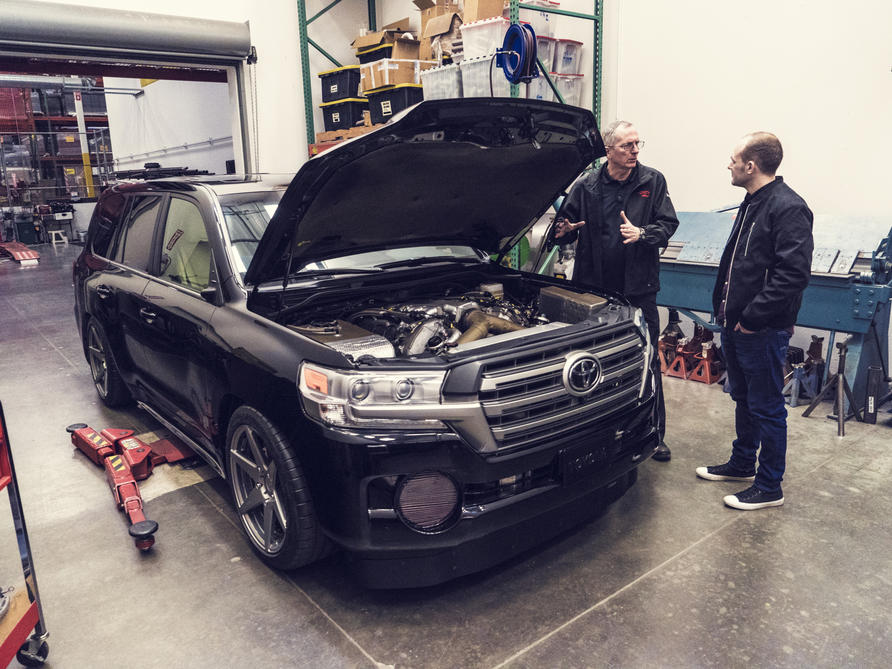 The answer, it turns out, is ‘very fast’. But how do you make a near three-tonne SUV faster than a LaFerrari? Top Gear went behind the scenes before the record, in Toyota’s Los Angeles-based skunkworks department, to see the Land Speed Cruiser take shape…

Now, the Brabus’s route to going quickly was simple. Take the smallest, lightest Mercedes SUV and put a twin-turbo V12 in it. Simple. Toyota’s route, however, is a little less obvious. As standard, the Land Cruiser weighs 2.6 tonnes and has the aerodynamic profile of an outhouse. Short of gutting the V10 from a spare Lexus LFA – if there is such a thing – there’s no oversized engine in its locker for a transplant.

So Chuck’s team have set about fiddling with the Land Cruiser’s standard engine. In the US, that means a 375bhp 5.7-litre V8 powered by petrol, a liquid it drinks at a rate of around 15mpg. More importantly, though, that V8 yields a 142mph top speed.

Some way short of 211mph, then. So Chuck and his engineers are looking for power. Much more power. “Calculations show us 1900bhp will get us to the speeds we’d like to attain,” he tells us. “And the engine – as in the block and everything except the head gasket – is built to go to around 4000bhp. But with everything we’ve got built into it now, we’re probably going to be limited to about 3000bhp. Which is still good power. It can get you to work on time!” 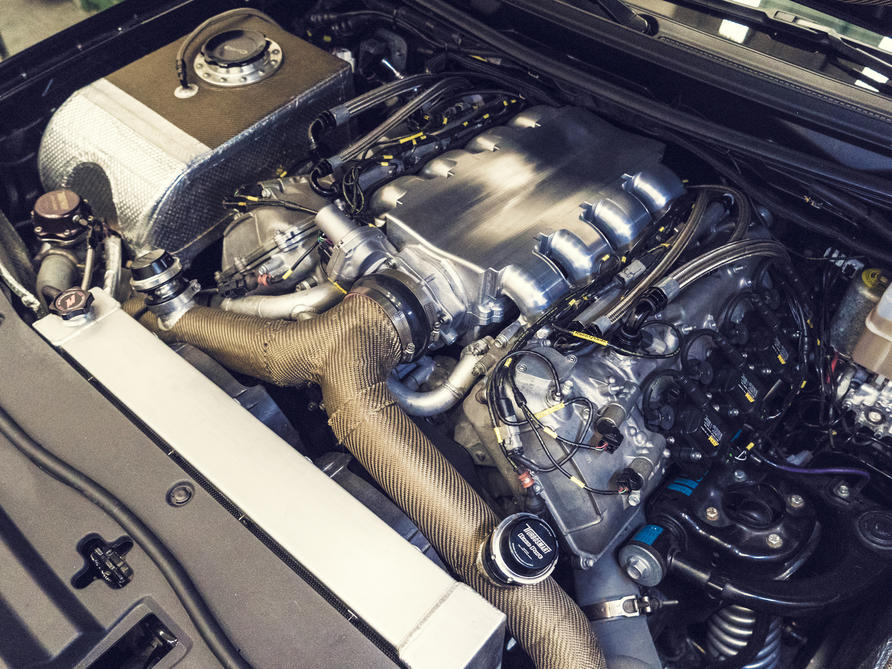 Anything that is limited to 3000bhp is good in TG’s book. The biggest change to the engine is its new turbos, which sit behind those gaping intakes sitting below each headlight. Described by the team as ‘volleyball-sized’, they’re ball-bearing turbos made by Garrett, able to provide up to 55psi of pressure. Note their wire mesh housing, so they can gulp in lots of cool air but stay unclogged by unfortunate rabbits. Or coyotes, when they’re at Toyota’s Arizona proving ground…

The Land Cruiser’s standard automatic gearbox has gone, replaced by a drag-minded three-speed gearbox with an overdrive. It’s built to handle 3000bhp. Chuck has fitted a Weissman Locker differential – “a bitchin’ diff”, he affirms – while the suspension is from Toyota’s aftermarket TRD team. It’s been revalved and resprung, while the car, you’ve no doubt noticed, sits around five inches lower than standard. Peer beneath and the exhaust setup is practically a work of art, though for the high-speed runs, there’s a clean underbelly panel fitted to aid aerodynamics.

You might have guessed the aero would need some work, but it’s also the area with some of the quickest gains. There are cameras rather than wing mirrors – “we don’t want elephant ears on the side of the car,” says Chuck – while the rear spoiler incorporates an adjustable Gurney flap. Getting the Land Speed Cruiser’s centre of gravity as far back as possible has been key, because the front driveshafts have gone. This Land Cruiser may have eight times as much power as standard, but it’s rear-wheel drive only. Yikes. 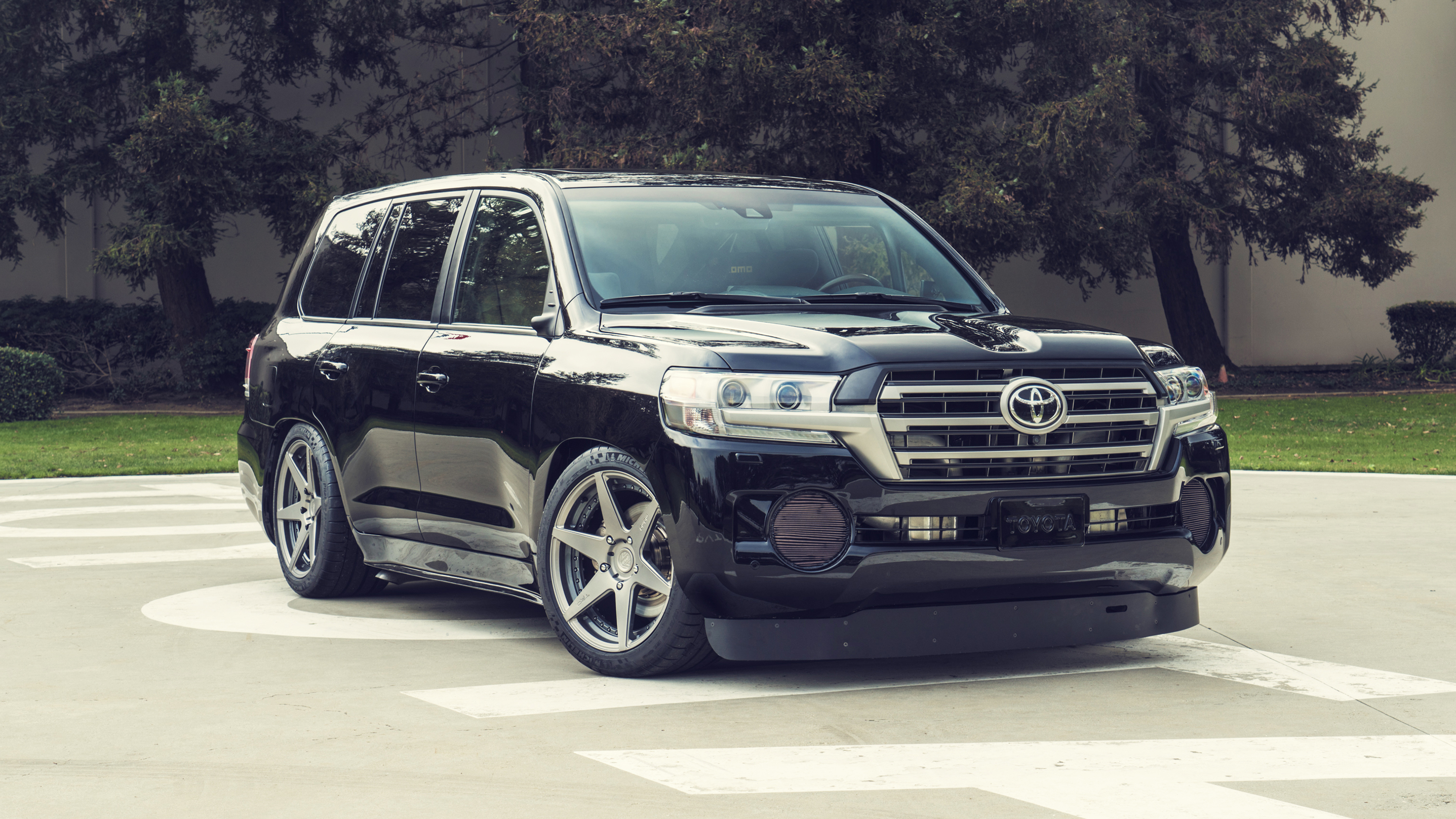 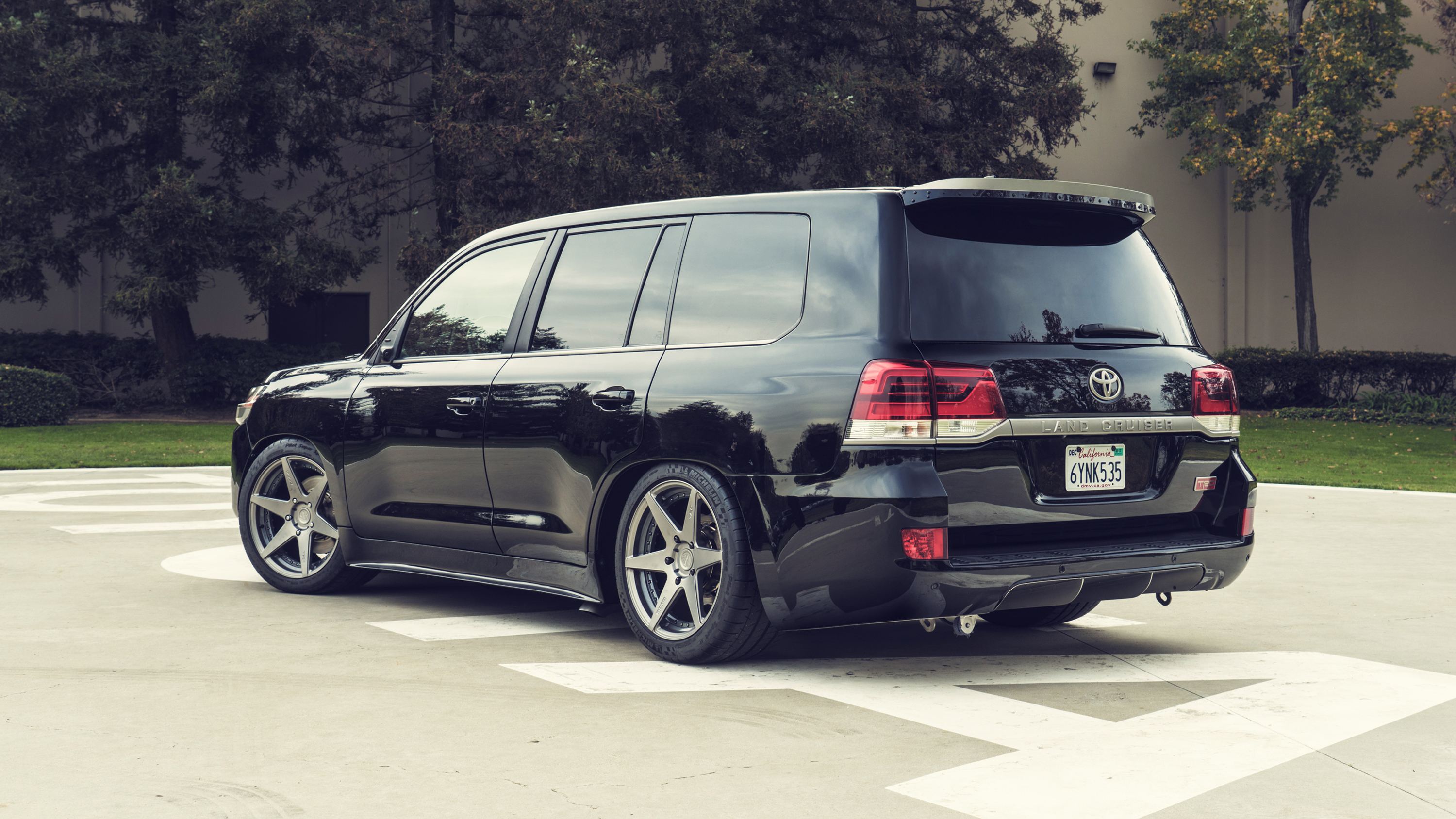 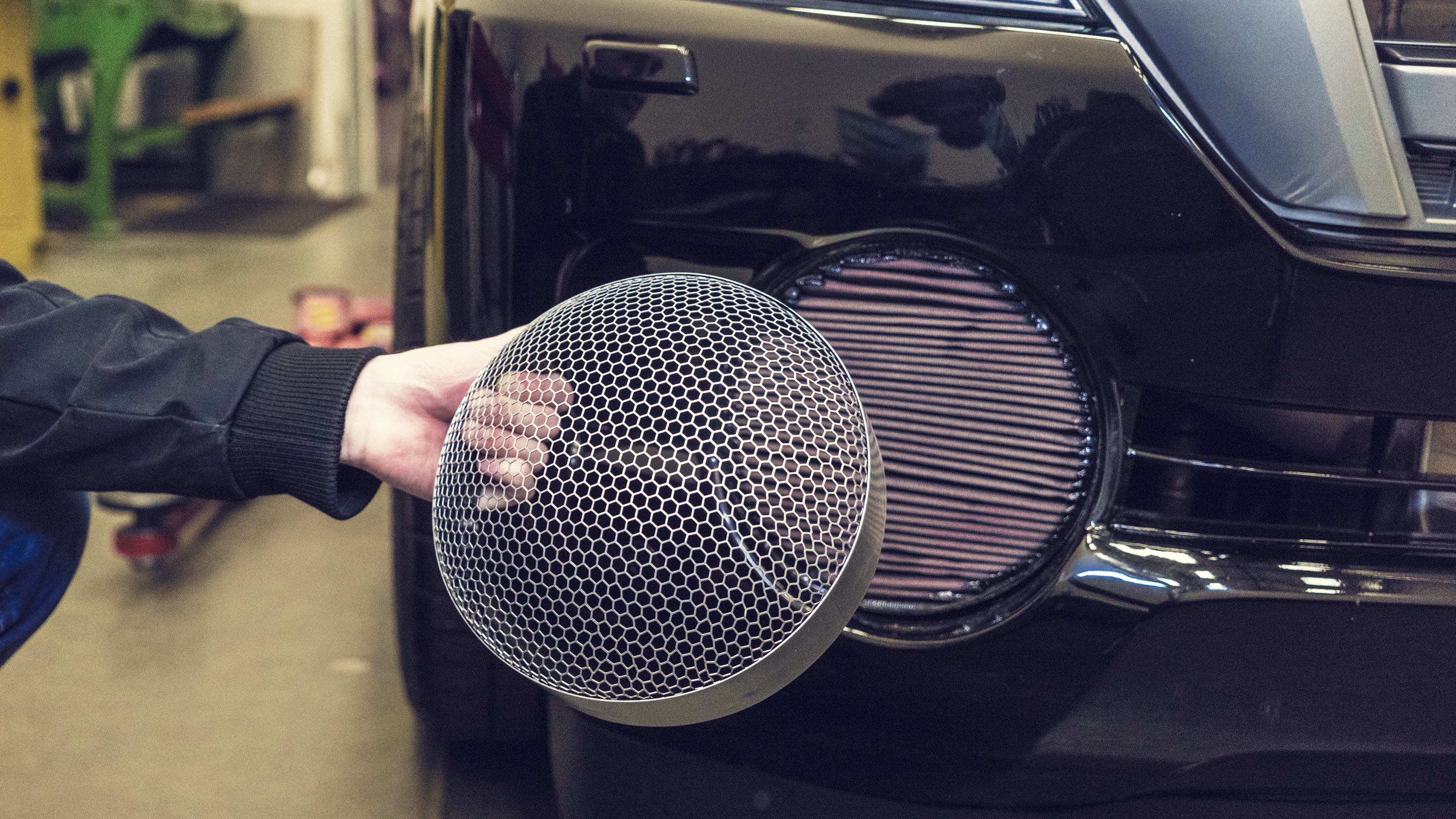 It doesn’t weigh any less, mind, even though the interior’s been trimmed down and the back seats removed. “It’s a 6000lb vehicle still. We didn’t save weight. We didn’t make a race vehicle. It’s 5960lb (2.7 tonnes) full of fuel oil and driver. That’s good for traction. The real neat thing about its tyres (Michelin Pilot Supersports) is that in their normal application, they’re run under a lot of downforce, so they’re built for weight.

“Ferraris and Lamborghinis and things… huge downforce. I looked at the tyres for the Bugatti Veyron at first, and the guys said ‘don’t even think about it’, because they’re hugely expensive. We got these Michelins totally off the shelf, I bought this one from Tire Rack. They asked how long we want to sustain high speed, and I said ‘just long enough to do the high speed’. These tyres have got over 300mph in them.” 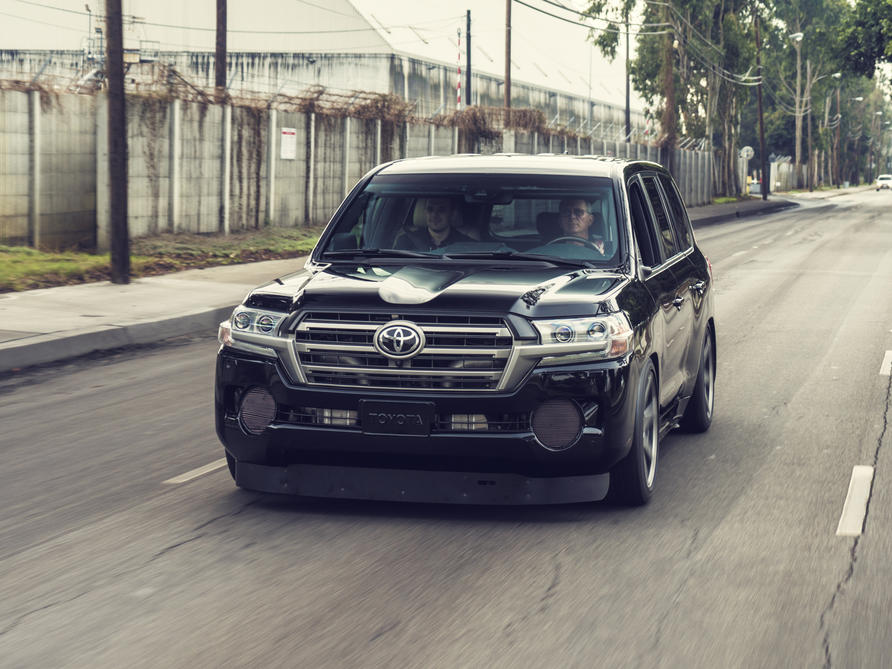 Chuck can’t wait any longer. Having talked me through his team’s handiwork for an hour or so, he’s desperate to show me what it’s all resulted in. Given the relatively subtle bodykit, he’s suggested the Land Speed Cruiser is a sleeper. When he starts up that V8 – the ignition taking a short while to catch, before the warehouse practically falls down around us when all eight cylinders fully kick into life – I conclude no one with a pulse could sleep with this thing around.

He takes me on his regular test route, essentially a rectangle around the block of this workshop, and it’s all on public roads. Naturally, he keeps things nice and mellow, though the engine is still too loud for any flowing conversation.

“If I go down this street too fast, that police car over there might turn around and follow, so I’ll just try to be a little careful here,” he bellows over the noise, as the engine idles at a stop light. Just as it creeps out of view, the lights change, and Chuck demonstrates a reasonable amount of first gear. On cold tyres, it sends the Land Speed Cruiser into a powerslide.

Relaxed as anything, Chuck counter-steers and changes up to second, some way short of the red line. Bloody hell. I didn’t think a 50mph limit on the roads of an industrial estate could provide any inkling of the pace on offer here. Once I regain my faculties, I realise I was wrong. “You can see why I didn’t want that policeman to turn around!” he chuckles. “If we could have accelerated in second gear, it would have really blown you away...” 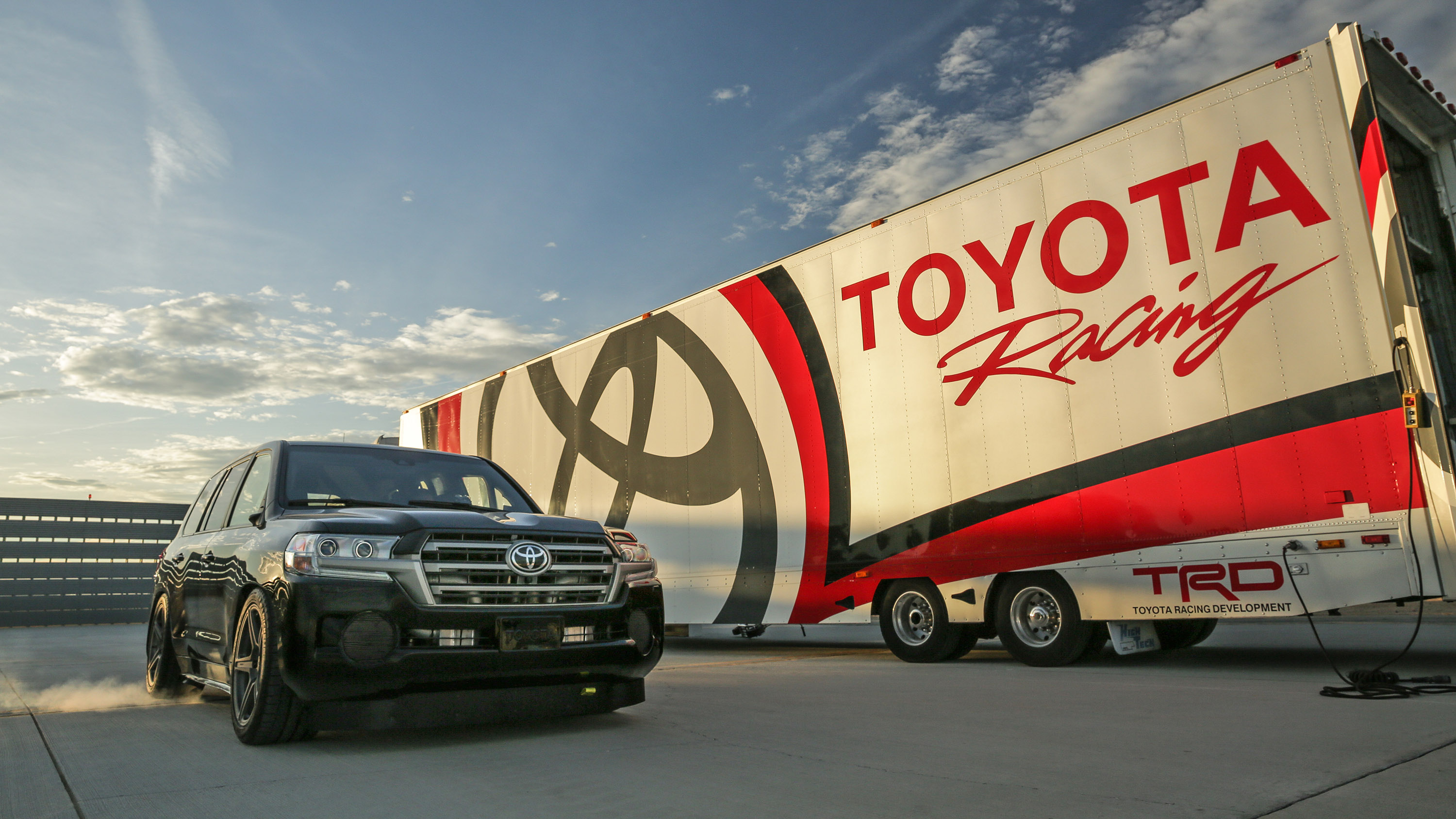 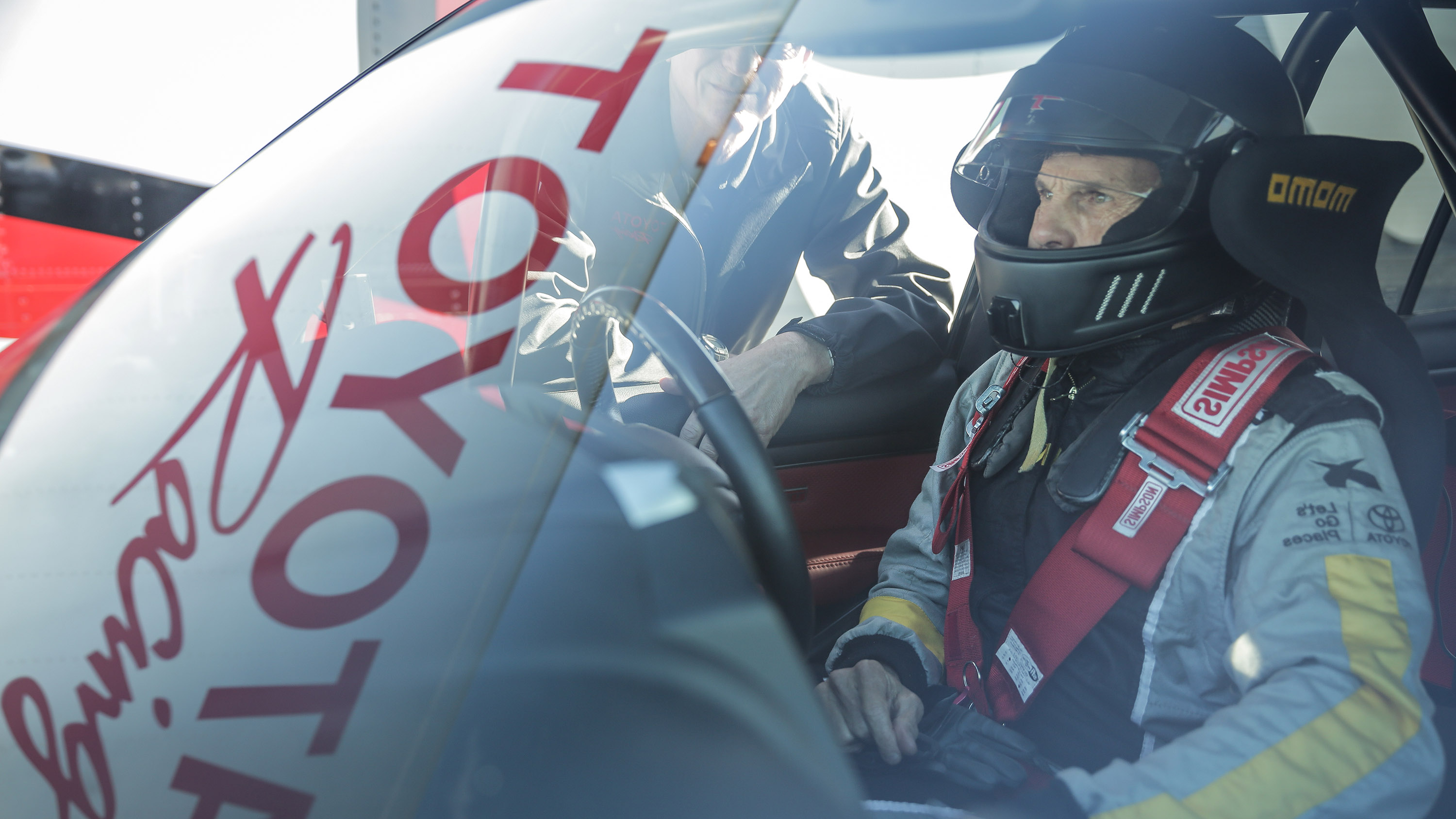 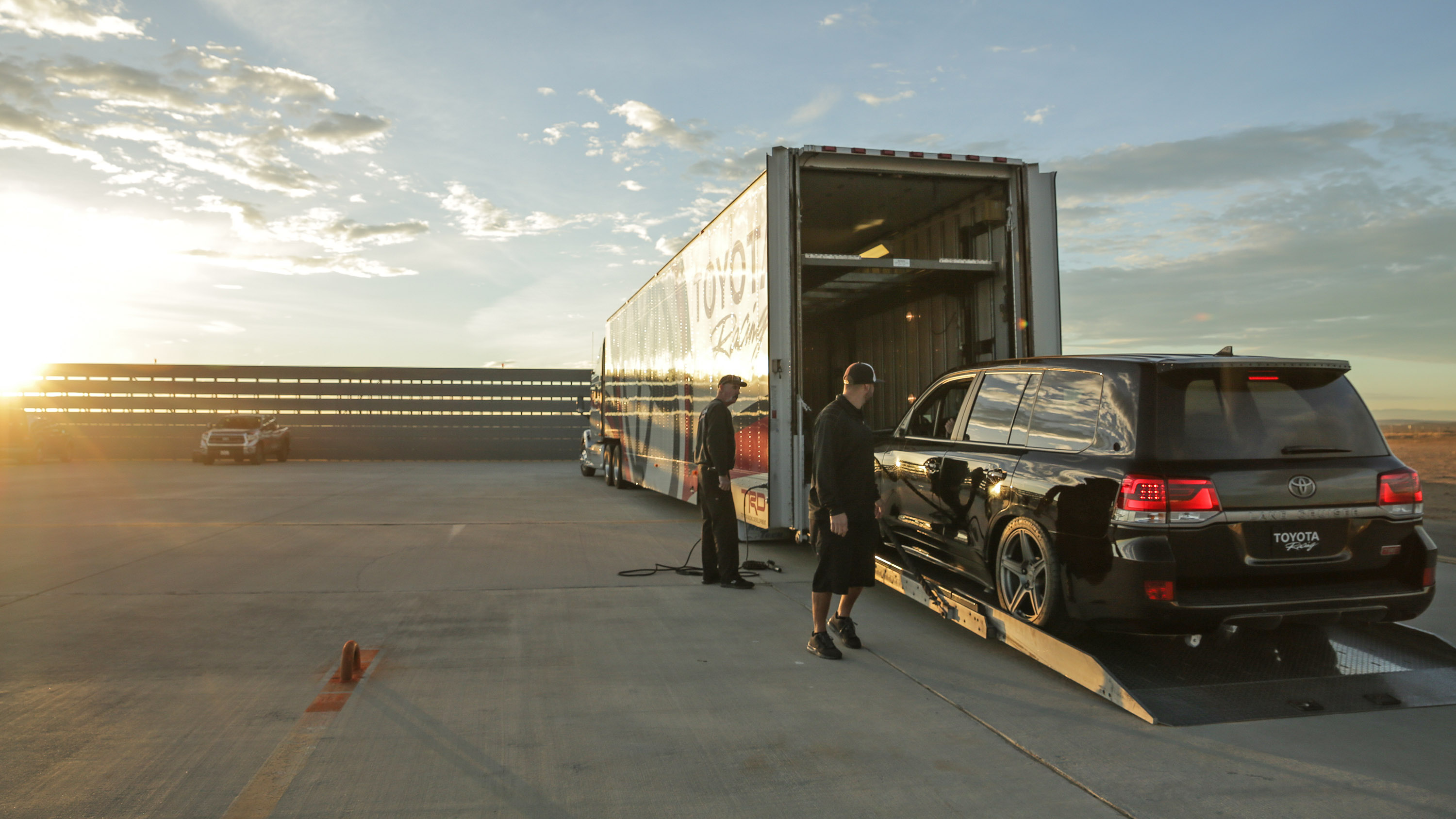 Fast forward a couple of months and Chuck’s pride and joy is at Mojave Air and Space port. Because when you need a length of tarmac large enough to get a 6000lb car the edgy side of 200mph, you need somewhere designed for space travel…

The runway is 2.5 miles long. The team has split this into 1.5 miles for the Land Speed Cruiser’s acceleration, and a whole mile for braking. Racer Craig Stanton is the driver tasked with ‘warming up’ the car ready for its record attempt. 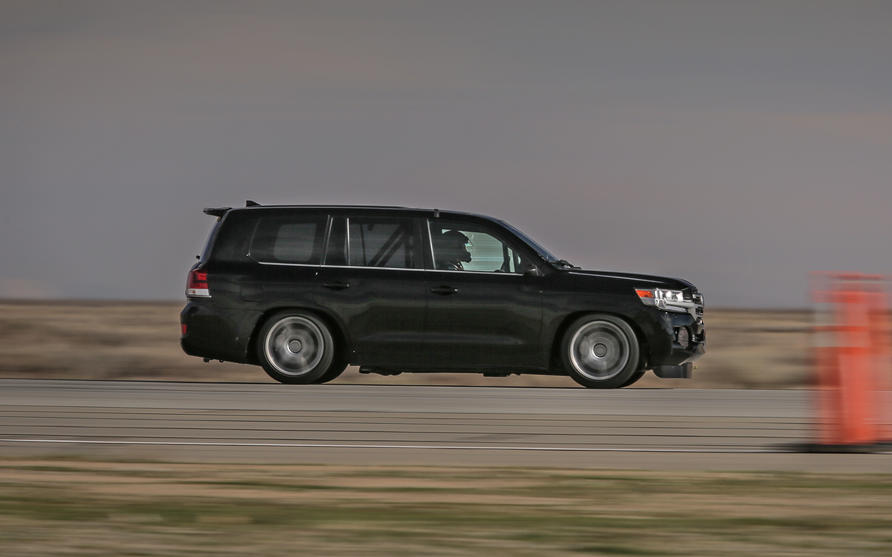 “The first time I drove it was all-wheel drive and super stable. Then it was turning to rear-wheel drive and I was thinking ‘how’s this going to work? Is the back end going to step out with all that power, will the back just want to pass the front?’

“Then at our proving ground it was hitting almost 190mph! I could steer it and change lanes; 6000lb with a bit of aero, and it didn’t do anything funny or strange or out of character. And once you get onto the straightway at 190mph you have a head start.”

A good confidence booster for topping 211mph at Mojave, then. “Our objective is 220mph. I’m thinking with a couple of mods we can go 230, 240. I’m just worried about the other end, knowing we’ve got enough space to slow down!”

With an almost movie-like plot, the team’s chance to top 211mph doesn’t come until the very last run of the day, with only a small amount of the Land Speed Cruiser’s ethanol/fuel mix left. It’s fair to say the 26-gallon fuel tank has been emptied several times in the run up to its run. 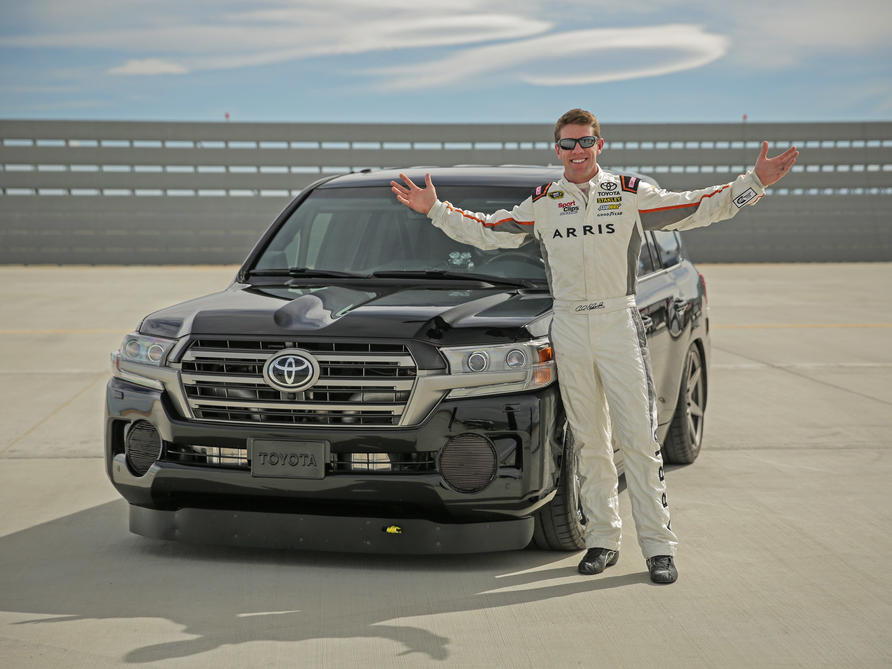 The record run’s stunt pilot – recently retired NASCAR driver Carl Edwards, pictured right – spookily sets 211mph on his first run, with barely an inch left for slowing the big Toyota from any higher speed. Which is where having a power figure so short of the engine’s limits suddenly seems a very good idea. With the boost pressure of the turbos raised, power can edge up from 1900bhp and Carl can hit a higher speed earlier. And he does exactly that, recording 230.02mph with braking room still to spare. It’s a script worthy of Hollywood.

Save for the slightly imperfect ending, because there’s no actual place in the record books awaiting Toyota. “Initially the team wanted to set a world record for the fastest SUV on planet earth,” says Dan Gardner, a Toyota spokesperson. “Guinness had some different ideas about definitions of the word SUV around the world, though, and they weren’t willing to recognise the category." It's also worth pointing out that while you can buy a 211mph Brabus, you can't buy a Land Speed Cruiser.

“But we thought ‘let’s still do it by ourselves and record the data’, we still want to say that this is the fastest. Lots of people can’t believe we did this, especially for such a large company with liability to think about. There are still a tonne of people out there who want to do things that are inspiring, exciting and innovative.”

Chuck and his team really did do it, though. The final word must go to the man behind the wheel at the exact moment they did, racing retiree Carl Edwards. “At 225mph, the thing was wandering a little bit. All I could think was that Craig said, ‘No matter what, just keep your foot in it,’ and we got 230mph.” What a way to fill his newfound free time, eh? 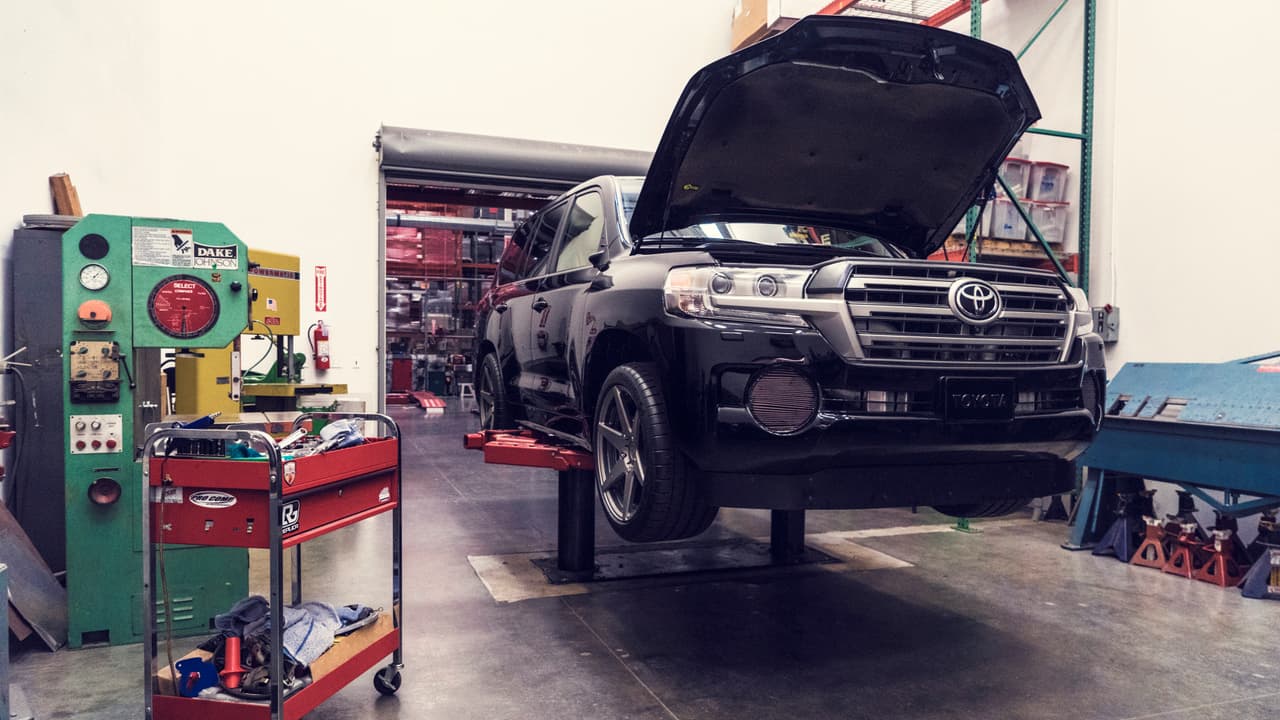