This restomod Range Rover Classic costs £95,000. Is it worth the cash? | Top Gear
Advertisement
British

This restomod Range Rover Classic costs £95,000. Is it worth the cash?

An old Rangey for the price of a new one? Ollie Marriage takes a drive

Nor is a Singer Porsche, or an Eagle E-Type, if you approach it that way.

So it’s another of these old-new projects? 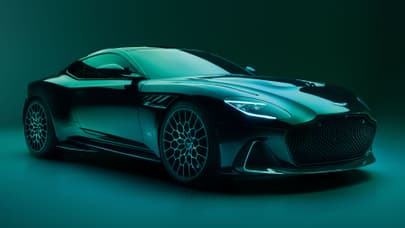 Farewell, DBS: this is the Aston Martin DBS 770 Ultimate

But also not like an original: engine bored out to 4.8 litres, redesigned suspension, much faster steering rack, LED headlights and more.

The work is done by Kingsley, based near Oxford. Proprietor Damon Oorloff has a ‘thing’ about original Range Rovers.

“I love buying them, but I hate selling them,” he says. So he basically hoards them. To the tune of about 180-190 cars. Really.

What you have done to your Rangey is up to you. You can just take yours for an MOT, or you can bespoke create your own dream Range Rover from the ground up. There’s a car in the lot sporting a 7.3-litre Chevy engine, another undergoing final testing with a modern six-speed ZF auto.

Could I have mine with the supercharged V8 from the Range Rover Sport SVR, then?

The exact question we asked. The answer’s no. It doesn’t fit. Apparently an Aston 6.0-litre V12 does, though…

What else do they do?

A lot of the drivetrain work is done for Kingsley by JE Engineering (this one started out as a 3.9, but has been bored and stroked out to 4.8 litres), but that aside, almost everything is done in house: chassis rebuilds, bodywork repairs, paint, interior trim, suspension.

Give them a car for a full overhaul and they’ll start by separating body from ladder chassis (ten bolts hold them together), and then going over the metalwork with a fine toothcomb. All rust is cut out, repaired and then everything is treated, sealed and painted until it’s far better than it ever was when it first came out of the factory.

The attention to detail isn’t quite to Singer levels, but then neither are the prices – as I said this is more a good updating than a full reimagining. But as with all cars born of a personal passion rather than a business plan, it comes across as a car subtly and thoughtfully revised to be the best it can be.

I bet it doesn’t drive that well.

You’d be surprised. The suspension mods are considerable and include not only wider track widths (sits well, doesn’t it? Good stance…), but also a thicker 25mm anti-roll bar, new springs and dampers, different brakes and a steering rack that now has 2.4 turns between locks rather than 3.9.

If you really want to sharpen things up, Oorloff will also fit a secondary damper to the rear axle from an entirely new mounting point, further reducing unwanted movement.

I’m not sure it’s needed. This car doesn’t have it and the ride is surprisingly pliant, yet also well controlled.

What, a bang-up-to-date driving experience?

Not exactly. It rides better than most modern cars for one (you can thank the 235/70 R16 Pirelli Scorpion Verde tyres for that), but the cabin takes a bit of getting used to. It’s the thin A-pillars that skew your perspective and initially make you feel slightly vulnerable – especially considering that the bonnet is roughly at knee level when you’re sitting inside.

The scuttle is low, so loads of lovely light inside, but there’s a curious driving position, short seat squab and no steering adjustment. It’s how things were…

But then so’s the V8, and that’s just wonderful. The kind of lazy, rumbling, burbling motor that just makes you smile and laugh and not care a jot about the abysmal fuel economy. With 270bhp and 300lb ft propelling 1880kg it’s not fast fast, but it’s rapid enough to make you very glad that the brakes and suspension are up to speed.

Probably in the order of eight seconds to 60mph. Would be quicker if it had a different gearbox. That’s the one change I’d make if this were mine. The four-speeder is properly old-school and slurs its way around, kicking down only under severe provocation and generally behaving a bit more like a CVT.

Some might see it as part of the charm, and as I say, you can make that decision for yourself. What impressed me more was the lack of bodyroll and confidence I had in the Range Rover’s handling. I hadn’t expected that.

The steering is remarkably direct, almost pointy in fact, and it corners with grip and far more poise than it ever had when new. Good steering feel, too, and the brakes are more than up to the job. Sure, there’s a bit of bobble on some surfaces, but on the whole this is a car you could drive every day if you so chose. You’d drive it for the noise alone.

Not old and rubbish, then?

Far from it. It cruises with much less fuss, wobble and noise than an actual old Range Rover would and gets itself down a B-road at roughly three times the speed. It’s an old car that you can drive like a new car – which is what the driving experience of a restomod is all about, isn’t it?

There’s a tight turning circle, the steering isn’t cripplingly heavy, the view out is great, and this one even has a 1200 watt stereo. Most of that hides away in the side of the boot, which is surprisingly big, and doesn’t open electrically. Good. There’s a decent amount of space in the back. And seatbelts.

Only the passenger seat tilts forward to allow access to the back, and it’s from a time before we cared about cupholders and cubby space.

That said, there’s a shallow dish on the dash top that’s almost precisely the dimensions of an iPhone 6. Very thoughtful of the men from Solihull to foresee that one so far out.

OK, so how much for this newly oldened Range Rover?

This one was up for £94,750 (it was sold the day we drove it). Yep, that’s pretty much the same money as brand spanking Range Rover Sport SVR, which is bigger, faster and all the rest.

But if that’s the comparison you’d draw, then the Kingsley probably isn’t for you. Think of it as a British design icon bespoke made to your requirements. Because it is iconic, the original Range Rover, and this is a sympathetic and convincing update, that keeps 95 per cent of the visual appeal (I’m not sure about the LED headlights on this particular car), while enhancing the driving ability.

2000 hours of work all told, Oorloff reckons. I’d be surprised if a car ever rolled out of the factory in as good nick as this. It feels very complete, thoughtfully and exactingly executed, done with care by people who really know what they’re about. That’s what you’re buying into.