Rolls-Royce Cullinan SUV: this is it | Top Gear
Advertisement
British

Rolls-Royce Cullinan SUV: this is it

Well, it had to happen, didn't it? Prepare yourself for RR's 'high-bodied' vehicle 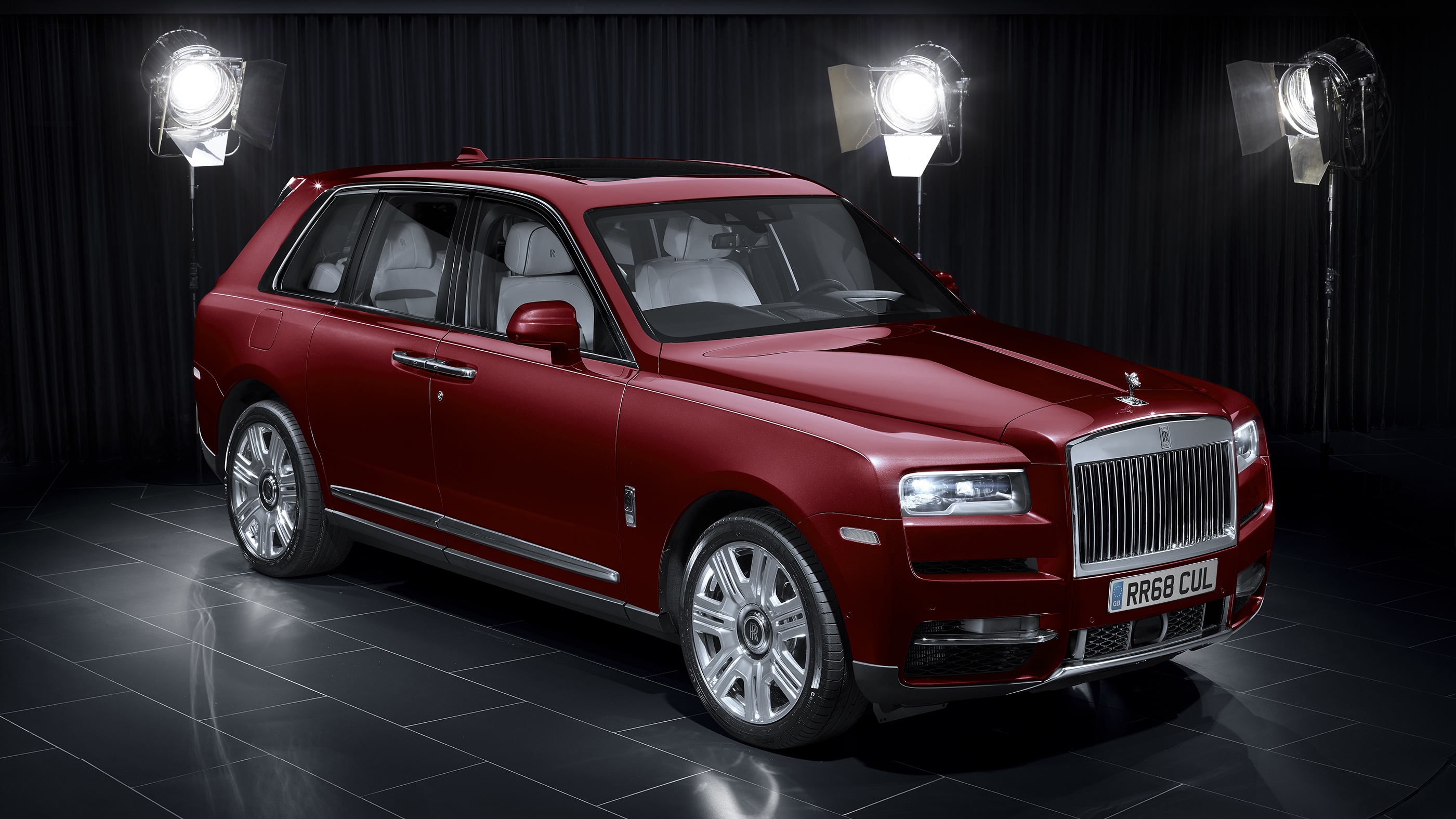 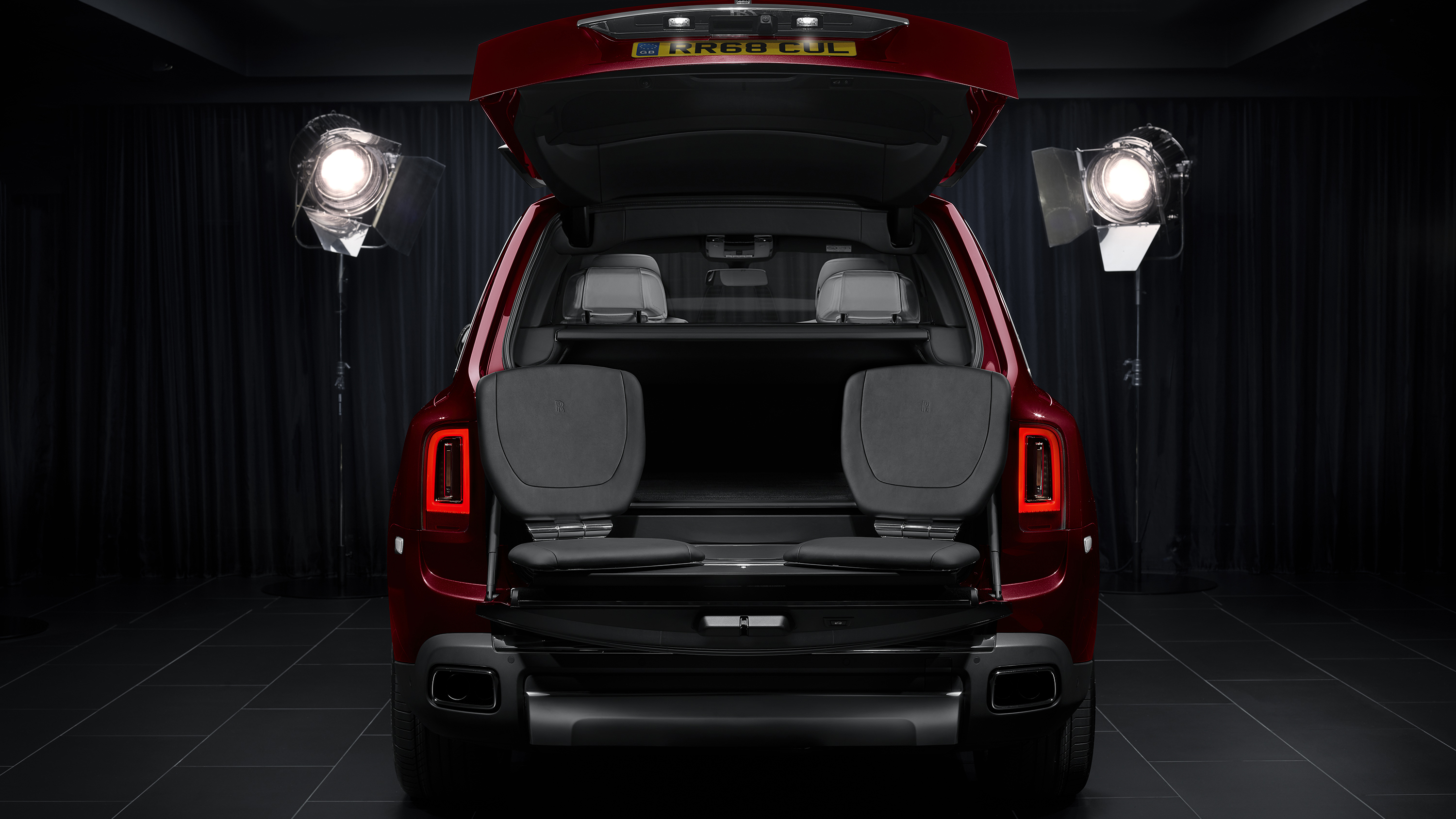 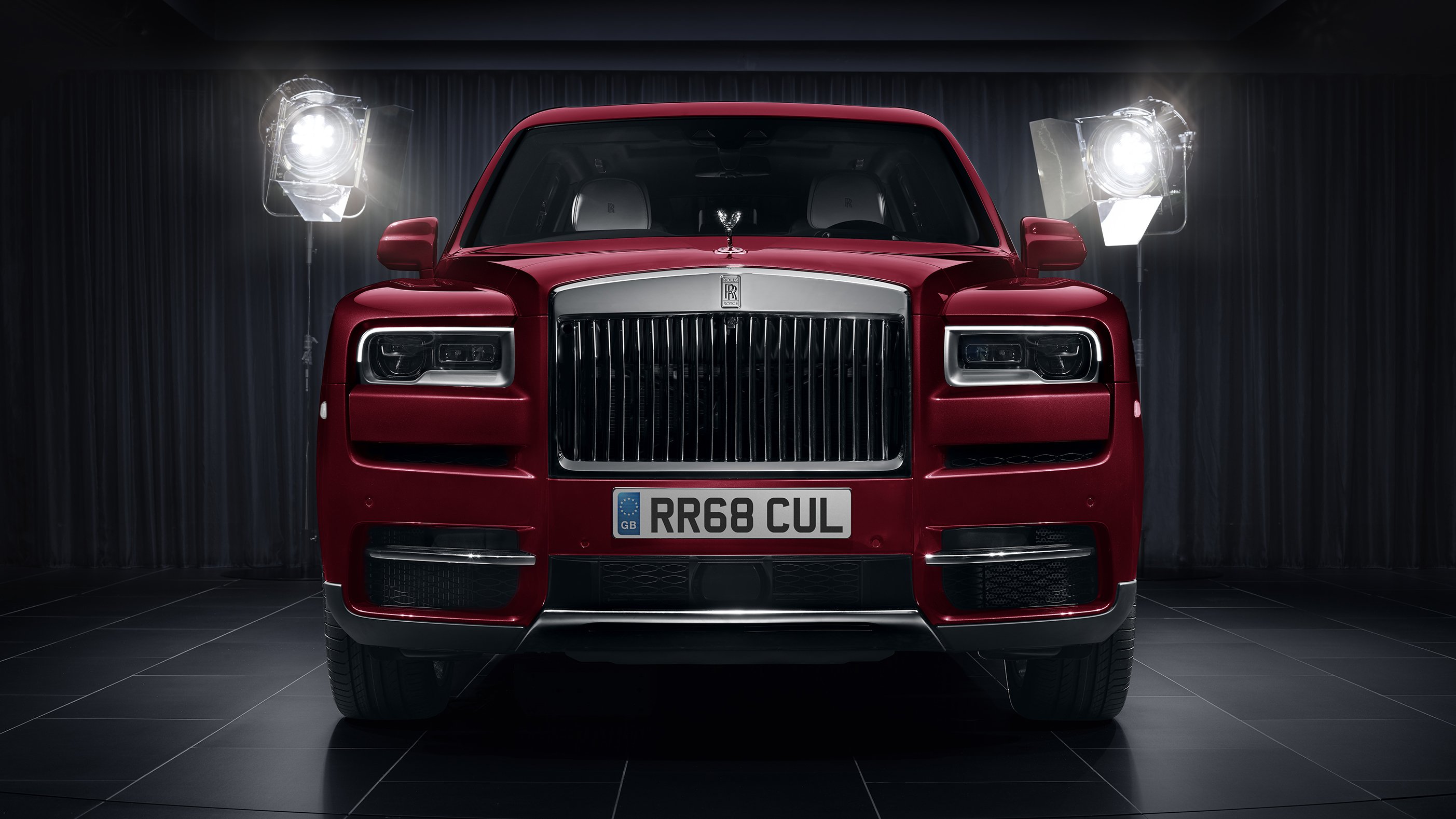 Whatever your response to the Rolls-Royce Cullinan, you can’t fault the company’s credentials. Prestige players crave authenticity above all else – it’s a valuable USP, particularly in China – and rather than being fashionably late to the SUV party, Rolls-Royce can legitimately claim to have been a pioneer. With the ultimate celebrity endorsement.

“More valuable than rubies in the desert,” Lawrence of Arabia noted of his nine-strong fleet of Rolls-Royces, modified to handle the brutal theatre of war he operated in. His personal car was called Blue Mist (he’s said to have commandeered it from its owner after spotting it outside a Cairo nightclub); others were open-bed tender vehicles, and several were armoured. During his legendary campaign against the Ottoman Turks, none ever broke down.

A century later, Rolls has different reasons for being in the Middle East, newly armed with a high-minded manifesto for its all-terrain ‘high-bodied’ vehicle. "Our answer to history, to the visionaries, adventurers, explorers and those who believe in the supremacy of liberty is the Rolls-Royce Cullinan,” CEO Torsten Müller Ötvös says. (Rather than rubies, the name references the biggest rough-cut blue diamond ever found.)

This is a car that doesn’t just redefine the meaning of the word utility, it dismantles it. Let’s start with its structure, which evolves the so-called Architecture of Luxury that underpins the latest, and phenomenally good, Phantom. For which, read modular aluminium spaceframe, with castings in each corner and extrusions in between, reconfigured here into a form that sits higher and shorter than in its limo sibling. To the Phantom’s supernatural sense of calm, the Cullinan adds space, arguably even greater presence, and all the soft- and hardware needed to send it down the road and up a mountain with imperiousness. Versatility, too, but that’s far too plebeian a concept to fit the Rolls vernacular. ‘Effortless Everywhere’ is the elevator pitch on this one. The supremely capable bodyguard to the Phantom, if you prefer.

The new chassis is 30 per cent stiffer than the Phantom’s, an improvement that helps the transition to giant 4x4. “The drivetrain system we engineered for the Cullinan had one key job to do,” engineering project leader Caroline Krismer tells TG during a clandestine preview at R-R’s handsome Goodwood HQ. “We began with a simple principle, which was to bring our cars’ ‘magic carpet ride’ to other terrains, while delivering class-leading on-road behaviour. This platform and the high body as a basic skeleton gives great comfort. The application of the powertrain is very Cullinan-specific.”

There’s a new double wishbone set-up up front and a five-link rear axle, with a next generation self-levelling air suspension whose quick-thinking electronically controlled dampers take their cue from body and wheel acceleration, as well as the ‘Flagbearer’ stereo camera system that scans the road ahead. It also benefits from 4WS, there’s a 48V anti-roll system, and power goes to both axles in a 50/50 split (it’s the first Rolls in the company’s history to receive drive to the front). The engine itself is a reworked version of the Phantom’s twin-turbo, 6.75-litre V12, good for 563bhp but more significantly 627lb ft of torque from a practically subterranean 1,600rpm. A combined 18.8mpg and 341g/km CO2 are incidentals, and only a governed 155mph top speed is quoted (Rolls owners don’t accelerate – they gather momentum.) 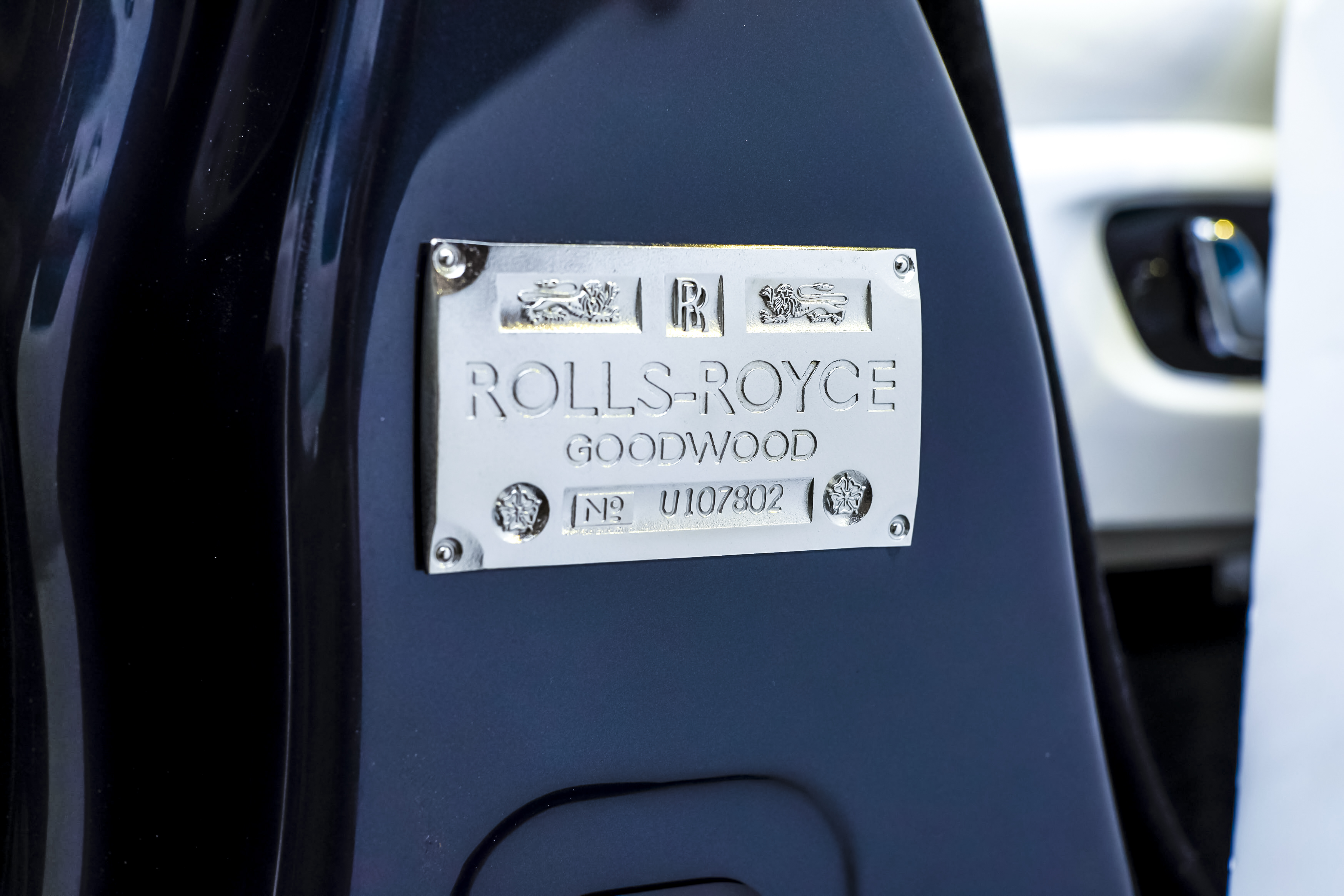 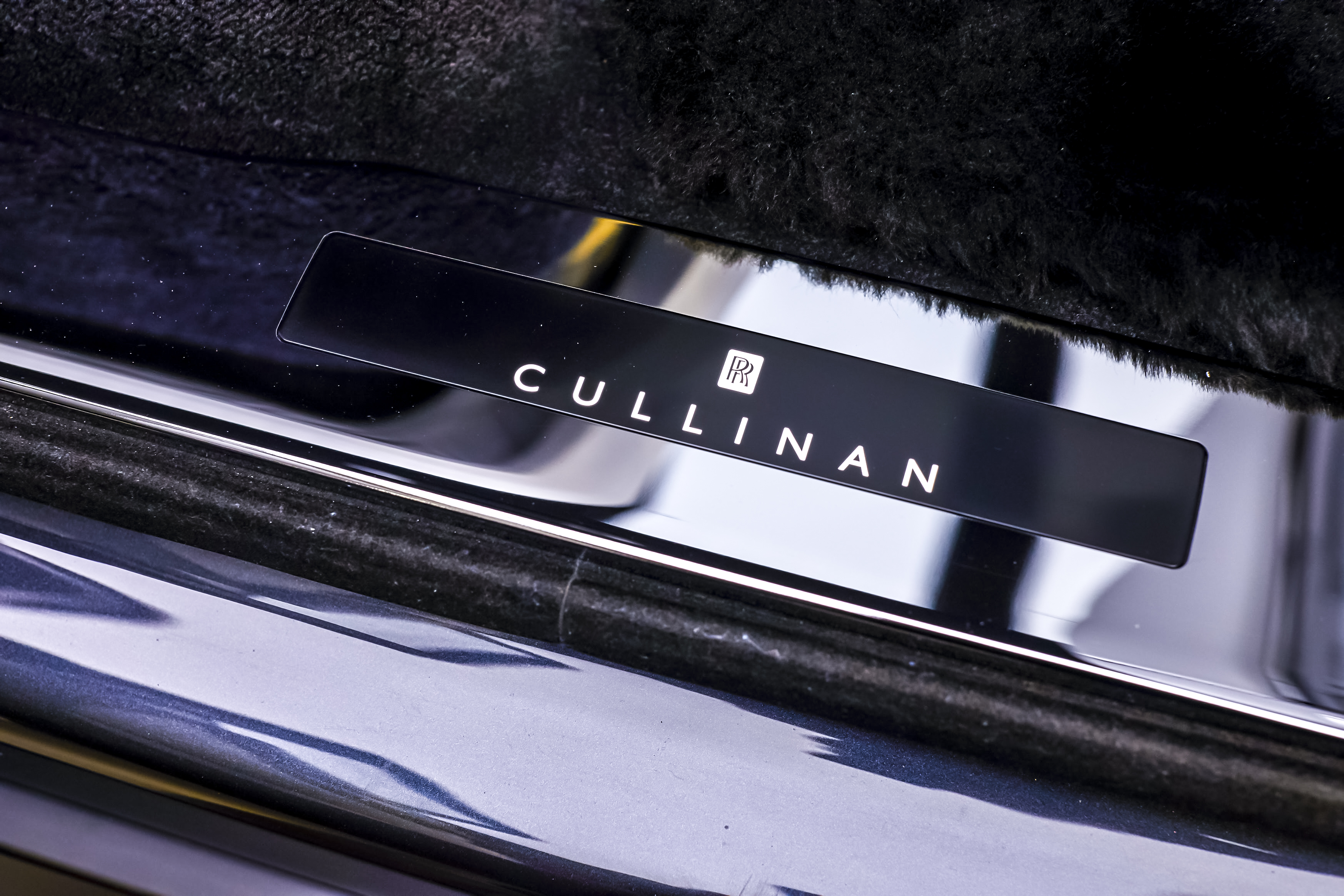 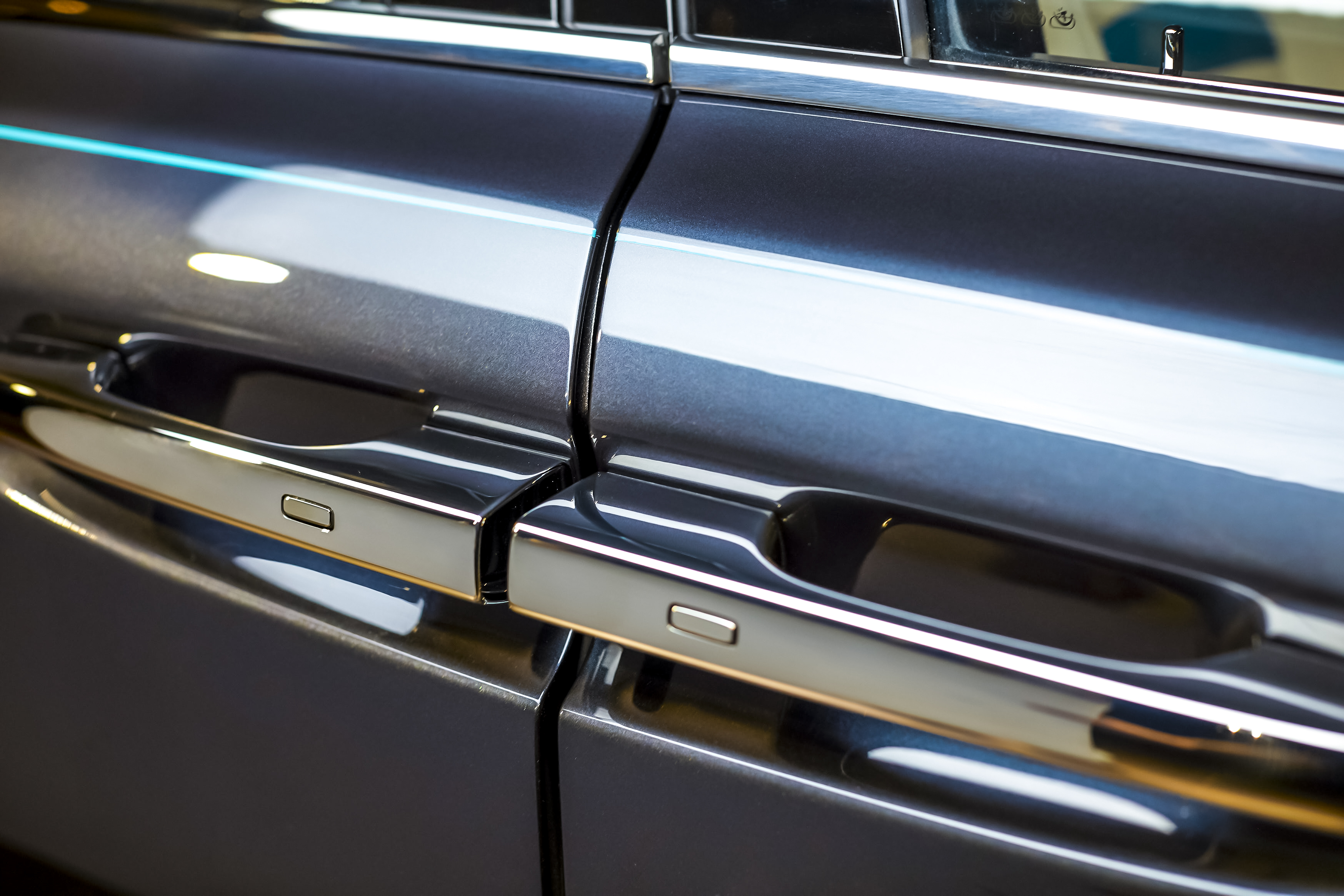 The transmission is the silken, imperceptible ZF 8spd automatic, satellite-aided in the Cullinan (as in other Rolls products), though this time it’s not practising its clairvoyance through corners, it’s doing it on sand dunes and wherever else extraordinarily rich people like to muck around. Very, very smoothly. “What makes the car great on-road makes it great off-road, too,” Krismer adds.

The Cullinan’s adventure mode, meanwhile, is accessed via a single button – the ‘Everywhere’ button, in Rolls parlance – which works across rutted track, gravel, wet grass, mud or snow. Its wading depth is 540mm, the deepest, claims Rolls, of any super-luxury SUV (40mm more than a Bentley Bentayga). We won’t know until we try it, but the films Rolls has released online point to a car of considerable, perhaps even unexpected prowess. “Honestly, it’s amazing,” Ötvös says. And he’s not a man given to exaggeration.

Mind you, there are some width-restrictors in London best avoided (unless you plan to drive straight over them); the Cullinan is a big thing. It’s 5.3m long, 2.1m wide, and 1.8m tall, and if you happen to have access to a set of industrial scales, you’ll find it weighs in at 2,660kg unladen. During the reveal, Rolls took the unusual step of showing us two different cars, one finished in Magma Red, the other Darkest Tungsten with a turquoise coach-line. The red one leans more on the utility side – though it’s scarcely a Lada Niva – while the other ticks every box on the luxury front, including a few that will be unfamiliar because Rolls has invented a smattering of new ones. The point being, you can tune the car’s character.

The Cullinan has been a long time coming. Rolls, a touch snootily, says it was waiting for the SUV concept to be perfected before entering the fray on behalf of “those customers who will accept no compromise – the patrons of true luxury”. Perhaps they’re ready to chop in their Range Rovers now. Either way, design director Giles Taylor and his team began hypothesising five years ago. “We didn’t set out to do an SUV,” Taylor says, “we set out to define and deliver Rolls-Royce luxury in a high-bodied vehicle. We know these types of cars are particularly popular in the US, in the Middle East and increasingly in China. We envisaged an elevated luxury, fusing the comfort and opulence of our cars with that sense of surveying the vista ahead and being able to take it on. We embraced the desert. This is a car that belongs at the top of a sand dune.”

Accepted notions of beauty are redundant here – if ever there was a statement car, it’s the Cullinan – but Taylor admits that a certain gracefulness was still an important consideration

More than most, Taylor has had to develop a deep understanding of the people who buy the cars he designs, navigate their idiosyncrasies while making them comfortable with new approaches. He doesn’t do crowd-pleasers, and a certain thoughtfulness is useful when it comes to understanding his philosophy. Like the Phantom, the Cullinan is a meticulous piece of work, with rigorously finished surfaces and unbelievable presence. It’s a powerful, implacable-looking machine, whose laser headlights and vertical and horizontal lines result in a face that Rolls likens to a warrior. The bonnet sits higher than the front wings to emphasise the car’s tougher remit.

Then there’s the traditional Parthenon grille – which came in for some serious stick recently, courtesy of Aston Martin’s design director, Marek Reichman. It’s fashioned from hand-polished stainless steel, and sits proud of the bodywork here. Eleanor, the Spirit of Ecstasy retracts electrically, of course, and sits higher too, presumably so she can get a better view of the vista ahead as well. Or possibly the contents of Prada’s shop window.

Accepted notions of beauty are redundant here – if ever there was a statement car, it’s the Cullinan – but Taylor admits that a certain gracefulness was still an important consideration. Plus, this is a car aimed at a new, younger, more family-oriented and progressive demographic. “It acts on its front wheels,” he says. “There’s an energy and modernity to the Cullinan. The roofline gets faster as your eye travels across it, and there’s no sweetness to the jewellery.” There are strong metal touch-points, and big protective spears above the sills that also break up the body side volume. The Cullinan has huge ‘coach’ doors. Finally, there’s a pronounced rear ‘bustle’, which references the Thirties Rolls D-Back. Back then, one’s chattels travelled separately in a trunk; you should never sit with your luggage or your dog, says Rolls. To which end, an interior glass partition can be ordered sealing off the boot area from the cabin. Poor Fido.

Elsewhere inside, the Cullinan adds functionality to Rolls’s spectacular cabin ambience. There’s structure and symmetry, with metal pillars connecting the centre console and fascia, and water-resistant ‘box grain’ black leather on the dash-top, doors, and even the back of the key. (The Cullinan drops 40mm as you approach it for elegant access and egress.) The instrument dials have beautiful graphics, the power reserve gauge is present (no rev-counter in a Rolls), and the central multimedia display is now a touchscreen. There’s a vast suite of assistance systems, including a four-camera system with panoramic and helicopter view, and an industry-leading hi-res head-up display. Rear passengers sit higher than those in front, either in lounge configuration or in sumptuous individual chairs (you can have a cool box and whisky glasses with that set-up, and Lord knows what else).

Behind the split rear tailgate, the rear compartment can be specified with a Recreation Module, a motorised drawer specifically designed according to the owner’s preferred pastime, or you can order the Viewing Suite, which stores an ingenious pair of folding leather-clad rear-facing seats and cocktail table in a special cassette. This is how the top one per cent of the other half live. And sit.

Whether you actually like the Cullinan or not is irrelevant. Rolls-Royce operates in a highfalutin world, and its cars are engineered to erase the barriers that obstruct lesser vehicles. If the Phantom pushes the outer reaches of what’s possible, the Cullinan lets you physically access them. A diamond in the desert.