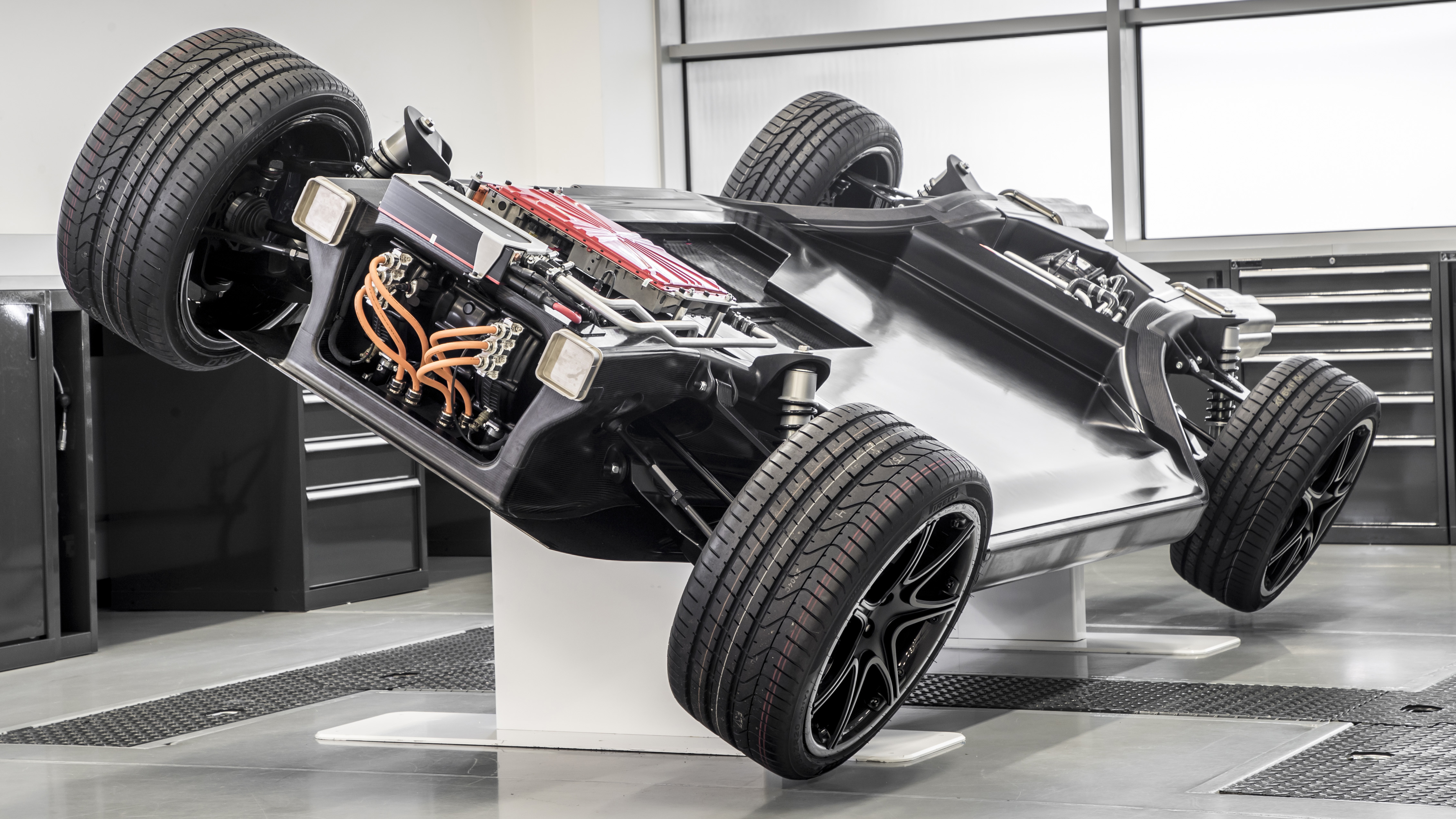 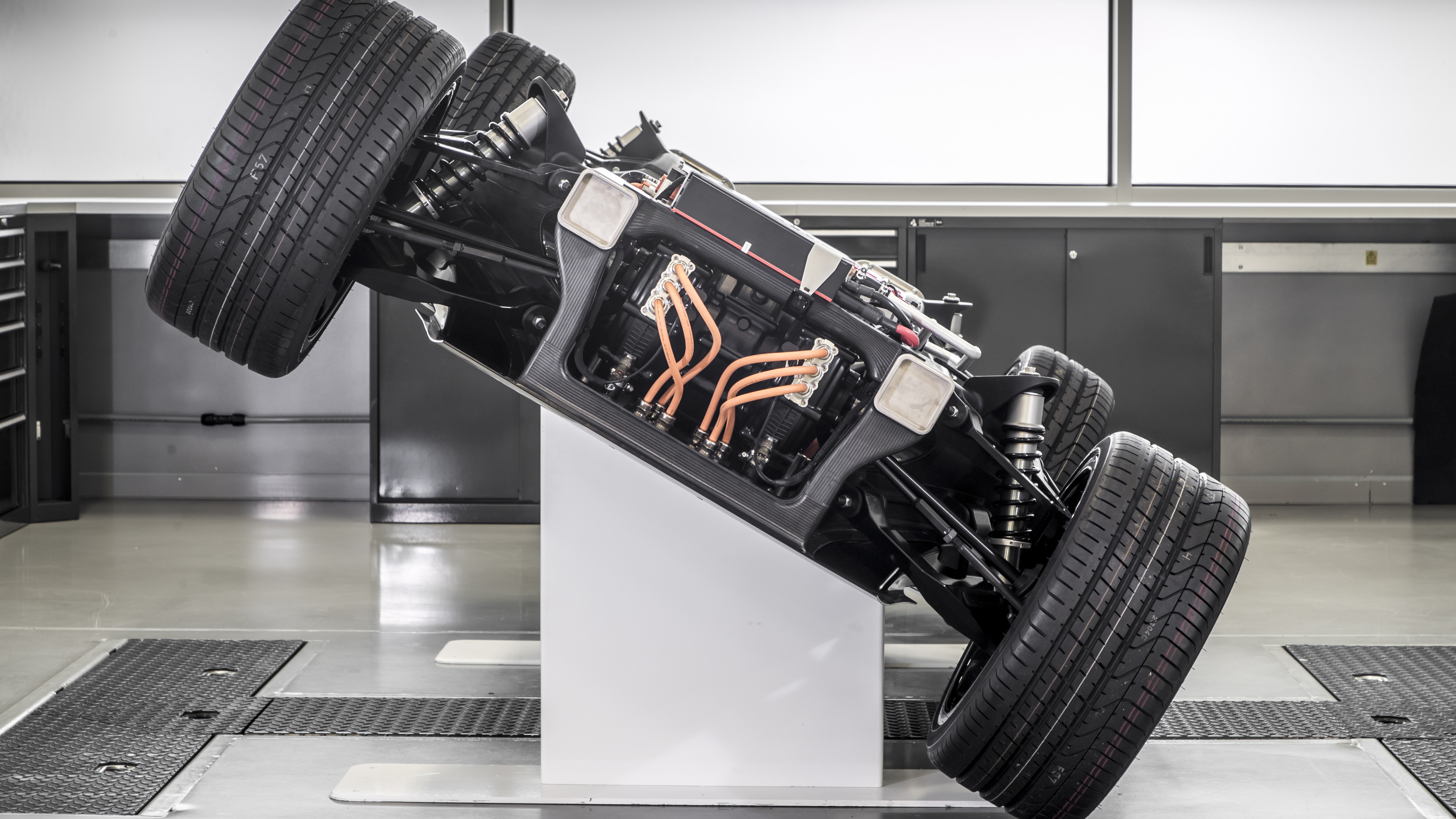 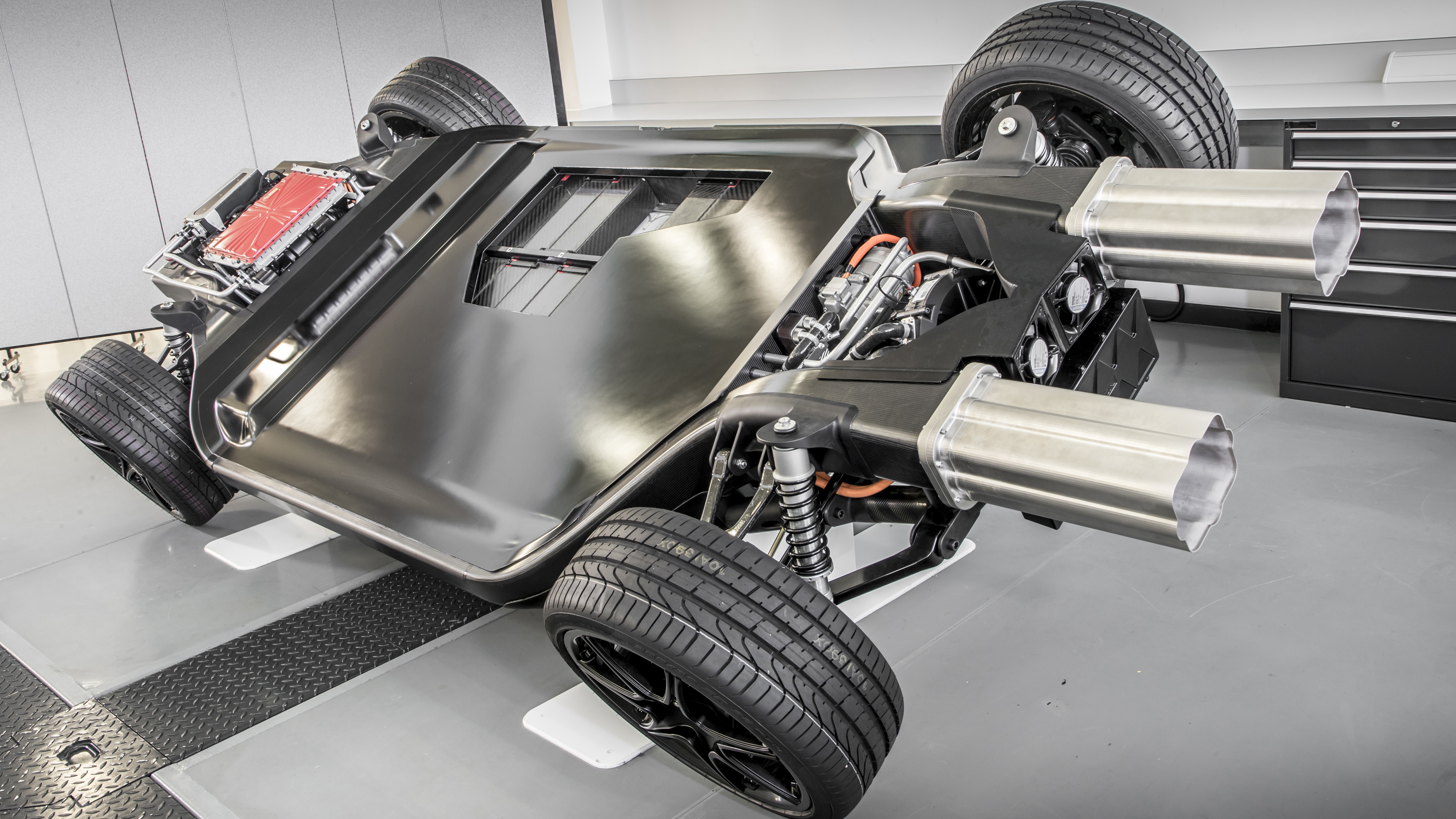 A few weeks back we showed you a rolling chassis for electric cars, designed by Williams Advanced Engineering. The spec looks ballistic: high-end carbonfibre structure, 652bhp torque-vectored 4WD. It even has a racy name: FW-EVX. A lot of you clicked, many of you commented and asked questions. So we've been to get a closer look and meet Williams Advanced Engineering's technical director Paul McNamara.

Williams has wrapped up its expertise from designing and making carbonfibre racing cars, and the batteries for Formula E, into the FW-EVX. It's a rolling chassis that could be used by an existing or start-up car brand. The end result should be an EV that would have a combination of power, range and light weight that none of the big players have managed or expect to manage.

McNamara says Williams could build a run of 100 or so of them using its carbonfibre, machining and battery workshops. Those facilities normally lie quiet in summer, having spent the winter making parts for racing cars.

The weight is the really impressive bit. What you see here, the chassis with batteries, motors and electronics, even the wheels and tyres, is 955kg. Williams says it can do a vehicle the size of a BMW M4 for 1750kg.

That's with three motors, giving a total power of 480kW, or 652bhp. Which is more power than a top-end Tesla Model S P100D, which has an extra 400kg to accelerate.

The gains come from system integration. Like a racing car everything has been designed to work together. The main sills don't only co-depend on the battery modules for structure, they cool them too.

Because it's light, it's efficient, and so Williams says it can do 343 miles on the official test cycle with just an 80kWh battery. That's usefully beyond the '500km' [312 miles] that most European premium makers are aiming at.

So far, these claims are calculations. But given Williams's boffinry at simulation and aerodynamics, we can assume they're not just back-of-an-envelope optimism but rigorous numbers.

Battery modules aren't only heavy, they're expensive. The FW-EVX needs less battery for its range. Which goes much of the way to offsetting the cost of all the carbonfibre.

On each side of the car, carbonfibre members run almost the whole length, supporting the suspension then flaring out to the sills. Most electric platforms build a solid and heavy aluminium box around the battery. The Williams car wraps each one of its 38 battery modules in relatively cheaply made carbonfibre boxes. That makes them resistant to crash damage, so the the sills don't need to be as heavy as they don't have so much protective work to do.

But the sills also do another duty: they're air-to-water radiators. Inside them are light aluminium sections with wavy fins. A cut-out section in the photos shows what's going on. Air is channeled in from the car's front crash members (the shiny aluminium things that look like exhaust pipes if you didn't realise which way the car is pointing), and down the sills. Those finned sill members contain water channels, cooled by the passing air.

From one sill, that water is fed under the battery modules to cool them by simple physical contact. From the opposite sill, the water cools the car's power electronics.

Weight drops again because no water is piped through the 'dry' battery modules, only the single large plate beneath them, and there is no separate radiator. And by the way, in other EVs the battery modules are wired into an electric car's central computer to report temperature and charge. Here that's done wirelessly, so again it's a simpler assembly.

Williams doesn't make electric motors, so it decided to use the best stuff off-the-shelf. McNamara chose ultra-compact, light disc-shaped axial-flux YASA P400 motors. Each is 160kW, and there are three: two at the back and one at the front. The rear ones drive through an Xtrac transmission that keeps the two drive sides separate, so there's torque vectoring.

McNamara says the chassis would sit under a pretty expensive car: "Maybe £150,000." But that's not a lot more than a top-end Tesla. As it is, the size is about BMW 3 Series, but an extra row of cell modules in the battery, and longer sills, would take the wheelbase up to 5 Series size.

The skateboard is stiff enough to support a cabrio body. But is the floor low enough for a proper sports car? McNamara's team have thought of that. They can make half-height battery modules under the seats to lower the driver's bum, and have a taller tunnel up the car's spine to reclaim space for the rest of the battery.

So if anyone fancies becoming a car maker, and doing an all-electric 4WD supercar with solid-gold race expertise underpinning it, they could probably do worse than emailing Williams.