Could Audi enter F1 to save Red Bull? | Top Gear
Advertisement
Formula One

Could Audi enter F1 to save Red Bull? 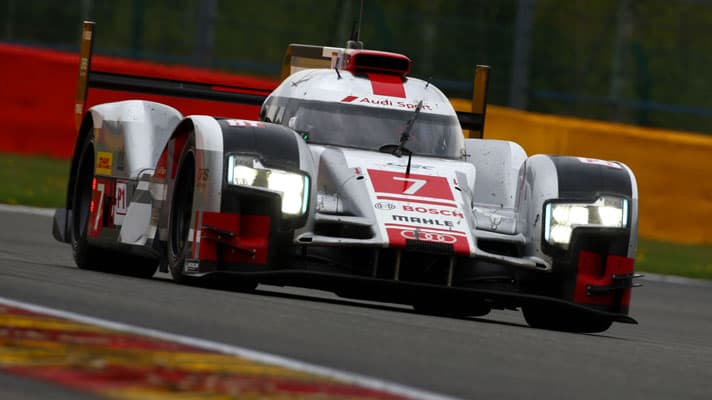 Red Bull F1 is in crisis. Crowned world champions for the fourth time running only eighteen months ago, the Milton Keynes outfit currently lies 172 points behind Mercedes in the constructors' championship. After only five races.

Red Bull's decline has coincided with the dawn of the V6 turbo hybrid era, a technology challenge only Mercedes have really mastered so far. With Renault - who supply Red Bull with their engines - struggling to catch up, Red Bull owner Dietrich Mateschitz said before the Spanish grand prix that his team may quit the sport if a competitive power unit can't be found.

Cue embarrassing in-fighting, and accelerated production at the rumour mill.

Both Christian Horner and Adrian Newey have publicly criticised the Renault engine, with the latter describing it as "quite a long way behind" the competition. Renault chief Cyril Abiteboul hit back, saying, "It's hard to have a partner who lies." Ouch.

The attitude of Red Bull's hierarchy suggests they have lost faith in the French company's ability to build an adequate power unit. Rightly or wrongly, an extended period running in the F1 midfield is of no interest to Mateschitz, hence the rumoured search for a new supplier. Or further still, a new owner.

... possibly. Audi boss Rupert Stadler this month admitted that an F1 entry is being explored, but several historical factors have blocked the German manufacturer's path to F1 before now, not least the involvement of Ferdinand Piech. The former chairman of parent company VW Group has had a difficult relationship with Bernie Ecclestone in the past, both personally and professionally.

But Piech lost control of the VW empire after a boardroom power struggle last month, and with Bernie Ecclestone going as far to say he'd be "happy to step down" if it allowed Audi to join F1, their route into the sport has never looked more open.

Having said that, Bernie's flirtations with leaving the sport should be taken with a very generous pinch of salt: F1's majority shareholders - private equity firm CVC Capital Partners - would likely sell their stake if the right buyer was found. Ecclestone has not ruled out that buyer being him.

If his involvement remains a problem for the VW Group, they will not be encouraged by the fact that the supremo's ‘exit' might actually be anything but.

Still, a full takeover of Red Bull Racing - if Audi does decide buy the whole team - would be an appealing way into the sport. The former champions already have state-of-the-art facilities at their base in Buckinghamshire, which Audi could expect to run for about £100m per year, give or take a few quid.

It sounds like a big sum, but it's a drop in the long-range fuel tank compared to Audi's current value of more than £8bn.

With Red Bull already pocketing £45m each season thanks to an agreement with Formula One Management (the second largest share behind Ferrari), engine development costs could be heavily subsidised if required. Audi would also have the option of supplying those engines to other teams to make back more of their annual outlay.

Above all, though, the most telling factor is Audi's participation in the World Endurance Championship. They've won 13 of the last 15 24-hour races at Le Mans, but their continuation in the LMP1 class gets harder to justify every year they dominate.

Audi's first couple of Le Mans victories with their groundbreaking diesel engine were recognised as outstanding achievements. Today, though, Audi are expect to win: the rare occasions they don't generate more headlines than when they do.

With sister brand Porsche running in the WEC as well, the lure of competing in F1 - with its greater exposure, financial and political return - may prove too great to resist for the German manufacturer. No other VW Group brand operates in F1 either, so there's no chance of them invading their own territory.

The biggest risk is that Audi would never get close to the front of the grid. Mercedes needed four years to get to where they are now, while Honda are proving how difficult it is to start from scratch, with their engine reducing McLaren to struggling backmarkers this season.

And failure to compete would only be compounded by Mercedes outperforming them in every corner of the globe. With Germany's big brand locked in eternal road-car warfare, being humiliated by Mercedes in F1 would doubtless be labelled a ‘concern' by Audi's PR team.

But as Ferrari and Mercedes pitch themselves as the leading developers of new-age, thermally efficient engines, it might just be worth a gamble. And with the vast expertise and resources of VW behind them, Audi has more chance than most of immediate Grand Prix success.

If they make a go of F1, it may well be a case of vorsprung durch technik.