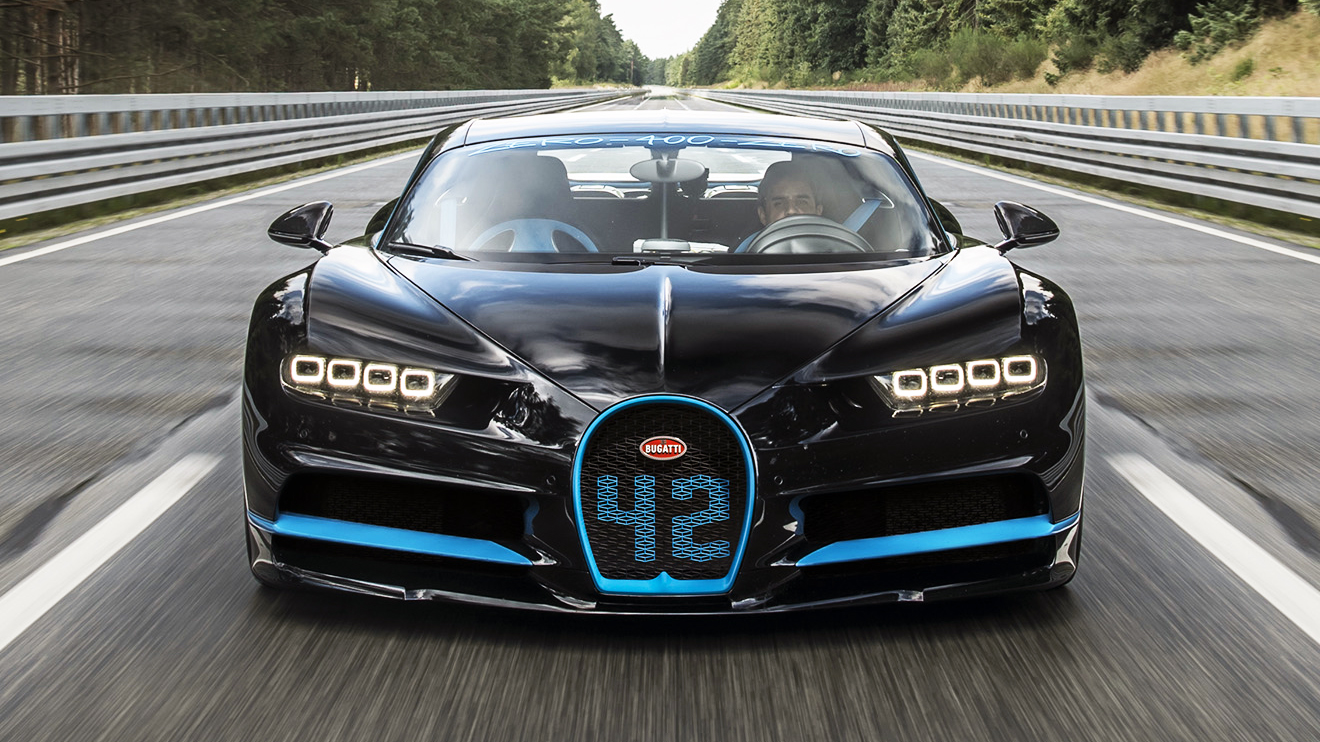 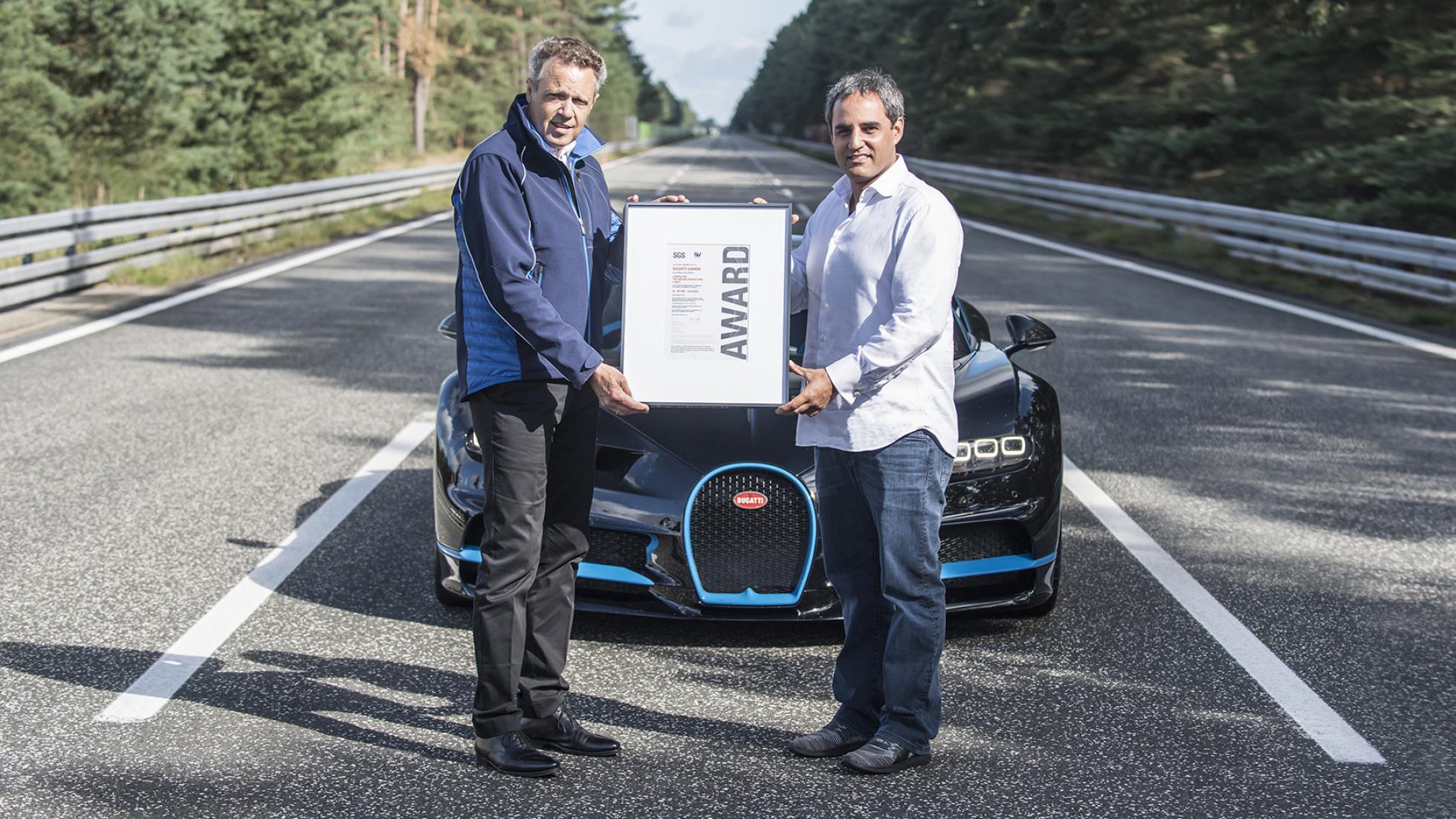 At this year's Frankfurt Motor Show, Bugatti decided to demonstrate just how capable its new Chiron is... with a 0-249mph-0 run. The time? A scant 42 seconds, which becomes a new world record. You can watch the video above. TopGear.com caught up with the man behind the attempt: ex-Formula One driver and two-time Indy 500 winner Juan Pablo Montoya.

How did this new relationship come about?

Mr Dürheimer called Roger [Penske] and Roger sent me a text saying there’s something cool that I think you should do, and I thought OK. He said he was going to send me an e-mail, didn’t tell me anything. So I read the e-mail in my motorhome at the racetrack and went across to where his office is and said, can I do this? He said yeah, sure.

Had you driven the car before?

No. Before we did any runs I went to see the car and learn about it. I went to Mulsanne to see the factory, you know the whole VIP treatment. I drove it for the first time, and everytime I gave it the gas, it gave me the giggles. It’s insane, it’s so crazy how fast it is.

How quick is it compared to race cars you driven before?

What sort of forces were you experiencing during the record run?

We did the 0-400kmh-0 run 17 times and the fastest run was the second one when I was just getting used to it. The conditions were right for that one because it was warmer. In cold conditions you get to 300kmh much quicker because the air is dense and you make more power, but then from 300kmh to 400kmh you have more drag.

You get to 300kmh in 13 seconds, so it’s what happens above that that matters, and that’s when the warm conditions are better. The way it gets to 400kmh really is incredible. At one point they told me to go and burn some fuel to get the weight down, so I said OK, turned around and hit 420kmh for fun, it doesn’t take much to get there, honestly. The fastest I’ve ever been in a race car is 407kmh in an Indy Car back in the day, so that was a new all-time speed record for me. How many people go above 400kmh? Ask Lewis Hamilton, it’s probably like 370kmh.

Don’t take this the wrong way, but could I do the same time as you?

Yes, probably. The biggest thing would be the reaction from wide open to brakes. They didn’t want me left foot braking while I was still on the gas. Honestly when you get on the brakes it’s so stable, you’re on the ABS. We used road tyres, the car we did it in is the exact same car customers buy...

Did you have perfect conditions?

No, not really. Our fastest run we actually went up to 402kmh or 403kmh, we went over it. After that we had a light when we hit 400 so I could be more precise, so if everything was ideal it would probably be over a second quicker. I also think if we used tyre speed monitors instead of GPS then it would be even quicker because you’d stop and the clock would still run a tiny bit – the GPS couldn’t keep up.

How fast do you think the Chiron has the potential to go?

I don’t know, I don’t want to answer that. Ask him [points to Bugatti CEO Wolfgang Dürheimer]. When you go into the high-speed mode and go 400kmh it’s really stable, above that it’s very stable but you notice the wind, you need to take care.

Let’s put it this way, the Veyron had to come off the banking at around 200kmh, and then needed the whole 8km straight to get to 431kmh, or a little bit less to leave space for braking. In the Chiron I came off the banking at 200kmh and a little past a third of the way down I was at 420kmh already.

Did it feel dangerous at any point?

No! They had this amazing Bugatti race suit made for me with boots and gloves and everything and I did some trial runs and came back and said, why do we actually need one? I didn’t wear a helmet either, I brought one, but honestly I didn’t need it. It doesn’t look right if I’m doing something a customer can do [where applicable], and I’m wearing a helmet and a harness.

Could they make a race car out of the Chiron?

I don’t think it’s in Bugatti’s plans, but if you put that on the current F1 grid in the run down to the first corner it wouldn’t be far off… it’s true.

So will this be a long association between you and Bugatti?

I hope so! I hope Bugatti will invite me to their world record run with the Chiron in 2018. At any rate, I’m saving the date in my calendar.