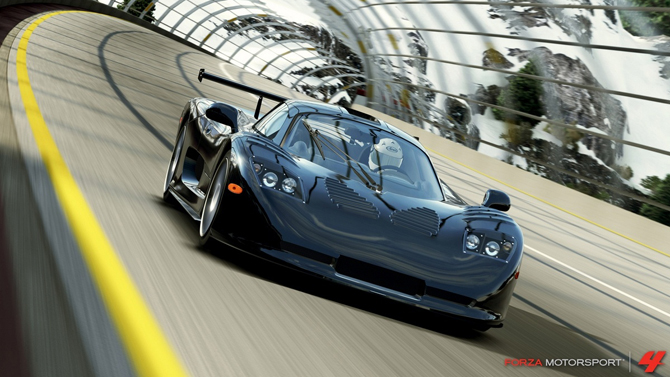 This is an auspicious week for the gaming community: over the coming days the entire lot have decamped to LA, blinking in the unfamiliar sunlight, where the annual E3 showcase announces the year ahead in console releases.

And we can confirm two pieces of news from the show pertinent to all Top Gear fans.

First is that Forza Motorsport 4 will include a perfectly-realised version of our Top Gear track on the Xbox 360 for the first time. And that's definitely the UK track in Dunsfold with the plane and the studio and the shambolic production office full of crisps and everything, to quash some of the internet rumours currently flying.

Second is the announcement of the new "Autovista" mode. You'll be able to explore cars rendered in over one million polygons in a full 360 degrees "showroom environment". If you've got Kinect, you'll be able to crouch down, open the doors, check out the engine and walk around the car (although it will still work with a controller). And all to the dulcet tones of our very own Jeremy, who'll deliver his own opinionated take on a selection of the models as you fiddle.

That's not the only Forza news from E3 - they've also confirmed the use of Kinect for head-tracking: as you're racing you'll be able to look to either side of you to look into corners and kiss the right spots. There'll be 16 player multiplayer, cars from over 80 manufacturers, and, as we have already reported, the ability to carry over all your details from your current Forza 3 profile to reward your hours of slog over the past year or two.

The gameplay trailer below gives some indication of just pretty it's looking so far (and if you're quick with the pause button, there's also a fleeting glimpse of our track):

E3 is going on all this week, so we'll update this story as any more TopGeary news comes in... In the meantime, here's some hi-res snaps of Forza 4 to mull over.

The game's released in the US on October 11, October 14 in Europe, Middle and Africa and October 20 in the rest of the world.

And now that both will feature the Top Gear track, we'll welcome you to debate the relative merits of the Gran Turismo and Forza games below. Based on past experience, we know you're going to do it anyway...

UPDATE: The website gamestrailers.com has some footage of (a rather twitchily-driven) Kia C'eed doing a lap of the track, while we've also uploaded some more pics of some exotic machinery draped over Dunsfold right here.