It's the 577bhp, mad as a badger Mercedes AMG GT R 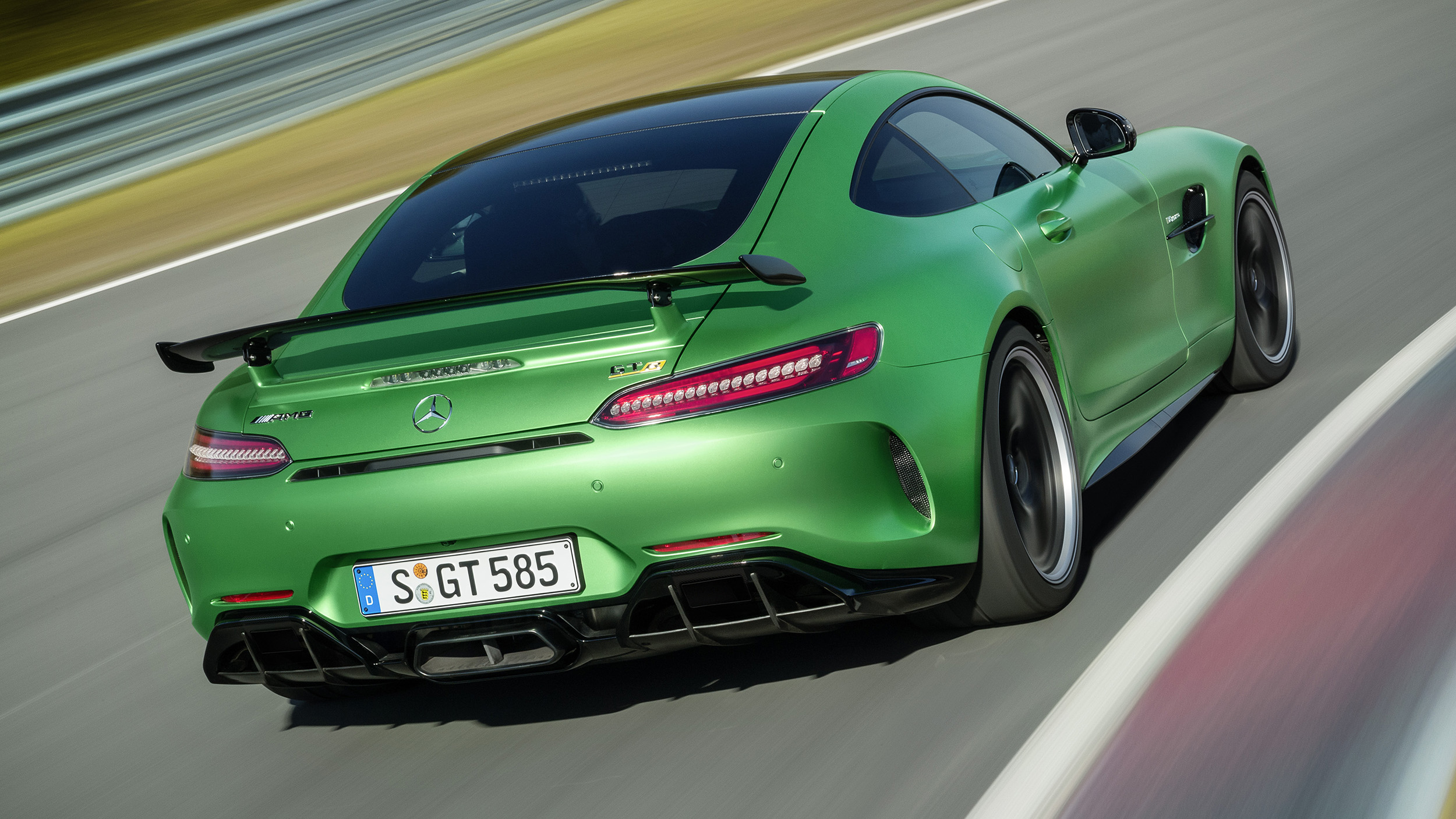 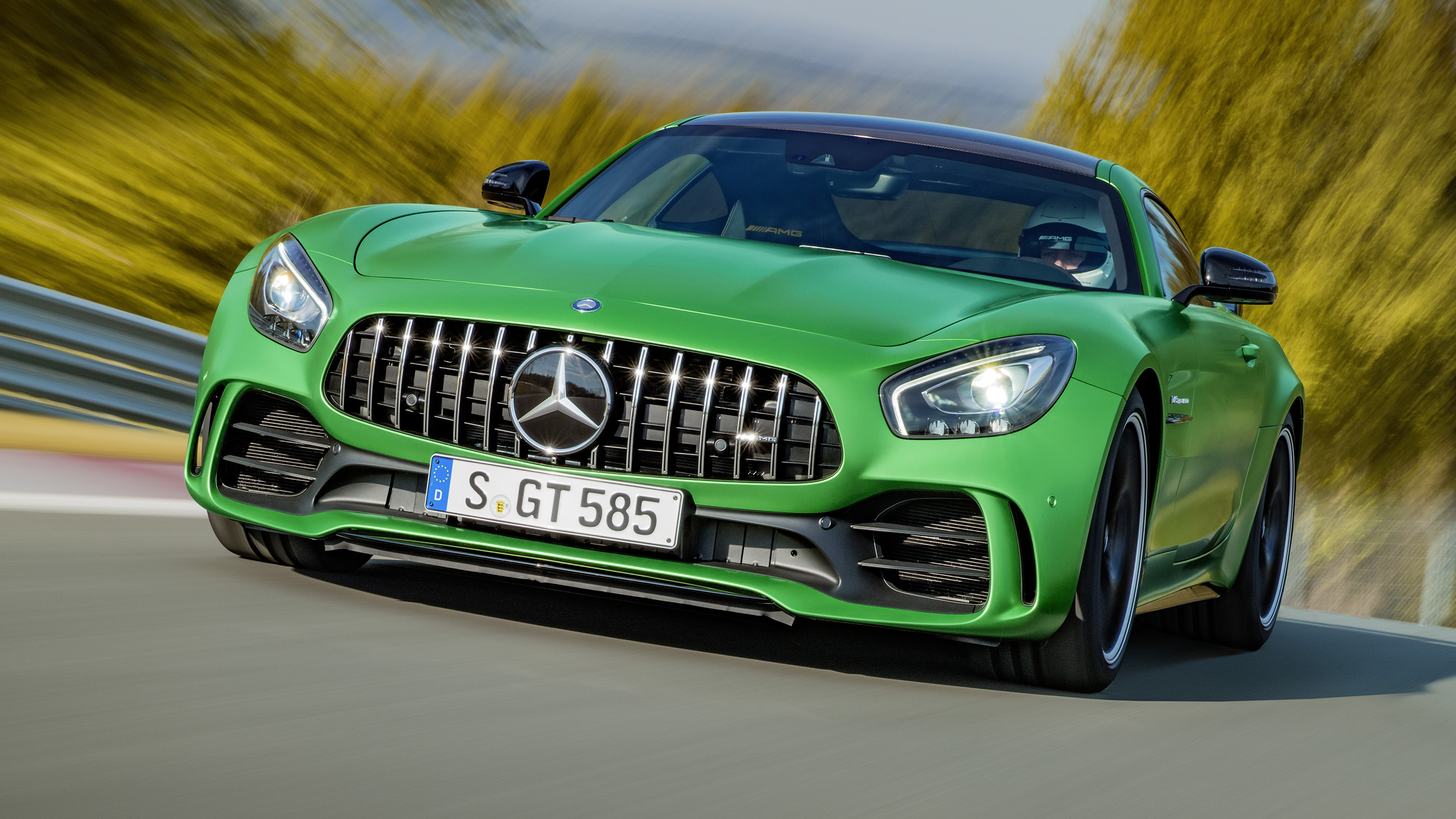 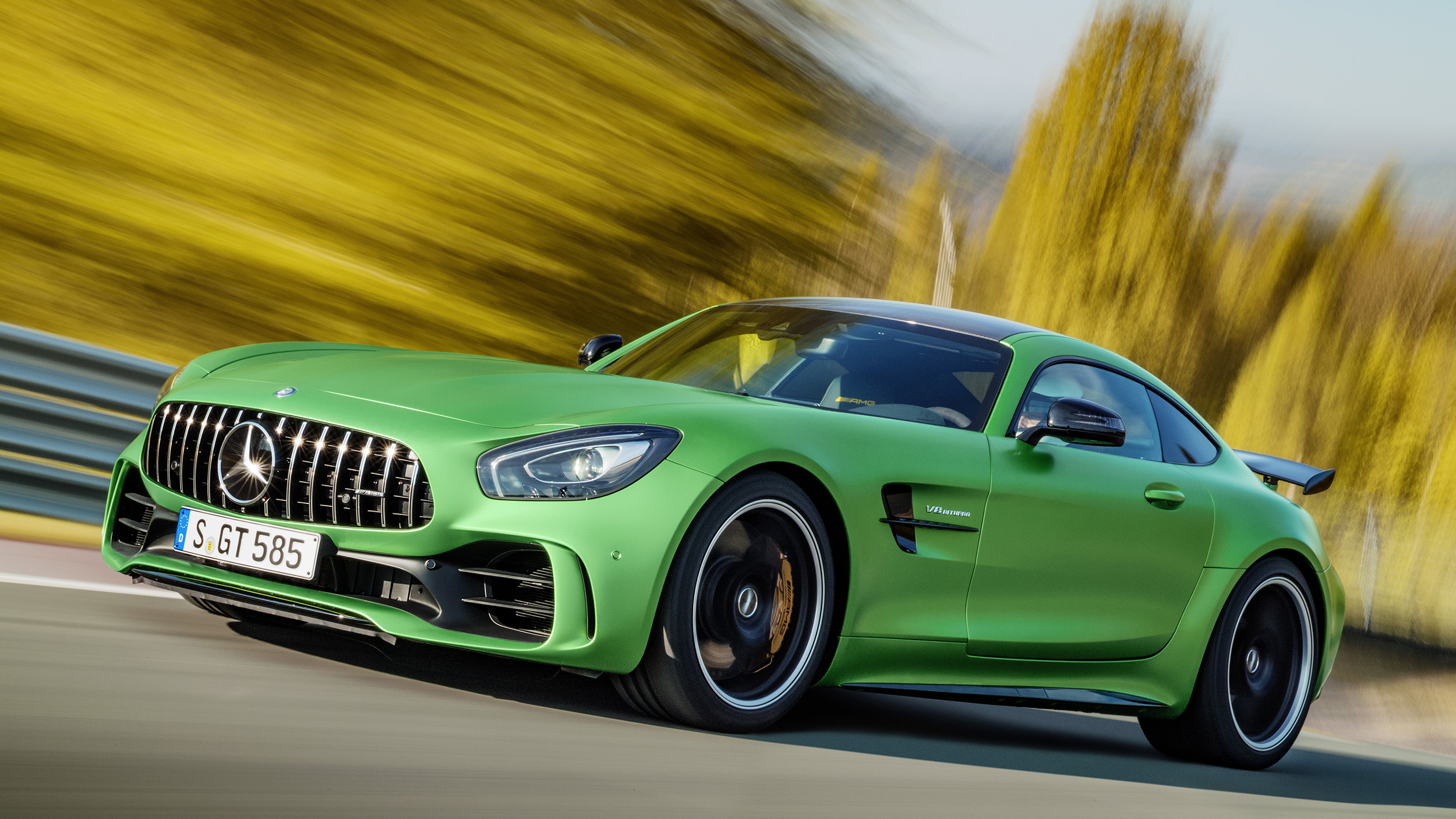 Boys and girls, welcome to the meanest, greenest AMG. It is the new Mercedes-AMG GT R, the hardest cored, most track-focused version of the GT sports car yet.

Its tech specs are detailed but exciting, so bear with us as we take you on a whistle-stop tour of perhaps the most laser-guided attack on the Porsche 911 GT3 RS yet.

As an AMG, the only place to start is under the engine bay. Specifically, behind the front axle, where a modified version of the AMG GT’s ‘hot inside V’ 4-litre twin-turbo V8 sits. With sharper-reacting turbos and a new exhaust system, it produces 577bhp and 516lb ft, increases of 74bhp and 37lb ft over the next most potent AMG GT, the GT S.

The GT R is lighter than the S, too – an impressive boast we’ll get to later – its 1,630kg combining with the boisterous power output to yield a 3.6sec 0-62mph time and 198mph top speed. That means a 0.2sec cut and 5mph rise over that GT S. Those figures put it on par with the (notably more powerful) SLS AMG Black Series, perhaps its spiritual ancestor.

But numbers don’t tell half of the GT R’s story. What will matter to those taking it on track is the pedigree of its chassis componentry. “It combines the driving dynamics of our AMG GT3 racing car with the everyday practicality of the AMG GT”,” promises AMG chief Tobias Moers. And there’s certainly a lot of motorsport kudos to the bits his team have fitted to the GT R.

Broader track widths and cup tyres are a given. The lightweight, forged aluminium suspension is manually adjustable if you’re handy with the spanners, and has electronic, adaptive damping control if you’re not.

There’s an electronic differential operating on the rear axle to help control all those rampant horses. The stability control has three settings (including OFF, if you’re brave/talented/loopy) while the traction control has nine levels of intervention, adjusted via a racing car-like knob in the middle of the dashboard.

If you’re a fan of ALL OF THE TRACTION, though, then you’ll be happy to learn about the GT R’s four-wheel steering system. It operates by wire, rather than mechanically, and it can turn the rear wheels by as much as 1.5 degrees.

Just like the 911 GT3 (and other Porsches since), it’s a system that aids agility at low speed (well, below 62mph) by turning the rear wheels in the opposite direction to the fronts, and stability at higher speeds, the rears pointing in the same direction as the fronts. The system in the Ferrari F12 tdf only uses the latter approach.

You’ll have noticed the bodykit. AMG promises us that form always follows function, and everything from the wide, air-gulping mouth to the manually adjustable rear wing all aid air flow through the car. Don’t half make it look mean too, mind.

There are active flaps behind the front fascia and underneath the car, developed on a computer simulation before entering a wind tunnel, and finally being honed on the Nürburgring. It is that track which the car’s ‘AMG green hell magno’ matt paint pays homage to. 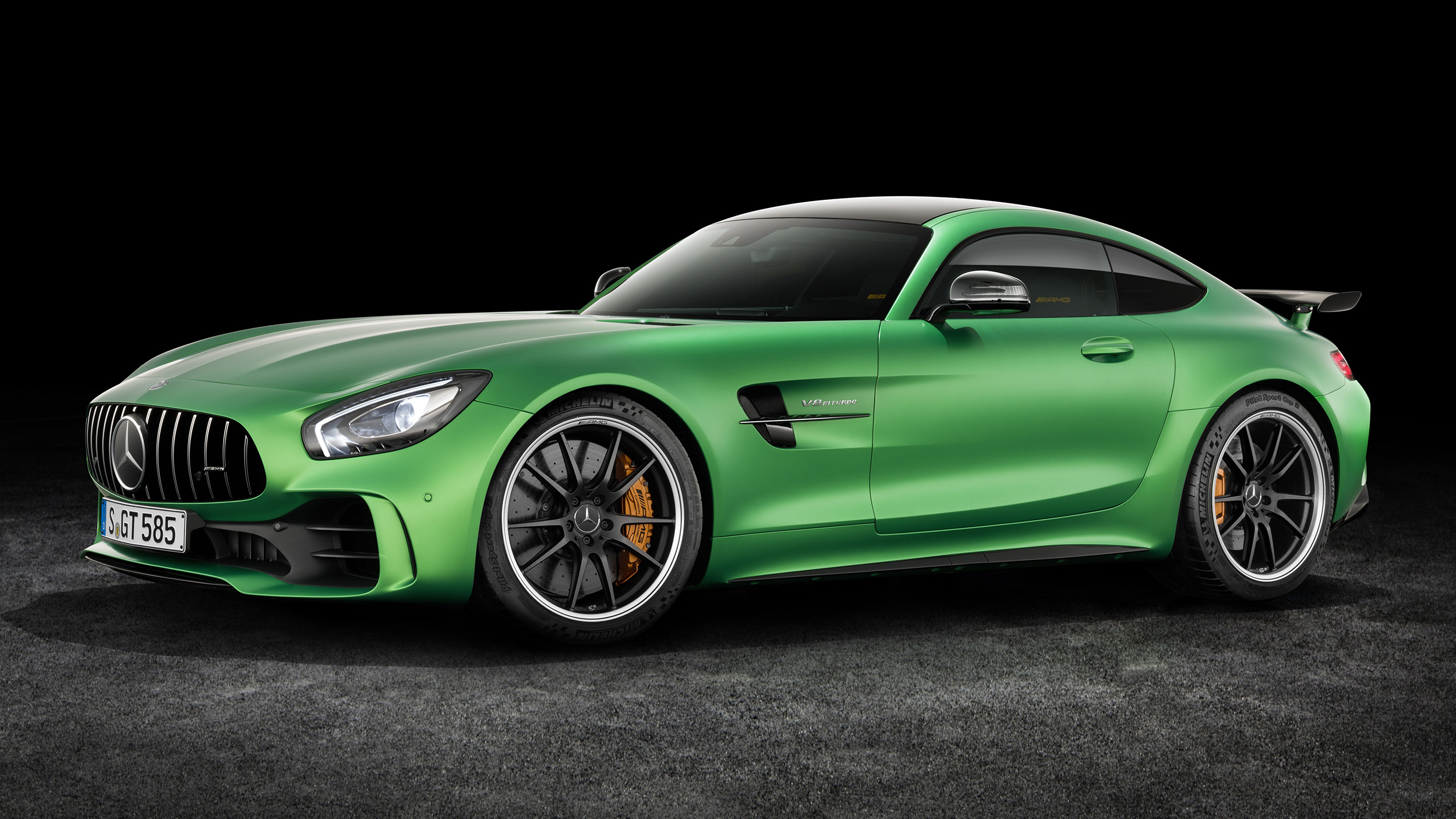 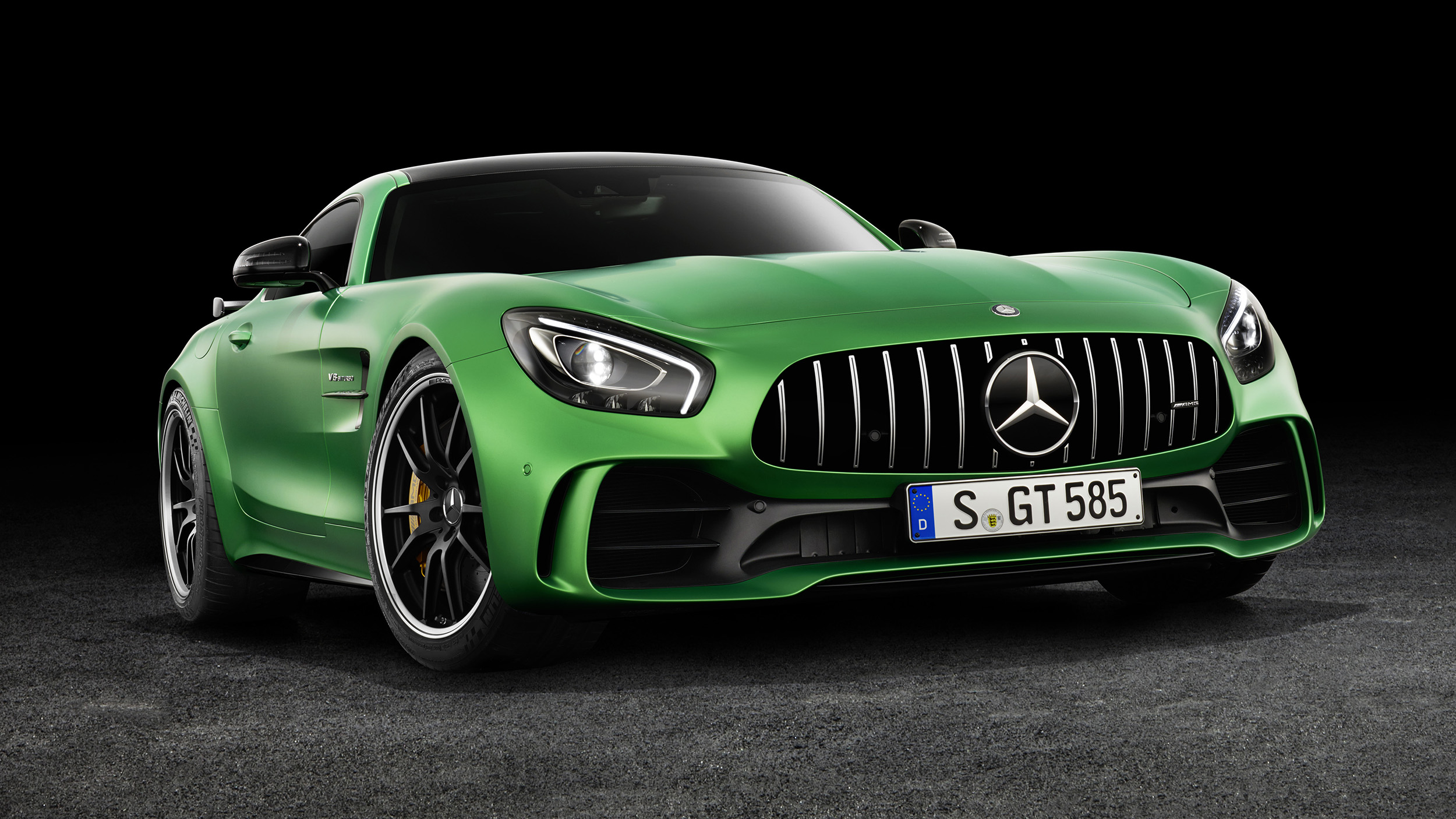 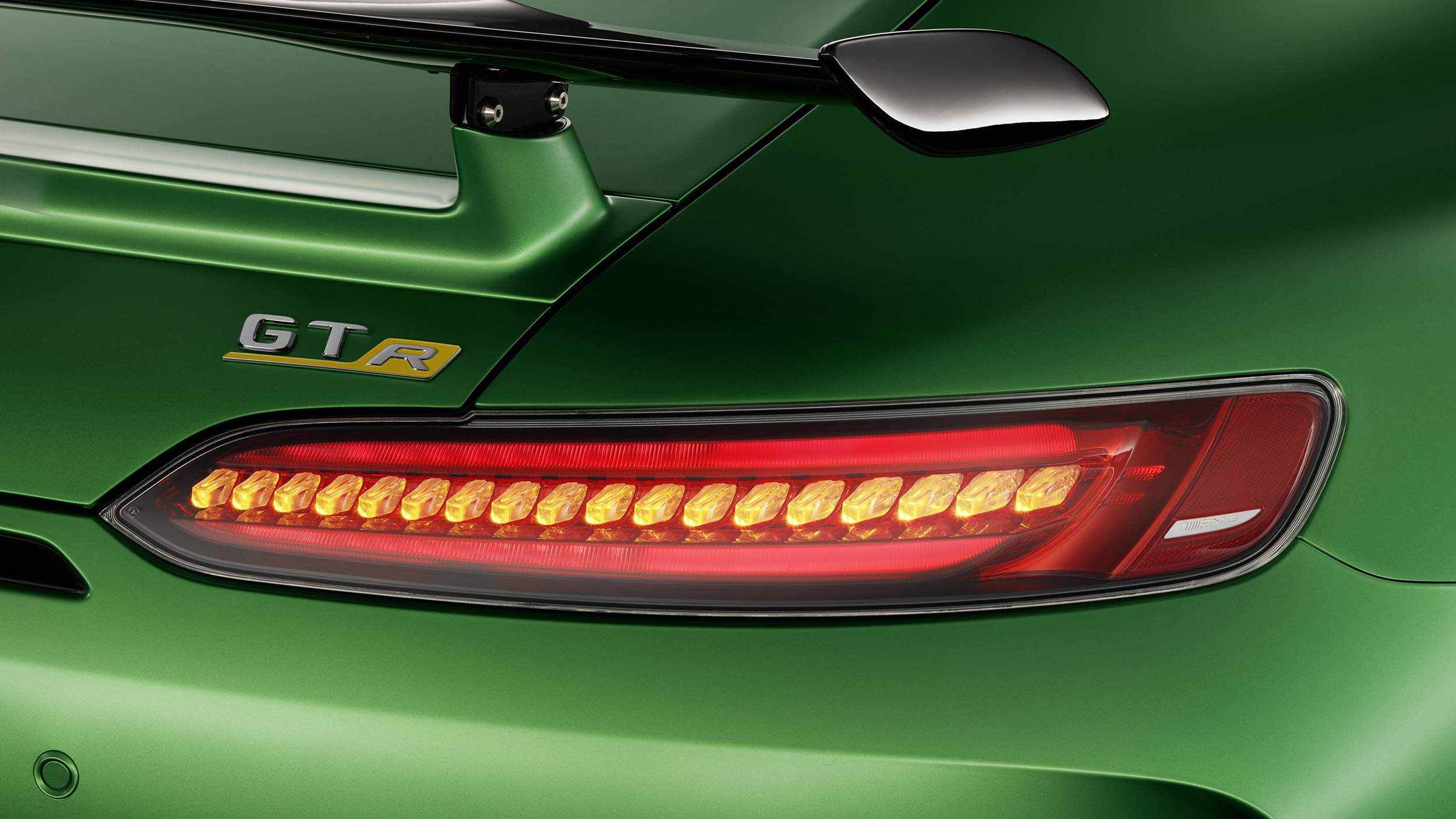 Much of the car’s development has taken place there, though its various switchable modes – and the angles you can apply to that spoiler – ensure it should feel at home at circuits of all seniority levels. Quite how natural a 1.6-tonne car can be on circuit is an argument for when we drive it; you need your pulse testing if you don’t want to take this to your local track evening.

It should be able to pass the noise limits, too, thanks to the active flaps of its new titanium exhaust system. They are described as ‘infinitely adjustable’, but in their more open states, AMG promises us an ‘emotive sound composition’. We believe that is marketing speak for LOUD. We’d expect nothing less from a monster AMG.

That exhaust system is also six kilos lighter than the AMG GT S’s, and as well as a central tailpipe (which is easy to see), it has two, more subtle tailpipes tucked away either side in the rear diffuser. Nerd fact: their tips are carbonfibre to protect the diffuser from their high operating temperatures.

And while we’re staying nerdy, much work has been done to counter the addition of four-wheel steer and abundant aero addenda, to keep the GT R lighter than its GT S relation. Stuff like a ‘carbonfibre tunnel cross’, a structure tucked under the exhaust system to keep the car stiff (it increases rigidity by 7.5 per cent alone) without adding excess grams. You will also see the standard-fit carbon roof.

One final nugget, and we've saved it for the brakes. In a car this stocky and powerful, you will want some. As standard you get a composite set up with 390mm discs at the front, 360mm rear. Tick a (probably pricey) option box and you’ll get a stronger ceramic setup with 402mm front discs. Should be big enough…

The Mercedes-AMG GT R makes its public debut at this weekend’s Goodwood Festival of Speed. Sales begin in November, with the car launching in March 2017. Expect a firmer idea of pricing then, but a comfortable premium over the £110,000 AMG GT S is assured. It’ll be buying an awful lot of clever stuff, though…