We rode shotgun in the new 345bhp Ford Focus RS. Yes, it drifts 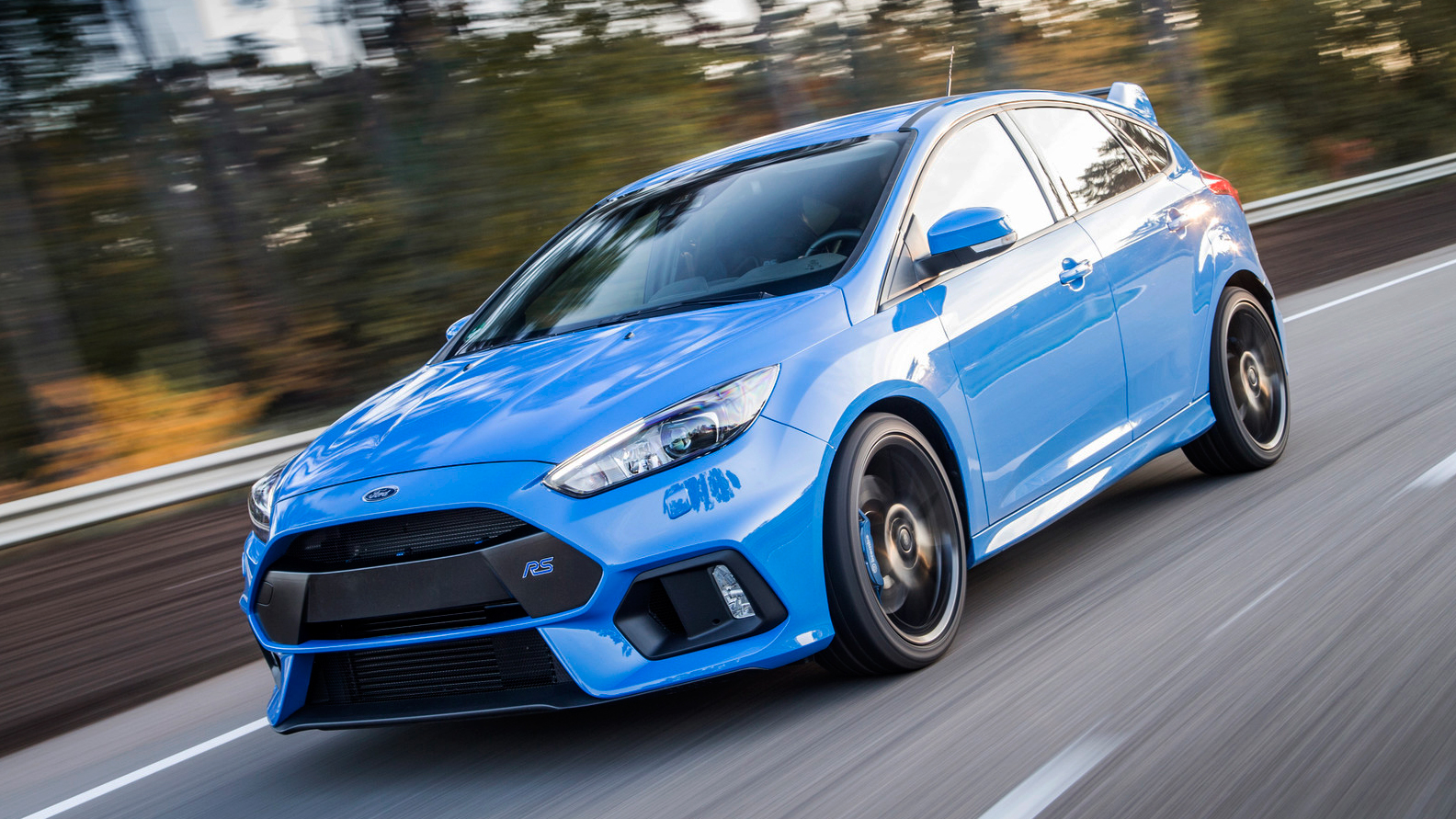 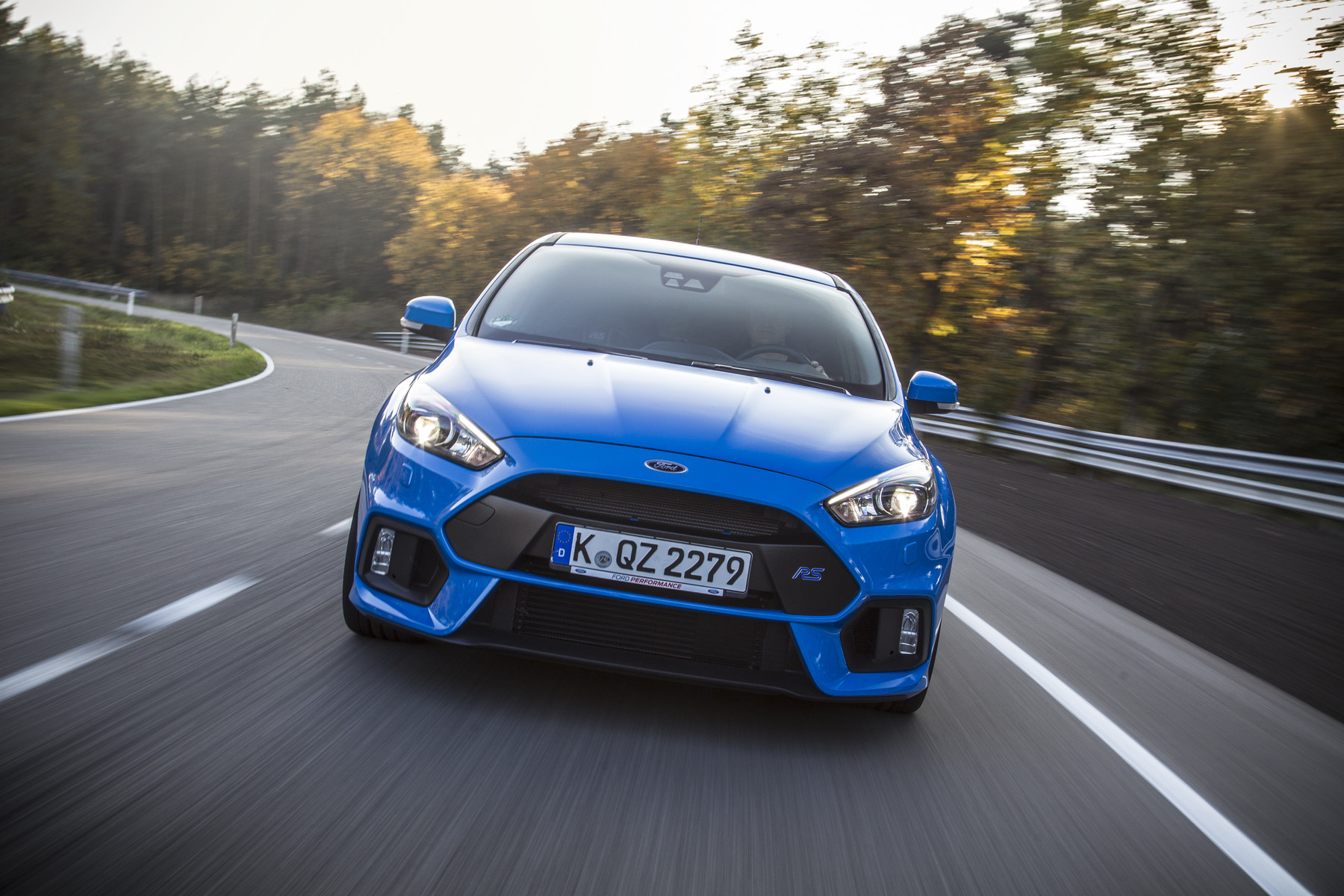 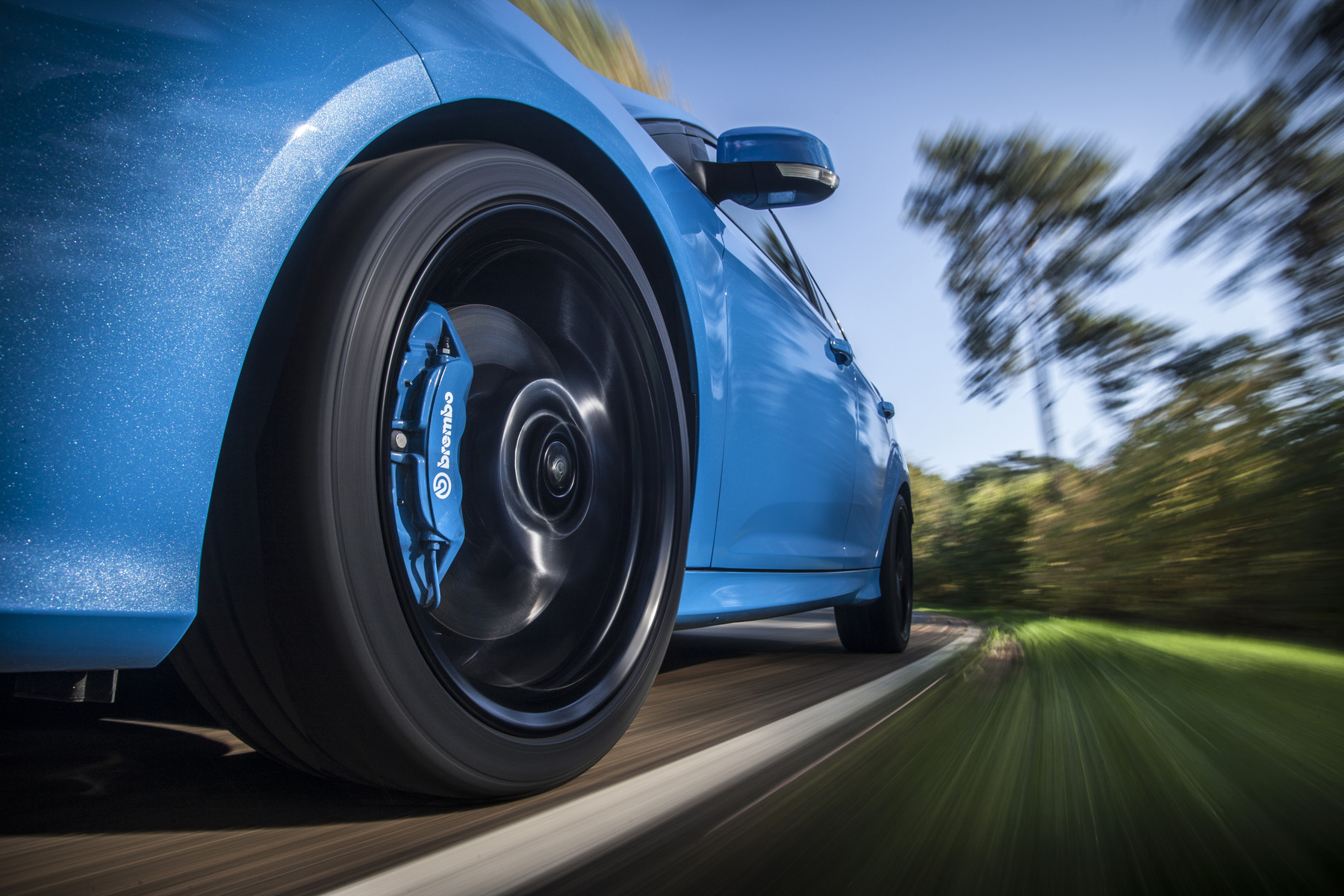 So how does the new Ford Focus RS drive, then?

We can’t tell you that yet. Not until January, when we officially get behind the wheel of Ford’s 345bhp, 4WD super-hatch. What we can tell you right now is how it feels from the passenger seat.

Does it feel drifty?

Sshh. There are many important technical things to discuss before we get to the RS’s much publicised ‘Drift mode’.

No there aren’t. Does it drift?

Oh goodness yes. The footage you’ve seen of Ken Block hooning sideways do not exaggerate the RS’s drifting capabilities. Engage the correct driving mode, and this thing will do donuts, slides, skids and any other form of rear-biased silliness you fancy, all at the drop of a particularly droppable hat.

Stick the RS into Drift mode – the most liberal of the RS’s four set-ups – then stuff the throttle with plenty of steering lock applied, and the Focus effectively becomes all but rear-drive, shoving its power to the back axle to enable drifts of every radius.

This isn’t some give-you-a-second-or-two-of-slip-before-shutting-it-down system. Oh no. It’ll stay sideways until you run out of talent, tarmac or tyre tread.

On road, such a trick should be mildly diverting. On a track, it’s genius. On ice, I suspect the Focus RS might be even more fun than a Lambo Huracan. 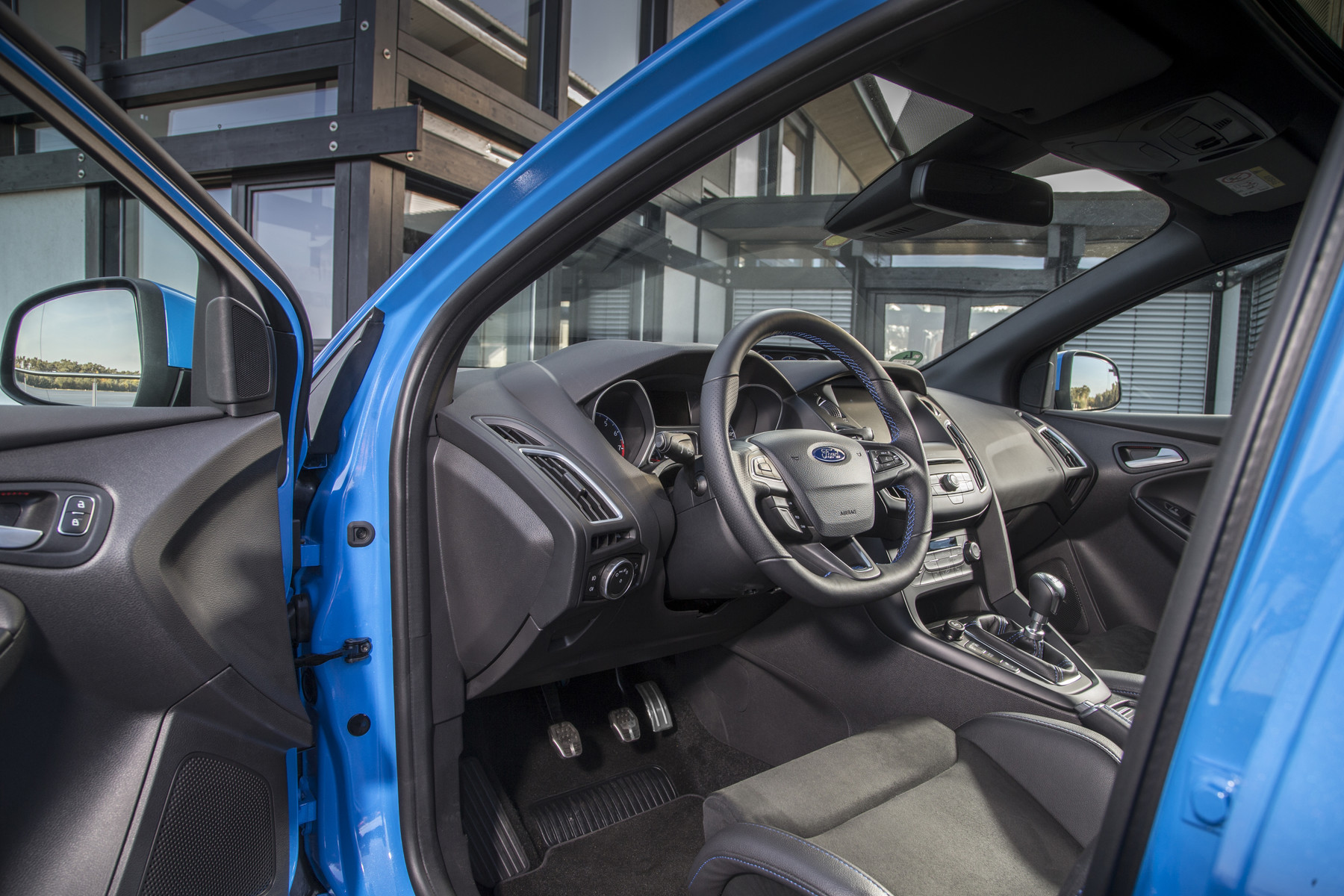 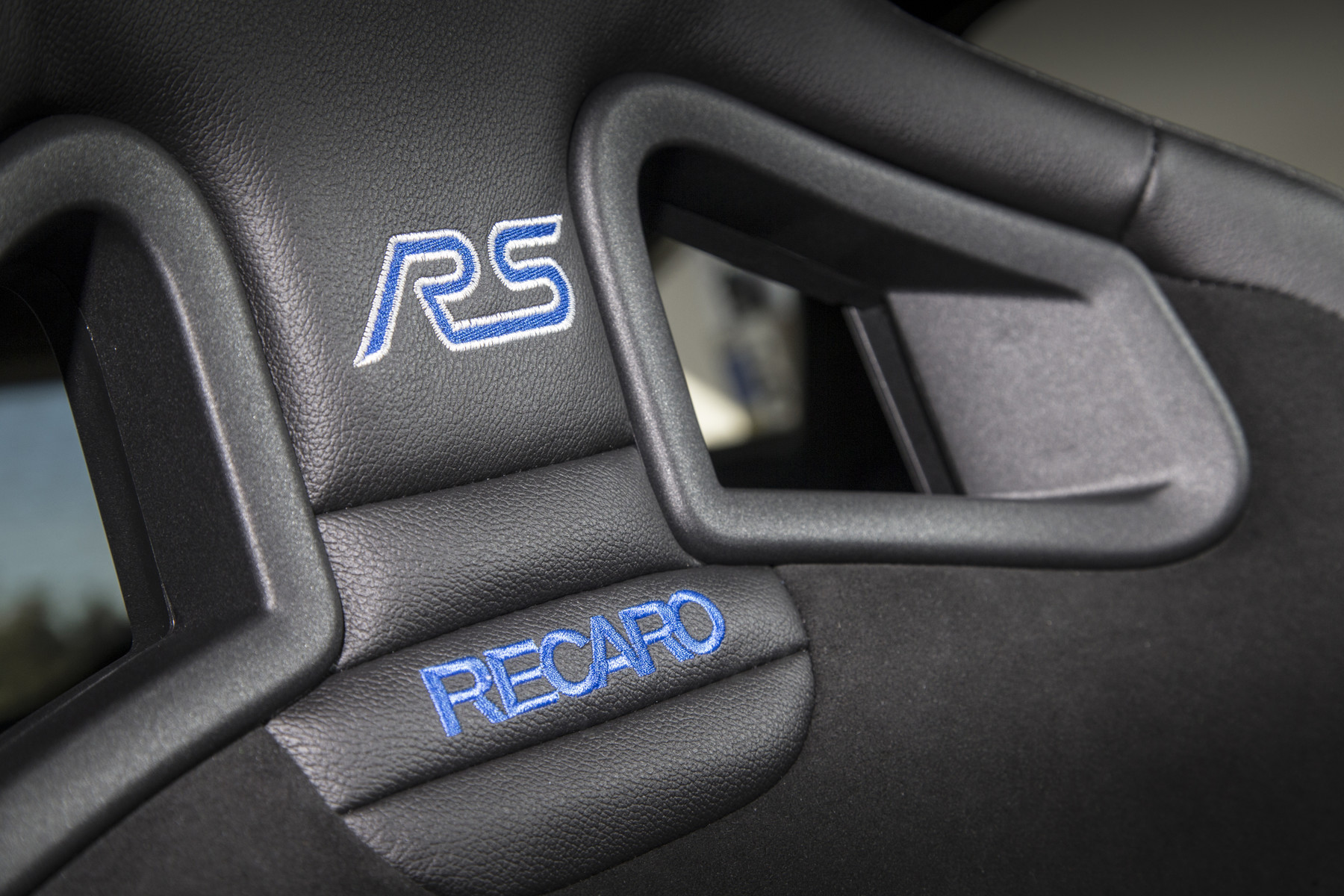 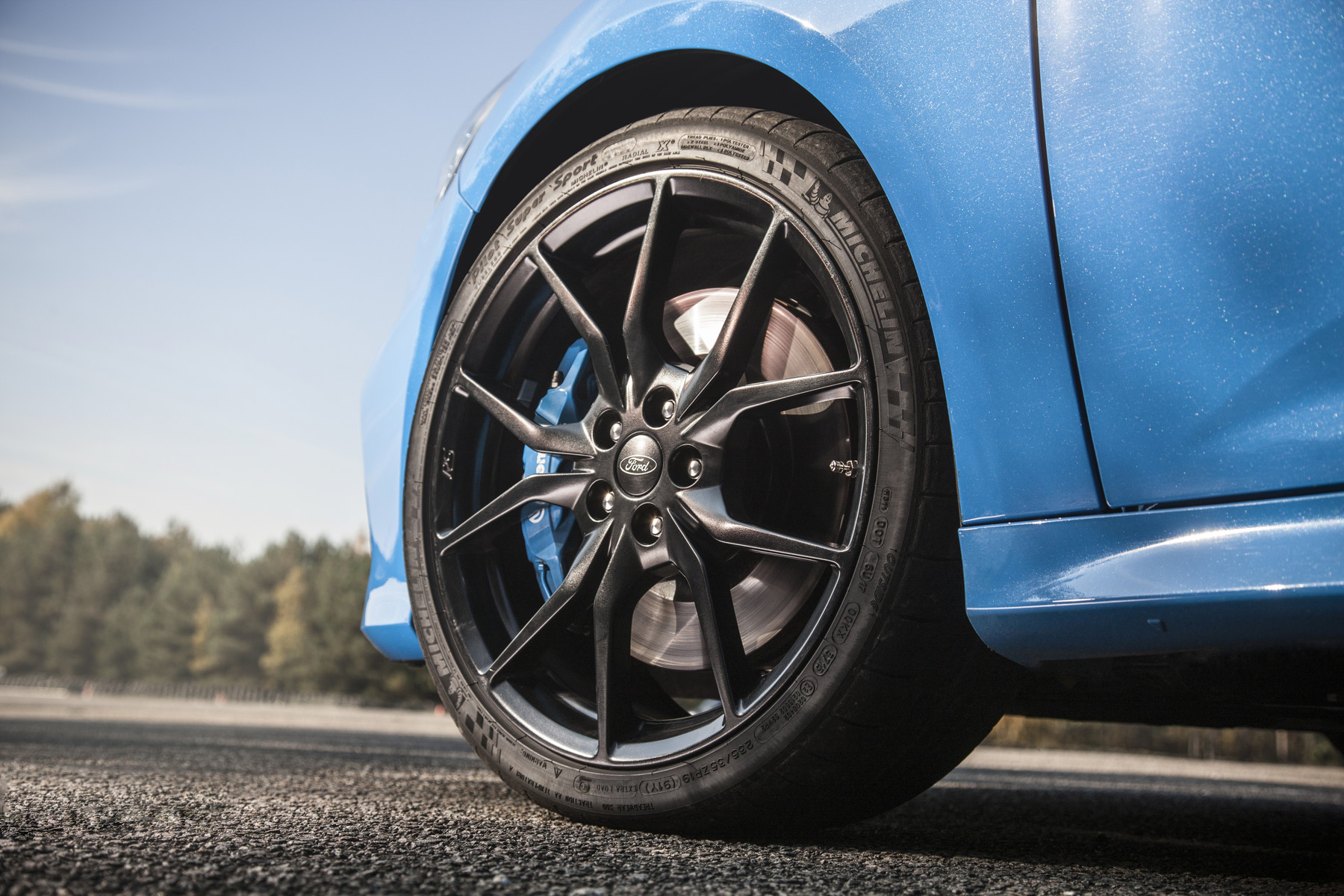 So it’ll let you get out of shape more than, say, an Audi RS3?

Ford wants to make clear that the RS’s 4WD set-up shares no DNA with the Haldex-based systems employed by most of its four-wheel drive hot hatch rivals.

On the RS’s back axle lurks a unique clutch pack – the ‘rear drive unit’ or RDU, as Ford calls it – that can apportion 100 per cent of available torque to whichever side can best use it, giving the Focus a far more aggressive rear bias than any other 4WD hot hatch out there today.

“Haldex-type systems have their limits,” says Tyrone Johnson, Vehicle Engineering Manager for the Focus RS. “They didn’t provide any answers for us. They’re really quite boring.”

The RDU is made by GKN, and loosely based on an application found on the Range Rover Evoque. “We used some Land Rover components to start, but we broke them,” admits Johnson. “So we built our own…”

The RS’s set-up, then, is very much unique. While developing up the Focus, the engineering team’s mantras were ‘high-speed corner exit” and “no more understeer”. Feels like they’ve nailed both.

Anything else you could ascertain from the passenger seat?

That the Focus RS is hellish quick. Engage launch control, and it’ll do 0-60mph in 4.4 seconds, an impressive time considering it employs a six-speed manual box rather than a double-clutch transmission: Ford engineers reckon it’d go three-tenths quicker with a DCT (and haven’t ruled out the possibility of fitting one in future). We’ll take the slower official time for the engagement of a manual.

Point is, the Focus RS feels even quicker in-gear than that 0-60 time suggests, with a thuggish slug of torque – officially a maximum of 325lb ft, but actually as much as 347lb ft available for up to 18 seconds of overboost – around 3000rpm. Throttle pinned, it maybe feels a fraction less tear-yer-face-off rapid than the RS3 or Merc A45 AMG, but the mid-range punch should make it a proper overtaking weapon.

In normal driving, the RS pushes around 70 per cent of its torque to the rear, making it feel far less nose-led than front-biased 4WD hot hatch such as the Audi RS3.

In Sport mode, there’s masses of grip, with just a hint of oversteer if you really boot in on corner exit – and that’s on the standard Michelin Pilot Super Sport tyres. Sport Cup 2s will be available as option. These should offer fearsome grip… in the dry at least.

The RS uses electronically assisted, but non-variable steering, with 2.5 turns lock-to-lock. Tough to tell from the passenger seat, but the nose felt mighty pointy. 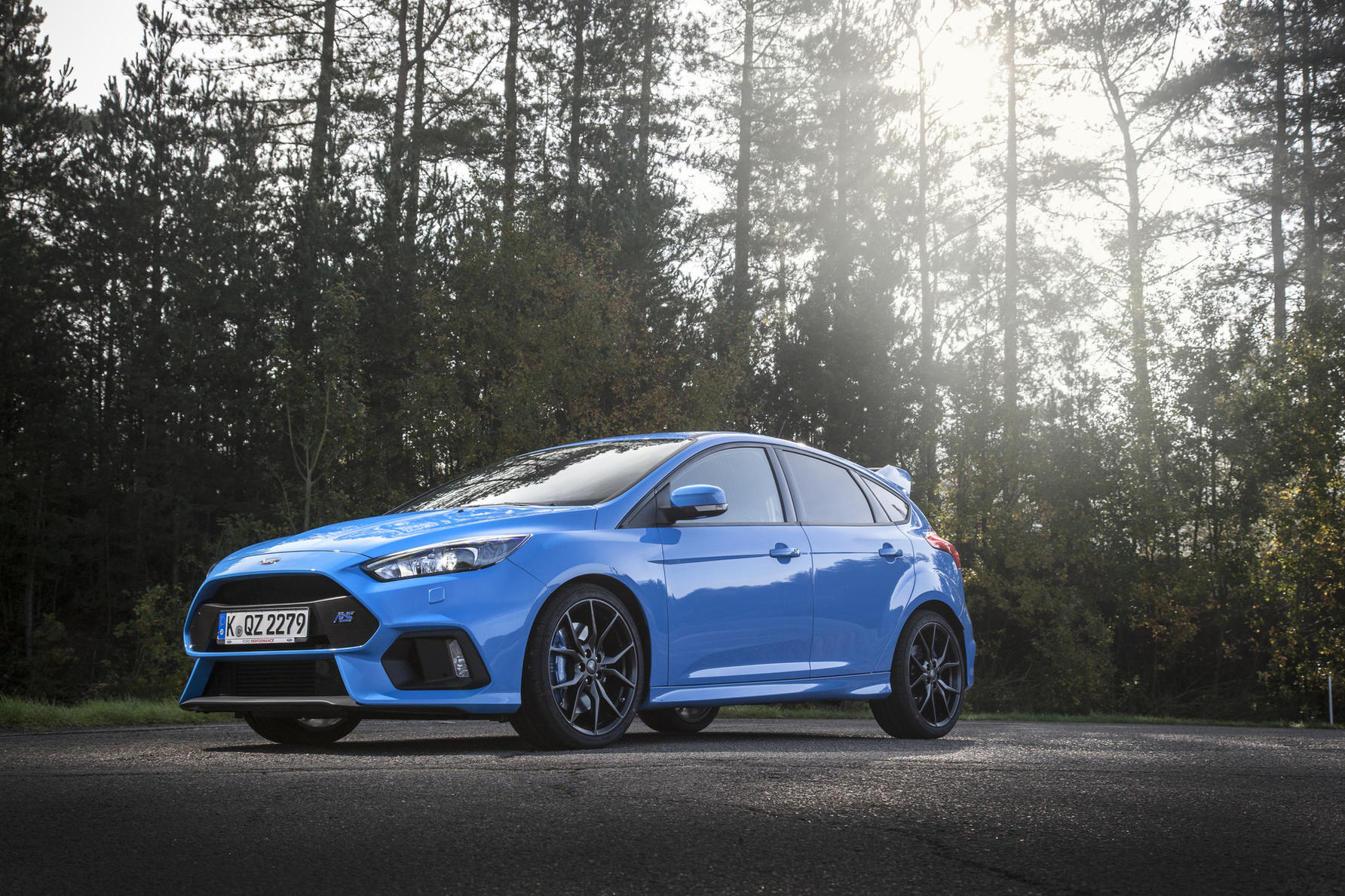 Fruity. In all but Normal mode, the Focus will squeeze a couple of drops of fuel into the exhaust system on the overrun, giving a heady array of pops and bangs guaranteed to make you unpopular with your more conservative neighbours.

Beyond that, there’s not quite the unmistakeable soundtrack of the old five-cylinder Focus RS, but the new car makes a heady, boomy rumble that stops just the right side of caricature.

Does it use a Mustang engine?

Yes, the Focus’s 2.3-litre four-cylinder turbo shares its basic architecture with the unit producing 306bhp in the base Mustang, but the hardware has been greatly overhauled.

There’s a new Cosworth-made alloy cylinder head and high tensile cast iron liners, along with a new compressor housing and a turbine wheel. Ford’s engineers admit it was a challenge to hit the power and torque figures, but the RS’s engine certainly doesn’t feel laggy or overstretched, just muscular and amenable.

Tough to tell from the passenger seat, but the RS seemed to rev freely enough, if without the massless alacrity of, say, the old naturally aspirated Civic Type R. Such is the new turbo era.

How does it stop?

No pricey carbon ceramic brakes here, but the RS stops sturdily. It wears the biggest brakes of any Ford RS car yet: 350mm discs at the front, cooled by ducts either side of the main grille. Ford reckons they’re sturdy enough to survive half an hour of hard track use without significant fade: we spotted no reduction in stopping power during our circuit-only passenger ride.

And how does it ride?

The Focus is the first RS car to get adaptive dampers, with just two settings – Normal and Sport – rather than the plethora of options offered by many German rivals. There’s a significant, noticeable difference between the two: Ford says the RS’s ‘Normal’ setting offers a ride roughly on par with the current Focus ST, while ‘Sport’ is some 40 per cent stiffer.

From the passenger seat, Normal felt spot-on for road use, while you wouldn’t want to venture near Sport unless you’ve got a very smooth section of track ahead of you.

Sensibly, no matter what mode you’ve set for throttle, ESP and the rest, you can still override the damper settings from a switch on a steering-column stalk. Which means you can opt for max-attack everything on the drivetrain/steering/ESP front, but retain the softest damper mode: good news on British roads.

Sounds like you found out quite a lot from the passenger seat?

Enough to get mighty, mighty excited about the Focus RS, especially considering its absurdly reasonable price tag. This could be the first 4WD hot hatch in a long time – arguably ever – to feel more rear-drive than front-drive, to trade understeer for oversteer.

Looks good, sounds good, gets very sideways: what’s not to get excited about? Colour us impatient, Ford…