TG speaks to Ken Block on his latest video, and what the future holds... 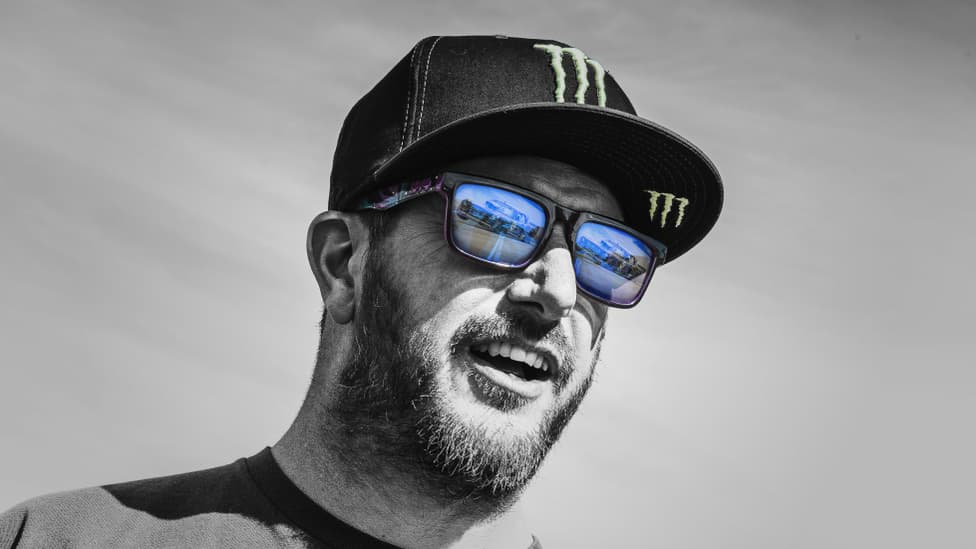 Nine Gymkhana videos, a mountain of rubber laid to waste, hours of Internet-friendly oversteer and a smile: Ken Block has gone from being whispered in petrolhead circles to a fully-fledged master of sideways. From powersliding his way around an airfield to taking Matt LeBlanc on a hot ride of London.

Today, TopGear.com brings you an exclusive look at the latest salvo in his ongoing War On Tyres: ‘Terrakhana’. It’s a spin-off from his regular Gymkhana series, and if you haven’t watched it, then click these fine, upstanding blue words.

Before you dive into that, we caught up with the big man to discuss the video, his penchant for danger and the future…

TG: Ken, can you explain to us what on earth Terrakhana actually is?

TG: Is Terrakhana a result of Gymkhana being hugely successful, and the need to branch off?

KB: Well, I get to take these race cars out of race situations and have fun with them. I grew up skateboarding and snowboarding, riding dirt bikes… most of the time I was doing this I wasn’t competing, but it’s the opposite with race cars.

These videos let me go out and have fun with rally type cars, and I’m not so concerned with trying to win a race. For me, it’s just about getting to go out and play with these amazing toys.

TG: Fair point. How long did it take to film Terrakhana?

KB: The shoot took two days. It’s down in a part of the Southern Utah desert, sectioned off by the government to be a recreational area where you can drive dirt bikes, quads, ATVs… There’s a lot of beautiful desert in Southern Utah, loads of national parks. This particular area called Swing Arm City was made specifically for people to go down and enjoy off-road vehicles.

TG: Was it straightforward, or were there any hairy moments?

KB: Most of the shoot was fairly straightforward. I was driving my Fiesta rally car, so it’s familiar terrain of finding jumps, climbing up turns, various big rocks and lots of obstacles. There’s one hill that we call ‘knife edge’ that, if I were to go off the back side, it would be a 100ft drop to my death. It was fun to do it in a rally-style way – you don’t normally see a car up there.

TG: Sounds… scary. Does it ever frighten you?

KB: Every once in a while! It’s all about understanding risk. Unfortunately for us nowadays, with the Internet, if something doesn’t look death-defying it doesn’t get much attention! I put myself in a couple of situations that were potentially pretty dangerous, but I do so with all the best safety precautions I can put in place.

KB: Actually the last time I used it was in Gymkhana 8 in Dubai, and then Gymkhana Grid in Greece. So it’s already setup in the Gymkhana style engine – 600bhp, which is more than I would normally have on dirt. It’s too much power…

The suspension and tyre setup was what I’d typically use for this car on a gravel car; long travel suspension, gravel rally tyres.

TG: So, erm, no chance for the Hoonicorn to go off-piste in Terrakhana?

KB: The Hoonicorn would have been terrible here! The suspension isn’t long enough, and with the twin-turbo setup and no air filters, it would have sucked in a lot of dust, and the engine would not have lasted at all.

TG: Speaking of the Hoonicorn, what’s next?

KB: I’ll continue doing demos and videos with the Hoonicorn, but I don’t have any distinct plans for it yet.

So it’s still quite fun, just fun in a much more… frightening way.

TG: Last time we spoke, you mentioned Gymkhana 5 as your personal favourite. Is that still the case, or is the film you did with TG TV now up there?

KB: [Laughs] Well I never got into as much trouble doing a video as the one I did for Top Gear! I really enjoyed doing that one, but Gymkhana 5 is still my favourite.

The funny thing is, we’ve done videos all over the world, but never have I seen or dealt with the paparazzi that you have there in England. That was something… to experience.

TG. Quite. You ever get bored of going sideways?

KB: No. At some point it’ll get old, but right now it still puts a big smile on my face.

TG: So when do you reckon you’ll hang up the sideways boots?

KB: I’ll keep doing this as long as the fans still enjoy what I’m doing, and as long as I can still be competitive and make the best stuff, at the highest level.

If I get too old, and it’s not competitive or it gets boring, then I’ll quit. I don’t want to look bad!

But, I am one of the luckiest racecar drivers in the world – I appreciate that – and I’ll try and hold on to that unique position as long as I can.

TG: Superb. Thanks for your time Ken!