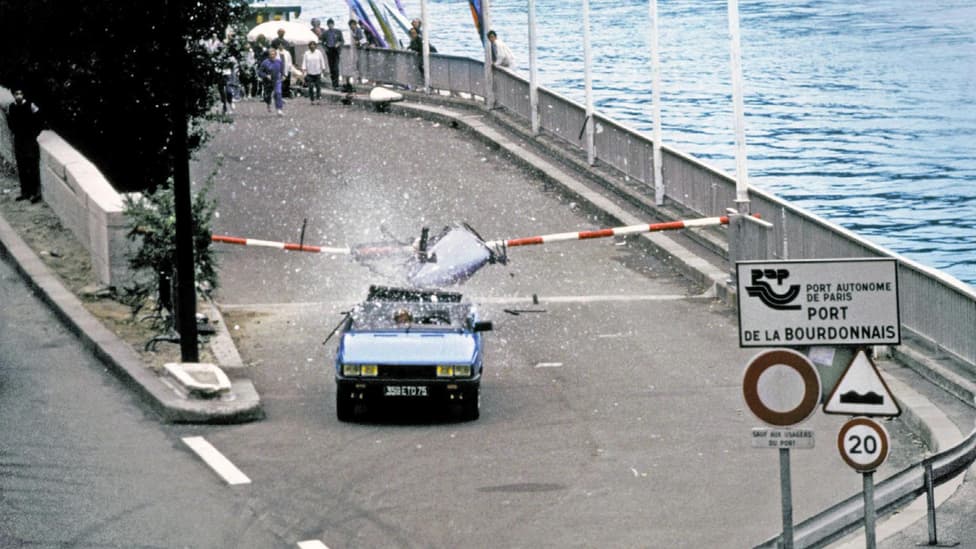 Rémy Julienne, arguably the greatest stunt driver of all time, has died at the age of 90 having contracted Covid-19. According to French news sources, he had been in intensive care in a hospital in the town of Montargis since early January. "What was bound to happen has happened," a relative commented. "He left us early in the evening [Thursday]. It was predictable, he was on a respirator."

Julienne was perhaps best-known for his work on 1969’s The Italian Job, in which his sheer bravery was matched by his peerless driving skills and the balletic precision of the sequences he devised, along with his right-hand man, Raphaël Olivotti. "We were very, very lucky to get Rémy Julienne [and his] stunt driving team," Michael Caine noted, "because they were really the stars of the film in a way." Added producer Michael Deeley, "During our initial meeting with Rémy, Peter Collinson [the film’s director] and I were delighted to discover that he was prepared to take the chase sequence even further than we had envisaged, suggesting a different range of hair-raising stunts that could be written into the script."

Julienne was born on 17th April 1930 in the village of Cepoy, and grew up riding motorbikes. By 1957, he was French motocross champion, and began his movie career doubling for Jean Marais in the 1964 film Fantômas. He would go on to amass 1400 film and many more commercial credits, famously allying with Fiat and conducting a variety of improbable stunts for the Italian giant during the Seventies. The great Claude Lelouch, (whose 1976 short film C’était un rendez-vous is a car chase classic), was once moved to call him a ‘reasonable madman’.

Although not a household name – unless the occupants of the house were car obsessives – Julienne’s work on six James Bond films was certainly appreciated by millions of cinema fans worldwide. His speciality was in making ordinary cars do extraordinary things, not least the Citroen 2CV in 1981’s For Your Eyes Only or the Renault 11 in 1985’s A View To A Kill. Then there was the truck tanker sequence in 1989’s Licence To Kill, during which Julienne expanded his core team to include a man who could make a Kenworth perform a wheelie, and another who could get it onto half of its 18 wheels.

"The tanker chase was the most dangerous sequence I ever devised," the film’s director John Glen told me. But he also points out that, for all his flamboyance, Julienne was fastidious in his preparation. "Remy never really spoke particularly good English, but we somehow managed to communicate very well. He was fantastic, a stopwatch man, nothing was left to chance. He didn’t do anything daring – it was all worked out meticulously."

As the man himself confirms. "I was a scared little boy, but I had a taste for risk. Over time, I discovered that the real difficulty is finding the right balance between doubt and self-confidence," he told France Dimanche in 2015. "You must have constant concern for perfection, precision and absolute safety while ensuring that the wishes of the director are met. My job was to calculate the risks."

Julienne worked with a number of big names during his long career, including Lee Marvin, Jean-Paul Belmondo, Harrison Ford, Robert De Niro and Al Pacino. "I shot three James Bond films with Roger Moore," he recalled. "This kind of Anglo-Saxon production is so strict that insurers refuse to let him do anything. He would say to me, 'My only stunts, I do them with women'."

In 1998, he worked with John Frankenheimer on Ronin, another memorable showcase for his commitment to panel-crunching car chase verité. But there was tragedy during the making of Taxi 2 the following year, during which cameraman Alain Dutartre was killed and his assistant seriously injured when one of the stunts went badly wrong. The French authorities alleged safety compromises, and Julienne was given a one year suspended jail sentence and €13,000 fine. He claimed that the film’s producers rejected his demand that the stunt be trialled ahead of shooting. The Paris Court of Appeal subsequently overturned the verdict.

Julienne’s sons Michel and Dominique continue in the family business, and TG.com sends them and the extended Julienne clan our condolences. Rémy Julienne was the original maestro of the car chase and a fearless cinematic pioneer. Back to the man himself, his defining moment, and the film star who he made look very good indeed.

"Very often people ask, 'what was my favourite stunt?' I’d say the jump between the two Fiat factory roofs must be the one, because it was emotional, because it was difficult. We worked on the ground, we prepared the ramps, calculated distances, speeds etc. [Originally] it was decided I had to do three separate jumps in each Mini. I explained that, as the roof was very wide, we could make the three Minis jump all together… it looked much better as a shot. It was more complicated, but really amazing."

Adds Michael Caine: "Afterwards, I said to Rémy, 'Bloody hell, my heart was in my mouth.' He said, 'Michael, it’s mathematics.'"