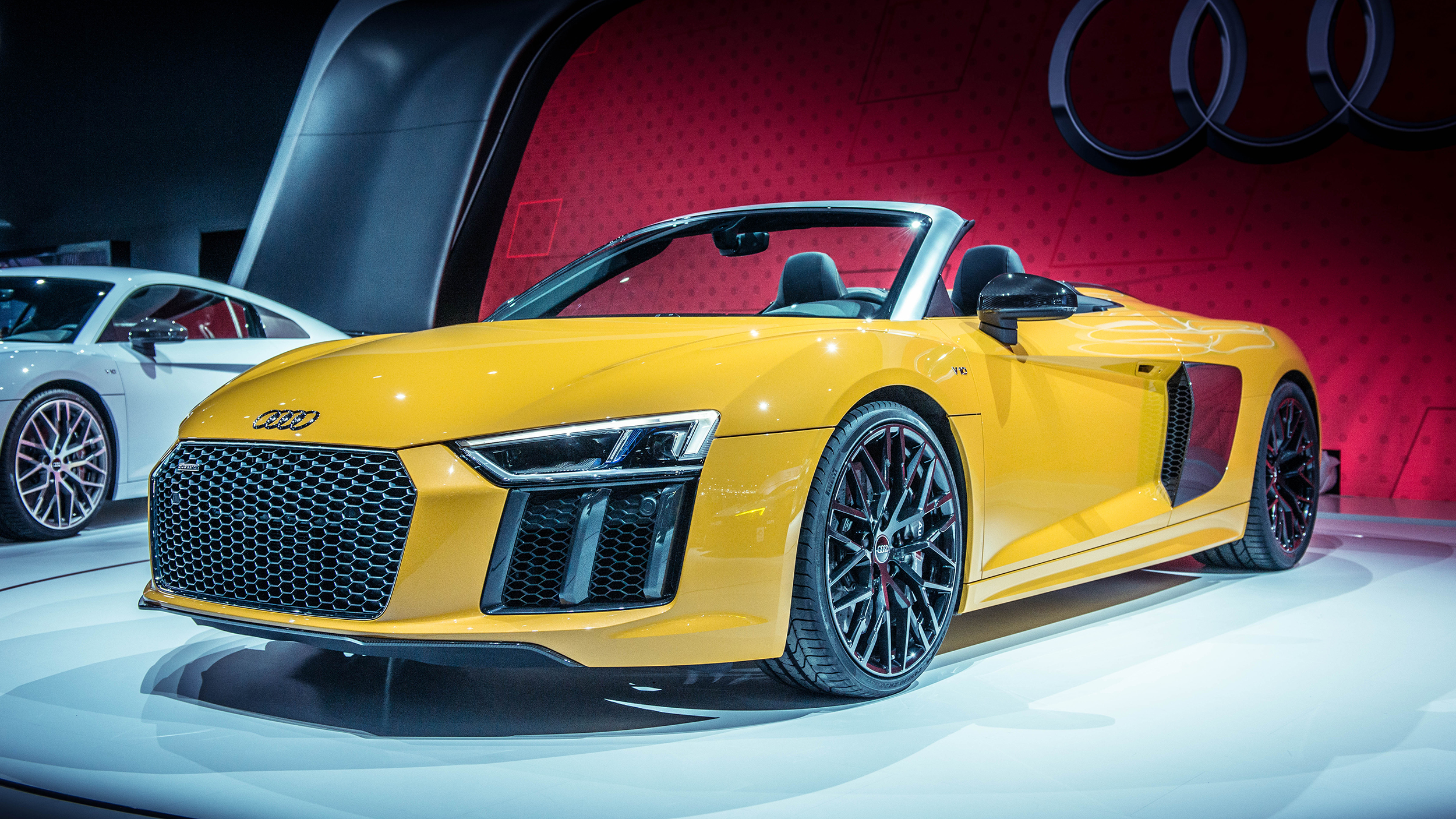 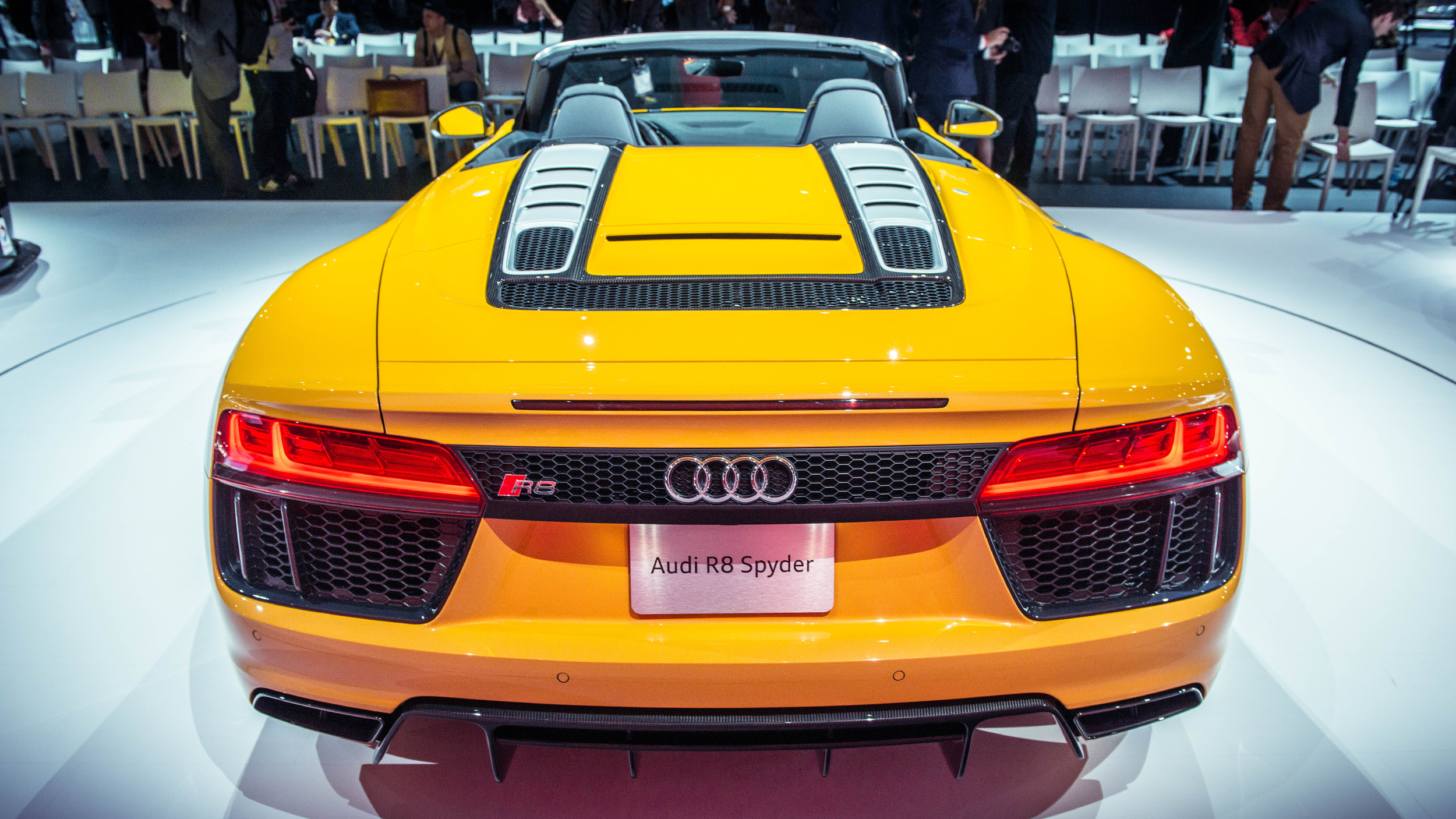 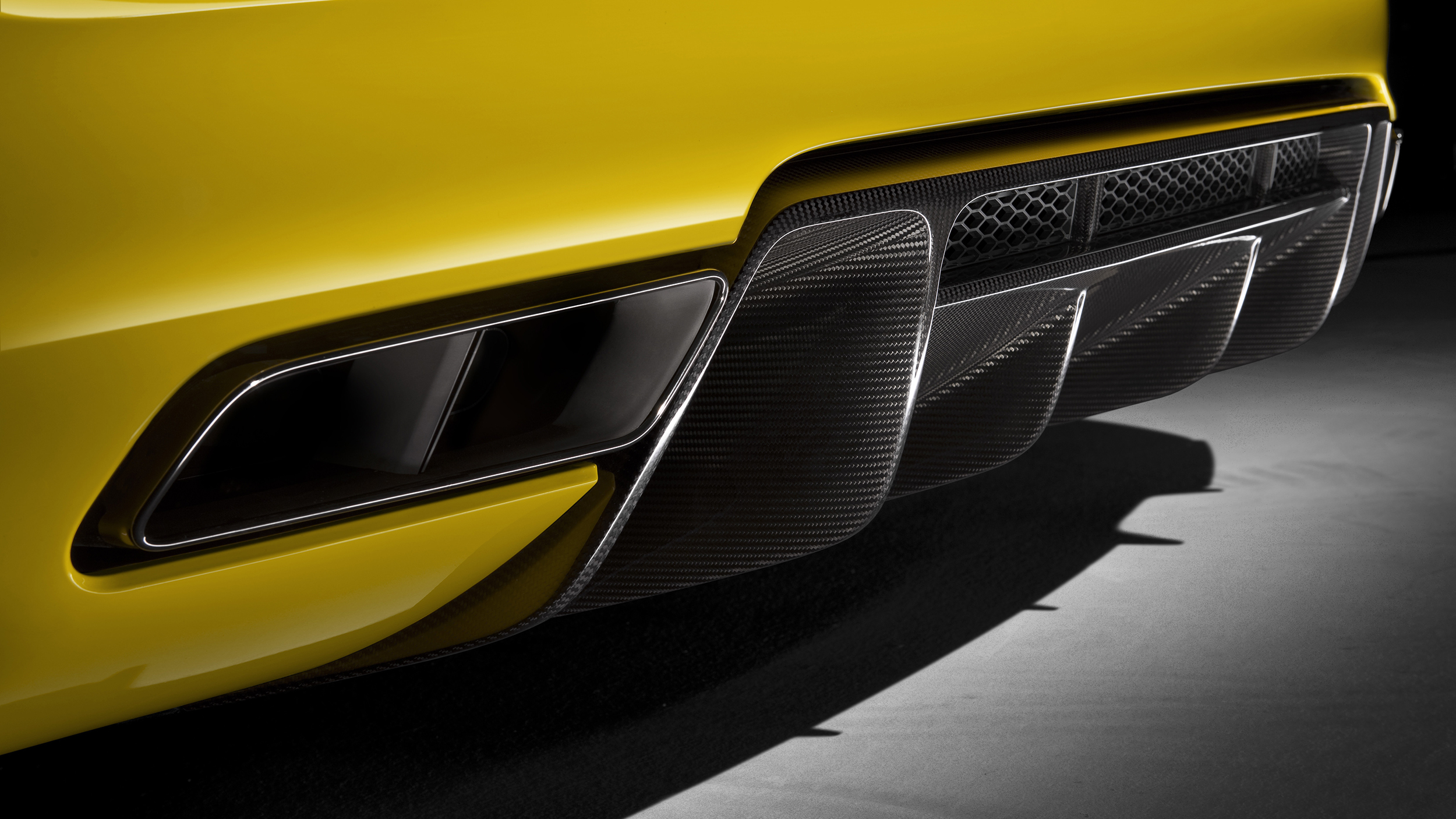 Eardrums at the ready, the new Audi R8 Spyder is here, and it’s ready to cram as much V10 wail into your lugholes as they’ll take.

It’s been unveiled at the New York motor show; odd, perhaps, given you’ll be choking on the air if you go sans-roof in NYC. Though at least it’s resplendent in a yellow not unlike the city’s famous cabs.

You want numbers? For now, it comes only with the R8’s skinnier engine, so no Plus version. That still means a 532bhp 5.2-litre V10, with Quattro four-wheel-drive helping hustle it from 0-62mph in 3.6 seconds. That’s a mere 0.1sec behind its coupe equivalent, while a 197mph speed is a completely inconsequential 2mph tardier.

Unlike Mazda’s bold new MX-5, the R8 Spyder stays old-school with a cloth roof. Thanks to its two rear fins, it stretches nice and taut, making this one of those rare convertibles that looks naturally proportioned, roof up or down.

It opens or closes electronically at speeds below 31mph, the process taking 20 seconds. As in the last R8 Spyder - and as is de rigueur in drop-top supercars - there’s a small glass window at the rear which also retracts, allowing you to still get all the delightful, multi-cylinder noise you can handle even when the weather’s too rubbish to put the roof down.

At 1,612kg, it’s inevitably heavier than an R8 coupe, but Audi has kept its mass in check thanks to a complex aluminium lattice structure below the skin. As well as stopping the R8 from becoming too portly, it also makes it 50 per cent stiffer than the last R8 Spyder’s structure.

Otherwise, it’s business as usual from the coupe. The V10 engine still has no turbos, and it still operates through a seven-speed S tronic paddleshift gearbox, while the dynamics can be toggled between four modes, with 100 per cent of the R8’s power going to the back axle during ‘extreme’ driving scenarios. It’ll drift, basically.

Want one? Prices aren’t out yet, but something close to £130,000 is likely. Oh, and if you splash out on the Bang & Olufsen stereo, you’ll get speakers built into the headrests to ensure your music isn’t carried away with the breeze when the roof is down. Relevant if the V10 soundtrack ever gets old, though we're willing to wager it never will… 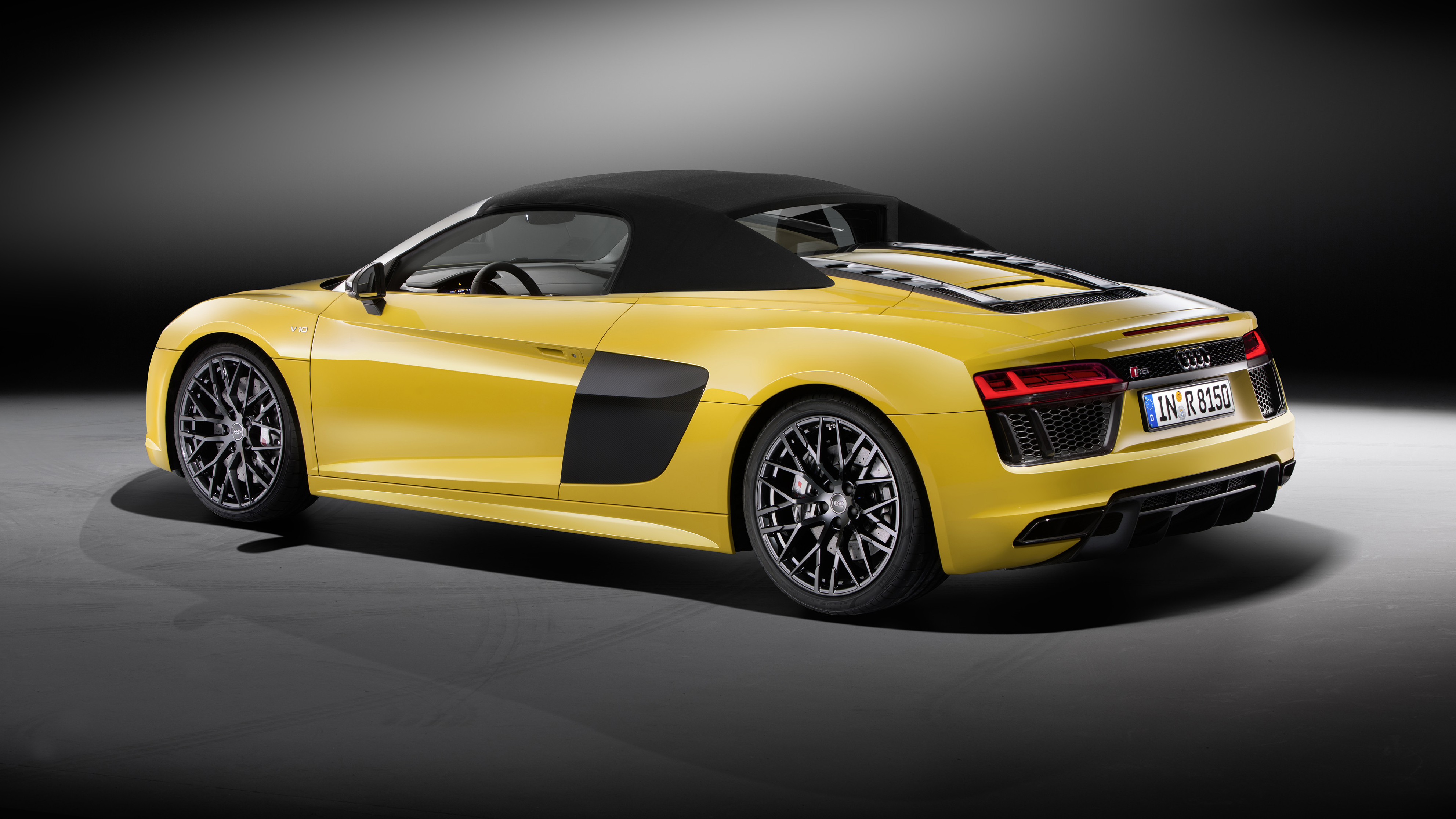 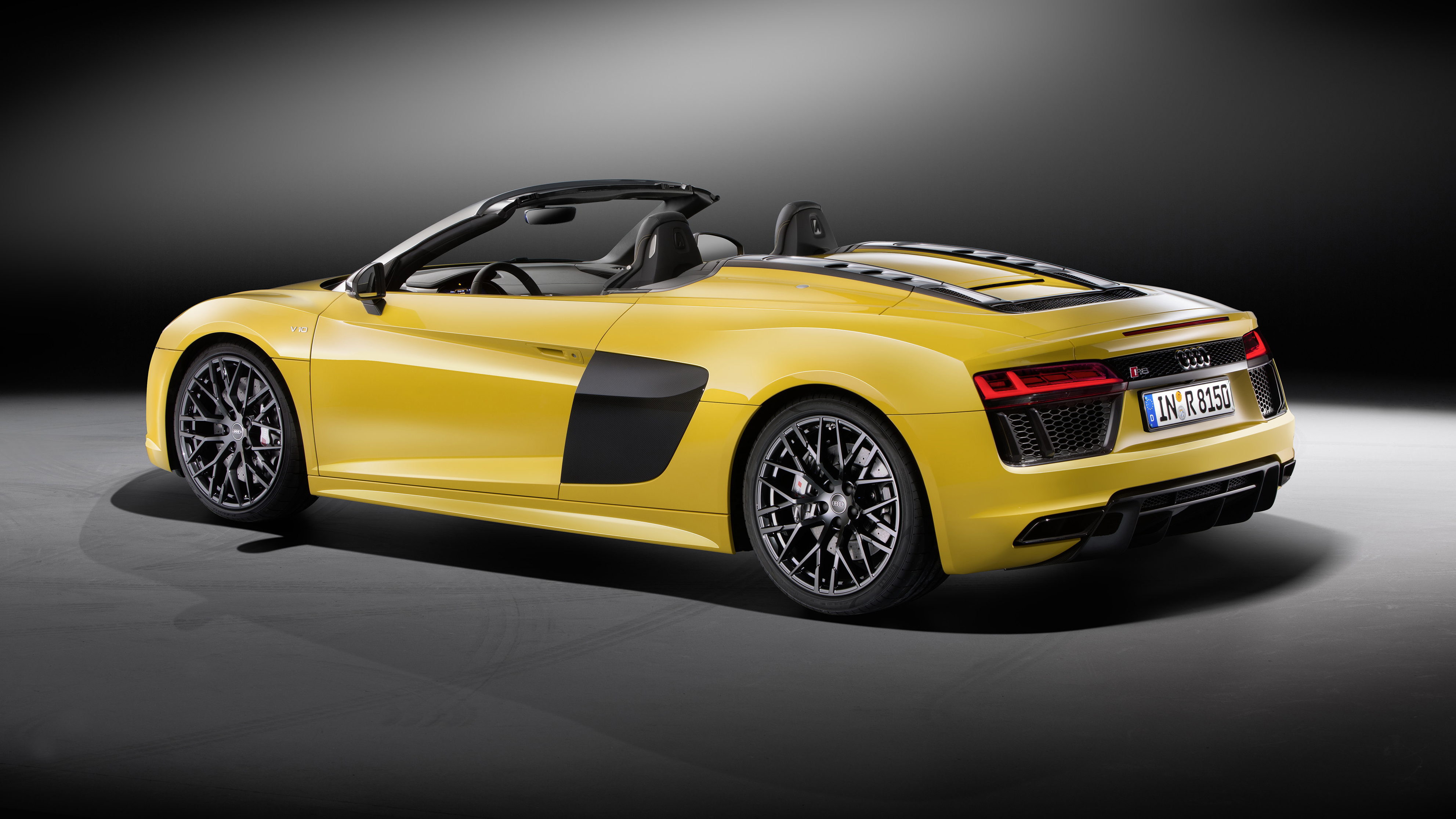