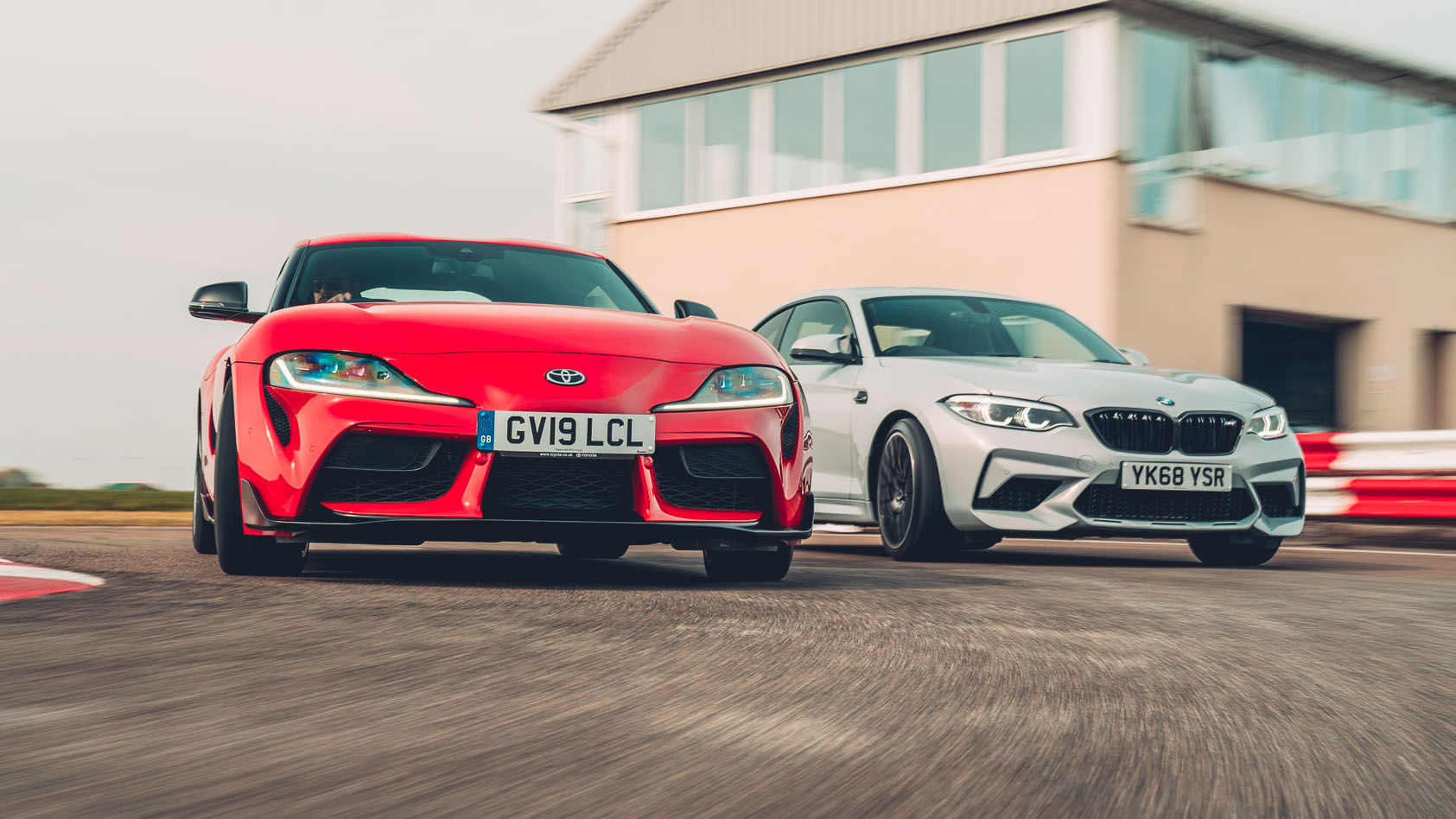 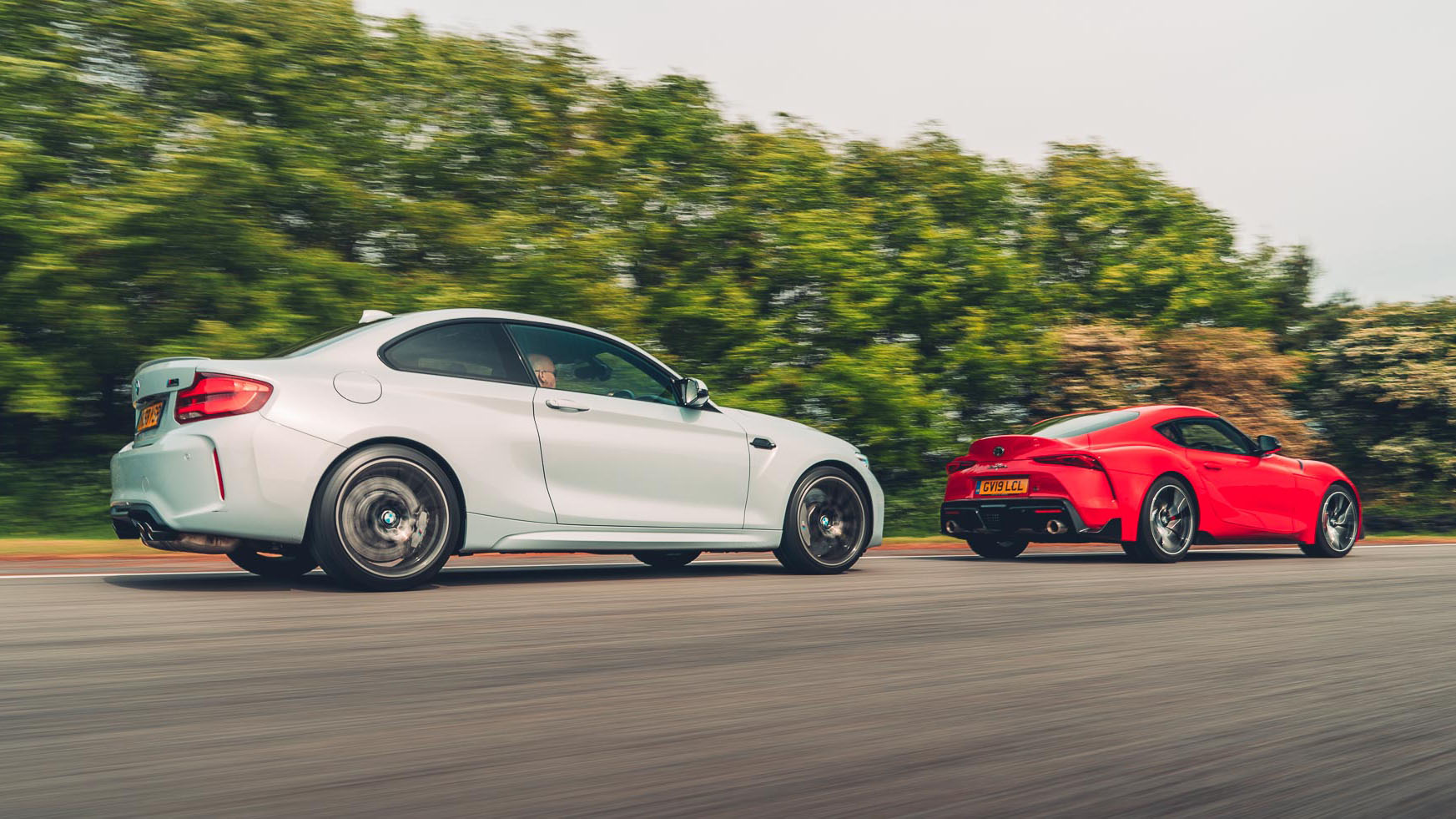 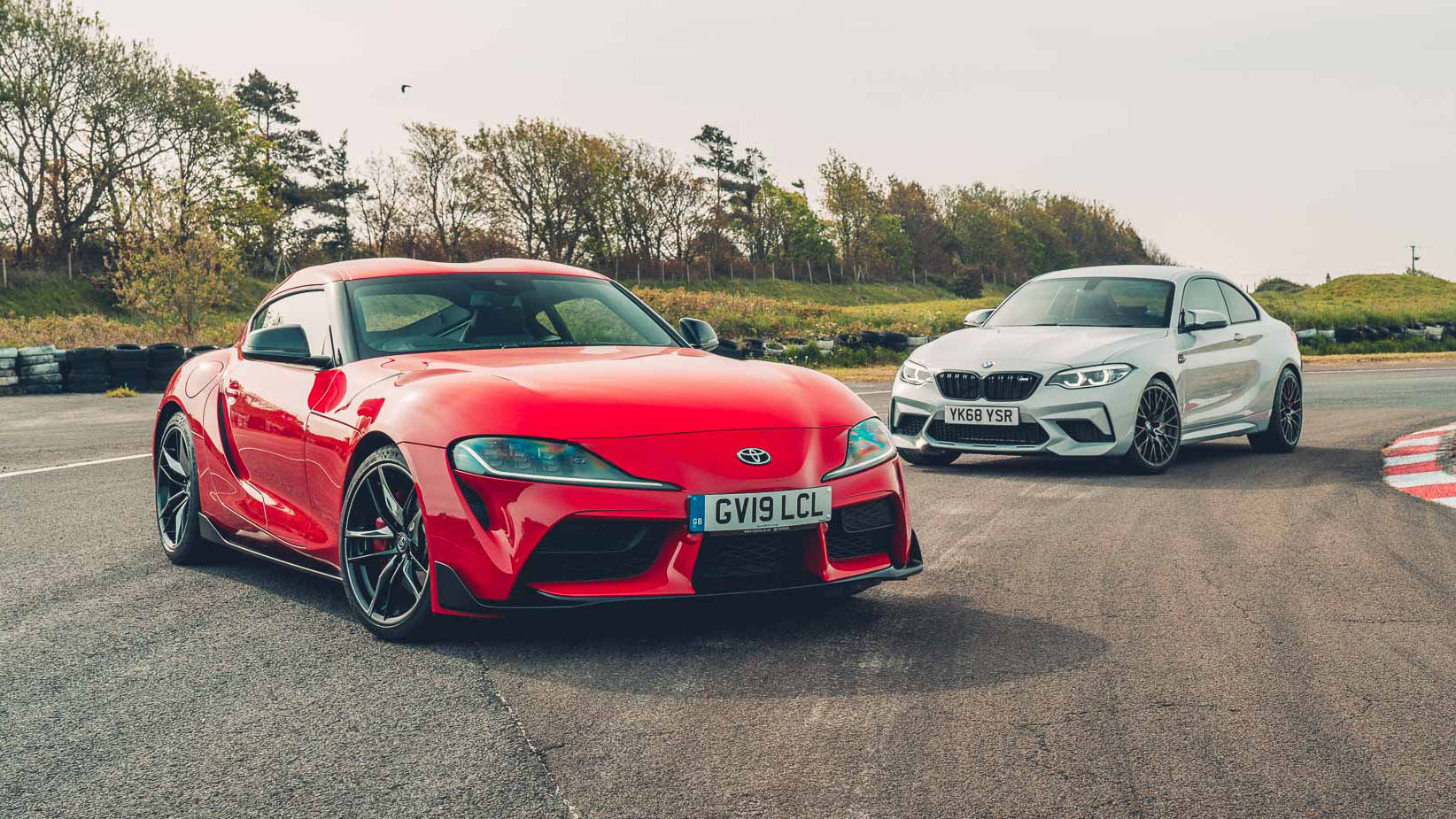 Earlier this week, the Zupra zaw off the BMW Z4. Apologies. That didn’t surprise me. I suspect that BMW never realised it was in a deadly head-to-head with Toyota – The Germans were just going through the motions of creating another roadster, while the Japanese were in a desperate need to prove themselves. Not only must their car be better than the Z4 (the humiliation if BMW built a roadster that out-handled Toyota’s comeback coupe), but it needed to be strong enough to assuage the firm’s inability to create this car itself. And that’s a much tougher, more open-ended, philosophical task.

With the parts they’ve used Toyota has done a bang up job. The crux here are those few words: “with the parts they used”. Because BMW isn’t in the business of auctioning off the crown jewels. Toyota got the same 3.0-litre straight six turbo you find in everything from the 1-Series to the X5. It got the eight-speed ZF gearbox. That’s in just about everything BMW sells, plus most Land Rovers, Jaguars, Audis and so on. Good, but hardly exclusive. What it didn’t get was the special stuff.

Near the outset of the joint project, BMW’s representatives apparently confided to Toyota that they’d never done a sports car before. This had me stumped for a while. But then I realised – no, of course not, because that’s not BMW’s job. 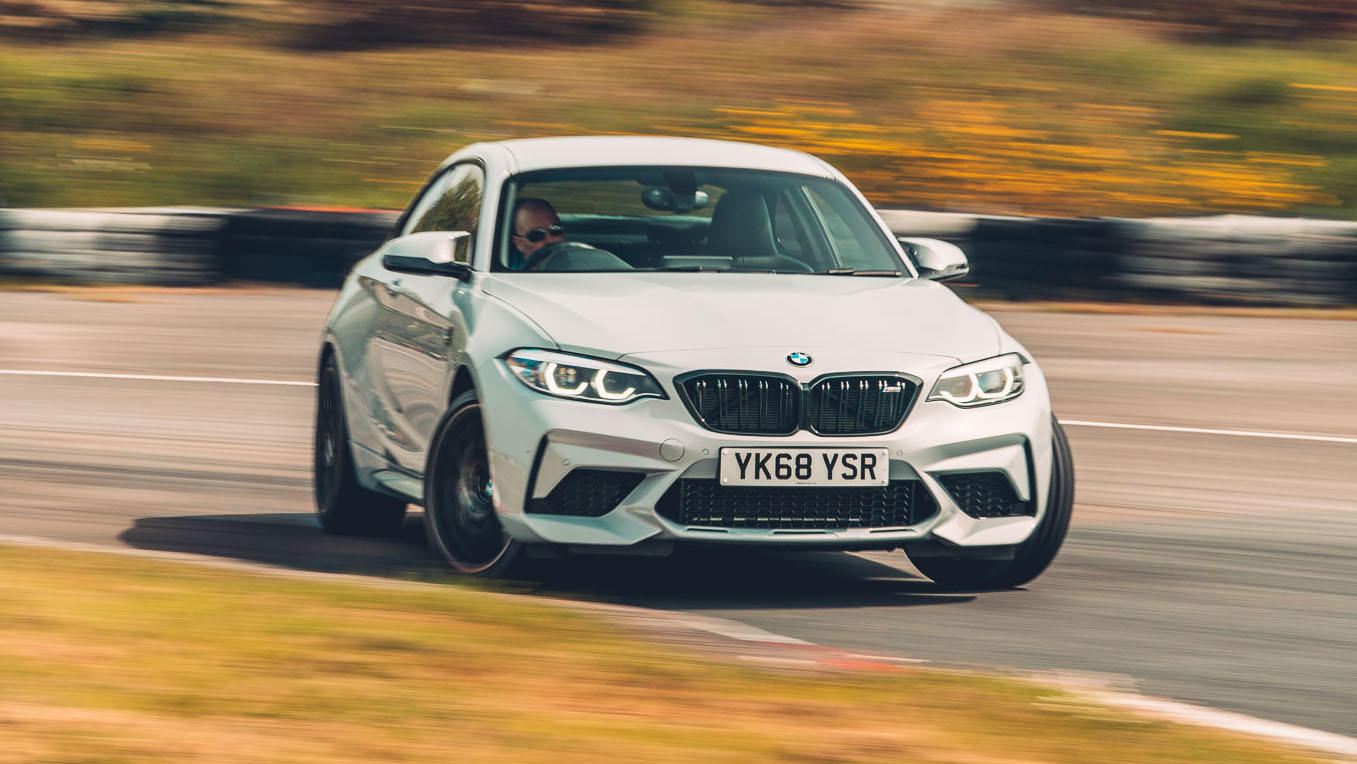 That’s M division’s job. As it happens they’re pretty good at it. So here the 3.0-litre turbo 8spd auto Supra goes up against the 3.0-litre twin turbo, 7spd DCT twin clutch BMW M2 Competition – a veritable look-at-what-you-could-have-had of special stuff. And perhaps more remarkably, for less money. £51,030 plays £54,000 for the Pro spec GR Supra (although you can guess which one offers more kit for the cash).

Statically both have some visual force. You notice the Toyota from a long way away – it’s low and red so of course you do – but closer up the exaggerated curves keep the eye busy. The BMW is a simpler structure, a three box, two door, four seat coupe. The impact comes from lower down: this car has stance.

It’s like BMW designed the bodywork, looked at it and went, “right, now we make it drive like that”. Because that’s exactly what it does. It feels very broad shouldered, doesn't roll much, is stiff, connected and direct. Until the tyres get heat there’s not much traction and even when they do you need to be on your game, because this is a snatchier car at the limit than the Toyota.

The Supra is calmer and more benign. Roll is really well managed and communicates available grip well and the whole car is more laid back on track, even when you really get on it. If you do, it’s not quite as tight and together as the BMW, eventually struggling for body control and brake bite. Up to 80-90 per cent it’s bloody good though, the steering (wouldn’t mind more weight) is accurate and it’s much less intimidating than the BMW. The pleasures are simpler, more easily accessed. Although the wheelbase is short, Toyota has pulled off the neat trick of not only making the Supra agile on the way into corners, but stable on the way through and out. Traction betters the BMW on all corners, fast and slow.

The Supra is a one-trick pony: the turbo blows, force arrives, then it tails off

But what you don’t get is the same direct link between input and reaction. There’s a slight delay while the suspension compresses or the turbo picks up or the gearbox gets the shift done. Everything in the BMW happens with more urgency. It goads you into misbehaving and on a circuit that means it’s pure hooligan fun. It also reminds you just how much more impactful and exciting a twin clutch gearbox and 404bhp/405lb ft twin turbo M engine are than the Toyota’s auto/single turbo set-up. It’s not slow the Toyota, and it makes a nice enough noise, but the M2’s powertrain gets under your collar in a way the Supra’s just doesn’t.

I really enjoy the way it goes down the road, properly energetic, a bit stroppy and hurled along by the best motor. The Supra is a one-trick pony: the turbo blows, force arrives, then it tails off. Not much point using anything beyond 5,500rpm as there’s so little reward and torque tails off. The M2 has more range, more bite, more charisma. Good grunt low down, rasping soundtrack, a hard kick at four-and-a-bit, a mighty lunge to the 8,000rpm limiter, and a whipcrack upshift. It’s addictive. I find myself going slowly just so I can accelerate up through the gears, then use the brakes to slow. And repeat. And again. Not that the brakes are that impressive – for M Sport stoppers they need more pedal feel.

Does the BMW know how to back off and behave? Mostly. It’s just that you don’t want it to because it’s playful and aggressive and you’re having a great time. OK, it will do the daily grind stuff, but the gearbox complains at low speed, the diff is very tight on mini-roundabouts and the ride never less than positive. It’s a busy car. But you bought a sports car so what did you expect? It’s got personality, that’s for sure. 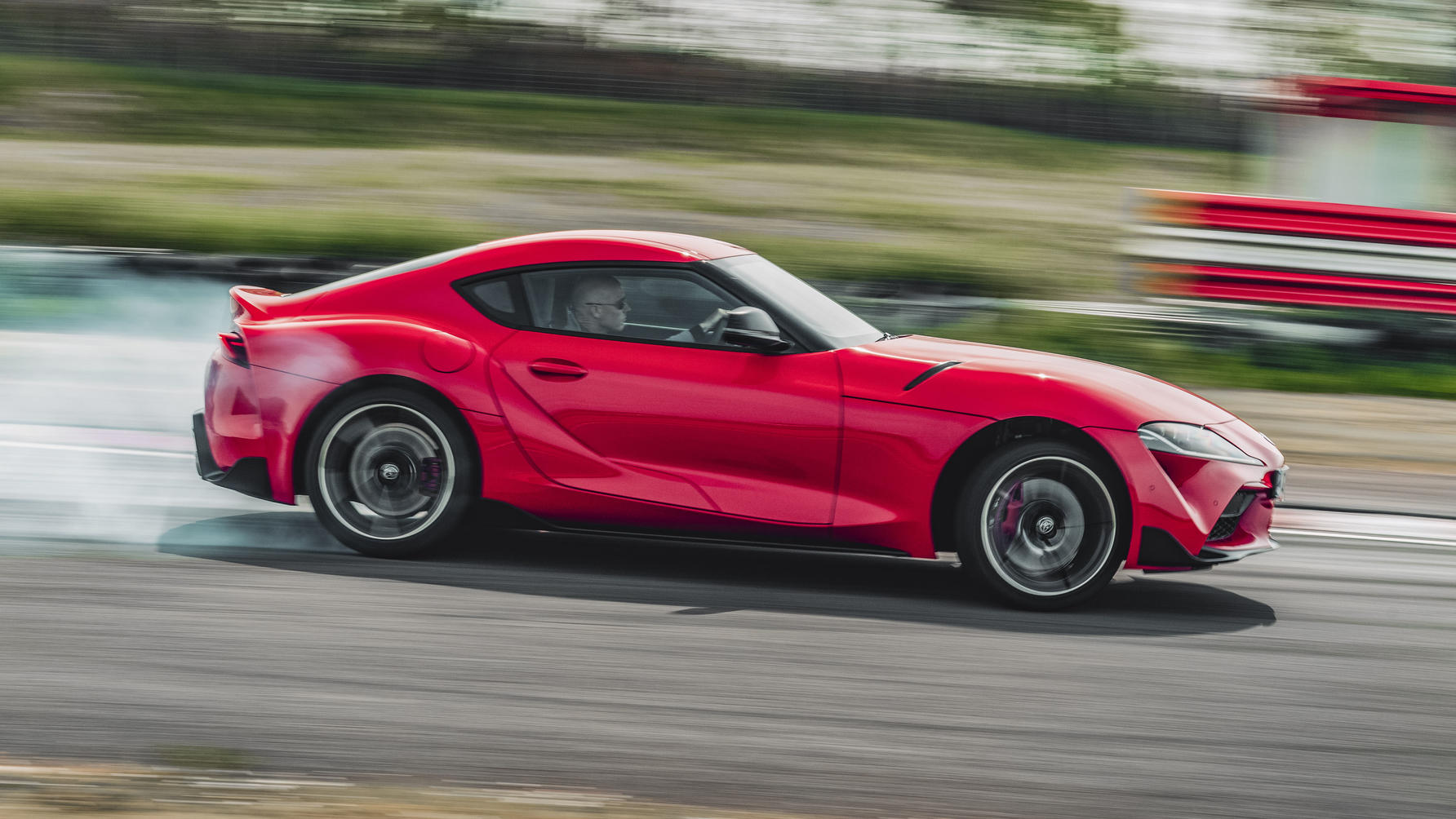 And I reckon that’s the one thing the Supra lacks. Technically it’s very proficient, but during the process of going to BMW cap-in-hand, coming away pushing a branded trolley filled to the brim with every component needed to build their new car, and then developing it, Toyota was unable to inject much character. Or to disguise the BMW character. How much of an issue is this? Not much if you’re looking for an everyday sports GT and don’t have any particular brand affiliation. If that’s you, you’ll get into the Supra and think it’s well built from quality materials that are nice to touch – much better than you were expecting from a Toyota. In fact only the rev counter jars, looking a bit shiny and out of place. That’s the only major Toyota part I can spot. It’s snug and enveloping, the seats are good and you look out over a long bonnet.

In comparison the M2 mounts you on a booster seat and gives you light. Visibility is much improved, but it’s not so sports car-like. Very familiar typefaces, fonts, instrumentation and so on. Plus rear seats and a boot for actual practicality. You could put an actual booster seat in the back.

Be hard to rein yourself in for family duties, though. It’s got some attitude, the M2, a forceful personality which makes you overlook the lack of brake feel and abrupt suspension. It stomps, twitches and roars along, a barrel-chested, boisterous ripper. The kind of car that wants to show you a good time, all the time. The Supra doesn’t have this force of personality – but how could it? And maybe that’s not what you want. In that case I’d say you weren’t looking for a sports car at all, but something to replace the Audi TT, something distinctive and a bit more exclusive that’s not going to ask too much of you. That’s being slightly unkind, because the Supra does have talent, it does have finesse and it is enjoyable. But don’t we want our sports cars to have a bit more oomph than that? And oomph is not something the BMW M2 Competition is short of.