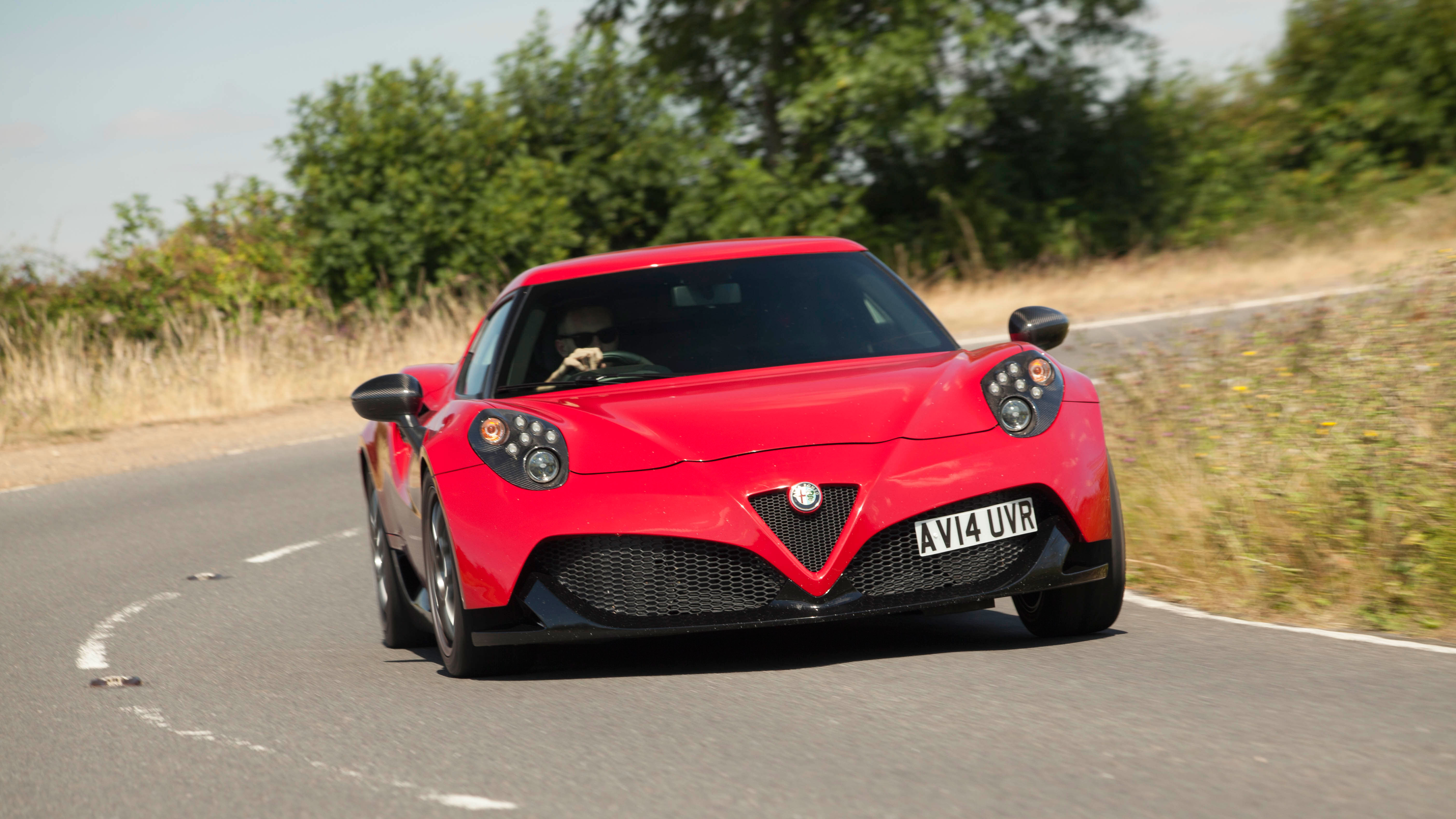 That’s an Alfa Romeo 4C. Why is the bottom half black and angular?

Because this is the AlfaWorks GT4C, and to show off its new carbonfibre front apron, side skirts and DTM-alike rear diffuser, it’s picked out the optional panels in black. But the coats of paint are wafer-thin, so as per the iconic Ferrari F40, you can catch the carbon’s weave glinting through the laquer in the light. So cool.

Is that it? A bodykit?

No, it’s the tip of a very pretty Italian iceberg. AlfaWorks, based in Royston, Hertfordshire, can do many things to your 4C. They can fit it with these track-ready Toyo R888 rubber-wrapped 17 and 18-inch Oz Racing wheels, saving 10kg in unsprung mass.

You can have a gearbox software remap, a suspension fiddle and, of course, more power. This car has all of the above, an engine remap taking the 1.7-litre turbocharged engine from 237bhp to 277bhp. AlfaWorks reckons it’ll do 0-62mph in 3.9 seconds, and they decided 170mph was ‘enough’ when checking out the top speed.

But what about the 4C’s, erm, distaste for British-flavoured tarmac?

That’s the bit we’re here to investigate. I’ve always sensed that I’d happily put up with the 4C’s hyperactive motor, unpredictable gearbox, interior maladies and skateboard ride if it didn’t tramline so aggressively. You’re rarely able to enjoy the unassisted steering because every metre the 4C travels is spent managing the steering as it hunts out cambers, crowns and gets startled by drain covers.

For a philanthropically cheap £450, AlfaWorks will adjust the 4C’s geometry. The idea is to introduce more castor, or, as AlfaWorks’ own Jamie Porter puts it, "have the car give you more of the messages you want from the steering, and less of the noise you don’t".

Emphatically. Within ten yards this feels like no 4C I’ve ever driven. The steering’s weight is more consistent and linear, and as the miles rack up it happily obeys motorway lane changes. You’ve got so much less management to do just to maintain a straight course. It’s really lovely. And that means you’ve got more confidence in actually getting stuck into the rest of the 4C’s abilities.

…which AlfaWorks has also had a fiddle with, right?

Yes. At first, I struggled to notice the engine's extra 40bhp, but that’s because of the second-most valuable mod AlfaWorks has made – a new anti-resonant exhaust which leaves the turbo whistle and gruff four-pot note alone, but deletes the reverberating drone that plagues the normal car’s ‘Race exhaust’.

It’s now possible to hold a conversation in a 4C above 40mph, though the Parrot hi-fi remains totally indecipherable. The politer exhaust is simply a must-have. Be warned, though – you might find yourself traveling a good 30mph faster than your ears tell you.

The gearshifts are now more logical and the power delivery is less stepped. Apparently the standard 4C’s dead spots midway through the rev range were caused by the turbo briefly overboosting then dropping back to normal pressure. Solution? Simply turn the boost up to the maximum possible, says Jamie. That way, it’s always working at 100 per cent. That’s engineering TopGear.com can get behind.

So far so great. What else?

Well, you’ll have spotted the gorgeous telephone dial alloys are missing. We’re down an inch in front and rear, and this car’s wearing much stickier tyres, to make the most of Eibach springs with ten-way adjustment depending on how you’re planning to use the car. In an intermediate set-up (and with no temperature rubbed into the tyre surface) the GT4C is glued to the road.

The front end’s grip is unimpeachable, and you can feel the rear scrabbling just a tad on the exit of turns, helping straighten the car. The rear is that bit more precise because this one’s had much of the rubber mounting gubbins removed.

How does it compare to a Lotus or Porsche GT4 now?

It’s still not as delicate – you don’t think the car between bends and simply look at the brake pedal to trim off speed on the way in. It still needs a bit of manhandling, a bit of brute force, because the efforts required for the controls are that much higher than the best British and German sports cars. That’s not a criticism. It just means the Alfa exists in its own space, and has its own charm, that you’re more encouraged to enjoy more of the time.

You probably won’t, because as tested this 4C would set you back £82,500. Lovely as this car is, you don’t need to spend that much money to bag a great, sorted 4C. Having driven the all-you-can-eat car, I’d select just the geometry rethink and politer exhaust from the menu, and perhaps come back for the gearbox update in due course. You could realistically select that and have a 4C for the right side of £60,000, and at last enjoy this gorgeous machine as much as the people looking at it.