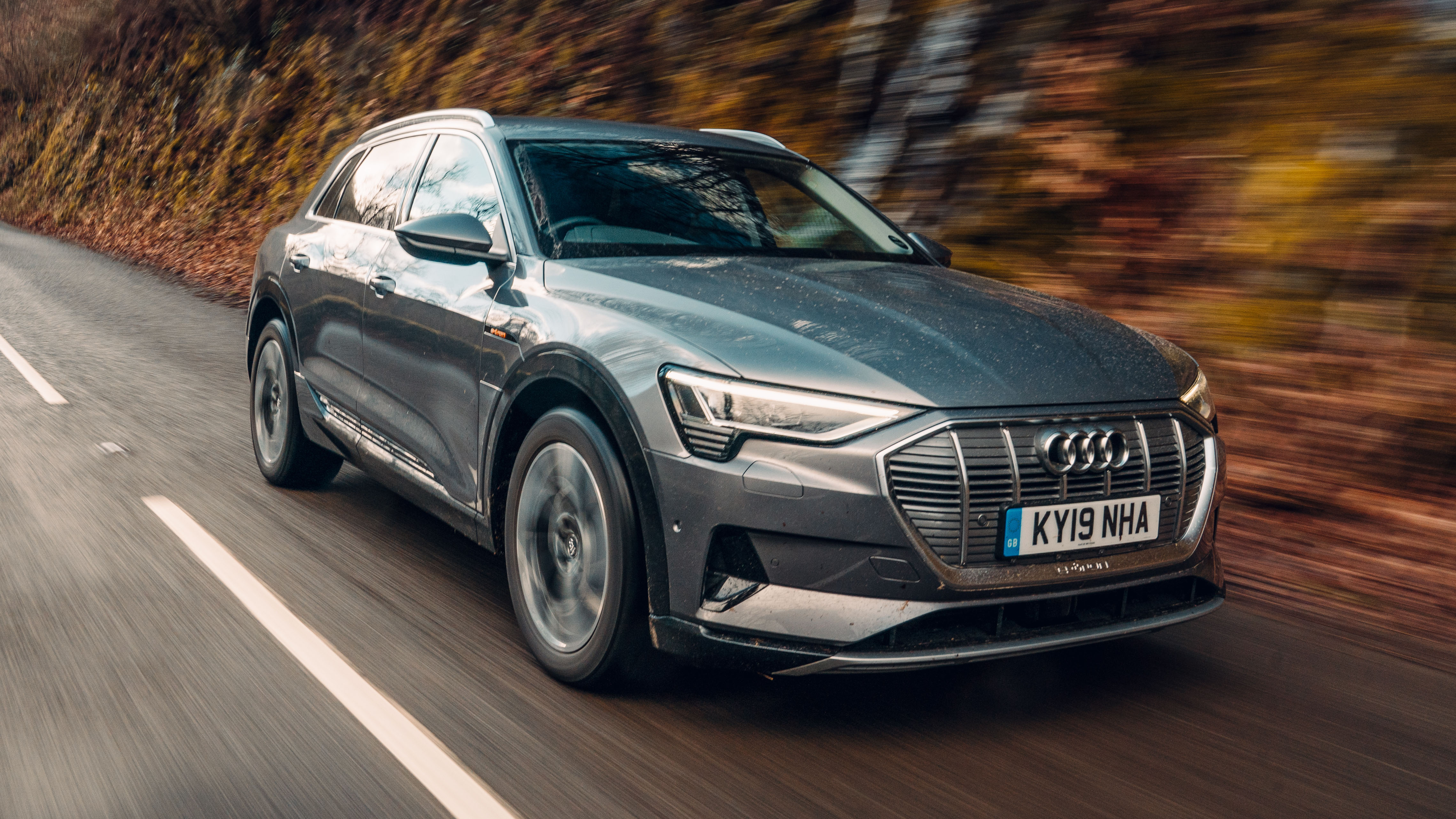 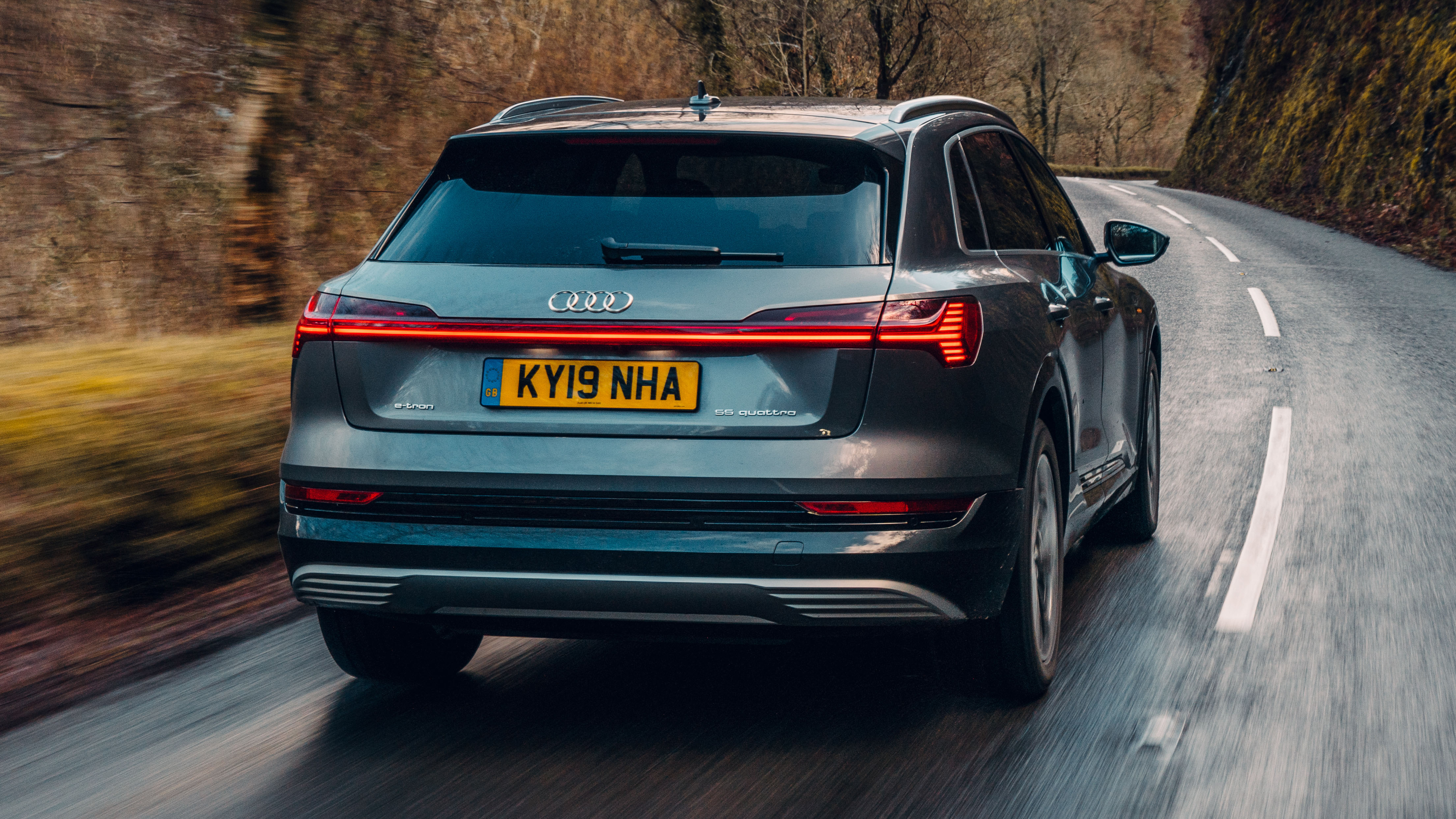 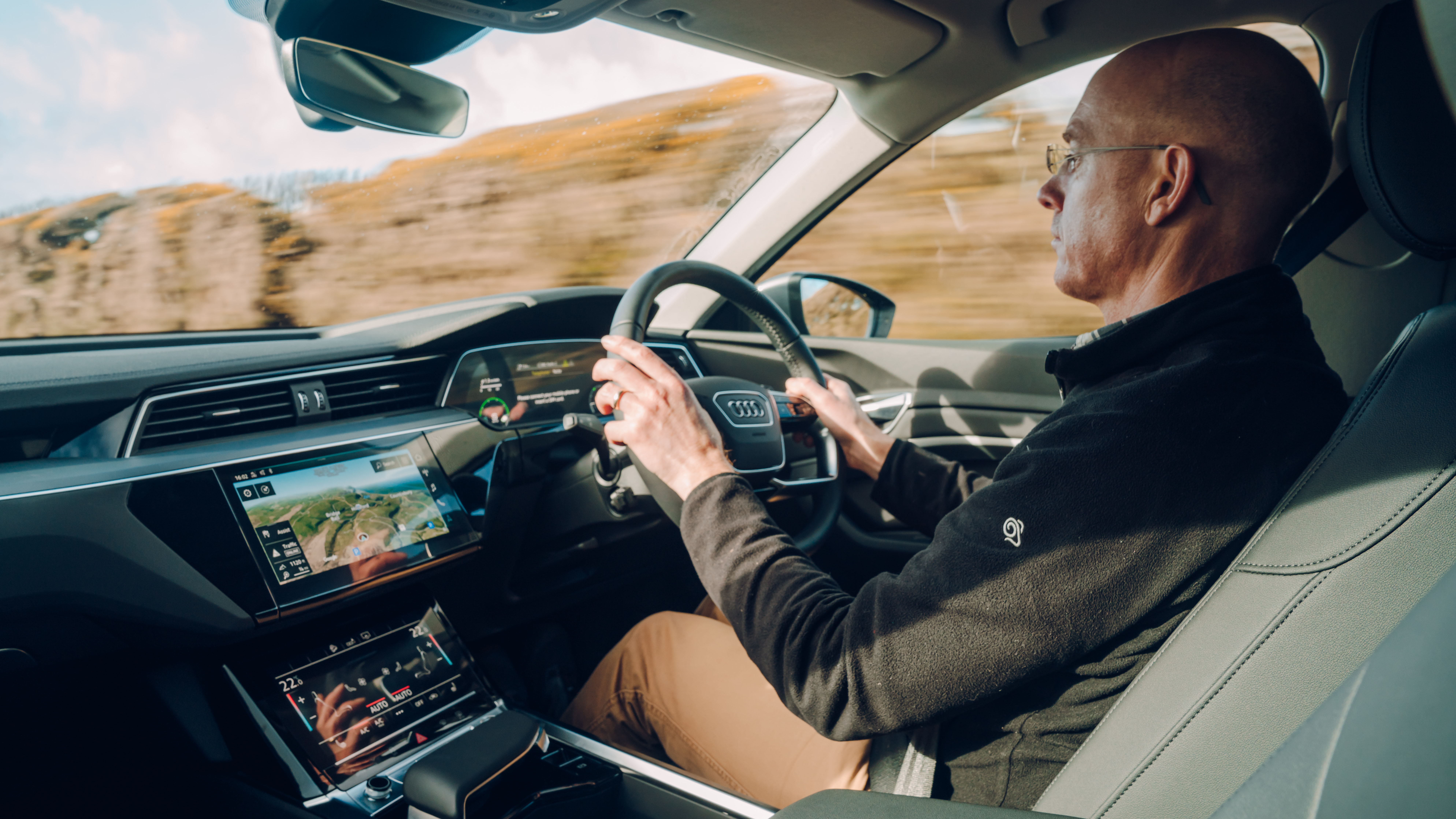 Hard to tell though isn’t it? Not a car that shouts about its electro-credentials with radical design. Quite the opposite in fact. A car designed to make precisely no statement about electrification at all. This is the future of course. To convince a mainstream audience to make the switch you can’t go scaring them with radical design.

You can tell the e-tron has been to more clinics than a GP. The size (5-seat only, bigger than a Q5, smaller than a Q7), the shape (traditional SUV, with a vaguely altered grille), the cabin (a moderately interesting new gearlever, but nothing else unfamiliar). It’s been carefully, timidly conceived to appeal to as broad a cross-section of the EV-tempted as possible.

Appreciate that, but there’s a lot of cars in that sector right now, everything from specced-up Velars to the new BMW X5 and Merc GLE, plus outliers such as the Maserati Levante. Even top spec estates fall into this bracket. So it’s quite a big pool the e-tron is belly-flopping into.

Just 10kg shy of 2.5 tonnes. That’s because it’s built not on a bespoke electric platform, but the same underpinnings as the Q7, modified to cope. But Audi has beaten its German rivals to the punch - the Merc EQC doesn’t arrive for a few months yet, and BMW’s iX3 won’t be here until next year. But you can buy an e-tron in the UK now, with prices starting at £71,490, which the current government grant will kindly knock another £3,500 off. Actually you can’t have one right now, as Audi will be fulfilling the 1,000+ advance orders for the first few months.

If they currently drive a modern Audi, undoubtedly. It’s largely identical. Same triple screen layout and plethora of menus, same switchgear, attention to detail, quality. There’s very little radical in the options list either, with the exception of one item: the £1,250 virtual door mirrors. These replace the side mirrors with cameras outside and screens on the doors inside. They do reduce drag meaningfully and are a proper talking point. Our car didn’t have them, but I used them when I first drove the car late last year. Don’t have them. A good gadget is one that does a better job than the one it replaces. These don’t. The screens are mounted too low, and while you can vary the view in a mirror by moving your head, here you can’t. And you have to combine them with other options, so they’ll actually cost you a minimum of £1,875.

Other stuff inside: the twisting gearlever works perfectly nicely and although it’s not the most attractive piece of design, the deep centre console provides loads of storage.

Further back it’s less good. The e-tron isn’t actually that big inside. The rear row is reasonable for two, but the middle occupant is going to clout their shins on the centre console’s rear extension, and while a 660-litre boot sounds decent, in practice the floor area ain’t that big. If you want space inside, the Tesla Model X delivers it better.

Will it work as a long-range family car?

Well this is the crux, isn’t it? You’re going to have to adapt. Those drives to the continent where you despatch the whole of northern France on a single tank of diesel are going to get longer. Audi claims a range of 241 miles, but in practice we were getting less than 200 miles from a single charge of the 95kwh battery, at an average of 2.2 miles per kwh rather than the 2.56 they claim. Bolt on a roofbox and you’re going to knock another 50 miles off that.

The problem won’t be frequency of stopping though, it’ll be the infrastructure. Will the charger work? How fast will it charge? This is the plight of the early adopter, and while the e-tron might be a very conventional car to own and drive, when you’re charging away from home you’re at the mercy of energy suppliers. This was Tesla’s genius of course. The Supercharger network charges over twice as fast as the quickest units we found for the Audi and feels like a first class experience.

How does the e-tron drive?

Just as it should, which is perhaps the biggest compliment we can pay it. It’s not as taut as a Jaguar I-Pace, but why should it be? This is a family SUV. So it wears chunky 50-profile tyres and rides beautifully. It’s not just the cushioning and control of the ride, but the suspension’s noise insulation. It’s ultra-refined and so feels rather luxurious. The combination of the weight, the silence and softness means the experience is Bentley-esque.

And when you remember how much it weighs and what the tyres have to put up with, your appreciation of the handling rises a notch or two as well. There’s no feel or texture to it, but why would you care about that anyway, all you want is confidence and enough poise and precision to keep itself together on a tricky road. And it does that. It can actually be hustled with a bit of verve and it doesn’t lose control. The steering is maybe a heartbeat slow in reacting to inputs, but it’s clear Audi spent a long time honing this to get it just as they wanted it.

And is it fast?

Not by Tesla standards. It might have over 400bhp and near-enough 500lb ft, but the 0-62 stands at 5.7secs. However, it’s fast enough because you can use all of that without making any noise or driving anything other than very smoothly. And with no anti-social aspects to the performance, you find yourself using it more.

Better than that though is the precision of the throttle. This sounds such a small thing, but it makes controlling the car – and using the available brake regeneration - much more reassuring.

Speaking of that, as standard the Audi doesn’t brake very much when you lift off (another example of how far Audi has gone to make sure the e-tron doesn’t do anything people won’t expect). If you want to use regeneration, you have to pull the paddles – clicking the left is like downshifting, increasing electrical braking through two additional levels.

It’s pretty much the same money as an SQ7 actually. And that’s an excellent car. If I was doing regular long-range trips and hauling the family I’d still have that. More fun to drive and having used the electric infrastructure a lot over the last few weeks, the thought of having to keep kids entertained while you try to kill yet another hour at a motorway services is more than I could bear.

If however, it was going to live a life of commuting and school runs, then I’d find owning and driving the e-tron a source of pride. And I’d be saving money, since even the 2.0 miles per kwh we achieved equates to a diesel doing nearly 80mpg.

The truth, I suspect, lies somewhere in the middle, making this a fairly open ended choice. Just go into it with your eyes open.

The e-tron is for electro-sceptics. And by god does it do a good job of convincing them they don’t need to be scared of the future. The only thing that’s going to unsettle you about the e-tron is how quiet and smooth it is.

Not just quiet and smooth, though. The quietest, smoothest electric car I’ve ever driven. This is Audi laying down a marker for those that follow.