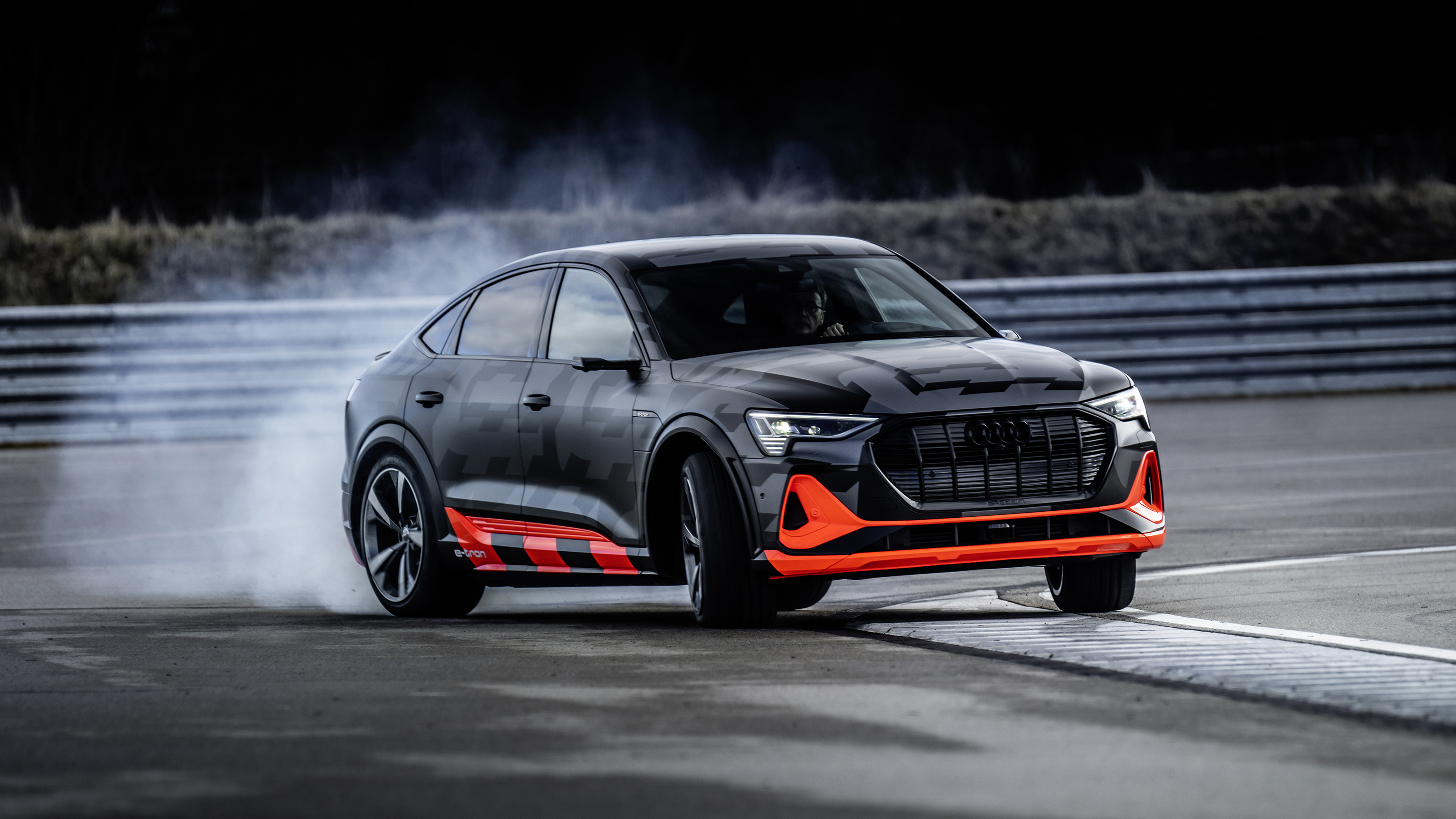 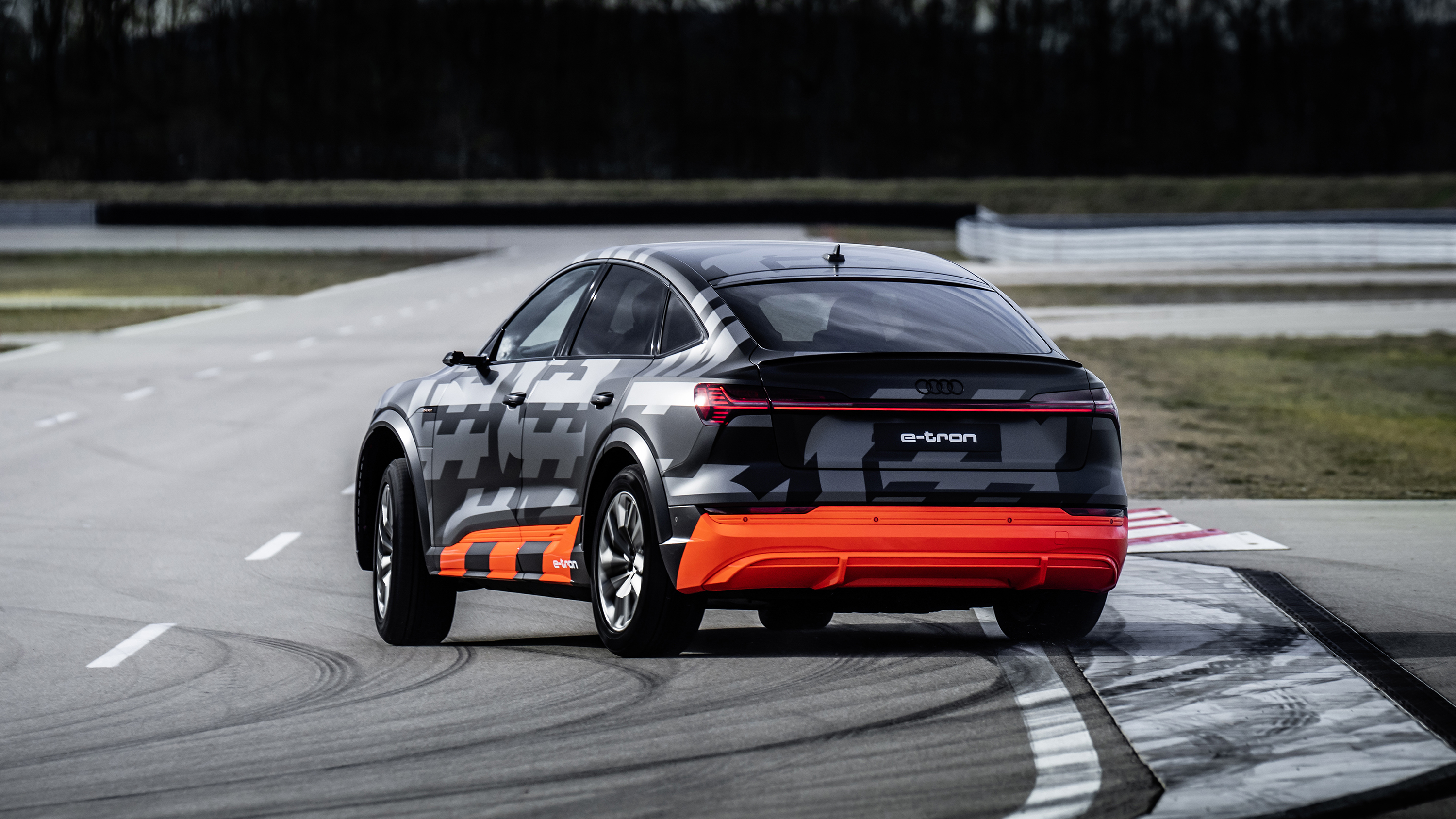 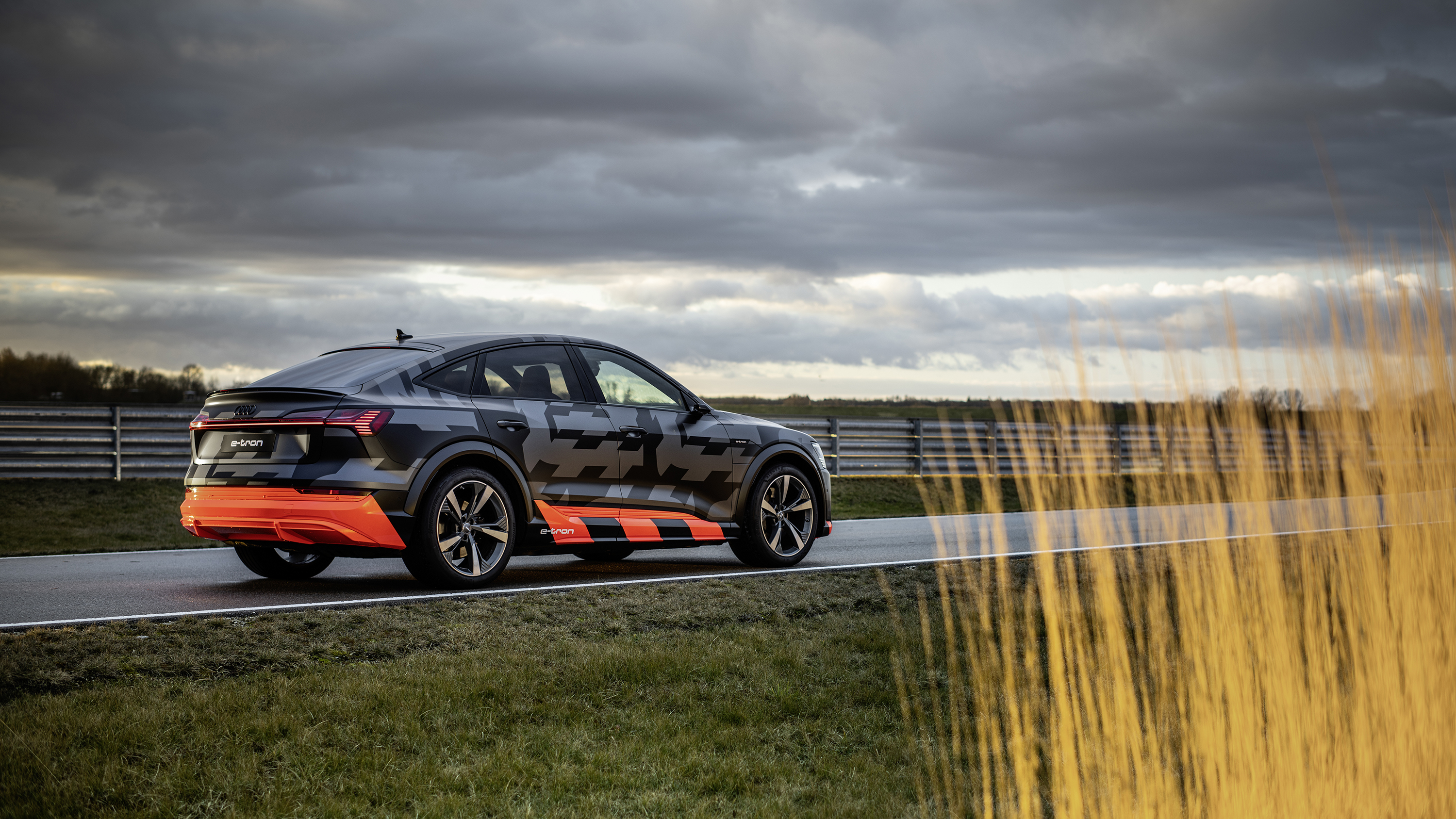 I’ve not seen many Audis do that…

Nor have we. This is the Audi e-tron S, and if its eager engineering team is to be believed, it helps mark the dawning of a new, driftier era for quick Audis.

Yep, and this one is more electrified than ever. The standard e-tron uses two electric motors, one at either end of the car, for totals of 402bhp and 490lb ft. The e-tron S adds an extra motor to the rear axle for peak outputs of 496bhp and 717lb ft, with the ability for 90 per cent of its propulsion to come from the rear axle.

Hence the drifts. While we’re meant to treat the e-tron S like any other S-badged Audi –think of this as a higher riding, plug-in S6 Avant – it’s got a much bigger sense of humour. Bigger than almost any Audi before it, short of rear-driven versions of the R8 supercar.

It’s the way the motors operate. The standard e-tron uses two different sizes of motor, with a smaller one at the front axle. The e-tron S flips the two around – putting the larger one up front – but pops two of the smaller motors at the rear axle, and they operate independently to create a torque-vectoring system that will yield powersliding fun without the need for a traditional, mechanical differential.

As an S-badged Audi, though, it needs to be sensible too. So the way the power is shuffled around varies depending on which of the drive modes you’re in. Comfort sees power spread roughly 50:50 front and rear, but Dynamic can see the split as wide as 10:90, with torque distribution constantly varying according to conditions – even off-roading conditions… as if one of these will ever head into anything approaching wilderness.

Oh, and given how much this steps into Tesla’s territory, you probably want to know a 0–62mph time. It’ll do it in 4.5secs, over a second quicker than a stock e-tron.

Tell me about the drifting.

This isn’t suddenly an outlandish drifter, but the e-tron S will very much perform for camera, if you ask it to. In Comfort it provides an unflappable four-wheel-drive experience; cheeky little hints of power being deployed at the rear, but only ever for a neat, tidy and utmost professional cornering attitude. This is the car for when a snowpocalypse suddenly strikes and you’re still intent on getting home (so long as you’ve enough range).

Dynamic mode, however, is for the empty supermarket car park when you’ve got back in one piece. It’s not a hooligan on the surface, but loosen the stability control and it’ll allow some quite outrageous angles of oversteer with only mild provocation.

Not for buyers of electric SUVs. Lord no. But what it stands for is rather exciting. For the first time ever in the company of Audi engineers, I was given a wet circuit with an eager man in a branded gilet encouraging me to loosen the ESP’s shackles and apply throttle as flamboyantly as I could. Footage of e-trons acting as mobile smoke machines played on video walls as I signed into the Neuberg test facility.

I’d not normally break down the fourth wall and describe such nerdy admin details, but it’s clear Audi wants us to know that not only can electric cars be fun, but its own, often strait-laced performance cars can be too. The usually shrewd S badge has a newfound swagger thanks to the freedom offered up by electric power.

“This car drifts on snow, on wet, on dry, on track, in the Alps… You can drive it sensibly on the motorway and it’s a very efficient car with lots of regen or you push the button and you have fun.”

And when you’re being sensible?

Away from the handling loop where childishness was actively encouraged, the e-tron felt neat and tidy for a car weighing over 2.5 tonnes. A smoother, more flowing test circuit showed how natural and grown-up this powertrain feels in smoother use and how well it averts understeer thanks to the torque-vectoring magic going on underneath.

It’s only when stamping hard on the brakes, eschewing much of the speed its almighty torque figure so effortlessly builds, that you’ll realise how clangingly heavy this vehicle is. In corners, the engineers have thrown a cloak over the issue and hidden it with remarkable success.

What else does the S badge bring?

Stiffer suspension over standard e-trons, as well as a butcher, more assertive appearance with 23mm-wider wheelarches, redesigned bumpers and 20in alloys wearing wider tyres (with 21s and 22s optional).

It’ll be available in both e-tron and e-tron Sportback versions, the latter pictured here. The car you see here is described as “very close to production”, and we’ll see the e-tron S without disguise very soon, at the Geneva motor show in early March, where we’ll also get more spec details and an idea of pricing. And where, for the good of its rear tyre life, it’ll be sat dead still.