£ 61,580 when new
Paul Horrell
Published: 05 May 2012
comments
Skip 1 photos in the image carousel and continue reading 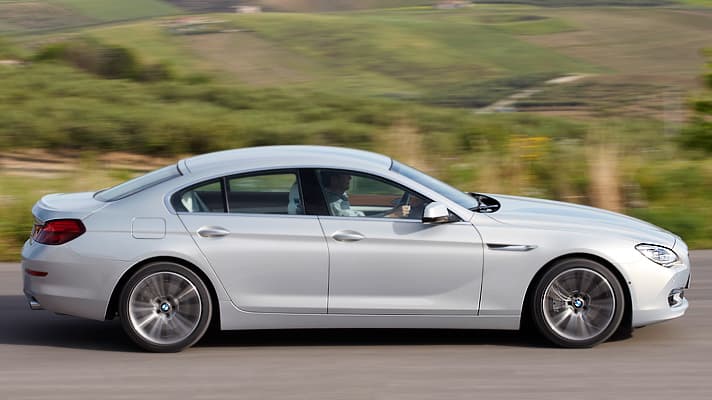 This isn't quite a competitor to the Mercedes CLS. Just as well really, given how late it is to that particular party. Instead it's bigger and more expensive - into Panamera territory. This makes it subtly grander than the Benz. (Well it would be subtle if this particular one wasn't trimmed in the optional dazzling white and queasy brown. Other decors are available.)

This sheer size makes it cumbersome for threading down narrow streets. But in compensation, it's an immensely fine thing to behold. The proportions are flat, broad and low. And BMW's designers have made the most of it by folding the surfaces beautifully and adding tasteful, lush detail.

The front and rear ends, as well as the dash and front seats, are from the 6-series coupe, but the wheelbase is longer to make room for the extra doors and a proper back seat.

Like a shark, the Gran Coupe looks like it's made to swim fast and far. And that's how it feels too. It'll snake its way down a back-road with effortless authority, and then swallow immense motorway stretches without the slightest burp.

All the while you'll be sitting in an environment that's more lush than the typical BMW, and lower to the road. And while the people in the back seats won't be stretching out like they can in a 7-series, neither will they be contorted in bitterness.

Engine wise, you can have the 640i or 640d, both with turbo straight-sixes. The petrol makes 320bhp, has no apparent turbo lag and sings like a bird. But the diesel, at a similar 313bhp, is still well worth listening to, and drinks less fuel while it's at it. Both make great use of an eight-speed auto 'box.

This might be a big saloon, but careful use of materials keeps the weight in check. It has aluminium bonnet and doors, plastics for the front wings and bootlid, and lots of aluminium in the suspension structure. That all helps keep the performance suitably majestic. Both engines get to 60mph in about five seconds.

I drove cars with the optional active steering. It takes away too much steering feel. All of it in fact. So you won't get quite the sense of connection a Porsche Panamera gives you. But the agility and precision are there for the taking. Best of all is the way the suspension - on adaptive dampers and Dynamic Drive active anti-roll bars - keeps itself under control on typical bumpy surfaces. It corners and rides with a nonchalant fluency.

Last year I couldn't quite make sense of the regular two-door 640 coupe. It's not a sports car, yet it felt too big and cumbersome for a 2+2. But this Gran Coupe spin-off looks better and is just as good to drive. It feels special inside, and it shares that special feeling between four grown-ups instead of two. A grand and generous car.