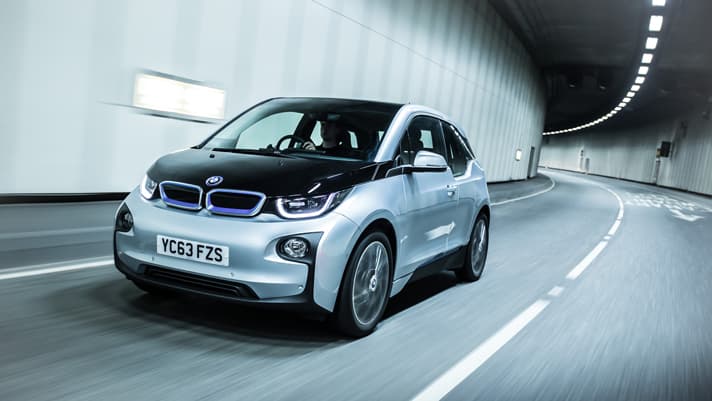 One day, the idea of cars driven by electric motors will become routine. After all, diesels were once a novelty, and so were turbos. We've just had a drive in a BMW i3 - visually disguised, but the real thing in the way it behaves - and it feels so incredibly natural that you rapidly fall for the idea that electric drive should be an idea that nobody questions.After all, if you were on the ground floor and wanted to get to the 21st, would you want a lift powered by petrol? One that changed up a gear as it passed the 14th floor, and changed down again on the 19th? Nope, for smooth and silent movement, electricity is the way to go.

The i3 proves that for a car that ducks and dives around a city or cruises at dual-carriageway speeds, electricity can feel like a beautifully appropriate power source.

Of course, the lift is attached to the mains by a cable. A car doesn't have that luxury (unless it can replace the mains by an onboard generator such as a range-extending engine or a fuel cell). So range for a battery car is a huge issue. The BMW has some mighty clever tricks to extend its range. Most of them revolve around lightness and reduced resistance to the air, and so you feel them the moment you drive.

Getting going is blissfully simple. A little horizontal drum sprouts from the steering column, with biggish rocker switch marked D-N-R, plus a button (start-stop) and another button (park). Funnily enough the engineers call that rocker switch the 'gearlever', even though it's not a lever and it does nothing to do with gears. All it does is switch the motor to run forwards or backwards. The transmission is a fixed single-speed reduction gear between the motor and the diff.

Assuming you want to depart forwards, you just press the start button, switch to D, and apply some accelerator. With utter smoothness, you roll away. There's a distant synthesiser hum of the loudspeaker that warns pedestrians and cyclists of your motion, but barely any of the mechanical whines or electrical buzzes that most EVs can't help emitting. Even in its first few metres, you're struck how BMW had made the i3 sound refined and premium.

It's ruddy sprightly too. That's the lightweight part coming home to roost. With a high-torque 170bhp motor and a power flow uninterrupted by gearchanges, it's at 62mph in 7.2 seconds. The addictive thing is the instant and proportional answer you get whenever you twitch your right foot. The same applies when you lift off, too. There's strong regenerative braking from the motor even before you touch the brake.

Actually the motor braking, and the ability it gives you to drive with one pedal, is slightly less powerful than it was in the Mini E that BMW used to prove out the motor and batteries. That's because the i3 is RWD, and if they gave it such powerful regenerative braking on the rear wheels it could actually get unstable on a slippery road.

Top speed is limited to 93mph because energy use rises sharply after that. Besides, rating it for more speed would probably need heavier brakes and cooling, which would dent efficiency at normal speed.

It looks tall and the ride is supple, yet it rolls and pitches amazingly little, because so much of the weight is low to the road. The steering is pretty quick, so it's possible to wind in some sudden changes of direction, and the car accepts them without getting upset. The front end feels light and biddable. Of course the thin tyres don't hold on for ever, and it's set up to understeer if you go in too fast.

Sure it's rear-drive, but it's not about oversteer. Rather, the benefits of RWD are the pure steering and the excellent traction. And also an astoundingly tight turning circle, another feather in the cap of a car that'll be driven a lot in cities.

Speaking of which, the high driving position and great visibility are also feelgood assets for threading yourself among tight traffic. And for parking, you'll be glad it's supermini-short. But there's decent room for four people inside.

And what a lovely cabin. BMW has used the i project to invent a whole new design language, of spare, ornament-free surfaces and reduced bulk in the dash and seats. It feels extremely modern and calm, but high quality.

They wouldn't let us show it to you today, though. But the i3 Concept Coupe is basically a two-door version of the production car, and has the production interior pretty much unaltered.

Before you criticise the cars in the picture as looking like a telephone box, be aware of the effect of the disguise. It covers up the nicely jewelled lights, and the clever aero detailing in the rear of the body. It also masks the kink in the beltline behind the front doors, which gives a strong individuality and sense of movement to the profile.

The real thing will be unveiled later this month, by the way, so it's not long to wait. The design is aimed at making it look light and aerodynamic because that's what it is. By inventing new ways of making and moulding carbonfibre relatively cheaply, BMW has been able to use a carbonfibre structural bodyshell sitting on a punt-shaped extruded aluminium chassis. That's a great basis for cutting the kilos. This means the battery can be smaller for a given range, which itself cuts more weight. And a lighter battery and body means they can use lighter suspension and wheels and brakes.

If that's not enough, they have a £2000 get-out-of-jail option, a tiny range extender module. This packs a two-cylinder 650cc petrol and generator in a vacant space next to the motor under the boot floor, and a 9-litre fuel tank in the nose. That's another 100 miles of range right there, and you can replenish that at a petrol station in two minutes. Because the range extender develops less power than the drive motor, you can't go flat out everywhere, but it'll be reassuring to have.

At first sampling then, this is a compelling electric car. It's not the first on the market, but BMW has put some original thinking into almost every part of its design and engineering. It drives sweetly, is distinctively designed, and has the reassuring range-extender option if you are anxious about running flat.

That said, BMW reckons nearly all i3 buyers will use it as a second car so won't be doing long journeys, and it's optimised to make them efficient and fun.