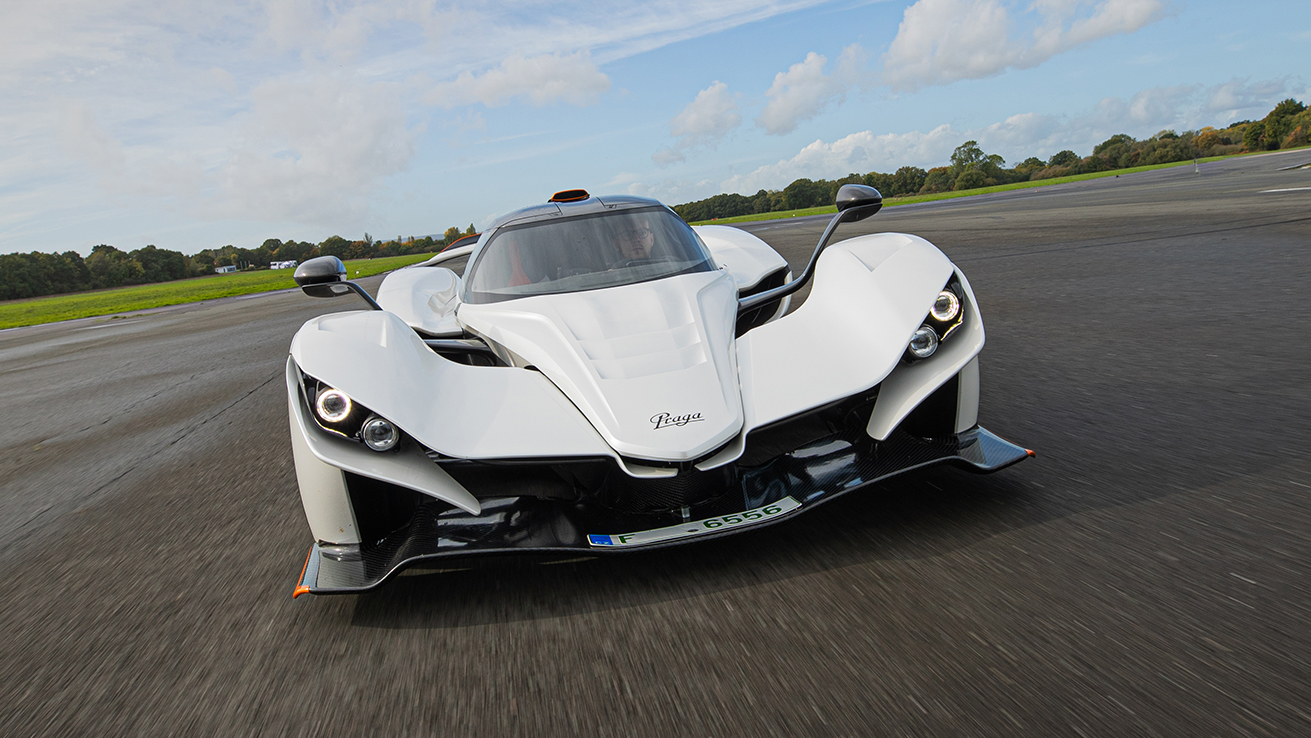 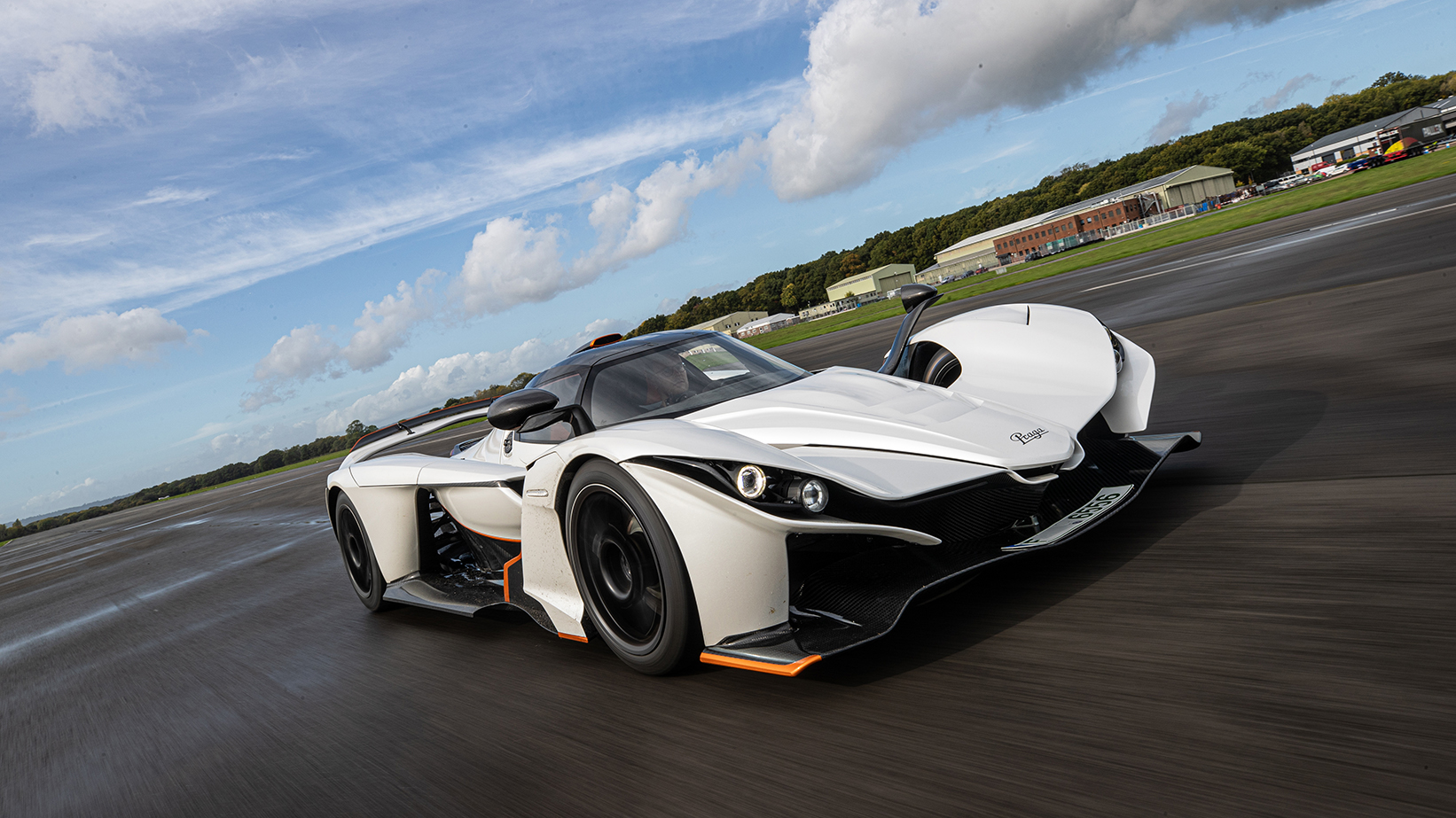 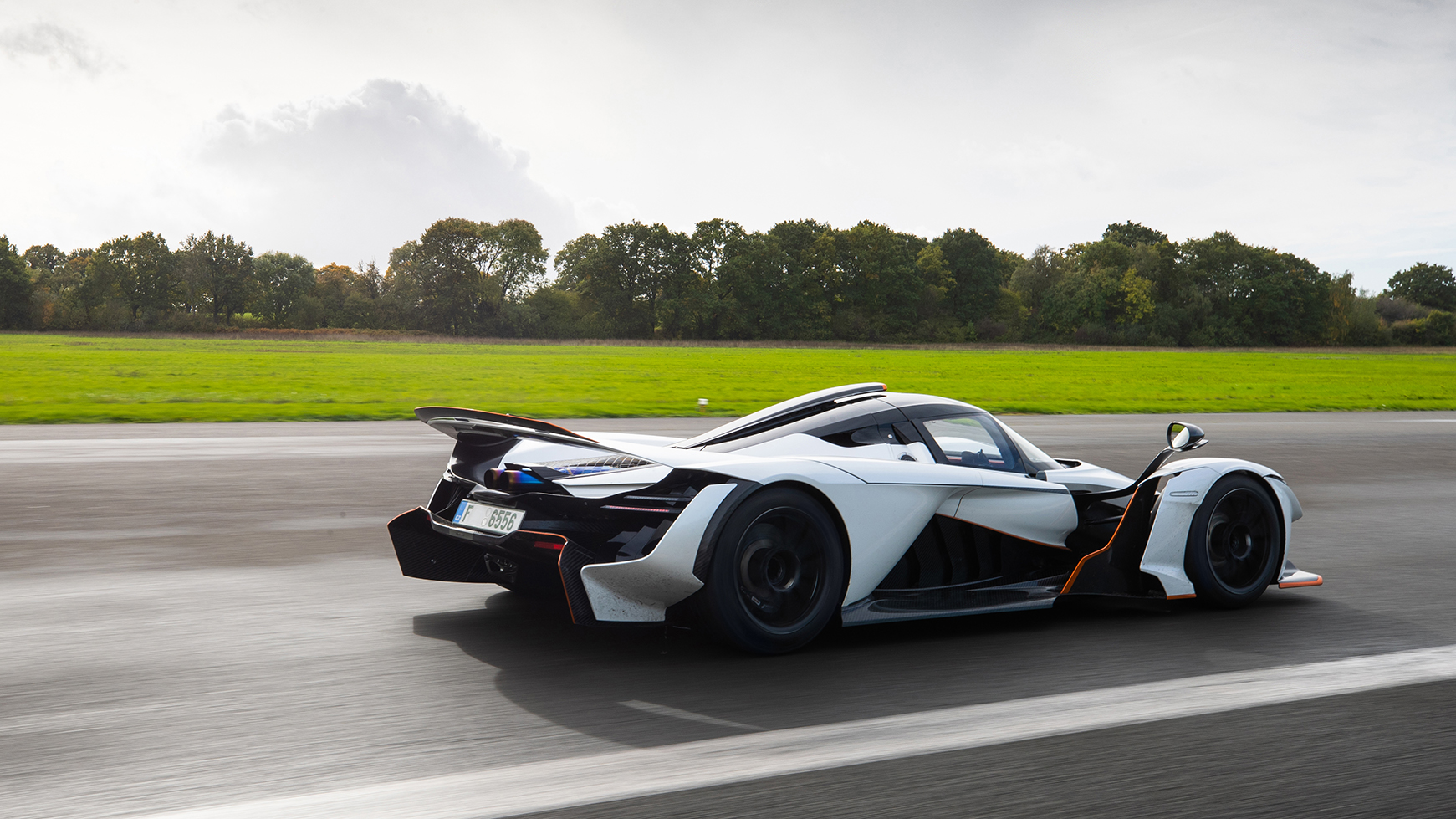 Its maker, Praga, invited Top Gear to come down to a secret location nearby to the Top Gear test track and have a ruddy good poke around the new Bohema supercar.

Since there was a world-famous racetrack-cum-airfield just outside, Praga decided to be a good sport and also let us have a few exploratory laps in its hard-worked prototype.

So that’s a rather valuable new supercar in not-quite-finished condition, and a puddle-strewn airstrip in late October. Excellent. Good job they’ve turned down the power a bit.

Nope, while Praga finesses the finer details of the Bohema, this prototype’s 3.8-litre Nissan GT-R bi-turbo V6 has been wound back to five-hundred-and-something. That’s still plenty in a car that weighs about a tonne. For the full tech-spec of the Bohema’s construction and powertrain, tap on these blue words.

Back? Splendid. Safe to say we’re not attempting to verify the 900kg of downforce claim here, or set a new Top Gear test track lap record, which you sense the Bohema might be eminently capable of once it’s finished. This is just an early meet-and-greet with a new name in the supercar fraternity. And a lesson in how to actually climb aboard.

Does it actually have doors?

‘Doors’ is a grandiose term. This is more like opening a pedal-bin and falling inside.

The trick is to sit down on the top of the air intakes, swing both feet together over the sill and into the footwell, then do a chest-dip down into the seat until your feet find the pedals. Mine are size twelves and fit just fine. The seat in this example is too wide for me, but Praga will offer the 89 customers paying £1.1m for a Bohema bespoke padding inserts so they’re held tightly in the semi-fixed seat.

The backrest adjusts a little for rake, but otherwise it’s a case of moving the steering wheel and pedals to suit you. It immediately feels purposeful, and the view out is fab, with the wraparound windscreen fitting the driver like a visor and the tops of the wheelhouses prominent in your field of vision, helping place the car on an apex. Or outside the post office. This is a road car, remember…

Does it feel anything like a road car, though?

At first, no. The engine catches with a much rawer, more intimidating growl than in a Nissan GT-R, that’s for sure. Because you can hear more chuntering and whirring, it somehow sounds more expensive than a GT-R does. Which is just as well, given this costs ten times as much.

It’s not like being chased along by a tunnel-boring machine though. Praga says from experience with its racing cars, it elected not to make the engine block a stressed member of the chassis, and instead mounted it in a rubber-bushed cradle. There’s a weight penalty for that, of course, but it means that when the Bohema is idling in traffic, it won’t vibrate the owner’s designer shades clean off their face. 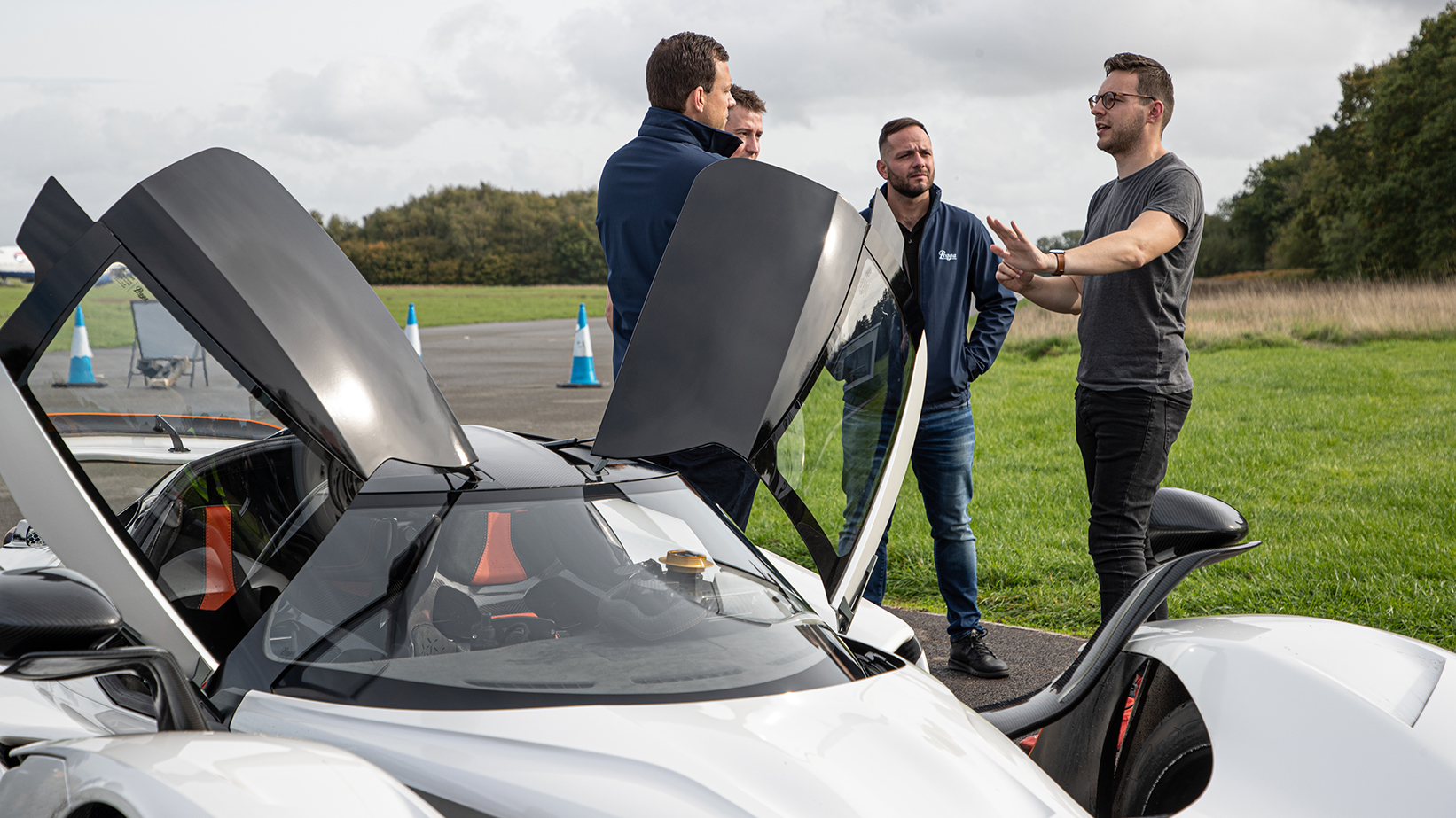 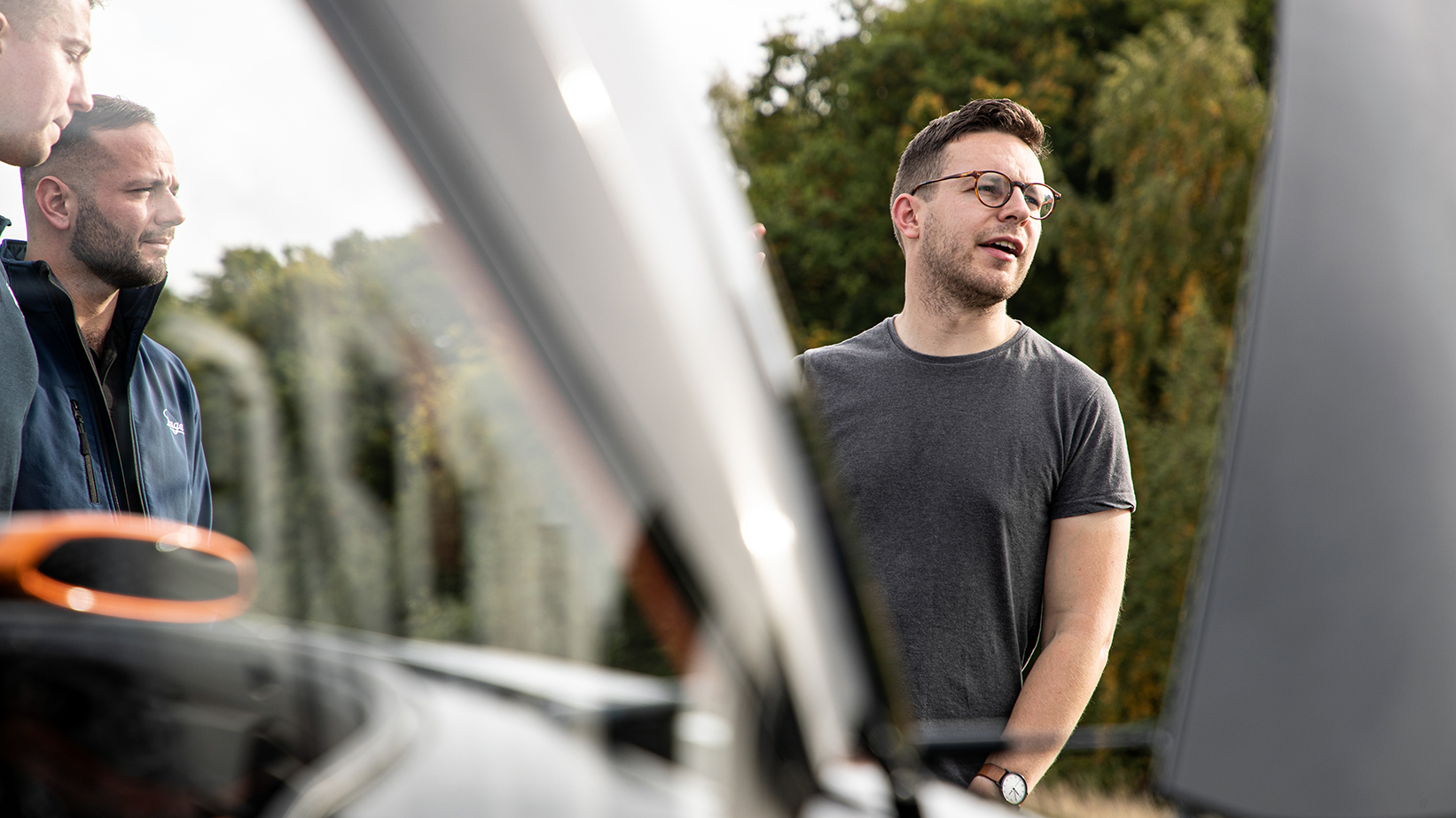 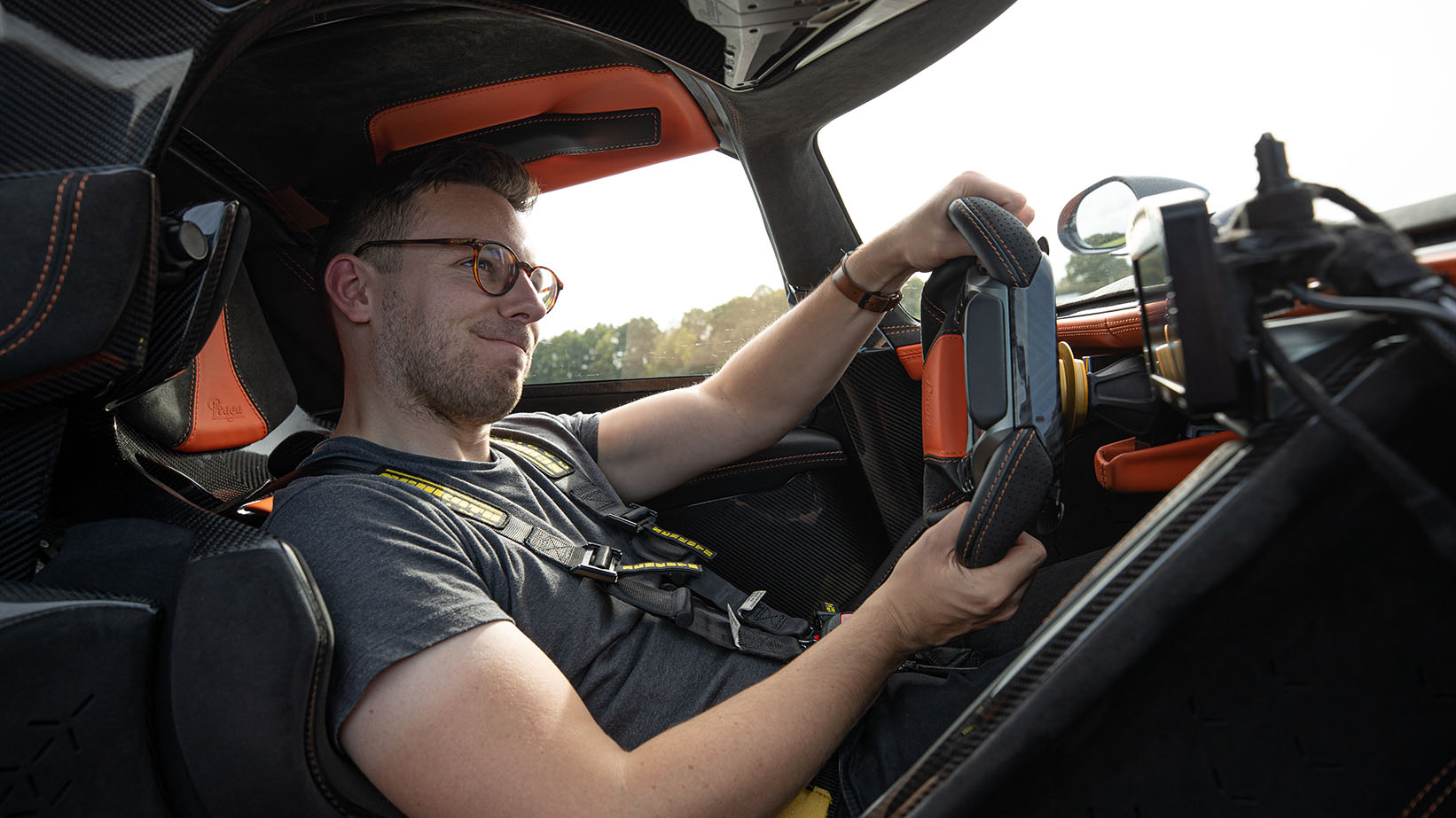 It’s also strangely comfortable. At first we’re off for a pootle around Dunsfold’s runway perimeter road, which NASA rejected as a place to test moon buggies as it’s too bumpy and rugged. There’s compliance and plenty of suspension travel – and no tell-tale graunches. The boinging mirrors give away just how craggy this surface is – Praga says stiffening the lengthy carbon mirror supports to stop them wobbling is on the snagging list.

Steering is power-assisted, but feels pretty alien because of the bizarre-shaped steering wheel yolk – it rests beautifully in the hands but it’s odd to flail with on full lock. The bit that feels most ‘racecar’ is the six speed Hewland paddleshift gearbox. On small throttle openings it’s a bit lazy and shunts shifts through like it’d rather be left asleep. Again Praga says it knows, and the finished ones will be smoother.

It’s still hardly likely to be as slick as a DCT though, and we all know that hypercar owners are arguably more interested in how the car schleps along at 2mph than how stable it is braking from 220mph…

Even with a watered-down engine tune, the Bohema is eye-wateringly fast. The gearbox is happier when asked to swap cogs at high revs, if not seamless, and though there’s naturally some turbo lag you don’t have much to worry about when the boost arrives because traction is plentiful. In fact, it all feels incredibly friendly for such a fragile-looking upstart.

Through the scary kink of the Followthrough, the Bohema has rock-solid stability – downforce is always tricky to quantify but there must be aero witchcraft at work here for a sub-1000kg on semi-slicks to feel so friendly through here.

In fact it’s all so confidence inspiring, I get a bit cocky with the throttle coming out of Chicago on my last lap, smash the gas open instead of squeezing it progressively, and with a chirrup from the tyres, I’m facing the way I came. And stalled. So yes, the traction control isn’t quite idiot-proof yet. And yes, Praga says it’s on their to-do list.

The most impressive bit about the drive, as you might expect, is the braking performance. Millionaire car collectors who are a little sensitive about their lacking in the height department would do well to bag themselves a Praga. Ten laps in this and your neck will be a foot longer, as it stretches to keep your head attached when you smash the pedal. With so little mass to fight and an invisible helping hand of downforce, the Bohema stops violently, and yet there’s so much precision.

So it’s got potential then?

I highly doubt Praga will have issues shifting 89 of these. The bulletproof tonality of the engine promises much for power fetishists, the on-track handling is hypercar-exciting but stays the right side of never-again terrifying, and there’s much talk of build quality and attention to detail from the engineers that bodes well. This isn’t a vapourware rendering that promises to drive on the ceiling and lap the Ring in the time it takes to sing a Taylor Swift song.

The Bohema has credible goals, and it’s backed by humble people. Whether or not it’ll be tolerable as a road car remains to be seen, but view it as a track car that doesn’t need a trailer, rather than a Cars’n’Coffee chariot, and there’s surely space for Czechia’s answer to the McLaren Solus and Red Bull RB17 in this rarefied stratosphere of the car market. Roll on the finished product…