Read why you can trust our independent reviews
Greg Potts
Published: 27 Jul 2021
comments
Skip 9 photos in the image carousel and continue reading 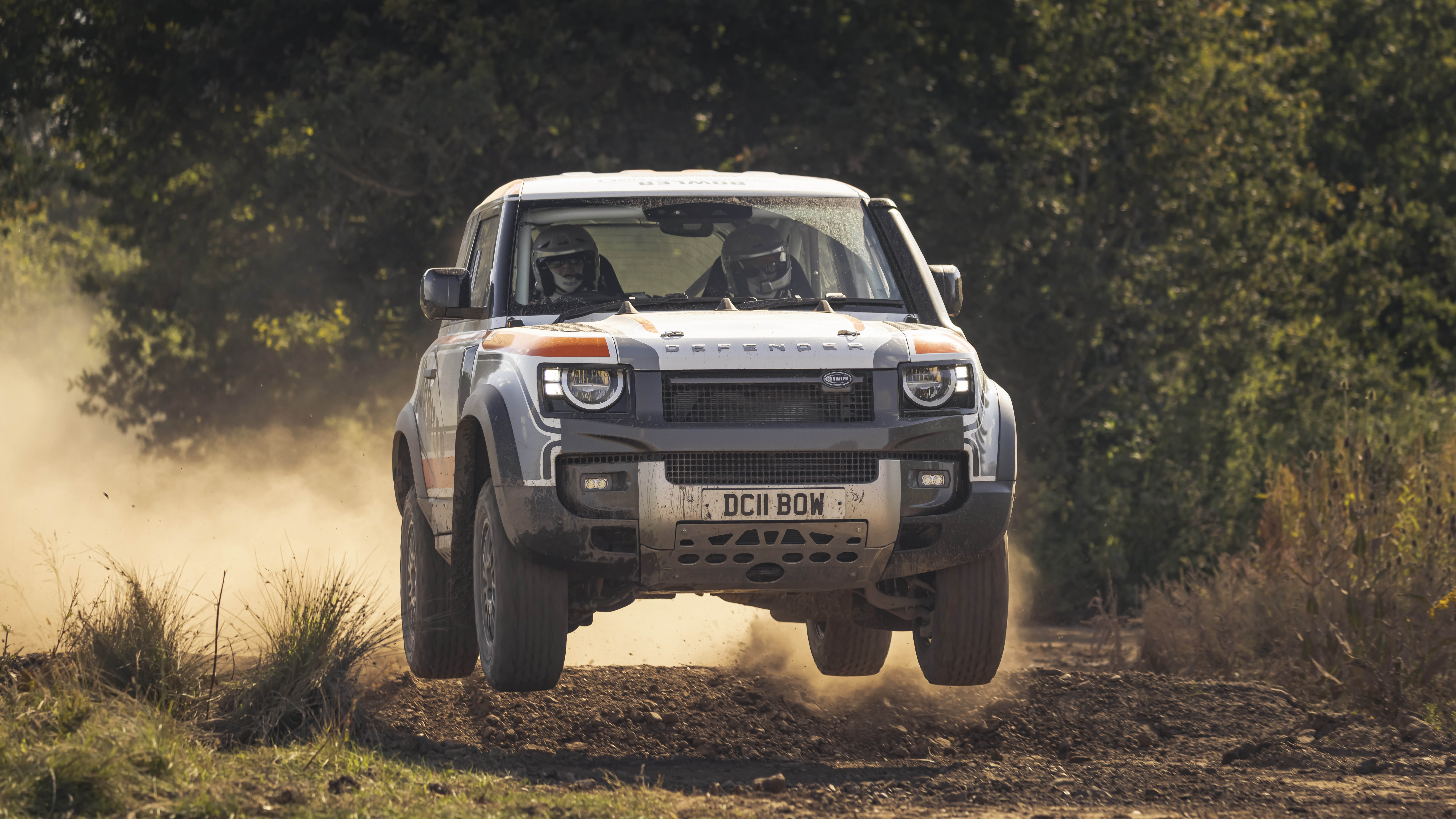 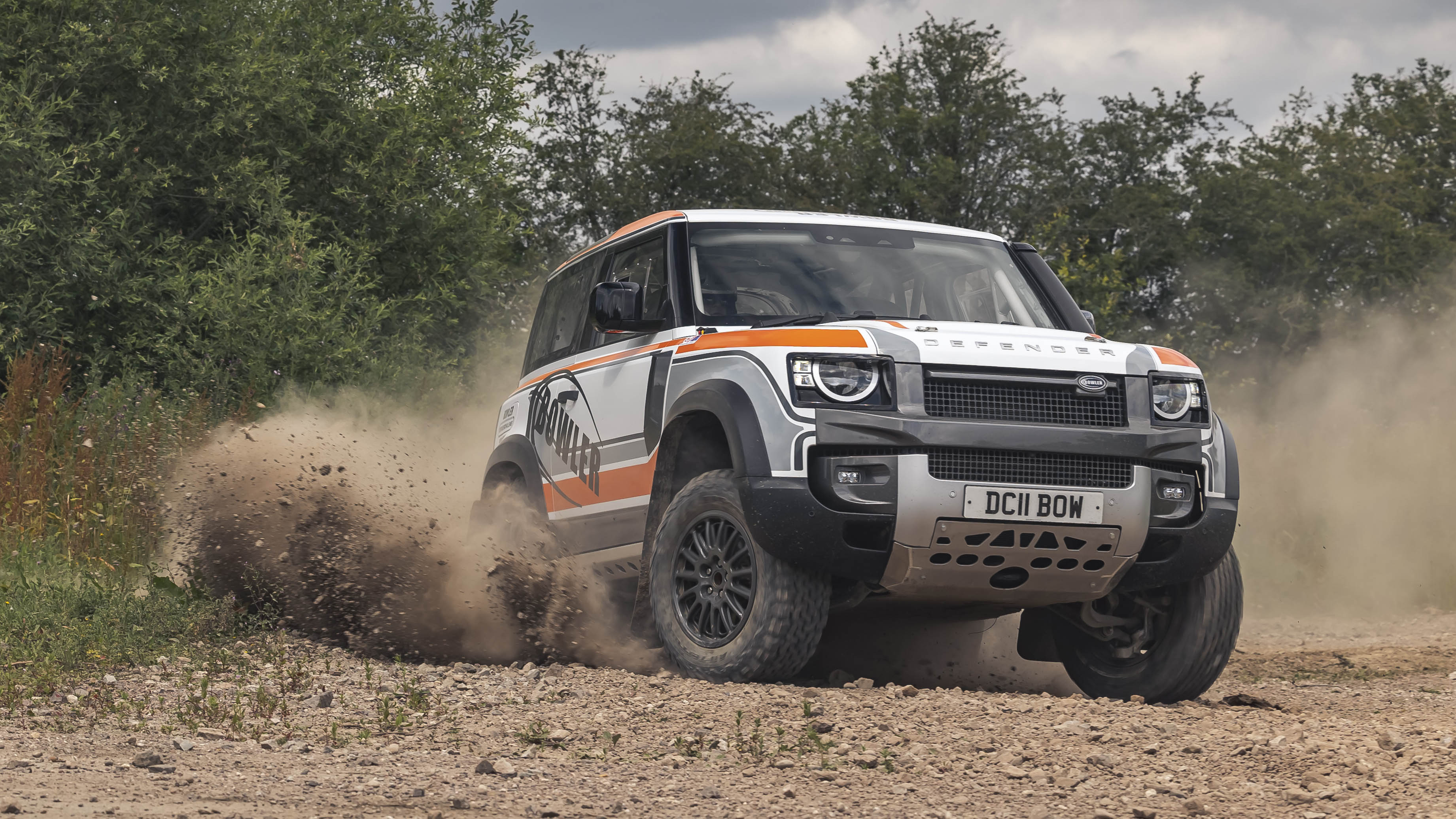 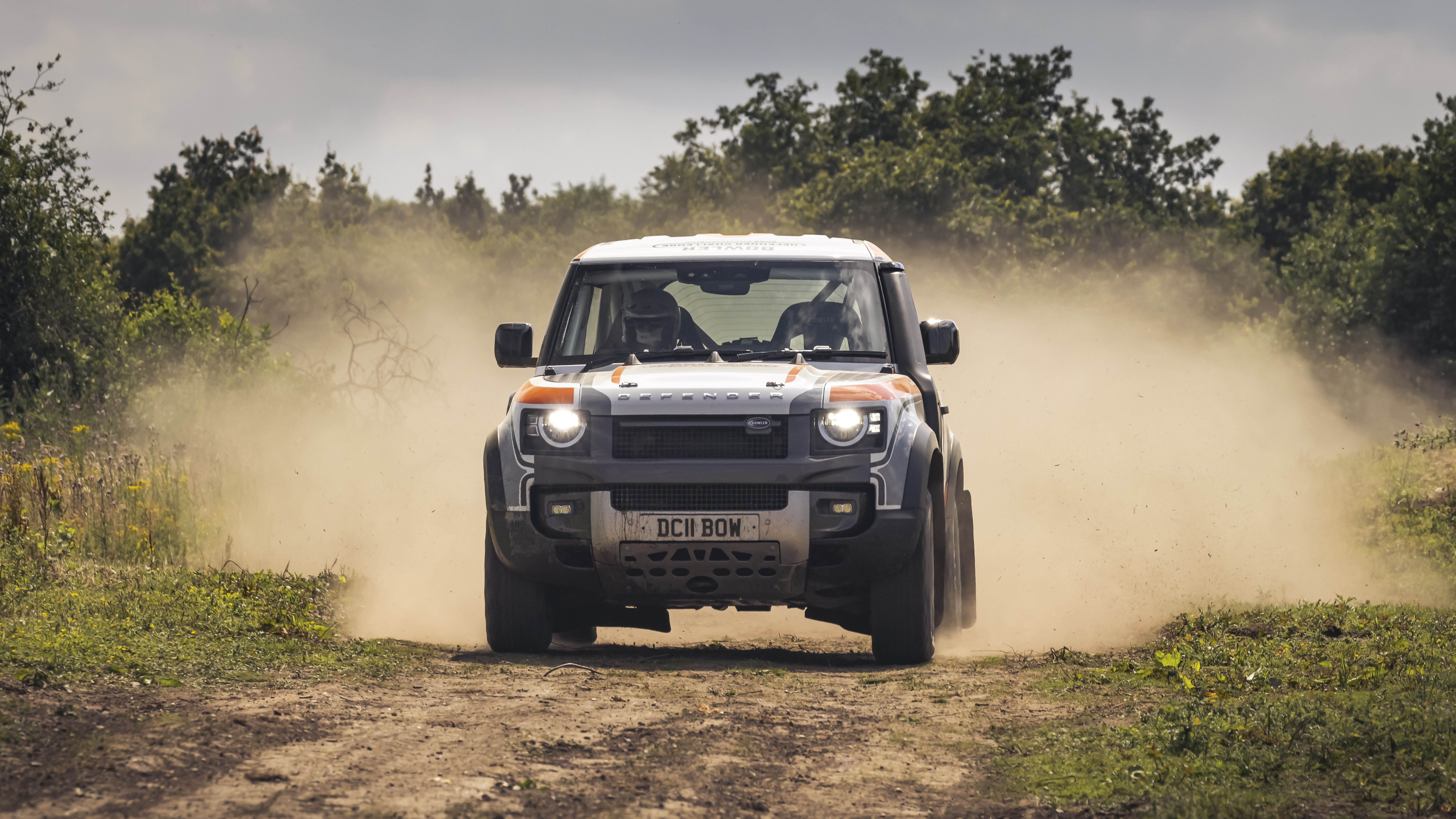 What is that magnificent airborne thing I see above?

Click these blue words for a little more info. Essentially, the Challenge first ran between 2014 and 2016, when competitors drove old Defenders with diesel engines, manual gearboxes and a tendency to rollover like submissive dogs. When it comes back in 2022, there’ll be 12 of these new 90s competing across seven UK-based rounds.

Rally car you say? How have they turned the Defender into a rally car?

Well, despite Bowler stopping itself from making major changes in order to keep costs down, this could still take a while…

First thing to note, though, is that because the Challenge series is designed for anyone from veteran competitors to complete novices, the car isn’t based on the fire-spitting 518bhp Defender V8.

No, its beginnings are far more humble. Bowler starts with the bottom-of-the-rung Defender 90 P300, which means coil-sprung suspension and a turbocharged 2.0-litre four-cylinder engine that makes 296bhp in the road car but breathes a bit freer here thanks to a new exhaust. Think somewhere around the 300bhp mark. Bowler reckons that’s just enough, and we’d be inclined to agree.

Almost all of the standard body panels remain, although the doors are chopped to fit the bombproof (not literally, although at times it feels like it) 6mm-thick aluminium underbody protection and the front bumper is slightly redesigned for a more aggressive look and extra cooling, plus additional frickin' laser lights.

The wheels are exceptionally strong 18-inch Borbet units that can take a 1.25-tonne load. Each. They’re also clad in chunky tyres. Oh, and on the weight front – it’s almost exactly the same as the road car (2,261kg) despite a full FIA-approved roll cage being threaded around the new Defender’s aluminium monocoque chassis – no mean feat that. Much of the saving is thanks to the removal of two radiators up front, with Bowler finding just one is up to the job.

There’s a distinct lack of a spare wheel on that rear door too – it’s now housed inside the stripped out interior for better weight distribution.

Ah yes, what’s going on inside?

Well, JLR’s magnesium cross beam has been chopped out – there’s simply no need for it with the roll cage – along with almost every creature comfort. The 10-inch Pivi Pro-equipped central screen remains, but you probably won’t get a chance to jab away at it mid-rally.

You’ll be pleased to know there’s still air con though, and the OMP Racing steering wheel is paired with a single column-mounted paddle shifter for the road car’s standard eight-speed gearbox. We can’t comment on the paddle’s effectiveness unfortunately, because in the prototype we drove it was sticking and needed some high-tech electrical tape for a quick-fix. Bowler reckons this setup will be great for newbies, though, as they can progress from leaving the gearbox in auto/sport mode and focusing on other things, to using the new shifter to gain time in technical sections. Clever.

There are more changes underneath, aren’t there?

Not too many, don’t worry. There are jokes about a new ‘Bowler Mode’ for the terrain response system, but a whole heap of electronic nannies have had to be switched off including the traction control and stability control.

The steering ratio is the same as standard and the brakes are the smallest Land Rover offers on the road car in order to fit under the new wheels. The Challenge does ride 25mm higher than a normal 90, though, and there are new spring rates and fancy Fox Racing dampers. 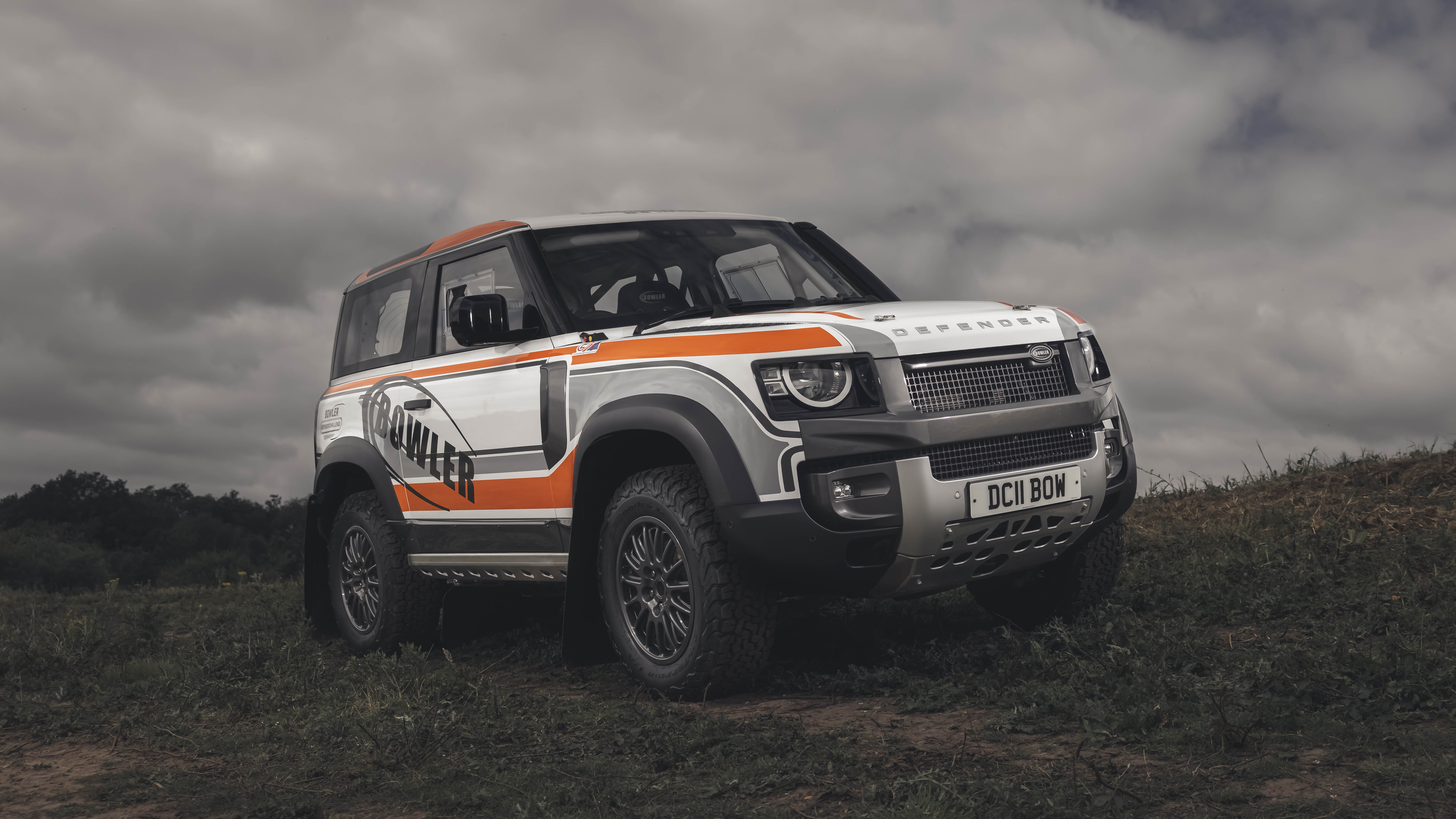 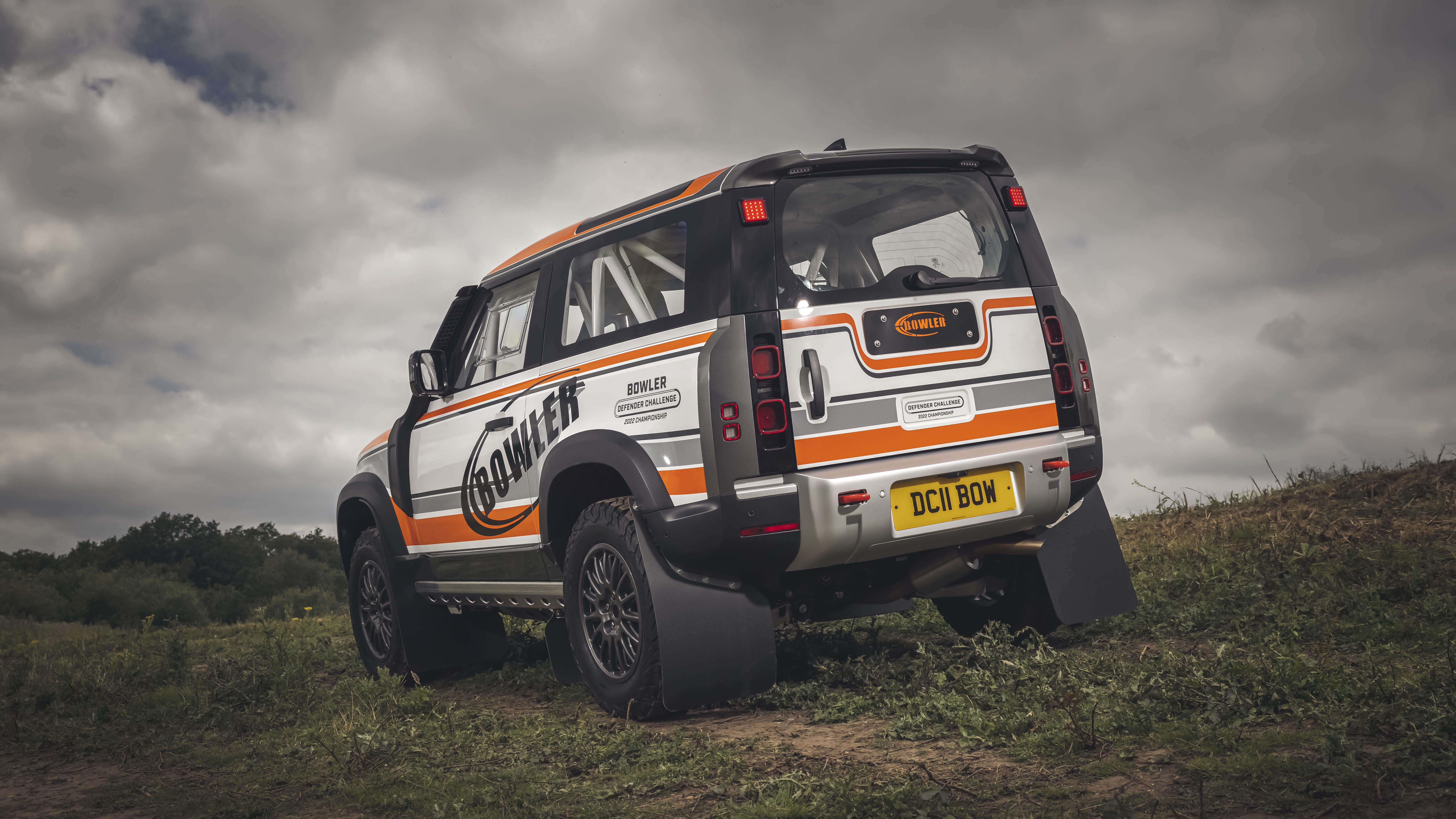 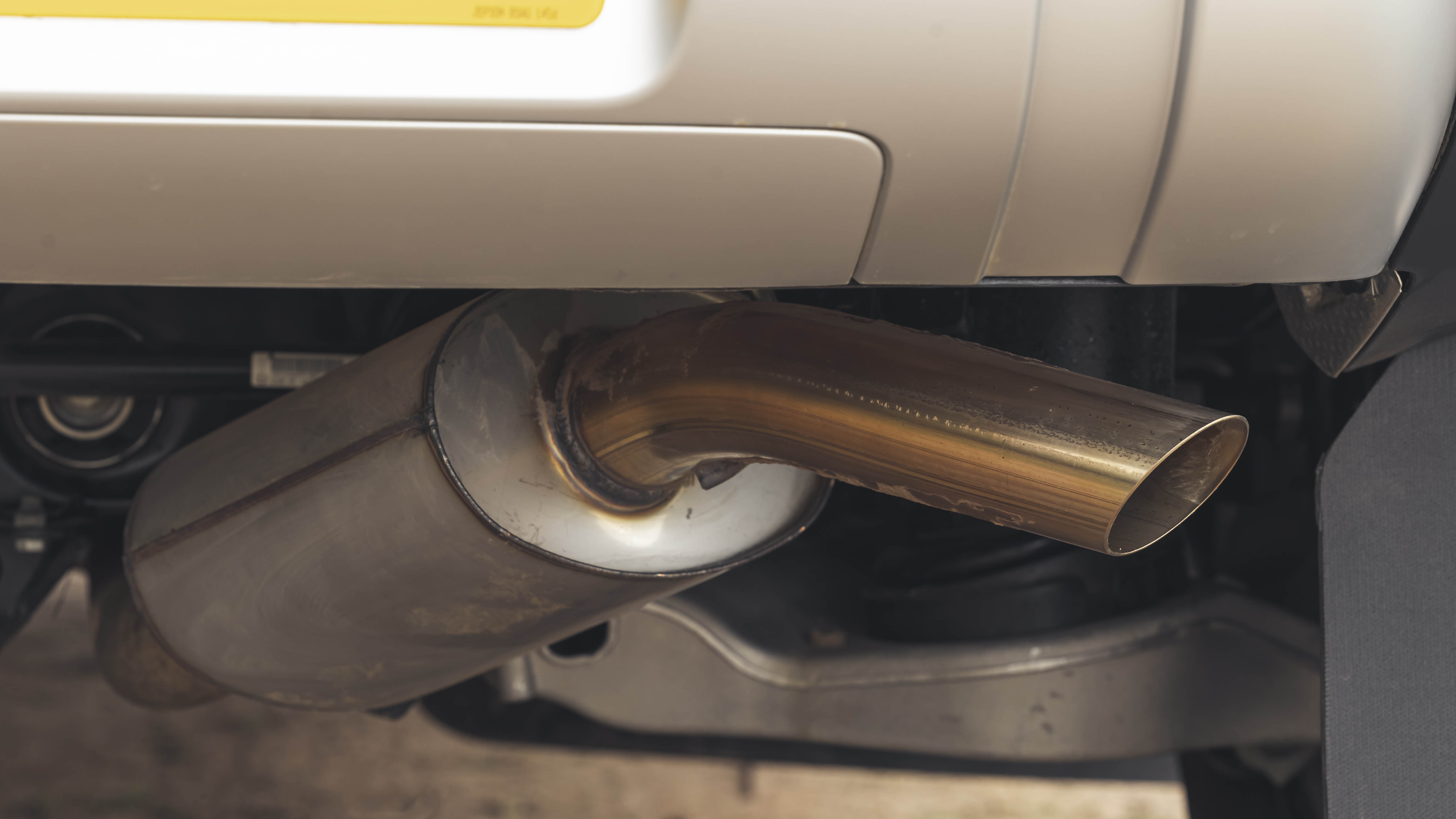 Is it a good thing that Bowler is now owned by JLR?

It certainly seems so. Bowler says that having access to the SVO division (its people and its parts bin) probably saved six to nine months of development time for the Challenge car. It also meant it could use the fantastic-looking snorkel, and that those shark fin-like industrial windscreen washers are apparently from a Discovery 5.

Thought you’d never ask. I’ve finally had my driving deity experience. Or more accurately, the Defender Challenge has handed it to me on a plate, because whilst it may look intimidating, it’s actually a giant softie.

With standard engine/gearbox/steering calibrations it doesn’t feel twitchy or tough to drive smoothly. It’s impressively quick over literally any terrain though, and grips remarkably well in high-speed tarmac turns whilst somehow limiting body roll. Stops with some force too, and turns in sharply with the lighter petrol engine up front.

This is as analogue as the new Defender will get, and it’s brilliant. Plus, where the old Bowler Defender Challenge might fall over or get thrown off by a mid-corner bump, this new one takes it all in its stride.

How did it land after that jump, then?

Almost impossibly calmly. Somehow it’ll land softly but still manage to reduce rebound on the way back up and settle itself for the next corner. That’s down to the adjustable damping, which Bowler says still has a bit of tuning to be completely perfect. That’s attention to detail for you.

Worth mentioning that the new exhaust setup also helps with ground clearance whilst making things sound a little more exciting at the same time.

How do I get one?

Well, it’ll cost you £99,500, but that gets you the car, the rally conversion and entry into the seven-round championship with Bowler support at each race.

Just 12 spots and 12 cars are up for grabs in the 2022 Challenge, and you’ll get to keep your car after the series finishes. All are painted white this year, but buyers will be able to customise their graphics and add sponsors to the liveries you see above.