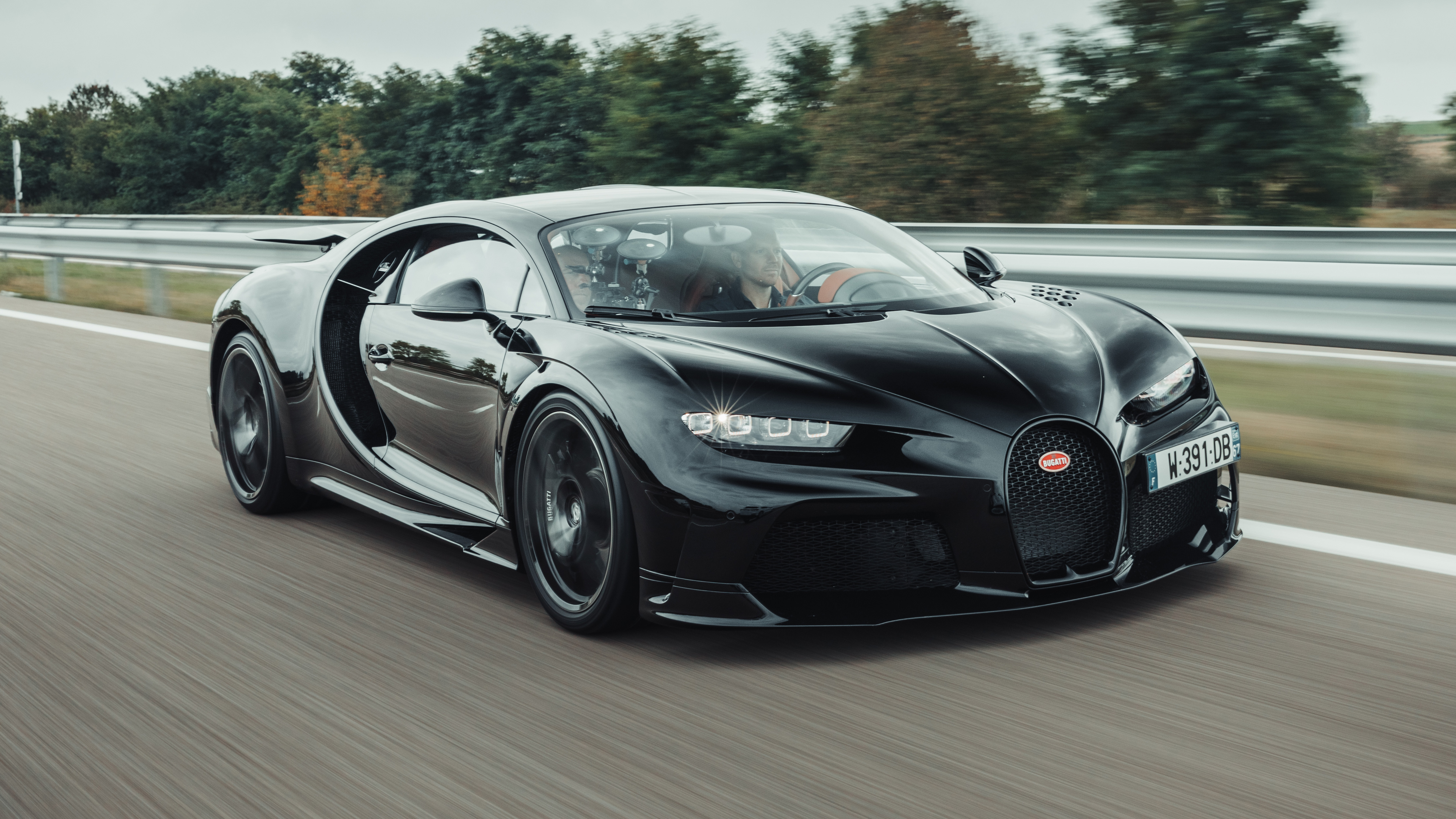 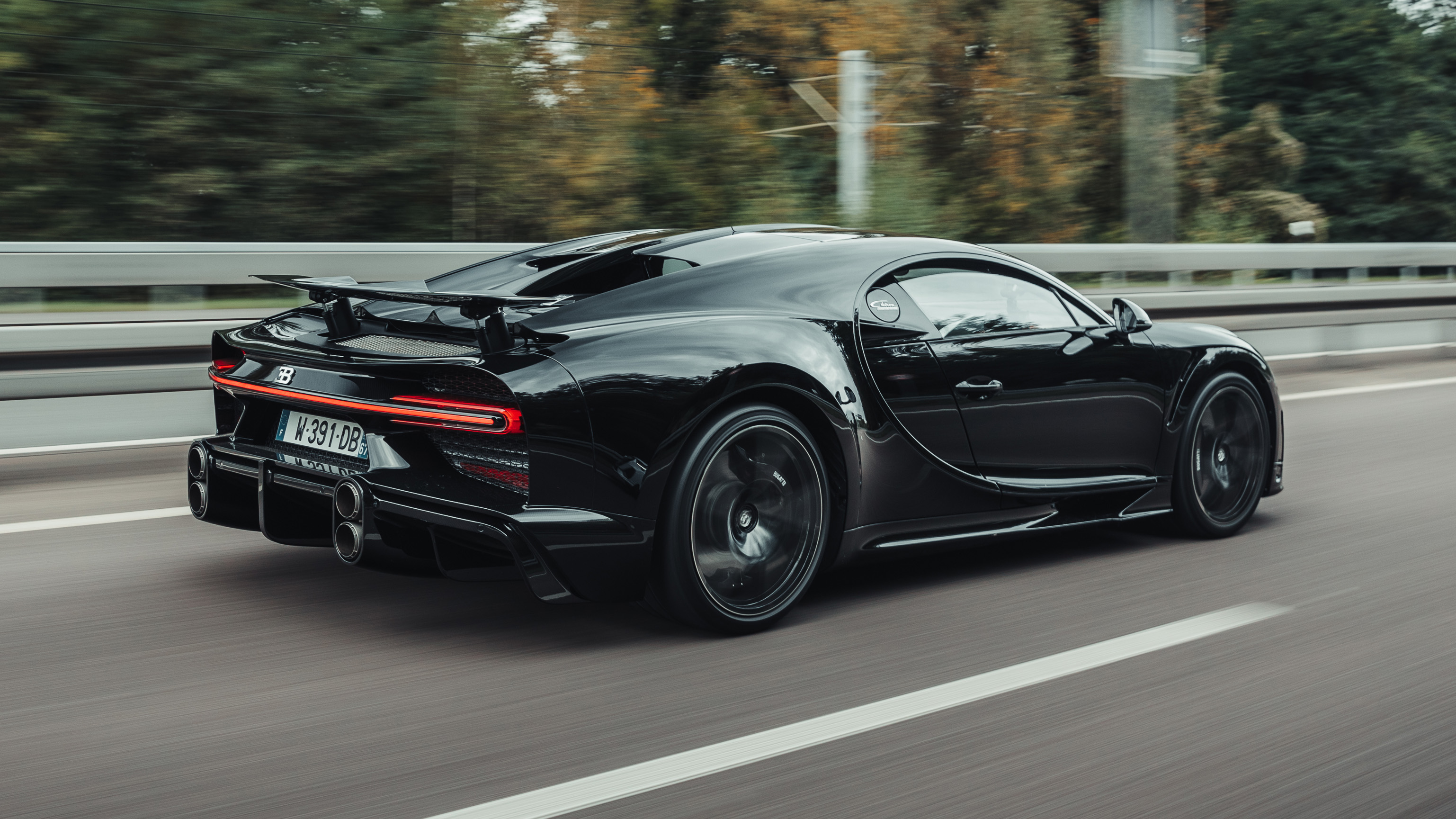 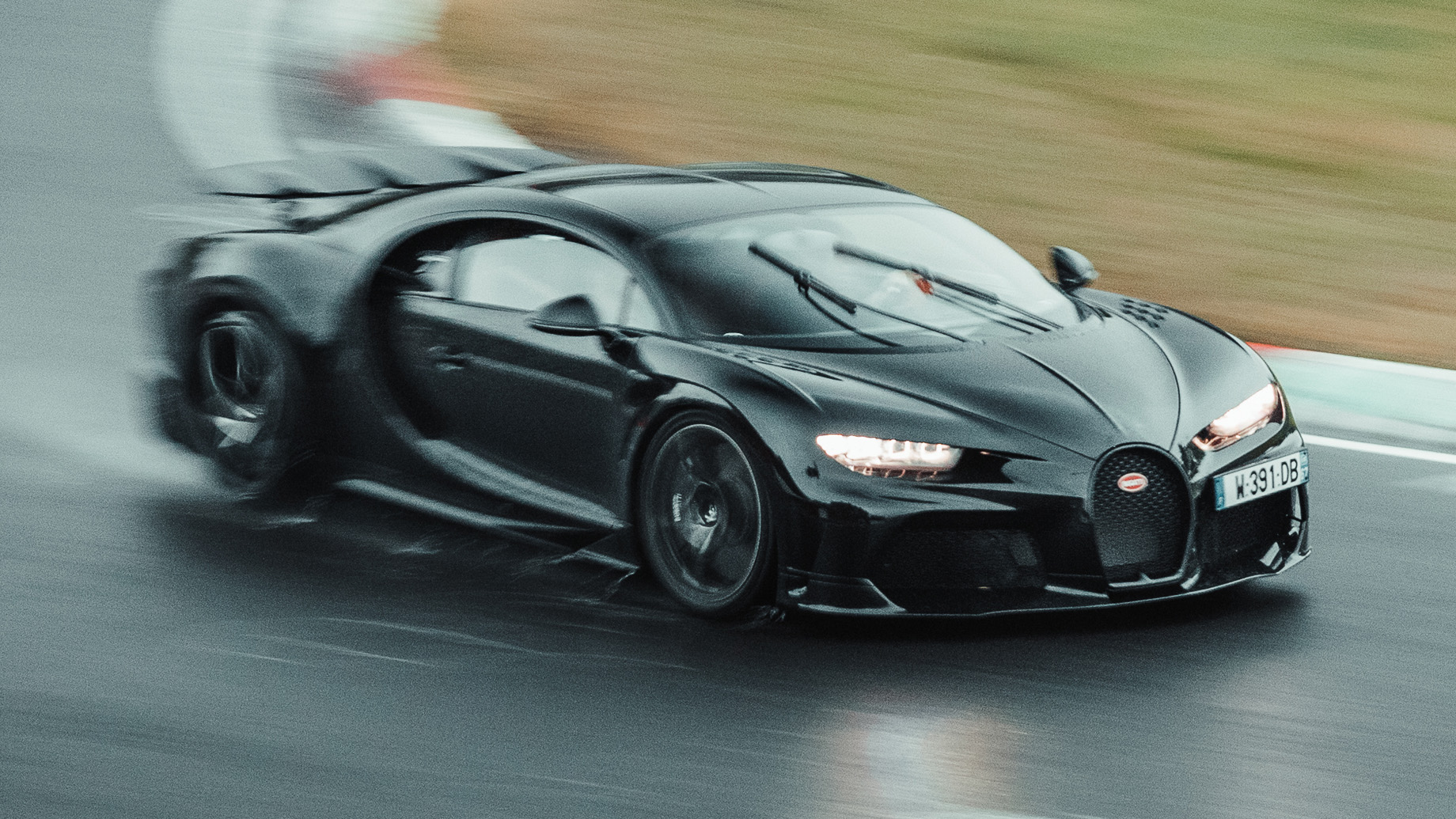 This is the elongated and pumped-up Bugatti Chiron that Andy Wallace drove at 304.773mph in 2019 – the first series production car to break the 300mph barrier. Well… a close approximation of it at least. Off the back of that speedy day out at Ehra-Lessien, Bugatti announced it would build 30 Chiron Super Sport 300+ special editions, visually and mechanically based on the record-breaking car (albeit limited to 273mph for tyre and life preservation purposes), with the same 8.0-litre quad turbo W16 engine boosted by 100 to 1,578bhp, all 30 in the same black-with-orange-stripes livery and costing £3m each. On top of that there’s the mechanically-identical ‘standard’ Super Sport model, as driven here – available from £2.6m in any colour you like… so long as you don’t copy the 300+ edition.

So how many Super Sports will be made?

As many as you like. Sort of. Bugatti will only ever build 500 Chirons, but within that will be a mix of Chiron, Chiron Sport, Chiron Pur Sport and Super Sport. The coachbuilt specials – Divo, Centodieci, Voiture Noire – are on top of the 500. In fact, the standard Chiron and Chiron Sport have come to the end of their homologation run, so if you have a spare few million sloshing around, your choice is only between Pur Sport and Super Sport. My heart bleeds.

Tricky decision. What would you go for?

Glad you asked. The best way to think of this is as the Chiron Streamliner - the Chiron Pur Sport and Bugatti Divo lean more towards cornering, lap times and handing ability whereas the Super Sport at its core is about minimising drag and maximising straight line speed. It can still handle itself around a track, maybe not to the same extent, but its bandwidth is definitely wider than the more hardcore models. Given the Chiron was always designed as a monster GT more than a track rat, it would be a Super Sport all day for me.

At the front corners air curtains smooth the air down the side of the car, but also help draw warm air and turbulence out of the front wheel arch. At big speeds the pressure build up in the arch is intense, if it had nowhere to go it would find its way under the car and create lift – hence the vents behind the arch and holes punched in the top of it – a nod to the EB110 Super Sport.

The back is the business end of this car. The bodywork is extended by 250mm to help keep the laminar flow attached for longer and reduce aerodynamic stall by 40 per cent. Translated into TG: to make it as slippery as a bowl of noodles in baby oil. Gone is the horizontal stack of four-exhausts, replaced with two wide-set double stacks leaving space for a much larger central diffuser. That allows the car to stay stuck to the road even with the wing fully retracted in Top Speed mode. Remember, any downforce created under the car is done so without a drag penalty, unlike sticking something into the airflow on the top surface of the car, which plays perfectly into this car’s high-speed aspirations.

And then there’s the tyres – bespoke Michelin Pilot Sport Cup 2s with a special strengthened construction to help them withstand the extreme forces at 250mph and beyond. For example, at 304mph the tyres experience a seven-tonne tearing force: equivalent to taking a tyre from its rim, lashing a chain around it and hanging three and a half Chirons off it.

The interior is as special as ever, dominated by the central horse-shoe-shaped divider next to you and the central analogue speedometer, running to 500kph, in front. But there’s a gorgeous simplicity to the design, a focus on the best possible materials wherever you look and touch so it actually feels worthy of its price. There’s only the information you need on the screens flanking the speedo, and a quartet of dials on the dash for adjusting the air-con… and logging your maximum power consumption from the engine, max speed and max rpm. This car actively goads you on.

What settings do you have at your disposal?

Many. Several miles of straight road to play on? You’ll want the Top Speed mode, activated via the speed key – hands-down the coolest single feature in any car – located by your left thigh. Remove it, insert it then twist it when you're parked up and the car will assess whether you’re up to it – slamming the ride height, retracting underbody fins to bleed downforce from the front and performing a series of other safety checks. Tyres more than two years old? Access denied.

Available without a second key are the four modes on the wheel-mounted dial. An access height mode, which deactivates above 50kph, your all-purpose Bugatti mode, a track mode that loosens the ESC and adds an extra four degrees of wing, and an autobahn mode that gives you 20 extra degrees of nose-down rake to keep things stable when you’re late for your meeting in Munich.

Where did you it drive then?

This was an act in three parts. We collected the car from the factory in Molsheim, picked our way through traffic to the German border, blasted up the autobahn and then drove around the Nürburgring. During a tourist session. Remarkably, Bugatti was OK with this plan.

Easy to use at slow speeds then?

Stupidly easy. And this is what sets Bugatti apart from the rest – the engineering, the attention to detail that goes into making something this powerful and capable at unthinkable speeds trickle along in traffic, the gearbox slurring away in the background, is mind-blowing. Andy Wallace (my co-pilot, Bugatti test driver, man who drove a McLaren F1 at 250mph, a Chiron at 304mph and with whom I’m chatting casually with as I navigate the congested centre of Saarbrucken in a 1,578bhp missile) tells me about a Chiron owner who’s put 50,000-miles on theirs already. I can’t tell you how happy this makes me, because this is a car that begs to be driven regularly, it’s just so outrageously useable.

But you went quickly too, right?

Come on, who do you think I am. Finding a decent stretch of quiet, derestricted Autobahn on a Tuesday lunchtime isn’t easy… but we did. And my word, the way this thing primes the turbos, girds its loins then detonates you down the road is a faintly terrifying but magical experience. For with all this force through your back, comes unshakeable stability and a sense of complete control. I daren’t look down at the speedo in case one of my fellow road users gets twitchy, but I keep it pinned until a gentle curve ahead starts to look like a hairpin. “What did we hit Andy?” I ask, the words catching in my suddenly quite dry throat. “211mph, you used 1615 PS (1593bhp), and hit about 6,950rpm,” replies Andy, looking a bit like a proud dad. The fastest I’ve ever been in a car full stop. And we’re on a public road. Internal fuse blown.

Honestly though, you could do it too. Your grandparents could, given enough space. This car turns superhuman feats into low-hanging fruit. Perhaps more impressive than my personal best top speed, is an earlier aborted attempt where a curve arrives earlier than anticipated so I turn in at 190mph and it just sticks. Better that that… it feels good.

The new wave of electric hypercars - including the Chiron’s new roommate, the Rimac Nevera – might have it covered off the line, but the Super Sport’s roll-on performance, the way it scoots from 100mph to 200mph, is just different gravy. It feels more exciting too, with mechanical processes you can feel and hear and smell. Here’s praying Mate Rimac finds a home for this engine, or a derivative of it in a future Bugatti model.

You mentioned the Nurburgring?

Ah yes, that old place. Typically, it started raining the moment we rocked up to the Devil’s Diner car park at the start barrier – surrounded by slack jaws and a sea of phone cameras. Clearly bringing someone else’s £3m hypercar on cut slicks, to a public session on the world’s scariest racetrack, in biblical weather, isn’t really the done thing. Who knew?

I’d love to tell you I learned about the limits of the Super Sport’s lateral G, regale you with stories about gentle breakaways into four-wheel drifts, heroic speeds around the carousel or about how mighty the brakes were at the end of the straight… but in reality, this was one of the stupider things Top Gear has done.

Within one corner it’s clear this is a fight for survival… and my family’s solvency. To have any meaningful purchase on the surface Cup 2s need temperature – about 35 degrees a corner in the wet, but heating them up when anything faster than a jog and a whiff of steering lock equals a code brown moment, is next to impossible. So we slide around like we’re on ice, waiting to hit something and steal tomorrow’s headlines. Miraculously we make it around.

Even more miraculously Andy Wallace agrees to have a crack himself with me riding shotgun, and confirms it’s pretty much undriveable out there. Still, what a day. What a car.