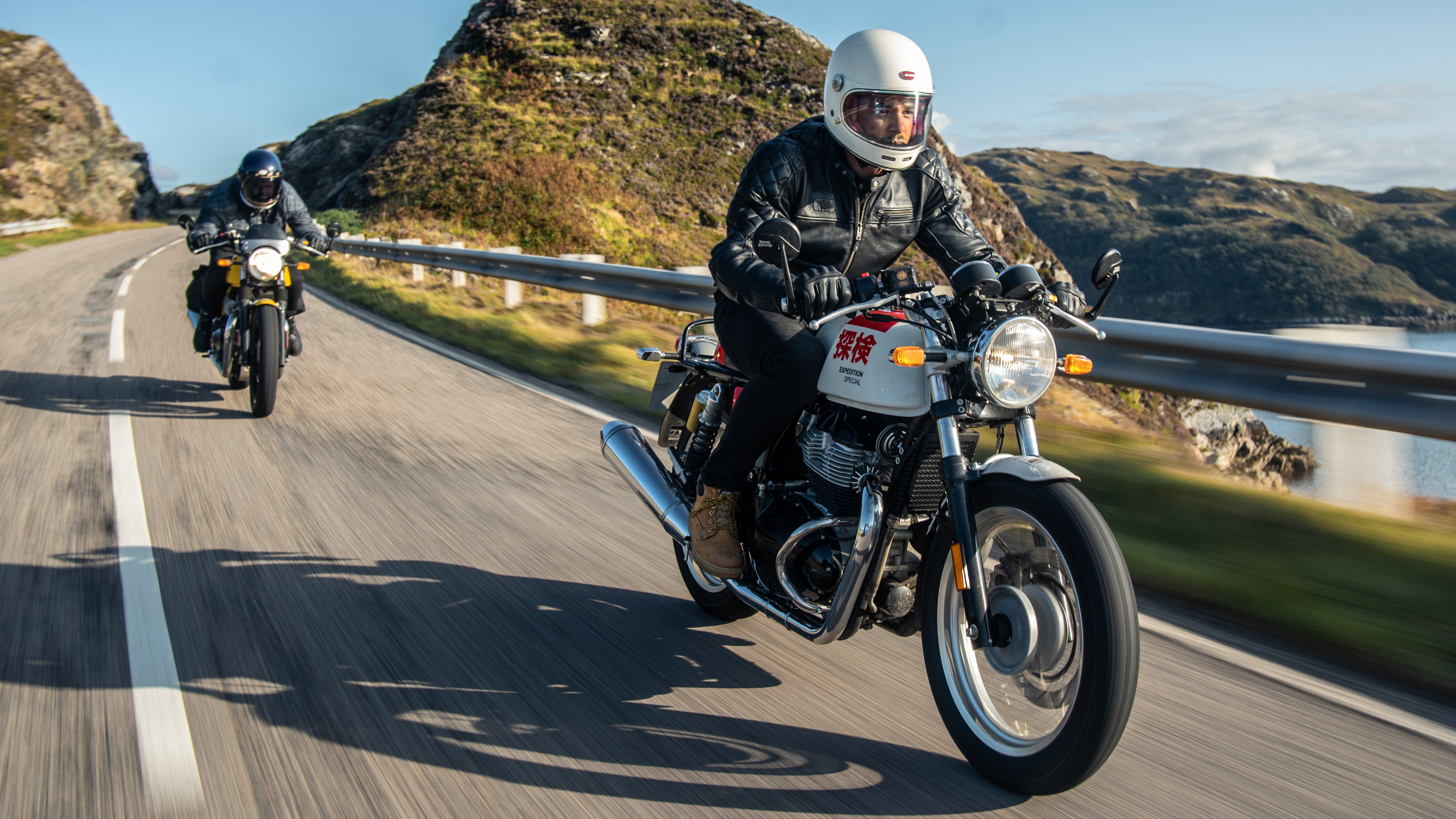 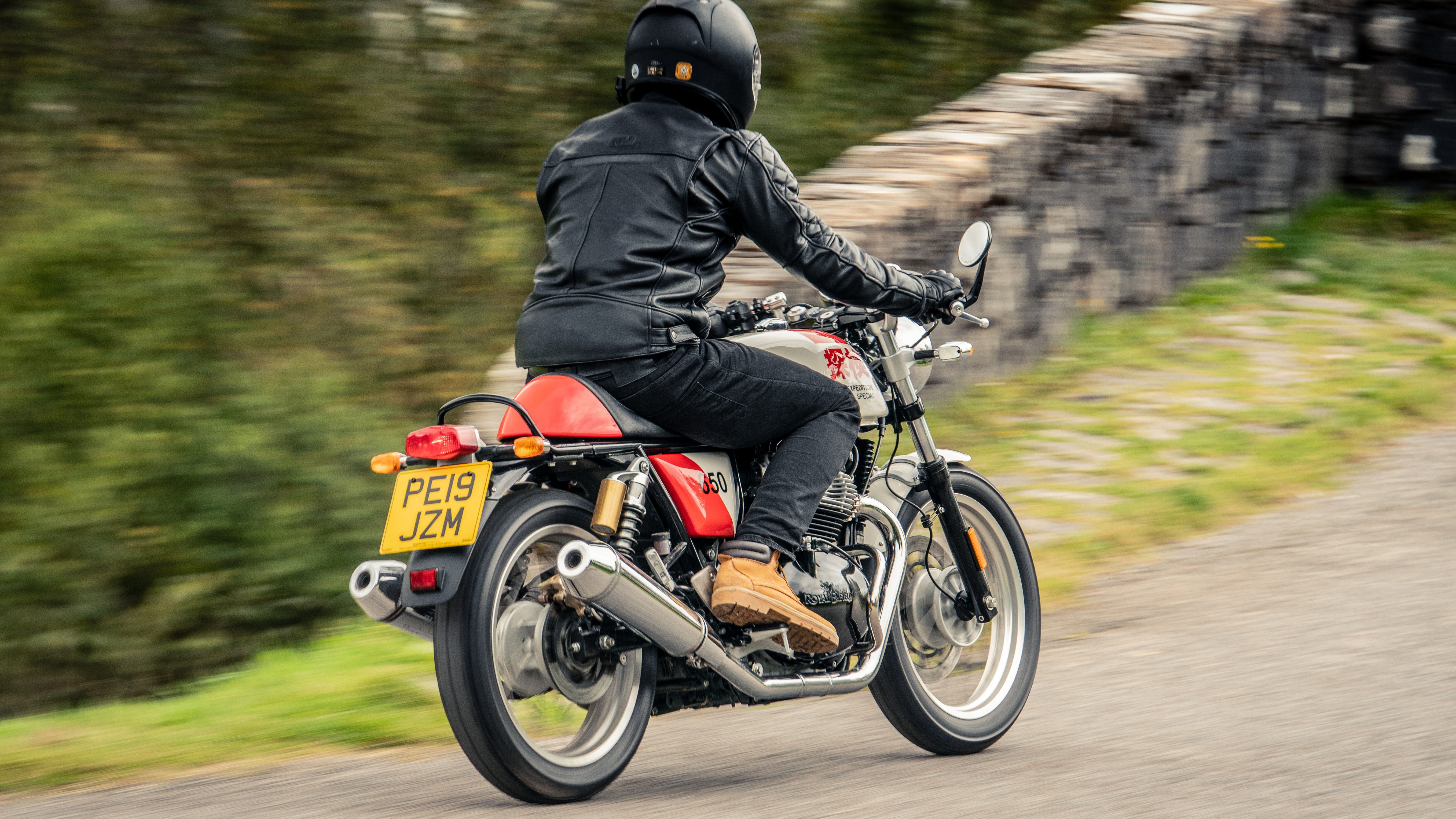 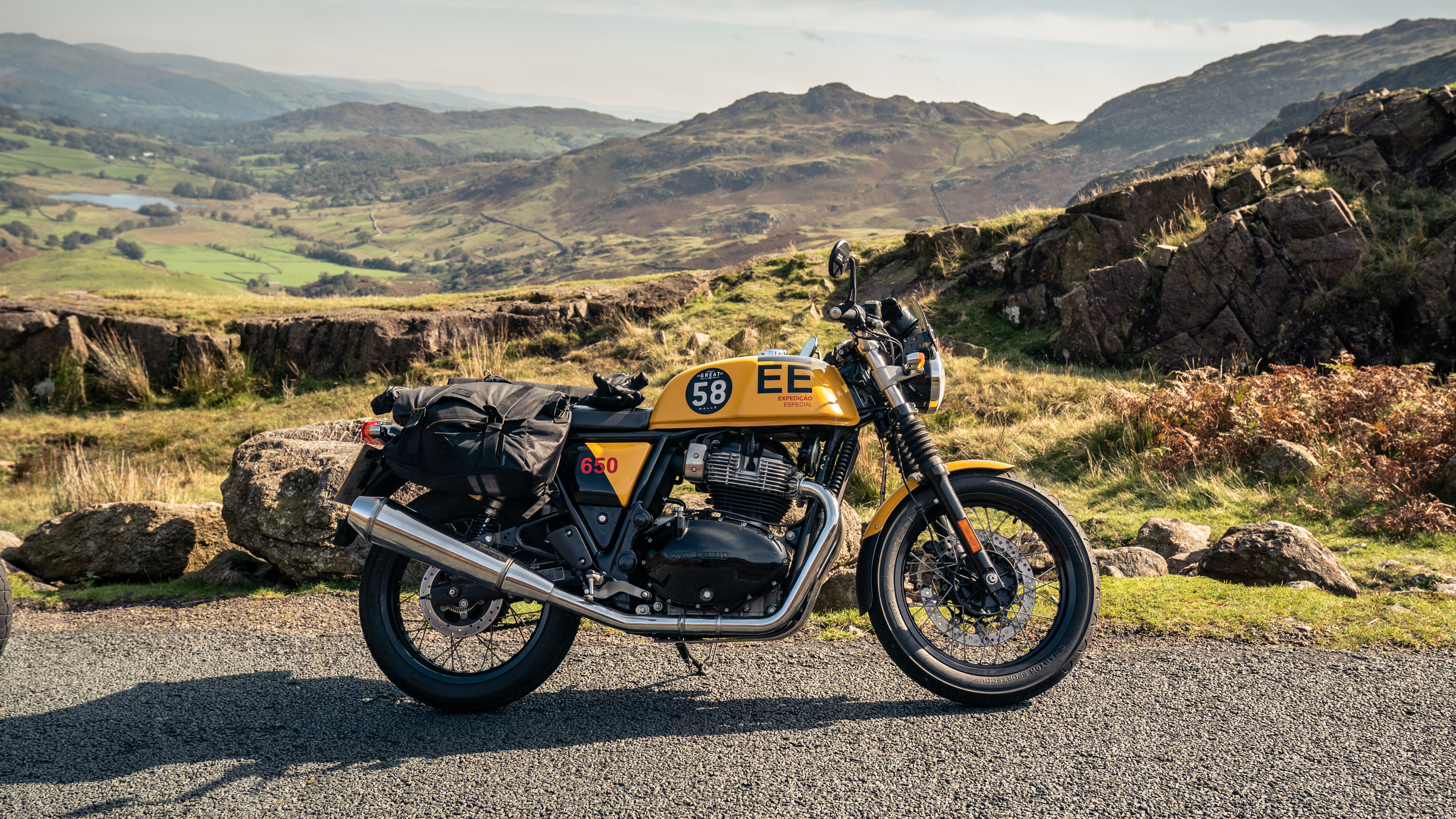 The Royal Enfield Continental GT 650. One of two 650 twins that Royal Enfield has brought to market to take on the likes of the Triumph Street Cup and Kawasaki W800. It’s the sister bike to the Interceptor 650, a naked cruiser that harks back to doobielicious '60s California thanks to a distinctive teardrop tank, quilted dual seat and wide, braced handlebars. A good-looking and easy to ride bike that has taken the market by storm, recently becoming the best selling bike in the UK. Why? Because it offers serious bang for your buck, starting at £5,700. Which is a hell of a lot of bike for under six grand.

So how is the Continental GT different?

Looks, mainly. Well, completely. Both the Interceptor and Continental are mechanically identical in almost every way.  They both feature a brand new, air-cooled 650 parallel twin. It doesn’t make huge amounts of power or torque, but that’s not really the point. In an era of potty numbers, it’s perfectly adequate for all scenarios and means you actually use it. But the main difference between the two bikes is that the Contental is a café racer, capturing the spirit of the Continental GT 250 from the Fifties.

It replaced the wide handlebars with a set of clip-ons, changed the shape of the tank, replaced the bench seat with a single-seat unit (that can be specced back, if you want to take a mate on the back) and moved the footpegs backwards. Small changes that make a big difference in not only the way it looks, but also the way it rides. As you’re forced into a more enthusiastic riding position from the Interceptors chin up, shoulders back stance, your mindset is changed to work the bike a bit harder. But – amazingly – it isn’t any less uncomfortable than the Interceptor. Normally on a café racer your wrists and hips would be crying out in agony. But we managed to do over 2,000 miles on one in under two weeks and had no issues. So, Royal Enfield, we doff our cap to you.

Wait a sec. Who is Royal Enfield? They sound very regal.

As brands go, there aren’t many that are quite as evocative as Royal Enfield when it comes to harnessing the power of old-school. Having made its first motorcycle in 1901, it’s the oldest motorcycle brand in continuous production. Back in 1955, production shifted from the UK to India where it has remained ever since; indeed, there are over three million Royal Enfields in India. And for the first time since 1970, Royal Enfield is bringing back a big twin-cylinder to draw a more international crowd to the iconic badge. Hence the Continental GT and Interceptor.

An absolute doddle. Not being overly heavy, with light controls and a comfortable seat, you sit in a commanding position that doesn’t compromise your ability to use the controls so you feel confident as soon as you fire it up. Where you’ll be disappointed by the noise. But don’t worry, there are plenty of cans now on the market to sort that out.

The four-stroke, air and oil-cooled parallel twin is smooth thanks to a 270-degree crank. And, with 47bhp and 32lb ft of torque, it picks up low in the rev range and pulls purposefully and cleanly from 2,500rpm all the way through the six-speed (a first for Royal Enfield) ‘box. The last three gears literally feel like there’s no difference in them, but that doesn’t matter, as you still use them all as it adds a layer of communication and fun that the car industry is slowly wiping out. The engine’s linear delivery is buttery all the way up to the redline around 7,000rpm but, unfortunately, it never sounds truly naughty when you’re on it.

Although Royal Enfield’s HQ is in Chennai, the Interceptor and Conti GT were developed at its new technology centre at world-famous JLR parking lot, Bruntingthorpe Aerodrome here in the UK. Saying that, the suspension setup is very soft. Now, we may have equally potted roads as India, but in the UK we tend to hit them at higher speed – so on the Interceptor you end up running out of suspension and often hit the bump stops. Luckily, the ByBre brakes are decent enough for shedding the speed to bring things back under control, while the Pirelli Phantom Sportcomp rubber is plenty grippy for this style of bike, so you start moving around the seat and playing with the bike. It’s a properly entertaining little thing.

I’m digging the way it looks.

So are we. And, seemingly, everyone else on the road. No matter where you stop someone comes up and wants to have a chat with you about it. “That’s a proper looking bike, mate. Sod all that sports stuff. When I think of bikes, I think of that!” is a common reaction at petrol stations, which, given it’s got a tiny 12.5-litre tank, you visit quite often – every 125 miles or so.

The design is a classic that draws your eye in and around all the details. Initially, you’re struck by the dominating tank. But your eyes quickly wander to the big, polished 648cc lump hanging below, before sending you along the vintage down-round-and-out dual exhausts that shoot out the back in a V-shape. It’s a simple, clean, effective formula and wonderfully timeless.

It is. Starting at £5,700 (and going up to just over £6k if you want a posh finish or paint on your tank) it’s very competitive; significantly undercutting the likes of Triumph and Harley-Davidson. OK, the hardware and electronics (you get ABS and that’s it, the rest is done with a flick of the wrist) may not be as exclusive as its competitors, but it’s all you need when you’re not taking things too seriously. Plus, there’s no more affordable way to get a properly built, all-new but traditionally-styled twin cylinder. One that you can then spend your savings on endlessly customising until your brain explodes. Which is exactly what we’d do.