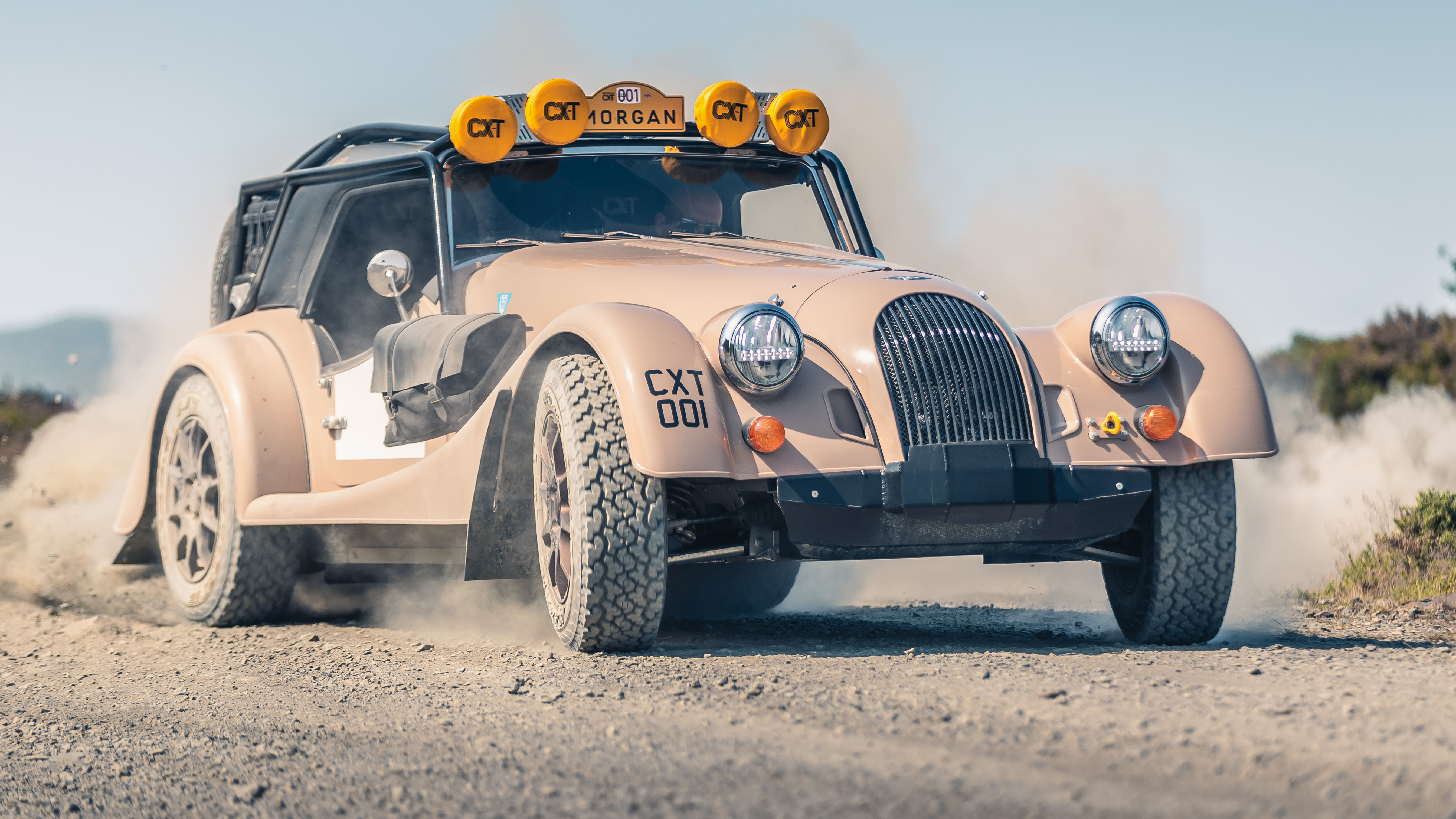 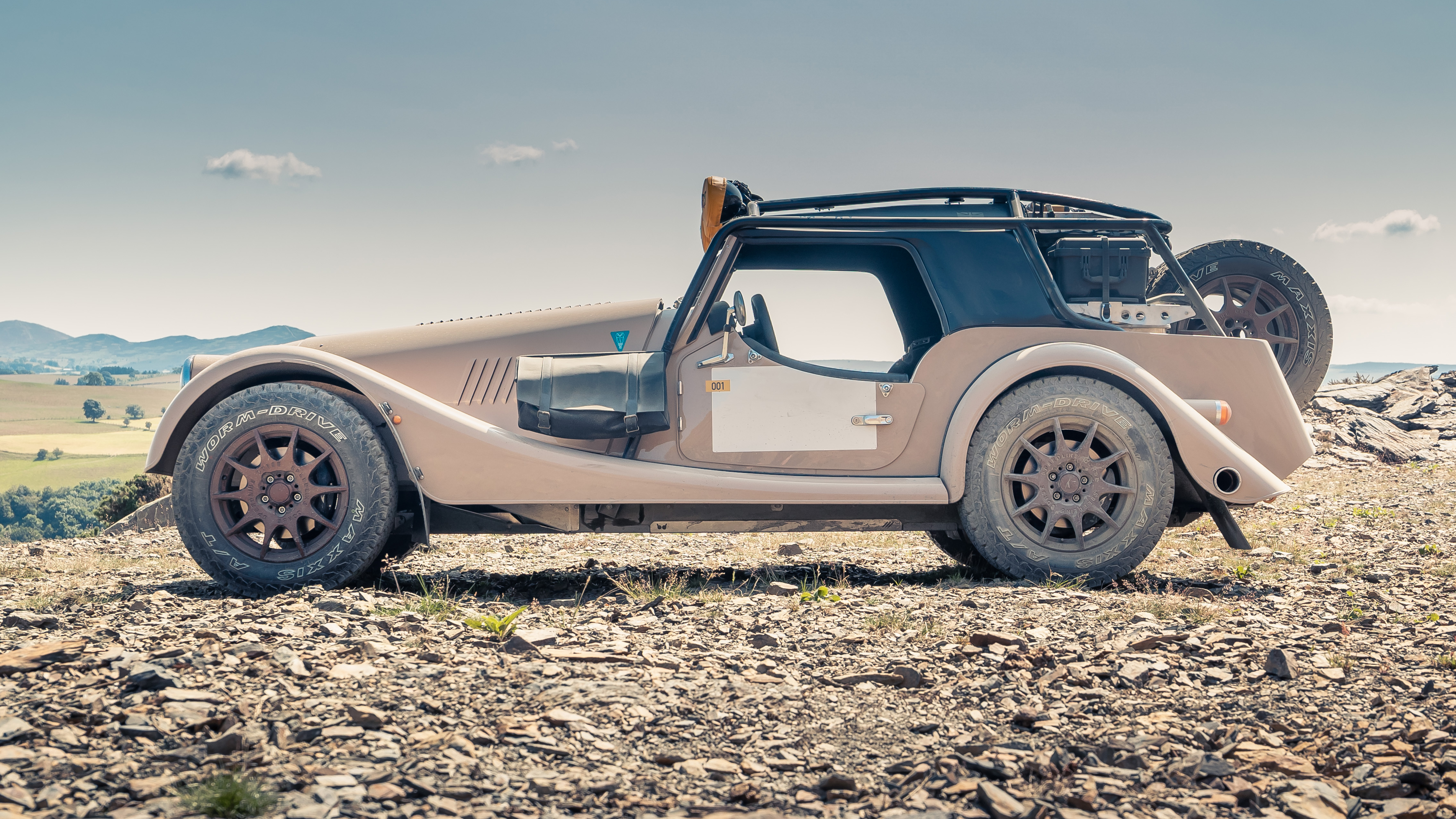 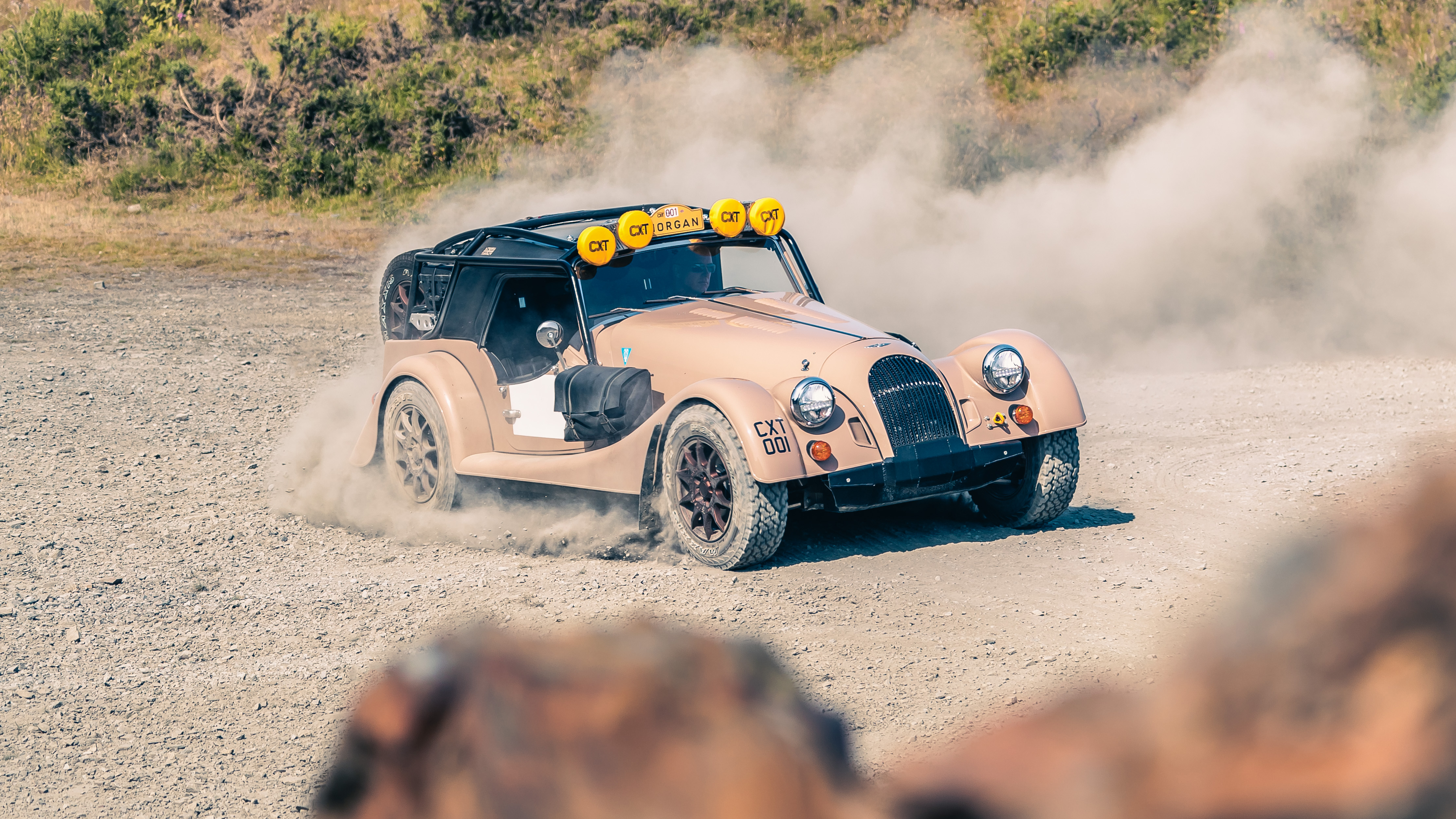 What in the blue blazes?

Yes, it takes some getting used to doesn’t it? Maybe have another look, allow your brain to unscramble before you get into this.

Sounds like you’re getting there. Here we go then. Yes, it’s a real thing. Morgan calls it the CX-T. CX refers to its latest generation all-aluminium bonded platform with 100 per cent better torsional rigidity than its predecessor. The T is for Trialling, a form of motorsport that involves people bouncing up and down in wheeled bathtubs while getting covered in mud. It’s niche.

But it used to be big. Well, a century or so back. The point is that Morgan has history in trialling going back 110 years, and that was leverage enough to give the design team an idea. Morgan isn’t alone. We’ve seen all sorts of rally-fied sports cars along recently, from Porsche 911s and concept Alpine A110s to the mad Lamborghini Sterrato. None, though, references trialling as its inspiration. Only Morgan.

So the design team got busy with pencils, and then what?

Apparently one of Morgan’s investors spotted the sketches on the studio wall, liked the look of it and put Morgan in touch with a firm called Rally Raid UK. Run by Mike ‘Beady’ Jones and Paul Round, who between them have done something like 25 Dakar races, they specialise in prepping cars for overland expedition races. Safe to say they’d never taken on anything like this before.

Beady, a talker so straight you could use him as a plumb line, tells me all the Plus Four’s deficiencies and what it’s taken to put them right while Morgan’s team squirms behind him. It’s quite a list. The stand out one is rear suspension travel, “that was basically on the bump stops before we started, we’ve now got 140mm of rear travel”, he tells me.

Hang about, are you telling me this is going to do Dakar?

Unfortunately not. Rally Raid UK are very handy with welding and off-roading, but not even they could get a Morgan Plus Four to abide by the necessary regulations. Instead Morgan says this car is for ‘overland adventure’. You don’t have to have it kitted out like this. You could swap out the spare tyres and fuel cans for mountain bike or ski racks, stick a roof tent on the top alongside your kayak. It’s up to you. The CX-T is basically a mobile panier rack.

Are you saying it’s all show, no go?

Absolutely not. What’s been done has been done properly. And it’s quite a list. What hasn’t changed is the chassis and drivetrain – the CX-T uses the standard Plus Four’s BMW-sourced 2.0-litre turbo and six speed manual gearbox. That’s 255bhp and 258lb ft and even though weight has climbed quite a bit from the 1013kg donor car, it’s still got plenty of poke.

Rally Raid UK has then gone through it with a fine toothcomb. The longer suspension arms from the Plus Six have been fitted to increase track widths, there are new rally-spec springs and four-way adjustable Exe-TC dampers, ground clearance stands at 230mm, there are new bushes all over the place, bigger 16-inch wheels wearing 215/70 Maxxis WormDrive tyres, massive underbody protection…

And it’s got a freaking EXOSKELETON!

It does, bolted straight into the chassis and subframe. It’s also got a Dakar-spec airbox disguised as luggage on the front offside wing, mimicking the actual luggage opposite. Morgan insisted on buckle closures. I won’t repeat Beady’s opinion of buckles. He’s hidden industry-grade Velcro in there as well.

The exhaust system has been tucked away and now exits the rear side so it’s less vulnerable. Don’t want the upper part of the doors on? Unclamp ‘em and attach them in the bespoke holders on the roof. There’s also spotlights, solid towing eyes and a raised bonnet to improve cooling.

Can you see over it OK from inside?

Absolutely, you’re still looking down a load of louvres because you sit so high that the steering wheel is largely tucked down between your legs. Thankfully the driving position forces your legs out quite straight. The seats aren’t Dakar-spec buckets, but only because if they were, I suspect it would be nigh on impossible for anyone to get in and out of them. These are less bad than I suspected, actually do a decent job of making sure you don’t fall out the open topped door. Rear visibility is zero, so you’ll be relying on those small circular side mirrors. Good luck.

The driver’s side of the cabin is standard, over on the left there are some rally spec modifications: a phone mount, a map light, USB slot, slimline document wallet and the controls for the rear differential.

Hang about, a new rear diff?

Yes, BMW’s electronic diff, not available on the standard Plus Four, but essential if you want any semblance of traction on the loose. Two switches, one varies the locking level, the other locks it solid.

It’s hilarious. Initially it’s the sheer novelty of it. The cabin and the view down the bonnet are pure Morgan, and if you’ve driven one you’ll know how bizarre it is that the rest of your vision is occupied by dirt track rather than black top. Morgans don’t normally do well anywhere there are cat’s eyes, let alone more testing lumps. So I cruise round timidly to start with. There’s more elbow room than in an old Defender but not much, so the natural position to adopt is to rest one arm out the window.

And this feels good. The engine’s got more than enough torque and BMW’s turbo tech is spot on, so there’s minimal lag and you breeze around easily. The suspension is calm and composed too, and because your backside isn’t being slammed against the bumpstops, stones are clearly pinging off something much tougher than they are and the centre of the track isn’t grinding against the undersides, you build confidence that the CX-T might be able to cope with more.

Quite a lot. The approach angle (the angle between the contact patch of the front tyre and the bumper) is good, the departure angle (same, but at the back) slightly less so, but even if it does rub against the ground, it’s sheet steel doing the rubbing, not delicate bodypanels. Grip from the Maxxis rubber is strong, whether on steep grassy slopes, even steeper rubbly slopes or going around corners.

It’ll get far further than you’d ever expect. Light weight, good tyres and the switchable diff see to that. It clambered around gamely, doing things a Plus Four has never done before. It’s also way more robust than I expected. OK, there’s still scuttle shake and rattle, but it’s more tightly controlled and the chassis feels stiffer and more solid than usual. It doesn’t take long to build confidence and start throwing the CX-T around. 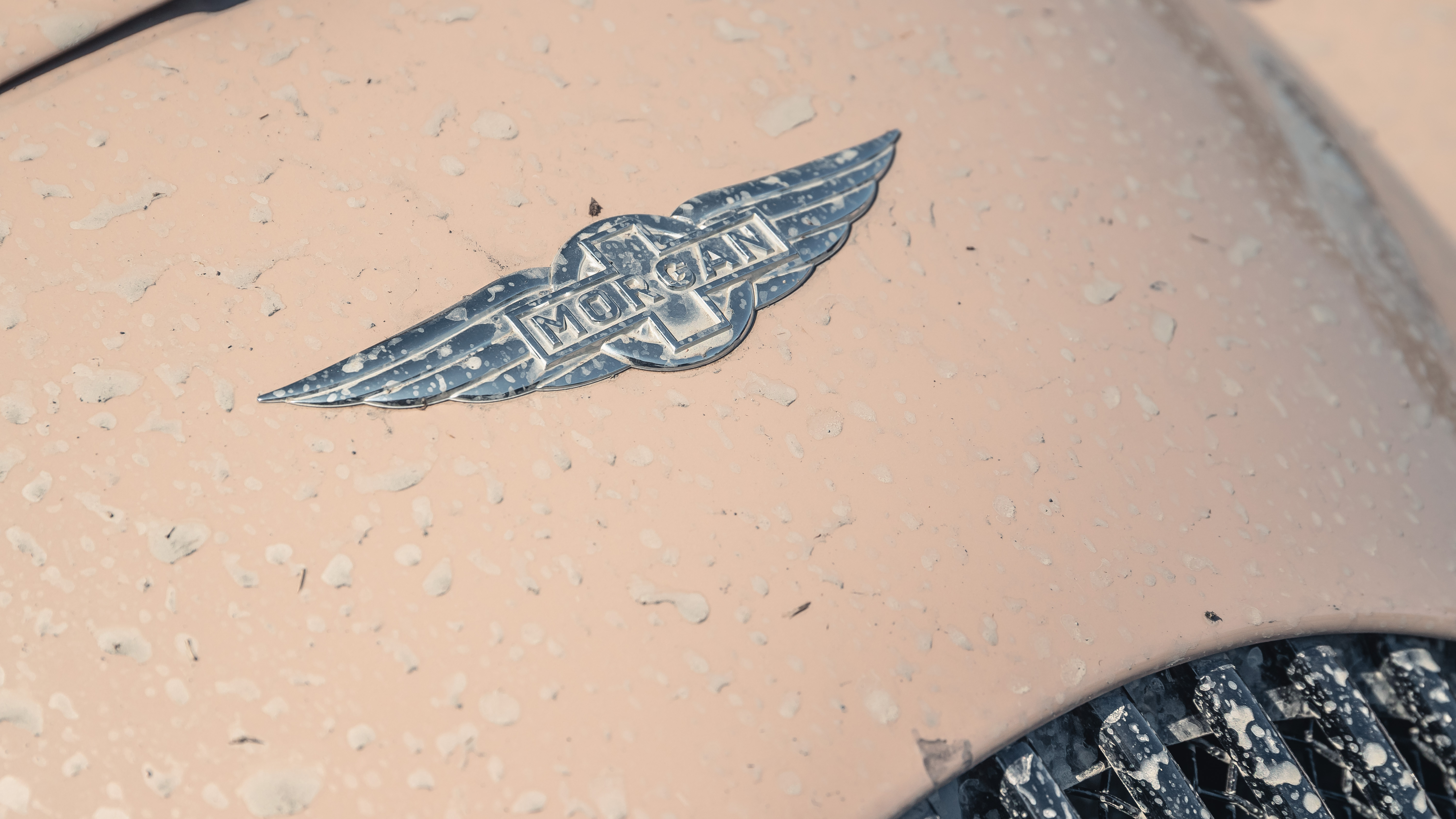 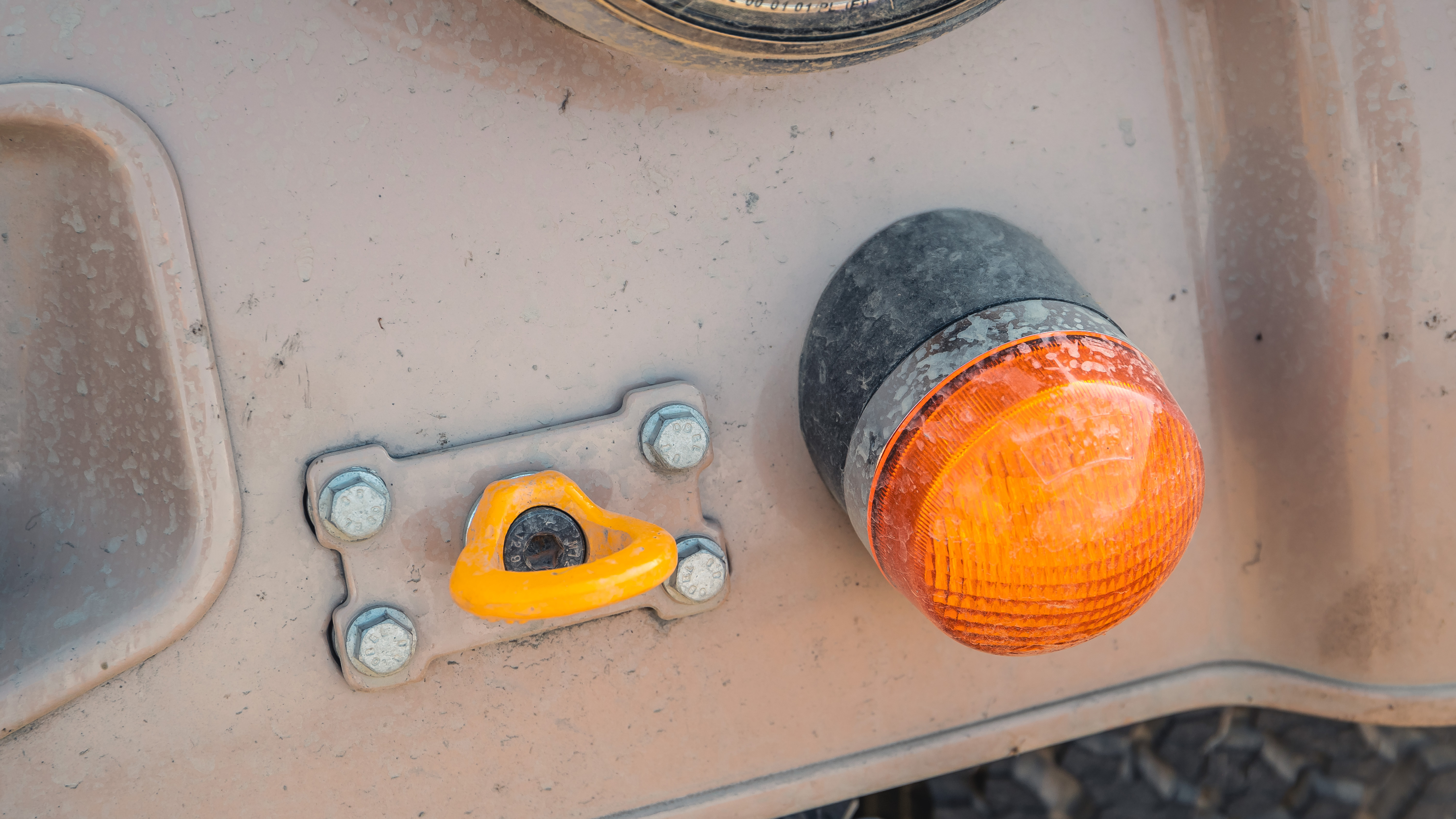 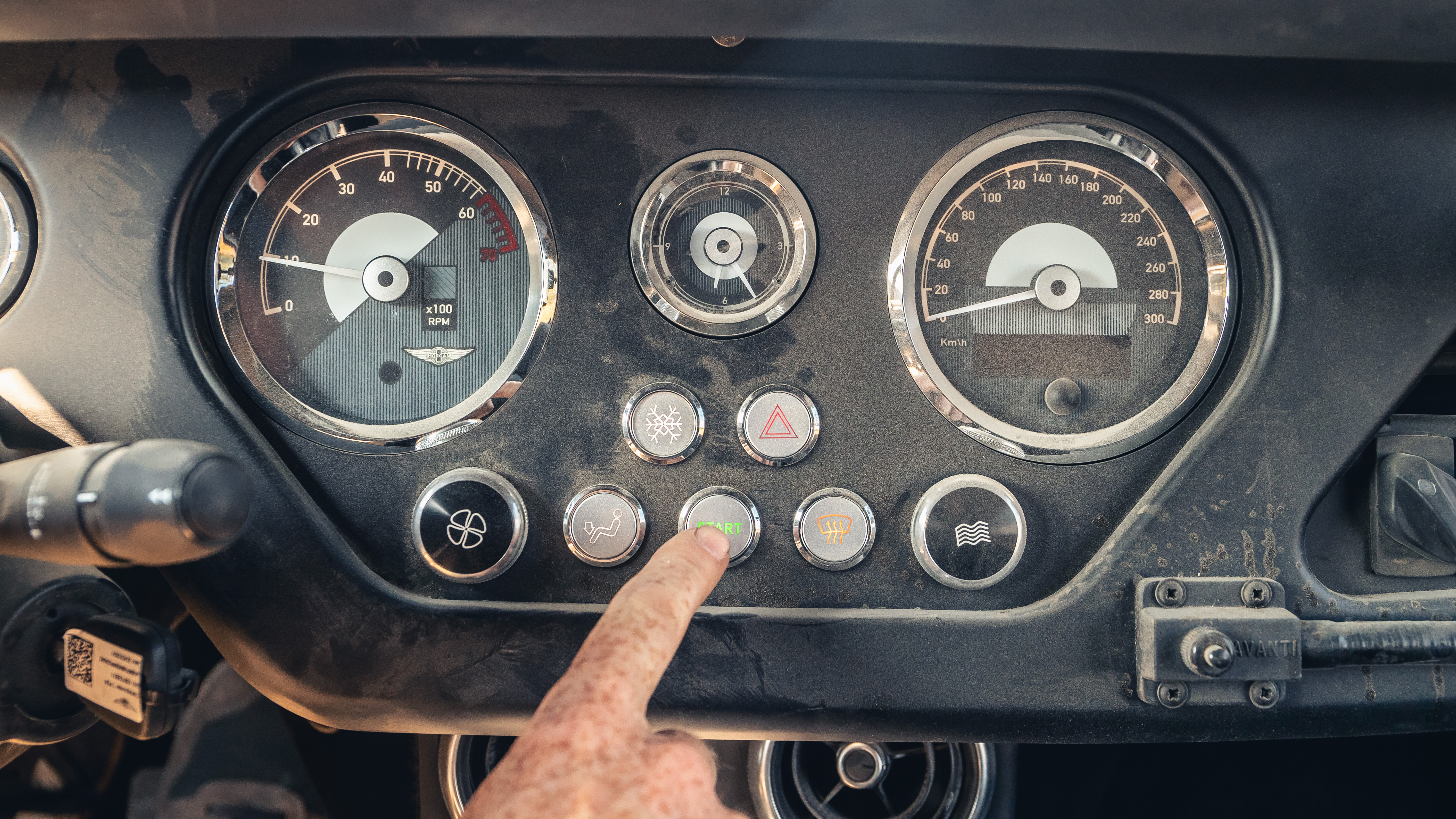 How does it take to that? Like a duck to kayaking, I’m guessing…

Guess again. It responds brilliantly. Because it has a relatively long wheelbase and you sit over the rear wheels you’re in the best position to detect movement at that end, so when it starts to oversteer you know about it. And it does readily, because there’s a surfeit of power. It’s not like the front end is short of bite though – it turns in well enough and actually proves very well balanced, so you can charge through long fast corners and play with the angles on the steering and throttle. It’s a hoot, secure and confidence-inspiring. Decent brakes, too, but that mostly comes back to the tyres.

The CX-T’s modern turbo four doesn’t make a particularly inspiring noise, although there’s a bit of rumble and pop when you lift off. But hand-on-heart I had a far better time driving this – and found it far more capable and drivable – than I expected. I was tearing about, treating it like a rally car, then getting out, looking back and being astonished all over again that it was a Morgan.

Keep this up for a while and you get remarkably dusty inside. If you want to embrace that it is possible to remove the roof and retain the rollcage. I did a watersplash or two and failed to get massively wet because the cockpit is narrower than the wings. That was a surprise.

What about on road?

Didn’t get the opportunity as I was having too much fun off-road, but I have a sneaking suspicion that the alterations – specifically to the suspension – will make this a better road car than a standard Plus Four as well. More travel and cushioning, more usability. And I suspect that’s where most owners will actually end up using them.

Some have already declared they want to do big cross-continental drives to remote areas, others want it as a tender for their super-yacht.

How many are being built?

Agreed, but answer me this: which would you rather drive and be seen driving, this (even when it's the same colour as the dust cloud it’s towing) or a regular Plus Four? Think of the CX-T as a brand builder as much as a business case. It exists not simply to make money (I suspect it’ll barely wash its face), but to bring a new audience to Morgan and show them the firm isn’t afraid to do fun things.

It’s a curiosity. The car it most reminded me of was the Ariel Nomad, a car that’s entirely exoskeleton and has a similarly vague operational area, yet justifies itself by being a complete hoot to drive. The CX-T is in a similar vein: there’s no need for it, no job description it answers to and yet it has magnetic pull. But more than that I hope it might yet have a role to play: I hope the CX-T’s smooth riding, longer travel dynamics rub off on the road cars.