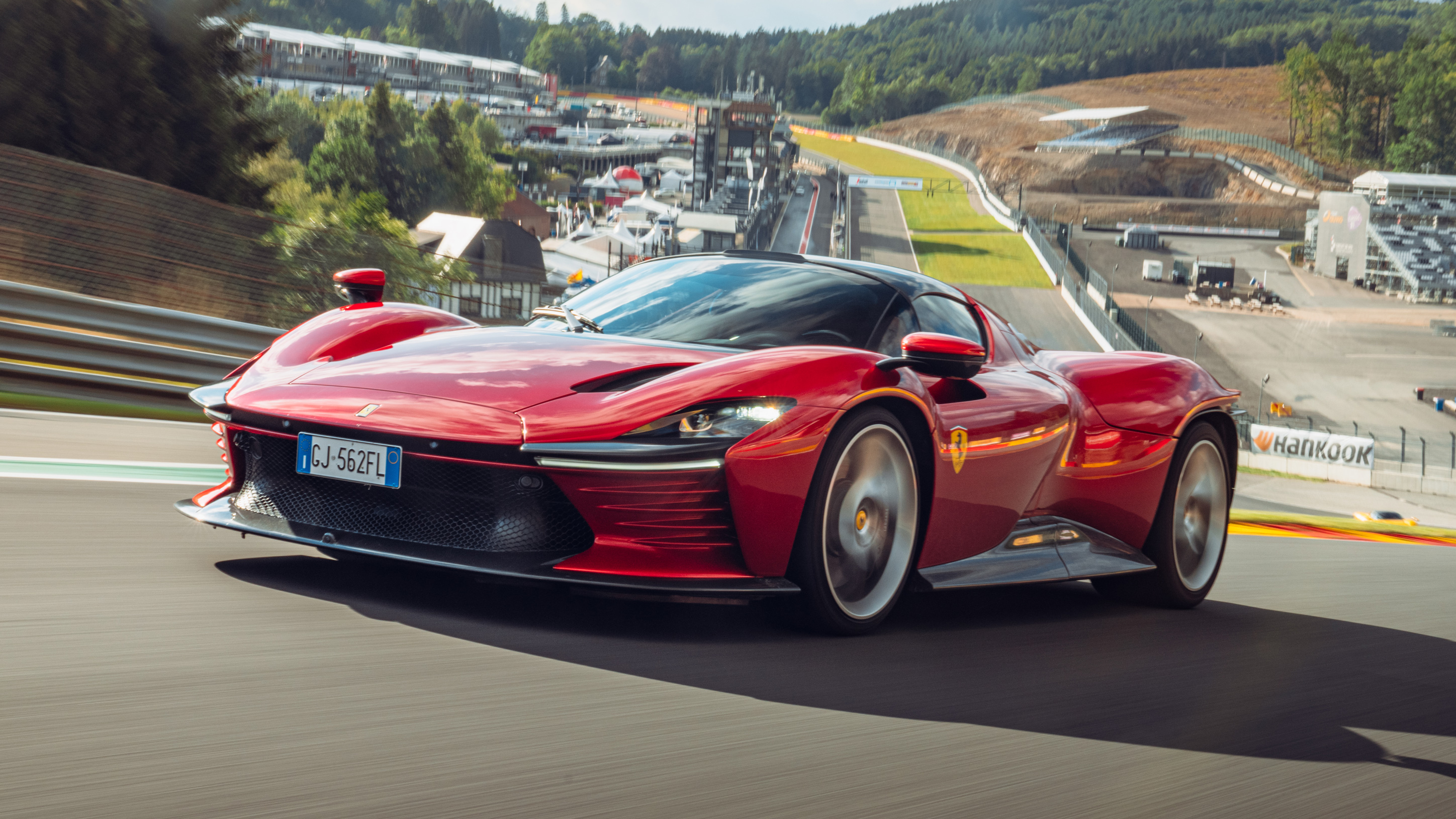 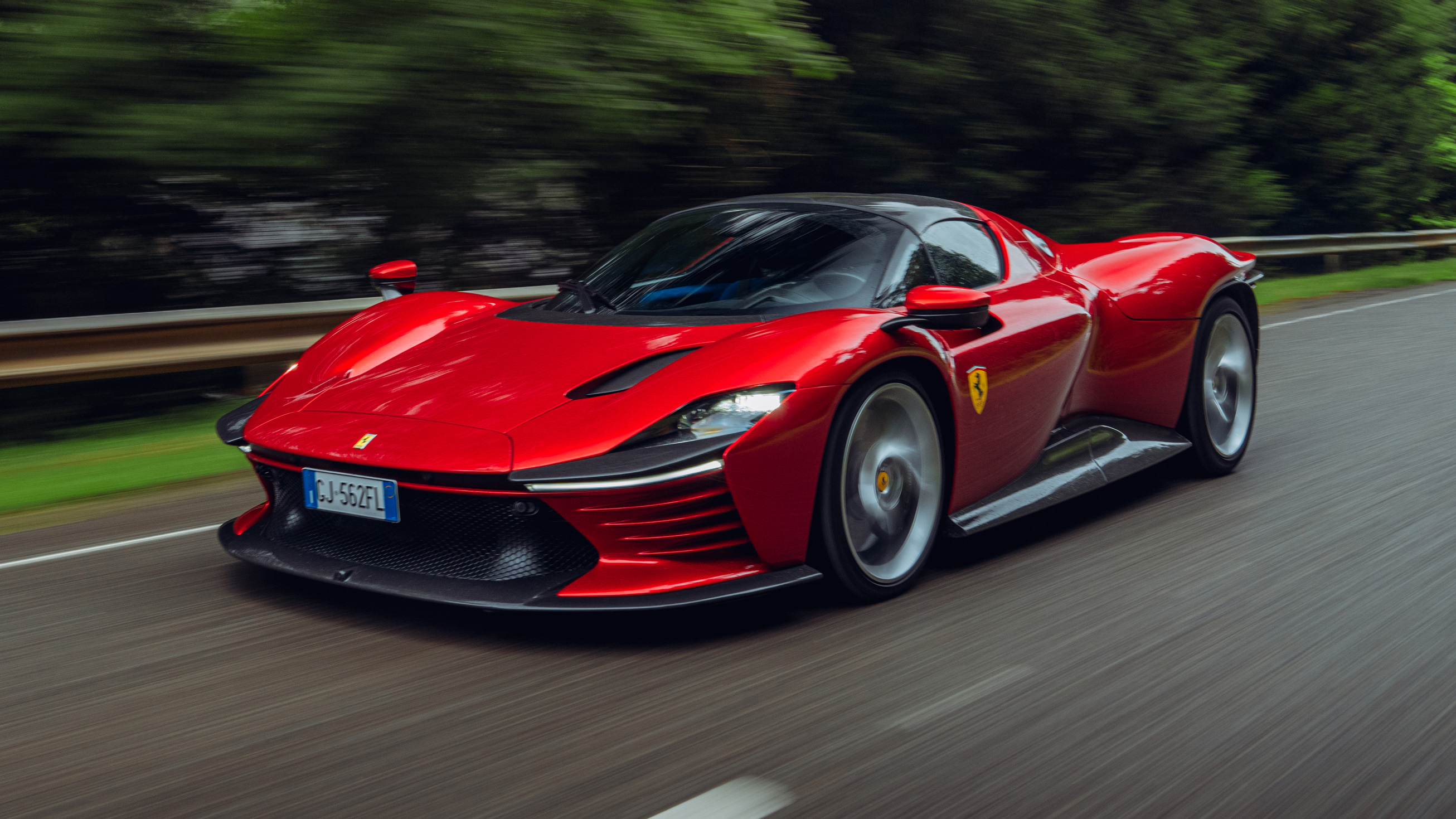 Sweet lord, what is that?

This is the new Ferrari Daytona SP3 - the third Icona model (the first two being the beautiful but largely pointless Monza SP1 and SP2 from 2018, yep the ones without windscreens) and Ferrari’s homage to its impossibly glamorous sports prototype racecars from the 60s.

Ferrari says you won’t catch it knocking out any straight resurrections from the past like the new Lamborghini Countach, but it is happy to reference its history. A lot. Which is where its Icona range comes in: “To distil the very essence of an era and use it as a springboard to create new concepts that become icons for future generations.”

A hybrid I assume?

Incorrect. This 1-of-599, sold-out, £2 million, mid-engined psychopath is powered by the 812 Superfast’s magnificent naturally aspirated 6.5-litre V12, albeit uncorked further with upgraded internals - like titanium con rods - for 828bhp. That makes this the most powerful engine Ferrari has ever fitted to a road car, which focuses the mind. It also now revs to a screaming 9,500rpm… the same redline as the 812 Competizione.

Sure, it might lack the LaFerrari’s 986bhp e-assisted knockout punch, but 0-62mph in 2.85secs and 211mph (almost identical power and performance figures to the much more affordable V6 hybrid 296 GTB, stats fans) isn’t exactly shabby.

And just to head off rumours nice and early – yes this is an all-carbon, mid-engine, V12 supercar much like LaFerrari, but this is not simply a LaF with the hybrid bits pulled out. That chassis had to accommodate batteries behind the seats and an e-motor so a straight copy and paste wouldn’t have made sense.

Is it an analogue LaFerrari in spirit, though?

Ferrari will strenuously deny it, but this is a safe space, and we say… sure, why not?

Let’s cut to the chase then, how good is that engine?

We’ve heard astonishing things about the 296’s new twin-turbo V6, nicknamed ‘piccolo V12’, but there’s still no substitute for twelve pistons, untainted by turbo or electricity, having a barney behind you. This engine rips, picking up properly around 3,500rpm with a linear shot of violence straight through to 9,500rpm, by which point you’re both breathless and travelling a wee bit fast.

The sound is special - a bassier intake warble from inside the car with the roof on, but a shrieking wail of decibels to anyone lucky enough to be in the vicinity. That engine, this seven-speed DCT gearbox, it’s the supercar powertrain perfected.

And for a car that lists Le Mans winners among its greatest influences, it’s not nearly as harsh as I thought it would be. Dial the Manettino up to Sport or Race, engage bumpy road mode and on the road it’s a sharpened blade with a comfort handle. Yes, you get gravel rattling around in the wheel arches and collecting on the sills, and no it wouldn’t be a joy to parallel park. But if you don’t mind buying a toothbrush and t-shirt when you get there, big big miles are there for the taking.

What’s it like when you prod it a bit?

The steering is as hyperactive as you’d expect from a modern Ferrari – breathe on it around the dead ahead and the front end just darts – but some noticeable extra weight has been added as a nod to the hairy-chested 60s. Love that. We also loved driving away from a gaggle of execs, engineers, designers and mildly concerned PRs very slowly and very delicately at the beginning of the day, but just a few hours later lobbing it about and using every last rev, because this is a car that wants to be grabbed by the scruff of its neck. Forget the fact it’s Surrey mansion money, you’re driving a 458 Speciale on anabolics.

Best bit? You don’t need to be on a Quali lap to enjoy it, because it’s infused with Ferrari’s secret sauce that manages to make 800bhp+ feel approachable, friendly even. Thanks to electronic wizardry the chassis is always on top of the engine, and this driver is mostly on top of it all. You might have to be very high up in Ferrari’s little black book to be invited to drop £2m on one of these, but it’s not a member’s only experience. It isn’t aloof, it democratises elite performance.

Did you have a go on track, too?

Ah, bit of a story about that. Yes, we got to drive it around the Spa circuit… but were limited to 44mph. Shame. Ferrari’s call not ours: “Due to the value of the car and the fact that it’s a limited-edition model, the maximum speed allowed on circuit is 70kph.” Brutal. Two hours on one of the world’s fastest racetracks, in one of the world’s most exciting cars… at congested-M25 speeds. Enough for a carefully-curated photo call, not remotely enough to destroy a set of tyres and get a bit ragged. Fortunately, the surrounding roads were wide and quiet.

My heart bleeds. Tell me about that name…

The styling is a melting pot of references from not just one car, but many. Those bulging front wings have a bit of 512 S and 712 Can-Am racers about them, the wing mirrors have been moved from the doors to front wings in classic endurance racer style, and the slatted rear end is an unexpected nod to Pininfarina’s 1968 Ferrari 250 P5 concept car. Google it, you won’t be disappointed.

Are you a fan of the styling?

Honestly? When we first saw pictures of the SP3 we thought it was a bit of a mess. The catfish front end, the puffed-up front arches, the venetian blind rear, it felt like too much. It was trying to reference too many things while simultaneously insisting on being something unique and future-facing – a noble aim, but ultimately a design cue (or ten) too many.

Yet, here we are, staring at it in an unremarkable layby on a quiet Belgian B-road, floored by its magnificence, its drama… the spectacle of it. For starters it’s ridiculously low and wide, something you’re constantly aware of on the public road as a tractor scrapes past, without flinching, in the opposite direction. But then there’s the details, and the thought poured into each of them, that you simply can’t appreciate on a computer screen.

The front (probably our least favourite part) is salvaged by retractable ‘eyelids’ that reveal the main beams. Then there’s the engine intakes perched atop the butterfly doors, with an air channel running clean through them, leaving the waist section corseted and perfectly smooth. Rear wheel arches, wider than the fronts, fill the wing mirrors and melt majestically into a full width rear lip spoiler (despite 230kg of downforce at 124mph there’s no active aero here, a deliberate ploy to keep the package period correct) that tips the stance forwards.

High pipes leave space for more diffuser and finally… the slats. Oh the slats. It’s medically impossible to take your eyes off them. “They’re repeated in the front intakes for a reason,” Adrian Griffiths, Ferrari’s Birmingham-born designer tells us. “It’s as if they run through the car, like a stick of Blackpool rock.”

Let’s dive in shall we? The butterfly door swings up and out, taking most of the sill with it, leaving a bare-bones view of the carbon tub you’re about to post your backside into. You sink into seats attached directly to the tub then draped in Alcantara that flows over onto the sills and centre console. Looks uncomfortable, but it’s anything but. The windscreen bends around you, you sit deep in the car’s guts.

Pull the wheel towards you, slide the spring-loaded pedal box around and it fits like a glove. We’ve never raced a Ferrari sports prototype from the 60s, but we’re assured by someone that has that the overall driving position and feeling of enclosure isn't far off. Want to see the sky? Five clips and the targa roof lifts off, we leave it on because there’s drizzle in the air.

Come on then, is it really worth £2m?

Probably not, but what is? It does however look and feel suitably special, and there’s authenticity to the details and influences that add intangible value for your friendly neighbourhood billionaire. To be given the opportunity to drive a Daytona SP3 is a sizable privilege, but the thrill for us isn’t the price or the rarity, it’s the execution.

Ferrari’s most powerful ever engine, with the correct number of cylinders unfettered by electricity, placed behind the driver then surrounded by carbon and electronics that feel totally natural and flatter the billy behind the wheel. It’s about as pulsating as it’s possible for a car with a numberplate to get. Ferrari at its very best… even at 44mph.