Read why you can trust our independent reviews
Greg Potts
Published: 14 Nov 2022
comments
Skip 15 photos in the image carousel and continue reading 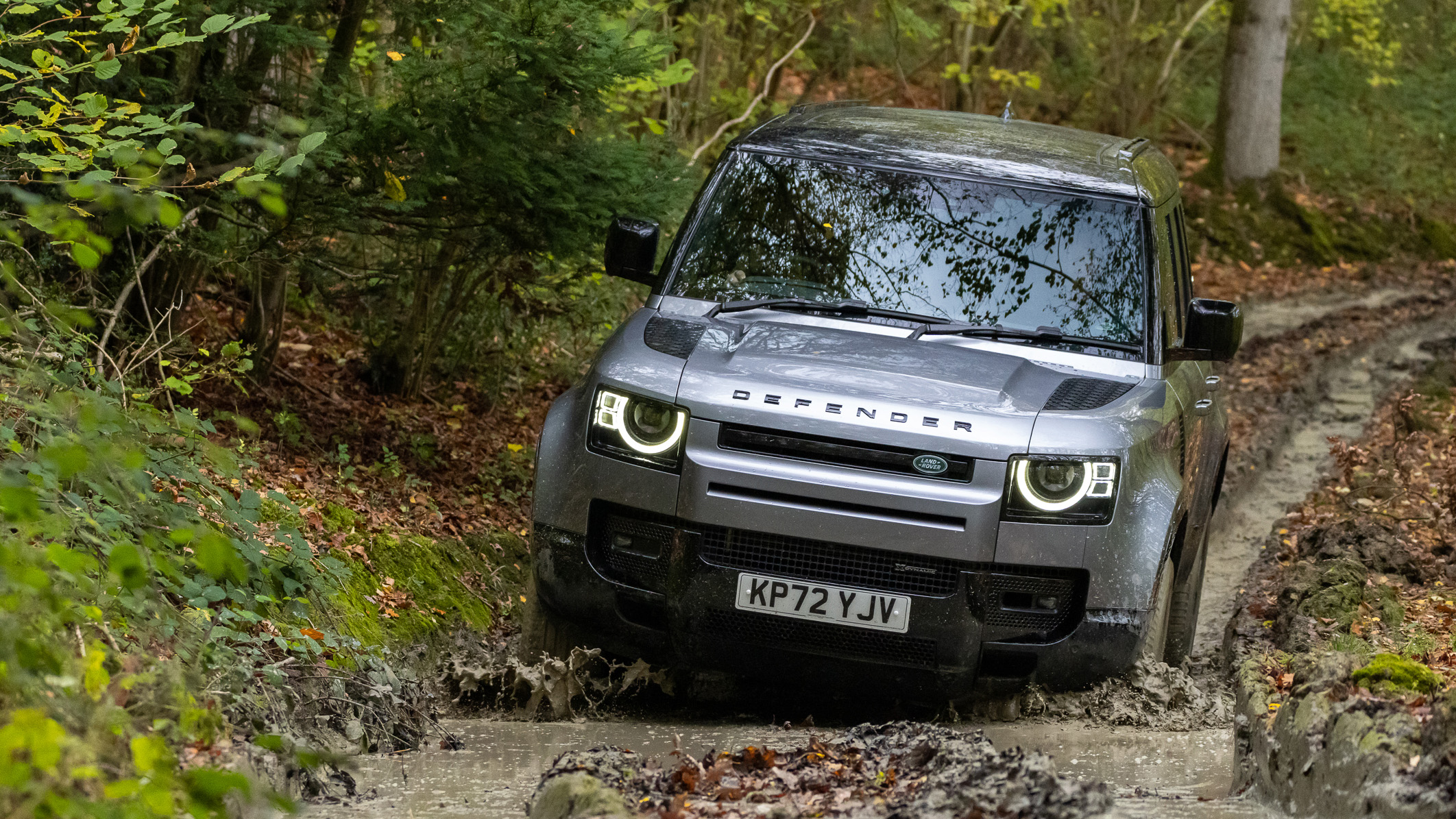 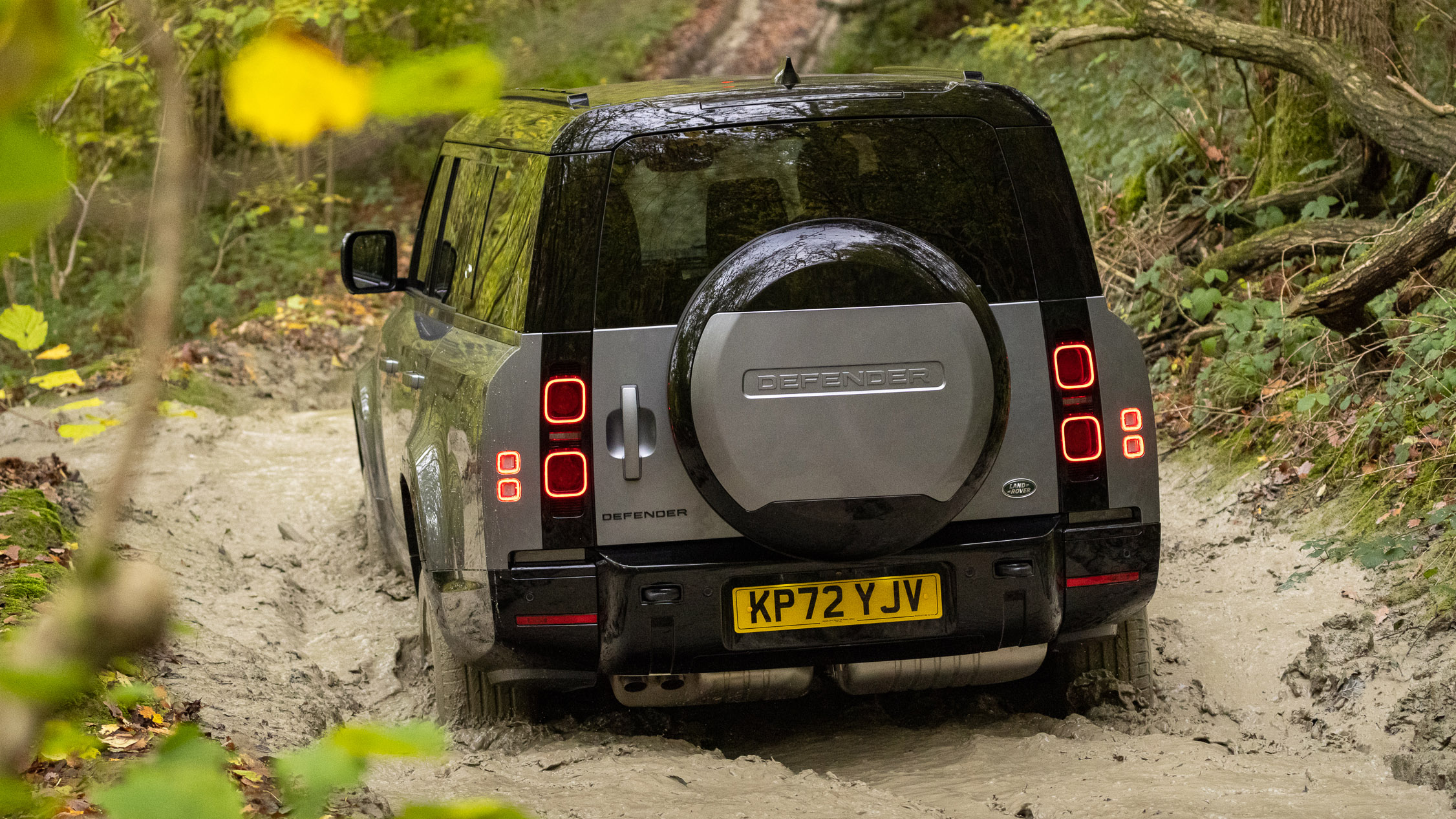 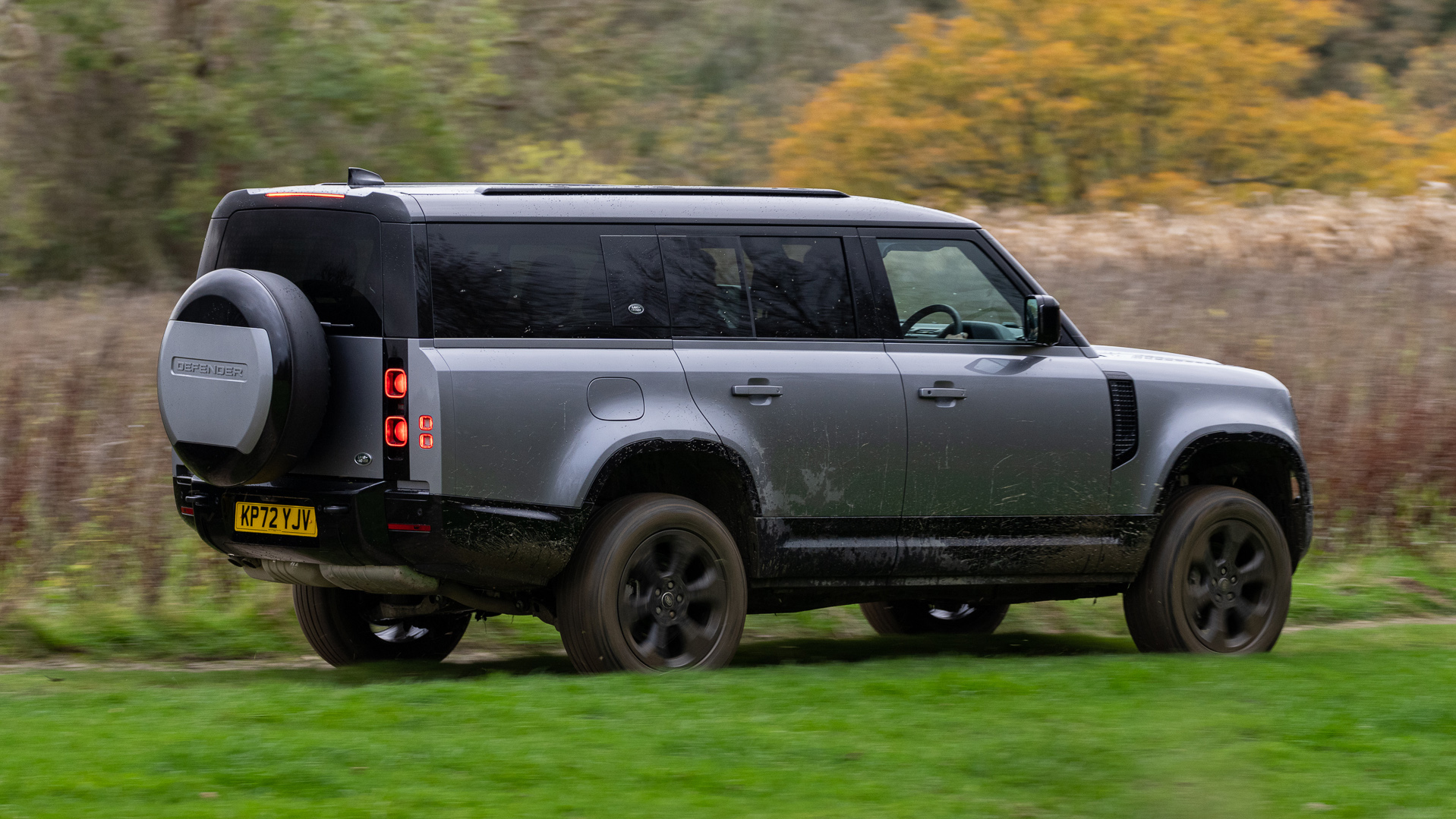 It’s a Land Rover Defender 110 with an extra chunk of bodywork plonked on the back and some more seats.

Come on, give me a little more info.

Well, this is the Defender 130, which was first shown in May this year and arrives as the fourth model in the Defender range. A quick recap – the others are the 90, the 110 and the commercial-spec Hard Top.

The 130 is most closely related to the 110, but there’s an extra 340mm of body added in and seating for eight inside (the 110 maxes out at seven). As a result, it is rather massive – it’s just under 2m tall, just over 5m long (not including the spare wheel) and 2.1m wide with its boxy wing mirrors included. The wheelbase is exactly the same as a 110’s.

There isn’t quite the range of powertrains that you’ll find in the smaller Defenders, with mild-hybrids the order of the day. You can have two MHEV petrols – a P300 (296bhp) or P400 (395bhp) – or you can have a mild-hybrid diesel in the form of the six-cylinder D300 (again producing 296bhp). At the time of writing you can’t have a V8 or a plug-in hybrid.

That’s probably the most important bit of the 130, so let’s cover it nice and early. Up front you get an 11.4-inch touchscreen and two seats – so far, so normal…

In the middle row you get less legroom than in a 110 (around 20cm less), although the seats do slide to help. There’s space for three there as usual, and the seats fold forward to allow access into the rearmost row. That final row also has three seats, and Land Rover insists that three adults could fit back there. We’re not so sure. It’s certainly roomier than the third row of most seven-seat SUVs, but once you’ve posted yourself in you’d probably only have enough shoulder space to comfortably sit next to one other. Granted our test dummy was six feet tall, but legroom is also a little bit of a squeeze. 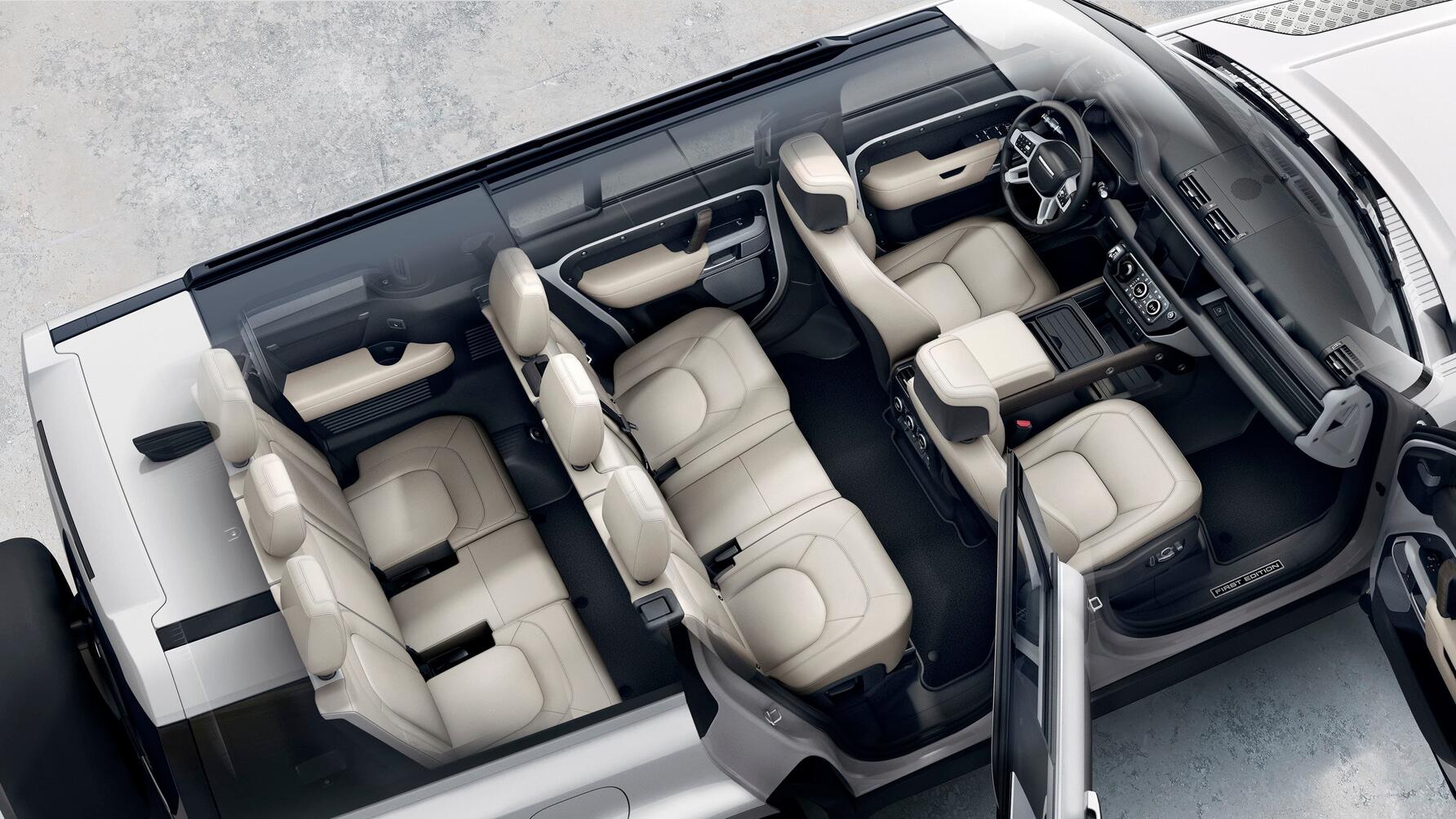 We should chat boot space too, because with all the seats in place there’s 389 litres of space in which you’ll fit a small load of shopping. But hang on, because how often will you be taking seven others to the shops? Fold the rearmost row flat and you get 1,232 litres of space, and if you fold the middle row too then there’s a cavernous 2,291 litres.

Well, you can read our 110 review by clicking these blue words, and on-road the 130 is remarkably similar with its pleasant manners, strong body control and light steering. The air suspension perhaps feels a little firmer than a 110’s to cope with the extra weight, but you’d really have to be nitpicking to notice.

We’ve only been behind the wheel of the D300 so far, but it’s a great engine and a remarkably refined diesel. With twin-turbos and 479lb ft of torque it’ll easily shift the big 2.66-tonne 130 and the eight-speed auto gearbox is as smooth as ever. Land Rover quotes a 0-60mph time of 7.1 seconds and a top speed of 119mph.

Used to a 110? The biggest difference you’ll find driving the 130 will come at the very end of your journey. Yep, parking. If you include the spare wheel on the back, the 130 is ever-so-slightly longer than a Rolls-Royce Cullinan. Yikes.

Again, like the 110 the 130 is remarkably competent off-road. You get all the standard Defender systems and abilities, including a twin-speed transfer box for low range gear ratios, a wading depth of 900mm and Land Rover’s excellent Terrain Response wizardry. 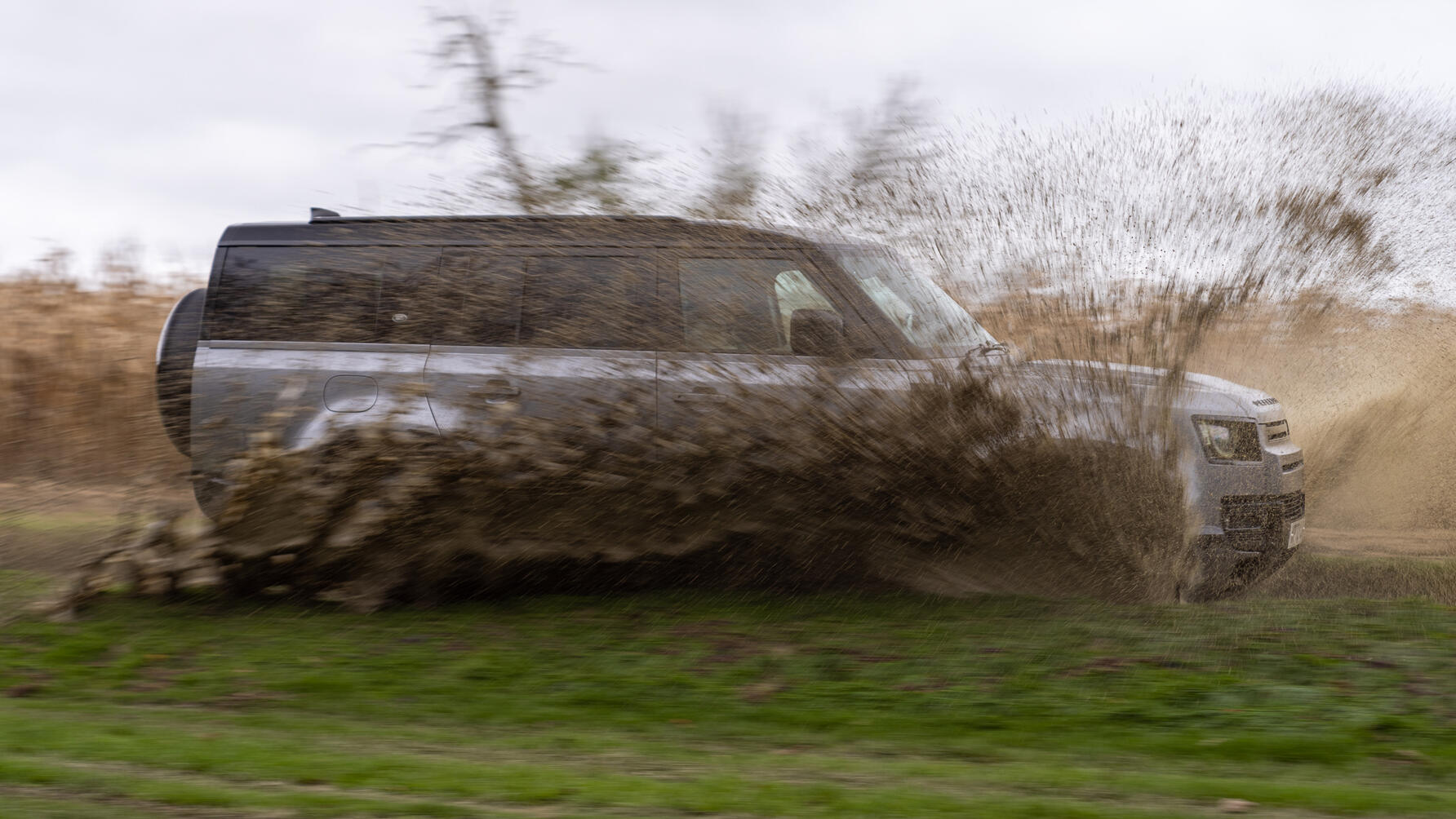 We took the 130 into some very rough stuff at JLR’s Eastnor experience centre. It copes remarkably well, with the different Terrain Response modes adjusting things like the traction control, the diffs, gear changes and the throttle mapping to get you through just about anything. Just remember that the extra row of seats is hanging out the back there, so your departure angle is compromised compared to a 110. We’re not sure that’ll impact too many buyers, however. Some might need to tow though, in which case it’s worth knowing that the 130 can pull 3,000kg.

How much does this all cost?

Great question, and one which we shall answer as quickly as we did your first.