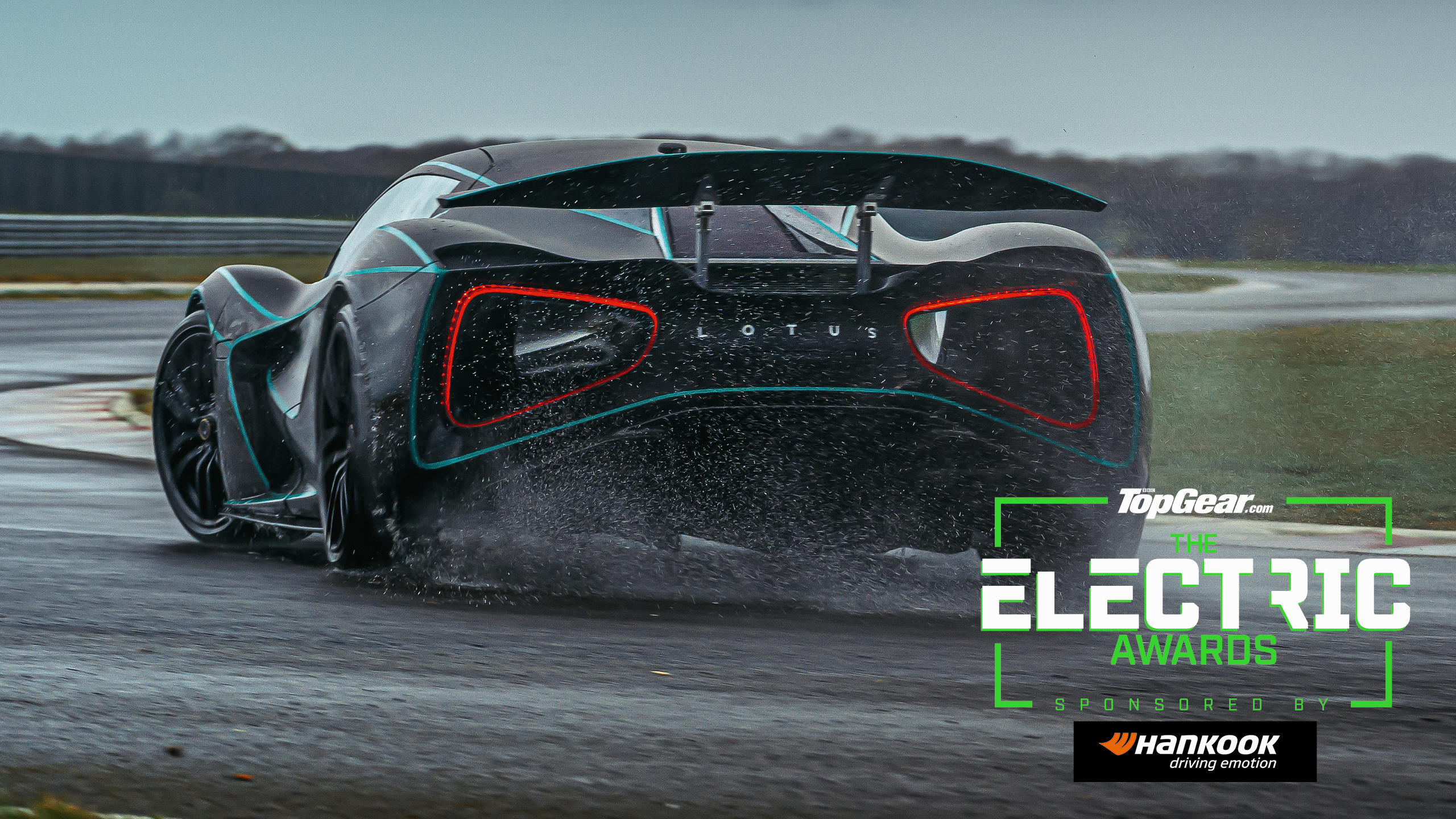 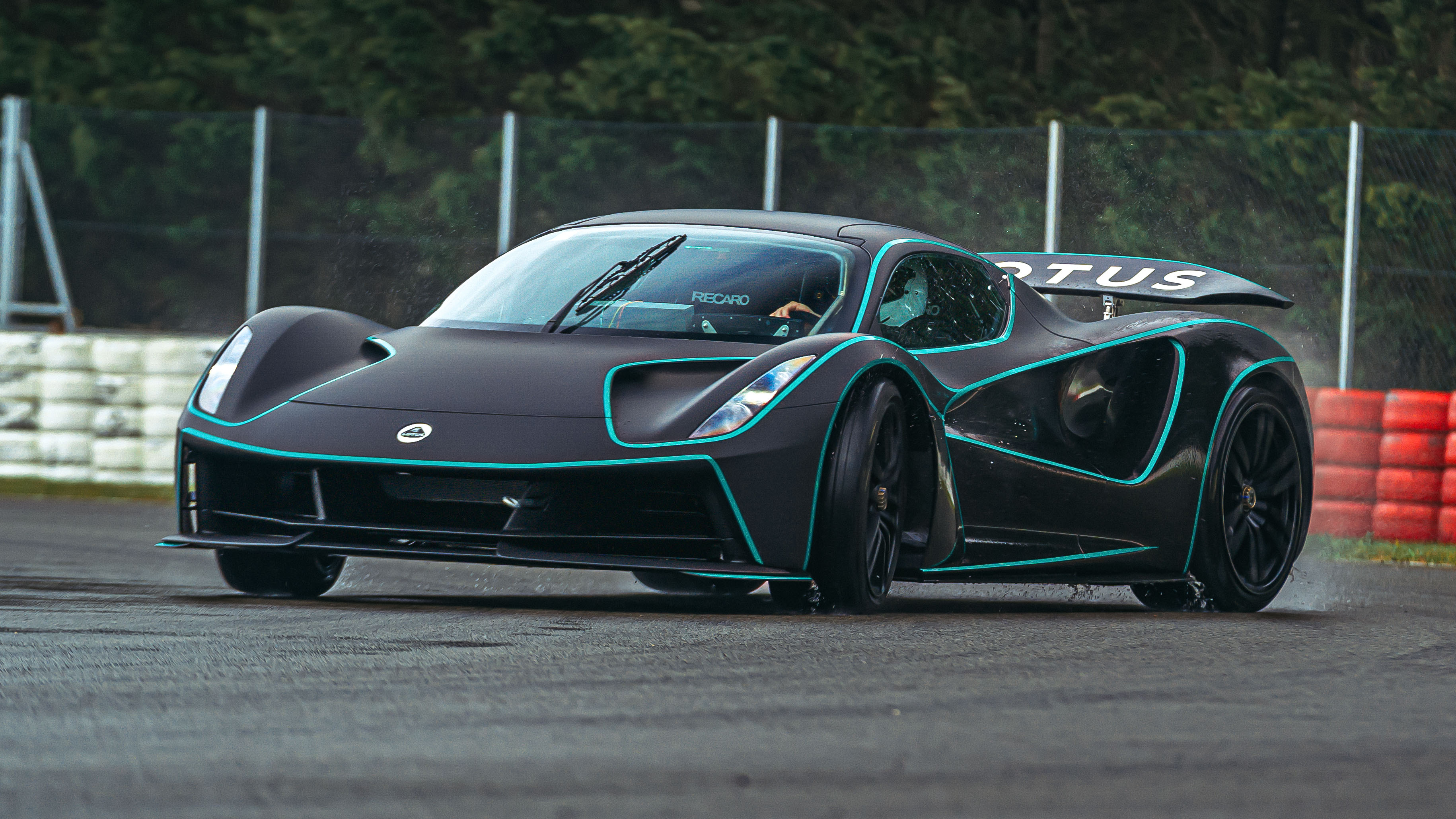 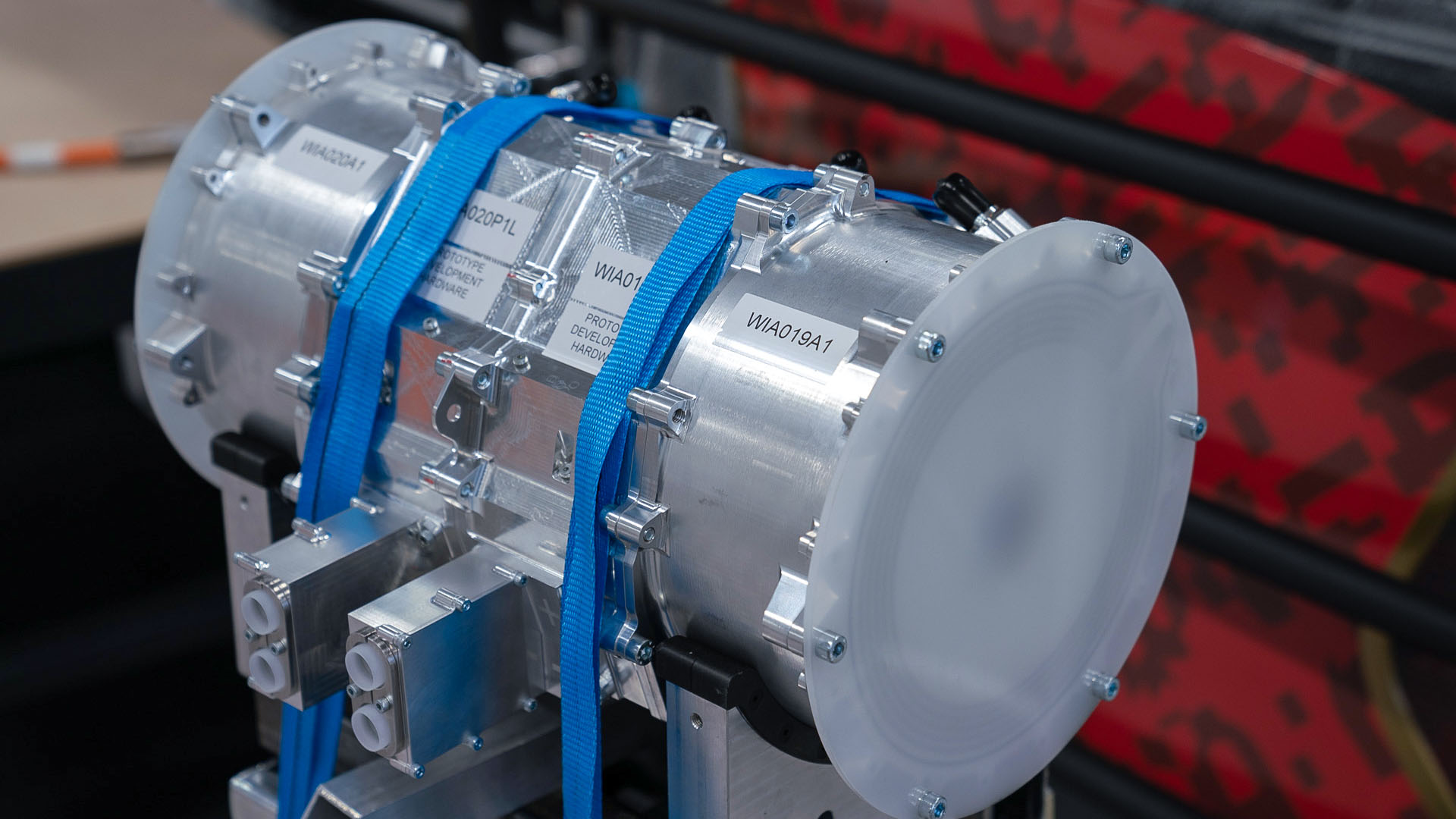 You’re telling me. Lotus’ Hethel test track, the first person in the world to experience the Evija from behind the wheel and half the workforce is watching from the pit wall… including the new boss Matt Windle. It’s an honour but also a responsibility, and the Evija’s raw numbers weigh heavy on the mind.

So not the finished car then?

Far from it… in appearance at least. The interior is a mass of metal and exposed wires, the body panels are tatty and wrapped in a Tron-style livery of Top Gear’s own design (an idea linked to the glow-in-the-dark cover on the latest Electric Awards issue of the magazine) and this is a passive prototype – no active aero, no traction control, no ESC, no torque-vectoring, basic ABS – but still with 80 per cent of its full performance uncorked. Which may explain one particular ‘moment’.

It started with a fizz, the unmistakeable sound of rear tyres spinning up, progressed to an angle not entirely parallel with the straight piece of track I was supposed to be launching down, and almost ended in a ball of fire. But somehow I reacted, the car righted itself and I snapped out of slo-mo mode pointing in the right direction. In hindsight, doing a standing launch on a wet track on Trofeo Rs probably wasn’t the best idea, but that’s the thing about the Lotus Evija, its unfathomable performance is so accessible and exploitable that it lulls you into a false sense of security. That’s my excuse anyway, and I’m sticking to it.

And when you’re not having near-death experiences, what’s it like to drive?

What you feel right away is that low centre of gravity, officially lower than an Evora, but unlike a skateboard chassis with the mass spread out towards all four corners, the Evija really wants to rotate, to change direction on a pin head – a big benefit of concentrating all that mass in the middle of the car. “We liken it to someone in an office chair. Put their arms and legs out and try to rotate them, it takes a lot of effort,” Gavin Kershaw, the man responsible for making all Lotuses handle like Lotuses, explains. “Get them to curl up into a ball and you can flick them from side to side.”

Unlike the flat skateboard battery you’ll find in most mainstream EVs these days, or even the T-shaped pack in the Rimac C_Two and Pininfarina Battista, all the cells sit behind you in a pyramid-shaped pile. “We wanted the cockpit-forward feel of a Group C racer,” says Kershaw. “Plus you couldn’t sit this low, and the roof would have been 200mm higher.”

How big is the battery?

Engineers settled on a 718kg, 69kWh lump – less than a long-range VW ID.3, way behind the Rimac’s 120kWh pack and way, way behind the 200kWh slab Elon wants to put in the Tesla Roadster. A trade-off between being the lightest car in its class (1,680kg in its lightest spec, about the same as a new 911 Turbo), delivering a useable WLTP range of 215 miles and making sure you can get some decent lap times in. Kershaw reckons about 15 laps or 30 miles flat out, before it's time for a charge. “Don’t forget this is a car that can do 0-186mph in under nine seconds and accelerate at over 1G for all of that, you’d need to be an F1 driver to cope with any more track time than that,” he points out.

Even when it’s stationary, it’s lightning fast: “We can charge up to 500kW, although it’s not readily available at the moment,” that’s Louis Kerr, chief Evija platform engineer. “We can do 350kW easily, that takes about 12 mins. With 500kW we’ll do it in sub nine minutes, for a full charge.” The cooling is purposefully overkill, too: “We have a lot of radiators, we’re over-cooled in road conditions so you can push it on track and won’t have any loss in power.”

Yea yea, but is does it actually feel… like a Lotus?

I honestly didn’t think it was possible, but it’s there, from the first corner, the DNA. It’s crude in here, no trim whatsoever, but that helps me to concentrate on what’s important. The steering is superb – light and darty around the dead-ahead, then loading up according to wheel angle and speed. The brakes, Brembo’s top-shelf carbon-ceramics, baked to perfection for no less than nine months, deliver the goods too; loads of feel, easy to modulate and enough bite to shed the silly numbers I’m accruing so effortlessly. For the less aggressive driving modes (there will be five, on a manettino-style dial on the steering wheel – Range, City, Tour, Sport and Track), most retardation will be regen, bleeding into physical friction when you need it, but on track you’ll be in full control of pad on disc.

But it’s the way this thing moves that’s just staggering. There’s so much less inertia than I thought there would be, it doesn’t feel cumbersome, it’s light on its feet, playful and with the instant smash of acceleration a naturally aspirated engine could only fantasise about. I have to keep reminding myself this is far from finished because the handling balance is already so polished. There’s a little body roll, which is welcome, but also a satisfying balance in the chassis, like its working all four tyres evenly.

There’s joy in simply controlling and managing the mass, feeling my way around the track, it’s miles from the point and squirt device I assumed it would be. And there’s still ESC, trick traction control with a hero sideways mode, four-wheel torque vectoring… and another 400bhp (400bhp!) to come. Right now, the torque split is locked at 25 front, 75 rear, which would explain its penchant for oversteer if you tickle the throttle a hair early in the corners, but mainly it just grips and rips, despite fairly modest 265-width front tyres.

OK, can you describe what launching it feels like?

Pin it from standing in the dry (no need for clever software, just mash the throttle, an idiot could do it) and it’s not so much the initial force that surprises you - Teslas and Taycans have conditioned us to that now – but the way that, with no gearchanges, it just keeps coming, a wall of unrelenting shove. In fact, it actually ramps up, accelerating harder the faster you go, feeding in the hit of the whole fruit as and when the tyres can handle it until you're staring, wide-eyed at some enormous number on the dash in front of you and wondering how on earth you got there.

And it’s all so easy. Even a twin-clutch gearbox requires some management, some knowledge of when to shift, at what rpm the engine comes off the boil, but this is just a two-pedal go-kart, albeit one with a sizeable rocket up its bum. The noise? A shrill wail that intensifies exponentially - a good fit for the driving experience to be fair - that’ll be dampened down once they fit some sound deadening, pump something synthetic through the speakers and add an actual interior.

How does the Evija fit into the Lotus masterplan, then?

This isn’t just a halo car for Lotus, it’s a flagbearer for really fast electric cars as a whole. If Lotus can make this one stick then the supercar’s future is all but secure. It’ll also get the next phase of Lotus’ rejuvenation under the Geely umbrella off to the best possible start, and the new boss, Matt Windle’s, plans are punchy: the new combustion-engined, Evija-inspired Emira sports car is revealed in July. Built in a brand-new production facility (£100m has been invested in the Hethel site in just the last 18 months) Windle wants to take production from the current 1,500 cars a year to 5,000, and there’s capacity to make more if there’s demand.

Beyond Emira, which will stick around “into the late Twenties", says Windle, Lotus will become a pure-electric car maker. Work is already underway on a lightweight electric sports car platform – a joint venture with Alpine, and a Chinese-built electric SUV waits in the wings. The Evija isn’t just a one-off to demonstrate Lotus technical ability, then, it’s a signpost for the entire future of the company.