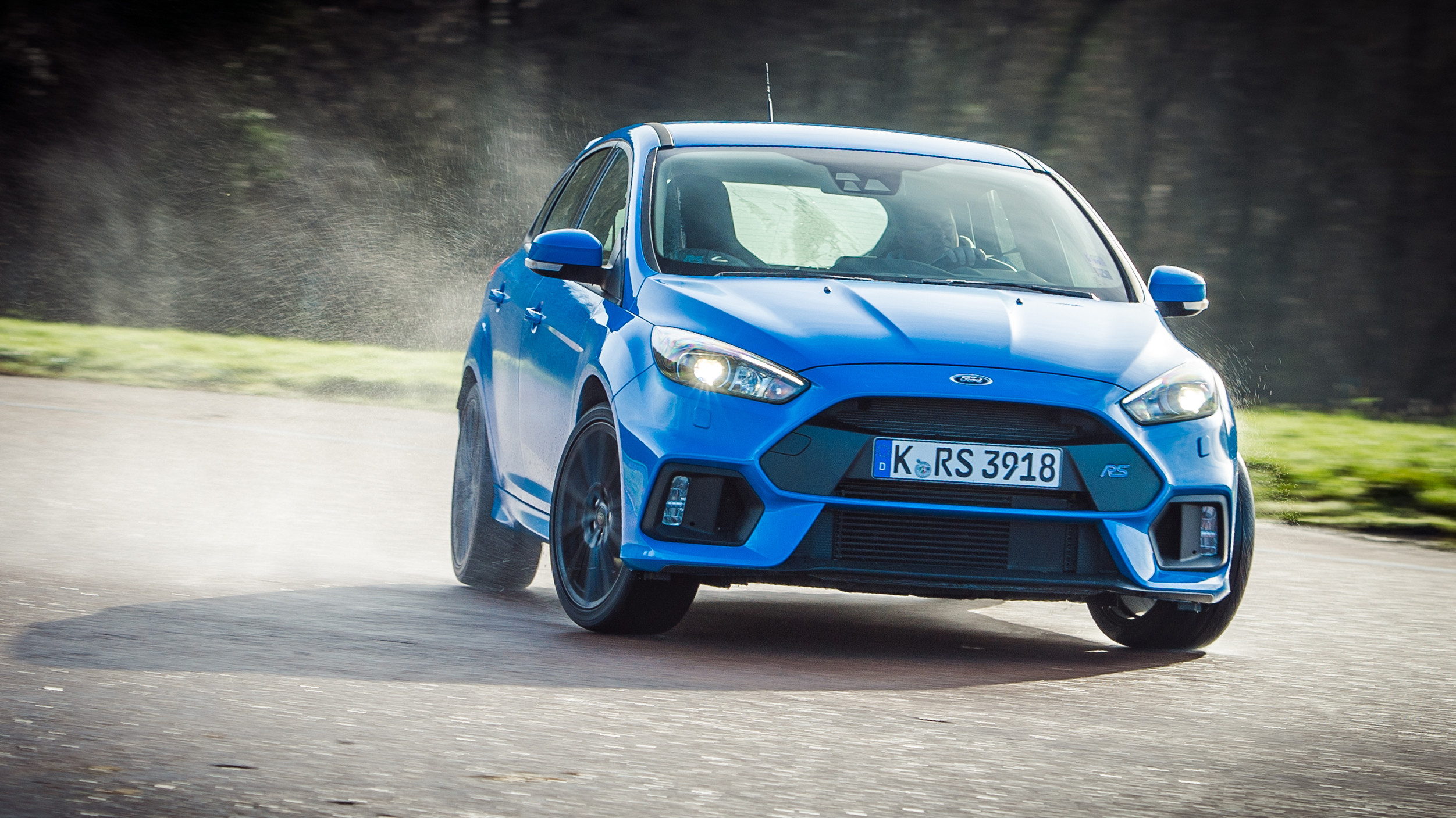 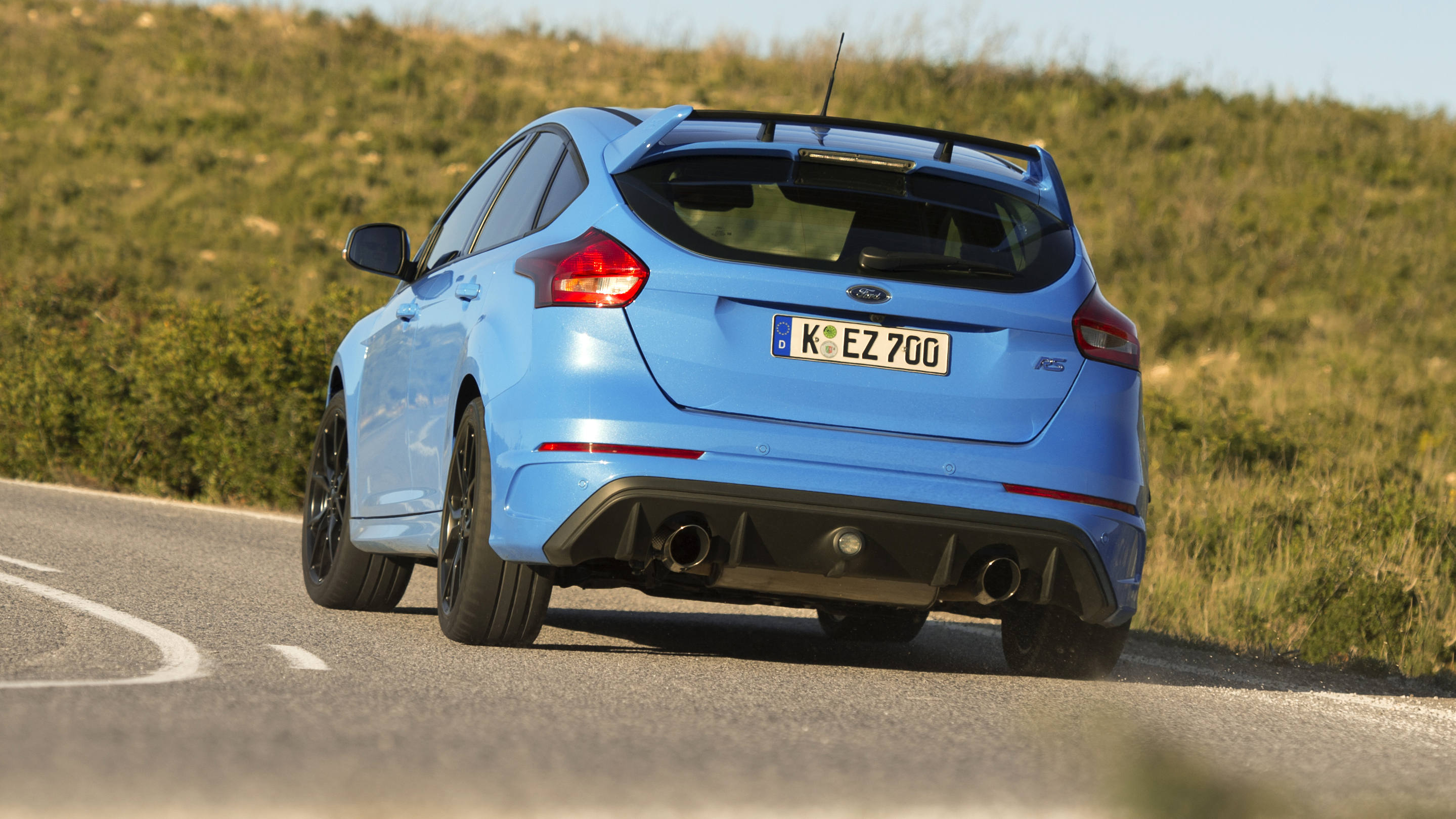 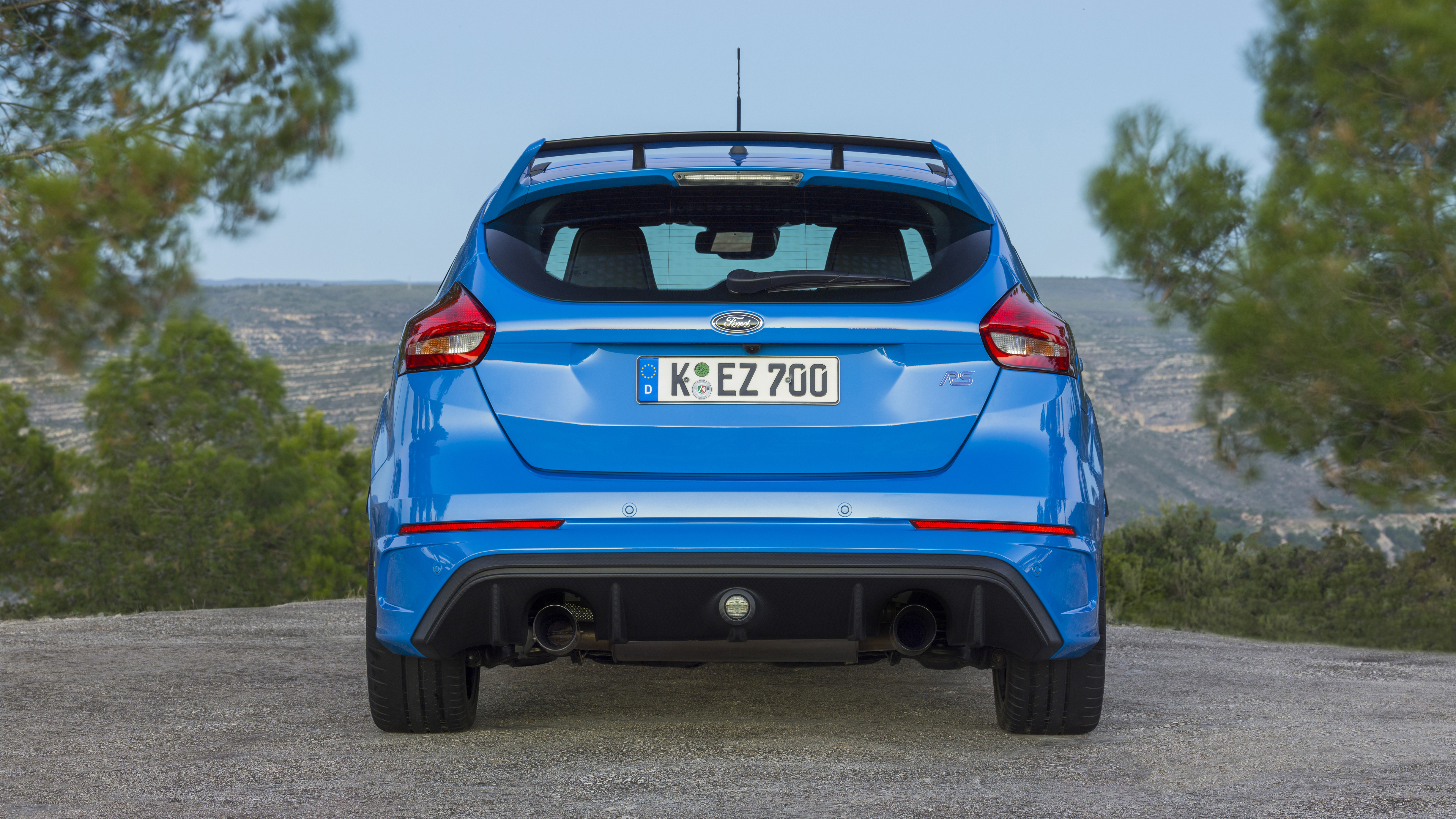 Nice try. Unless you’ve been living under a rock for the last 12 months, you’ll be well aware of what we have here – the hype surrounding the new Focus RS has been borderline hysterical. So, thanks to viral videos of Ken Block spanking it sideways around various proving grounds and a carefully metred trickle of information from the Ford PR machine, the thirst for this car is strong.

For the benefit of any troglodytes out there, this is the latest in a line of fast Fords to carry the RS (Rallye-Sport) badge – an acronym reserved for a rare breed designed to bring mega performance to people of normal means. How does 345bhp from a freer-breathing version of the Mustang’s EcoBoost engine, hooked up to a trick torque-vectoring four-wheel drive system, sound? And all for an ultra-lean price of £29,995.

Bargainous. Now tell me more about the tech.

Gone is the thirsty five-pot turbo of old, replaced with a 2.3-litre four-cylinder direct-injection turbocharged engine producing 345bhp and 325 lb ft of torque. Your only gearbox option is a six-speed manual, which we’re delighted about, plus there’s launch control, adaptive dampers and many modes to play with.

‘Normal’ does what it says on the tin, while ‘Sport’ sharpens the throttle response, adds weight to the steering and opens flaps in the exhaust for anti-lag style detonations whenever you lift off. ‘Track’ does all of the above, but tweaks the four-wheel drive system and slackens the ESC to improve your lap times, and then there’s ‘Drift’ - something never seen before on a hot-hatch. Something with the potential to make heroes of us all.

Yep, given the space and sufficient commitment from your right foot. It all starts with a revolutionary four-wheel drive system, developed by a company called GKN. It uses a pair of electronically-controlled clutch packs either side of a rear drive unit to manage the front/rear torque split – sending up to 70 per cent to the back  - and channeling up to 100 per cent of that rear torque to the left or right wheel. By comparison, the Golf R’s Haldex system can only send 50 per cent of the torque to the rear and distributes it by braking the inside discs.

In drift mode it forces maximum grunt to the rear, but softens off the dampers to allow more movement, unlocking enormously-satisfying and controllable power oversteer. The system constantly monitors you, too, so if it senses you’re not applying lock quickly enough for the speed of rotation at the rear, the ESC will step in. If you are, then it lets the drift angle increase. Alternatively you can switch everything off, take a deep breath and leave the judgement up to your eyes and feet.

It’s a magical sensation, because unlike powerful rear-wheel drive cars, where the rear has a penchant for overtaking the front, the RS’ front tyres aren’t merely a static rotation point, they use that 30 per cent of torque to keep things moving forward, letting you hang the tail out, fear-free.

Do I have to drive everywhere in a cloud of smoke?

Nope. In ‘Sport’ or ‘Track’ it adopts a far more neutral mid-corner stance and makes the most of the traction. You can feel the outside rear wheel receiving its torque delivery and driving you through the corners, too, while the front axle is tucked in with dabs of brake to the inside wheel. It takes some recalibration of your brain because whereas hot-hatches normally require trail-braking or sudden lifts of the throttle to eradicate understeer, the RS tightens its line the more throttle you apply.

And then, when you’re not revelling in the metallic warble of the engine as it spins towards the 6,800rpm limiter, or leaning on the high biting point and textured feel of the brake pedal, it settles down perfectly to become as quiet and refined as any fleet-special Focus that lines the highways and byways of the UK. ‘Track’ mode is best left for, erm, track work because there’s a big step between the softer and firmer damper settings, but isn’t that how it should be? Dual characters, depending on the road in front of you.

So how quick is this thing?

Fast, seriously fast in fact, but not quite a ballistic missile like Merc's A45 AMG. Ford quotes 0-62mph in 4.7 seconds and a top speed of 165mph, which is plenty quick enough, but in reality it doesn’t feel any more rapid than a Civic Type R in a straight line, despite a 40bhp and four-wheel drive advantage. However, whereas the Honda’s torque arrives suddenly, riding a tidal wave of boost, the Focus’ 325lb ft of torque (347lb ft on overboost for 15 seconds) hits quicker, earlier and for longer. The only thing that delays the onslaught is having to use a human foot and hand to change gear manually.

But we wouldn’t have it any other way. A twin-clutch auto would make the RS faster still, but the manual ‘box is just so much more engaging, which is why the engineers plumped for it. There’s a fraction more body roll than you get with a Type R or A45, too, but it helps the steering to load up beautifully in longer arcs, and makes the whole experience feel that much more alive.

Not quite, there are some issues. Our test car was fitted with the optional fixed-height bucket seats and immediately they feel too high, so you’re perched rather than sunken down into the belly of the machine. Ford says it’s already working on a fix, so watch this space. Then there’s the interior: the seats look great and are soft in all the right places, the bank of boost gauges is a nice touch, but beyond that it’s all a bit too boggo for our liking. Same goes for the exterior: the front-end, wing and exhausts are neatly executed, but where are the gratuitous vents and the flared arches? The strategy is clear, to widen its appeal (it’s a global car after all) but it’s definitely lost some of its inner Essex boy along the way.

But here’s the rub. After just a few hours playing with the RS’ hilariously approachable limits and using all of its performance more often than you’d think, those problems just fade to black. You’re left astonished by the way it ticks the same boxes as its competitors, then offers another dimension entirely. It’s a game-changer, this car. Really, it’s that good.