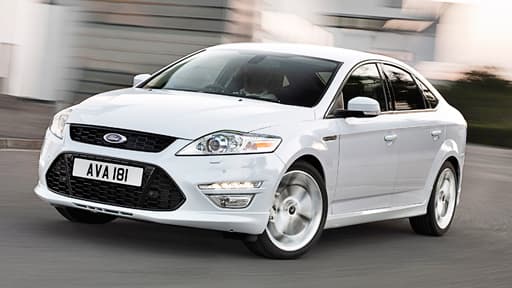 Obvious exotica aside, it's a rare car that causes consensus in the Top Gear office. And while Bill Thomas did his valiant best to introduce a worthy contender to king of the large repmobile class with his panegyric to the Mazda6, the Ford Mondeo has occupied that throne here for the best part of a decade.

It's not just a journalist's darling, the Mondeo. The Ford now accounts for one in four new large company car purchases, big enough numbers to give its owners their own sociological class. And while Mondeo Man has become shorthand for "dull man with dull job", at least he's always been able to append "who drives a great car" onto that. When compared to, say, BMW drivers, it beats "cock" by a few furlongs.

The reasons for the Mondeo's dominance are well-documented: high-speed comfort, refinement beyond price bracket, genuinely fun drive. For this facelift, Ford has had the sense not to mess with their formula.

The biggest news is two new engines. The range-topping petrol is now a tweaked version of the existing 2.0 litre EcoBoost petrol from the new S-Max and Galaxy, offering 236bhp to the previous 197bhp, while still claiming 47mpg. The top-end diesel, as fitted to our test car, is an impressive new 2.2 Duratorq TDCi, at 197bhp/47mpg. The 2.0 petrol and diesel remain from the current range, while Ford also plan to offer the 1.6 EcoBoost petrol from the new C-Max which so impressed Top Gear last month.

Outside, the latest Kinetic design upgrade is subtle to the point of anonymous: LED lamps ring wider trapezoid lights front and back, chrome circles the windows, the Aston-style side-blades are more pronounced.

Inside too, all remains well. Our test route is a perfect example of this car's typical day, a 500km A-road schlep from Paris to Alsace, and once underway you remember what a nice place to be this is. Closeted from road noise, Ford's traditional meaty steering between the hands, and with enough poke from the big diesel to despatch Romanian HGVs at all speeds, you're left to concentrate on subtleties. The satisfying click of the air vents as they rotate. The "EcoBoost" quiz buried in the menus which mark you for your driving (we were rather pleased with five petals out of five for ‘anticipation'). On the downside, the new dash display - stuffed between analogue dials for revs and speed - is cluttered and difficult to read, and we couldn't get the iPod connection to work.

But we're being picky. Life hasn't been easy for poor old Mondeo Man in the last few years. At least while he laments his plummeting pension down the 19th hole, he can rest assured he's still driving a genuinely excellent car.