£32,295 when new
Read why you can trust our independent reviews 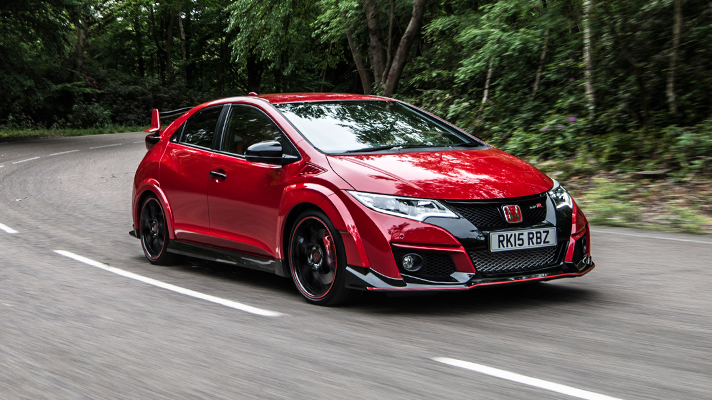 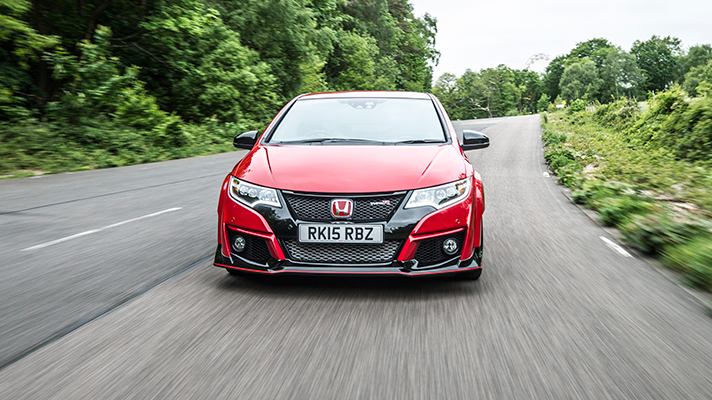 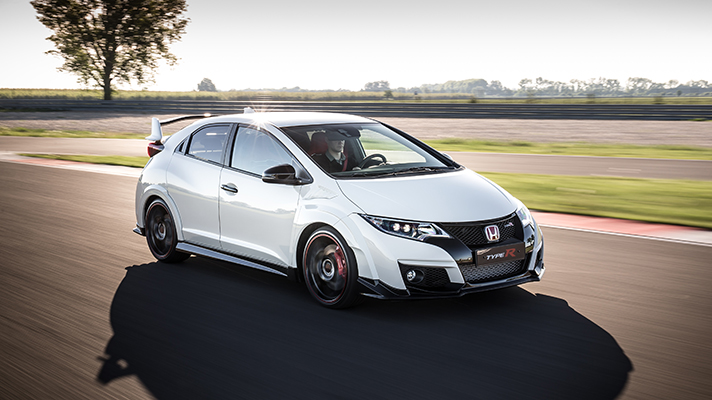 Revs to the skies? Really?

OK, no, that's where things fall a bit short. 7,000rpm is your limit in this new turbocharged motor, but it does make a real song and dance about getting there, dash lights blazing, second and third consumed in a blaze of force and urgency.

As good as the old naturally aspirated VTECs?

We'll come on to that. First let's consider what Honda has done to turn the standard Civic into the Type R.

As you'd expect from a company with Honda's reputation for engineering integrity, it's a fairly comprehensive list that starts with the bodyshell itself. Rigidity has been increased by 18 per cent, not by adding extra steel, but by changing the bracket designs and using the adhesive more cleverly.

It's very rare to find a company prepared to go to such lengths to turn a regular hatch into a hot hatch - this really is starting at square one and rebuilding.

What about the suspension?

Remember a few years back when the fashionable term in hot hatchdom was ‘reduced kingpin offset'? I know, exciting times. Anyway, the Ford Focus RS, Astra VXR and Megane all had trick front suspension systems designed to reduce torque steer by minimising the camber change on the front wheels during cornering - necessary when trying to put the thick end of 300bhp through the front wheels.

Vauxhall called it HiPerStrut, Ford Revoknuckle and Renault PerfoHub. Well, now it's Honda's turn to shout about its new Dual Axis Strut Front Suspension. DASFS. Catchy. The main claim is appealing though: torque steer is claimed to be reduced by 55 per cent.

News: this is the new Honda NSX

The lower arms, damper forks and bushes have also been re-engineered, although at the back Honda has stuck with a torsion beam set-up. The promise is good - the new design for the Type-R is so stiff (up 177 per cent on the standard car) that there's no need for a rear anti-roll bar.

Now can we talk about the engine?

We can. It's an all-new 2.0-litre four cylinder direct injection VTEC Turbo. This is relatively standard fare, and mighty though the power outputs are (306 bhp at 6500rpm and 295lb ft at 2500rpm) they're not outrageous these days. The Golf R is only 10bhp down.

What is slightly unusual is that while most opt for variable vane turbo geometry to control boost across the rev range, Honda uses a monoscroll unit and depends on its VTEC valve control to manage things. It also electronically controls the wastegate.

Gallery: ten of the most powerful hot hatches

However, if you were expecting Honda's engineering nous to have eradicated all lag, you're in for a disappointment. At low engine speeds there's quite a bit of it and it's not until past 3,000rpm that it really hits its stride. It's better at picking up quickly at high revs, and once away and blowing hard the Civic is massively fast. Massively.

Would I trade this flexibility and power against the noise and sharpness of the old car? Tough one. Yep, I probably would.

It weighs a claimed 1378kg, which gives it a power to weight ratio of 222bhp per tonne, ten per cent better than a Golf R. It consumes those tightly stacked lower gears, every gearchange in the new six speed manual a total delight. So precise, so tight, so slick.

If everybody had a manual gearbox like this there'd be no call for double clutch gearboxes.

Does it sound good?

The Civic Type R makes noise. Quite a bit of noise, and it goads you on, but it's not tuneful, not nice to listen to. Instead you get the feeling that the car's only intent is to get to the next gear as soon as possible, and that it views sounding good as superfluous small talk.

It's a shame, because you get a bit of exhaust woofle on start-up, and on light throttle openings around town the turbo wastegate chatters audibly.

And how is it at doing normal stuff?

It's not a Golf R. The Type R doesn't have that calmness about it. But you know what? Apart from excessive tyre roar on coarse surfaces, it's fine on motorways and the boot is huge. Back seats, too - although the seat bases don't do the clever cinema flip-up thing on the Type-R.

There's plenty of headroom, and the view out the back is surprisingly good, entirely unimpeded (unsurprisingly) by that lofty wing. We averaged 27.8mpg over the course of 450 mixed miles. And the ride is satisfying.

Well, I wouldn't call it comfortable, but it's tremendously well controlled and you get the feeling it's underpinned by expensive dampers. The Civic is firm over speed bumps and potholes, but rounds off the edges really well. Considering the tyres are 235/35 ZR19s (Conti CSC6s, rubber fans), that's a good effort. It never feels less than purposefully sporty, though. In fact the whole car is shot through with a motorsport vibe that starts with the cabin.

The trouble is the rest of the two-tier dash - as your view of the instruments is split by the rim, you're very limited in where you can position the steering wheel. It's a problem exacerbated by the fact that, although dropped by 30mm over the standard hatch, the seat is still mounted too high.

Enough to affect the driving experience?

Not for me - just one of those things you get used to. And the driving experience is pretty compelling.

The best way to describe it is that the Civic isn't one of those playful hatches, like the Focus ST or Mini Cooper S. No, the new Type-R is serious about speed. And it's very good at it - not just at achieving it with the engine, but maintaining it through corners.

Two things strike you immediately - how low the centre of gravity seems, and how stiff the shell is. We took our long term VW Golf R along as a comparison, and, for the first time, detected within it a tiny bit of structural shimmy on difficult Welsh roads, which I don't think I'd have noticed if the Civic hadn't been so tight.

Combine this tautness with the controlled damping and a pukka mechanical LSD, and you have a very effective cross country device. OK, it might not sound the best, and the messages coming back through the steering don't quite have the Golf's clarity, but it's a very absorbing, all-consuming car to drive. Where the Golf is ‘I'm game if you are', the Civic is more ‘come on, keep up, let's see what you've got...'

Oh yes. The Type R charges about the place in a very determined manner. You find yourself using high revs because that's where the engine is happiest, while the four piston vented and cross-drilled 350mm front Brembos are mighty (although the rear discs are weenie and flimsy-looking in comparison) and the diff is deliriously effective.

It doesn't do a bad impression of a touring car or tarmac rally car to be honest, but to get the best out of it you have to take it by the scruff and concentrate.

Ideally, an ability to left-foot brake is preferable, allowing you to build up boost pressure on the throttle and release the brakes at the apex for a suitably rapid, lag-free corner exit. Yep, all a bit track-day-enthusiast, but that's what the Civic is like, and you'll get more out of it if you do.

Still, it's not an edgy handler. All the work is done by the front axle - the rear simply follows along safely and predictably. There's nothing wrong with that, but it doesn't quite have the Golf's mid-corner adjustability.

Traction though... well, I swear the Civic is as quick out of corners as the 4WD Golf R. It's immense. Which leads me on to +R.

What the heck is +R?

A button on the dash that makes the instrument rings glow red instead of white. It also loosens the ESC shackles, implements a more aggressive torque map, reduces assistance to the electric power steering and firms up the magnetorheological dampers.

Yep, the same adaptive damping tech as used in the Audi R8, Ferrari 458 and Corvette Stingray. It's the best system out there, and in the Civic firms the dampers up by 30 per cent.

The only issue is that, while the other +R changes are useful, you neither need nor want the stiffer dampers unless you're on millpond tarmac. But you can't amend the settings individually: the choice, frustratingly, is either to +R or to not +R.

Ah yes, the thorny issue of the way the Civic looks. It's not understated is it? Nor, depending on your viewpoint, tasteful.

I like the wheels, but the bolt-on panels overpower them to such an extent that the 19s don't fill the arches. And the slats on the bonnet and behind the front wheels are just daft. Honda swears blind these serve a purpose, venting air, but on closer scrutiny they appear to be filled in with plastic inserts.

Honda says there are tiny holes in the plastic. We say, if they serve a purpose why make them look like they don't? And wouldn't they be more effective if the holes were less tiny? Honda has a reputation for engineering integrity, and silly slips like these undo decades of good work.

Similarly, Honda claims the Civic produces active downforce at speed, but wasn't willing to share how much it does produce. Look, the Type R doesn't need this. It's a very good car, but the styling is too childish for a hatch that's not affordable by the people it most likely appeals to. Maybe you see it differently, and that's fine.

Most buyers in the UK (it goes on sale here in July) will and it looks good value adding auto lights and wipers, parking sensors, dual zone climate, Honda Connect infotainment with premium 320w audio and Garmin nav. Honda is also offering PCP deals at £299 per month with an initial £10,000 down.

Now, what about that Nurburgring lap time?

A pre-production development Type R went round the Nordschliefe in 7m50.63s. If Honda can repeat that in a production car it'll be the fastest hatch of all. And, yep, I do totally buy that. It's hugely fast.

What's the verdict, then?

I have reservations over the Civic Type R's image and appearance, and Honda's taken an unashamedly hardcore tack with it. But it's genuinely exciting to drive, massively fast and relaxes far better than the bodywork suggests.

It's very different to a Golf R, but effectively carves its own niche in the hot hatch class - there's nothing else quite like it except the Megane, and I'd have it over the Renault. I think. Anyway, the more I drove it the more I liked it. I ended up liking it a lot.