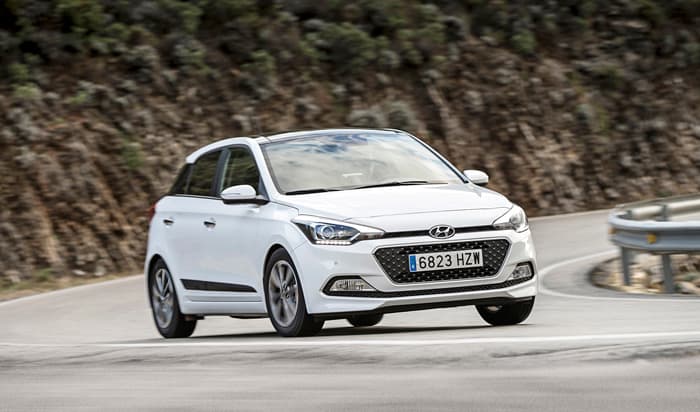 The turnaround of Hyundai's image isn't news any more, but it's worth referencing as the all-new i20 lands. Here's a car that no longer prioritises value above all, instead aiming for a plethora of talents and a feeling of maturity. It's going for the Polo.

You can surmise as much from the cabin. The materials are pleasant, ergonomics close to spot-on. It won't excite, but it's grown-up and simple to use, and in that regard it gets much closer to VW Group standards than either Corsa or Fiesta.

Further confirmation comes from Hyundai's chief designer, Thomas Bürkle. "We wanted to make a small car that's quality, and chosen by those who don't want a big car, not those who can't afford one."

The second-generation i20 has been designed in Europe; it couldn't look much more different from its predecessor, top-heavy tallness replaced by a sleeker profile. There is plenty of influence from European rivals - some of it flagrant, arguably - but it looks smart. Five-door only to begin with,a coupe-like 3dr launches in early 2015.

It lands with three naturally aspirated petrol and two turbodiesel engines, with 85 per cent of i20s expected to sell with petrol power. The 99bhp 1.4-litre is the one to have, as it's the most potent, but, in truth, they're all a little uninspiring and needrevs to unleash their tame performance.

Superminis without a fashionably dinky turbo petrol engine feel a little wheezy nowadays. Happily, a 1.0 three-cylinder turbo - with 100bhp and 120bhp tunes - comes in 2015, and our hunch is it will make itself the pick of the range.

Of the diesels, a 75bhp 1.1-litre is most interesting. Not for its performance (0-62mph takes 16 seconds), but its claimed 88.3mpg and 84g/km CO2. It's remarkably civilised once you're eventually up to speed, and it cruises well. It's punchy through town, too, if you can tolerate its narrow powerband and aren't immune to frequent gearchanges. Inevitably, it's rather rattly in congested traffic, though.

Dynamically, comfort is the priority, with the ride soft and the handling balance safe. It copes well through twistier bits, though - body control is well managed, and although the steering has an unsurprising lack of feel, it's satisfyingly weighted. It's far from a Fiesta for feistiness, but ease of use was the brief, and it's a brief the i20 nails.

As an all-round package, the i20 impresses. Equipment levels are strong, with parking sensors and lane departure warnings on an SE model that undercuts a comparable Polo by a grand. It's just a shame it lacks any fire in its belly. But then you can accuse a few Polos of that, too.