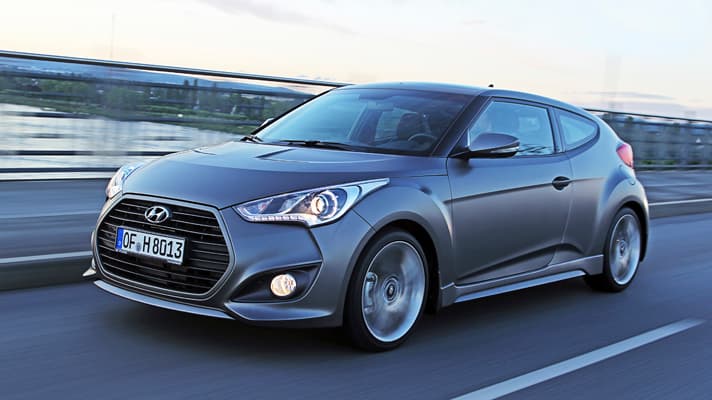 When the Hyundai Veloster was new, all everyone talked about was the doors. The strange and imaginative arrangement - two on the kerb side, one on the road side - raised the profile of both the Veloster and Hyundai as a whole. It also had the useful side effect of distracting attention from the car's relatively humdrum mechanical spec.

But now the Veloster comes with a turbo. So, however handy they might be for dropping the kids off at school, let's put the doors aside and look at it as budget sports coupe. The addition of a quick-responding twin-scroll blower to the direct-injection engine takes the power up to 186bhp and the torque to 195lb ft. To go with it, the wheels are up to 18-inchers, and the suspension is firmed, the steering re-geared and re-weighted, and brakes made more stout. What you'd expect.

It looks more businesslike too, especially given our tester had matt black paint. Generally, I'm of the view that this coating is a gimmick for attention-seeking individuals who wear sunglasses in
the dark. But, in the Veloster's case, I'll make an exception, because it sucks in the light and quells the sheet metal's slightly over-enthusiastic hollows and bumps.

The body kit for the turbo runs to a bigger single-grille mouth, spoiler and skirts around the base of the car, and, out back, a pair of centre-mount exhausts the size of storm drains sitting in a diffuser-like panel. The whole backside is as modest as a baboon's. So it looks like it wants to be serious. The engine is about as effective as the numbers suggest. The Veloster Turbo is slightly different from the one that's sold in America, where they have more power at high revs (201bhp) but less torque. Still, I suspect ours is the tune to have, because the engine sounds a bit gruff and cheerless at big rpm, so it's best to use the boost in the mid-ranges.

I was driving for a shortish time in a biblically wet Germany, so please don't take my view of the chassis as definitive. But the steering did strike me as more progressive than in the standard car, which it needed to be. I'm not sure they needed to stiffen the ride, though. Hyundai is claiming to have added sound-deadening to cut road noise (a real issue with the standard car in the UK), but we'll need more experience to check.

Hyundai has sold about 1,000 regular Velosters in the UK, so people are obviously up for its styling and three-door lay-out. The kit levels are strong too. But once you get to the Turbo level, I'd assume they care more about the dynamics. If that's the case, rivals provide red-hot temptation.