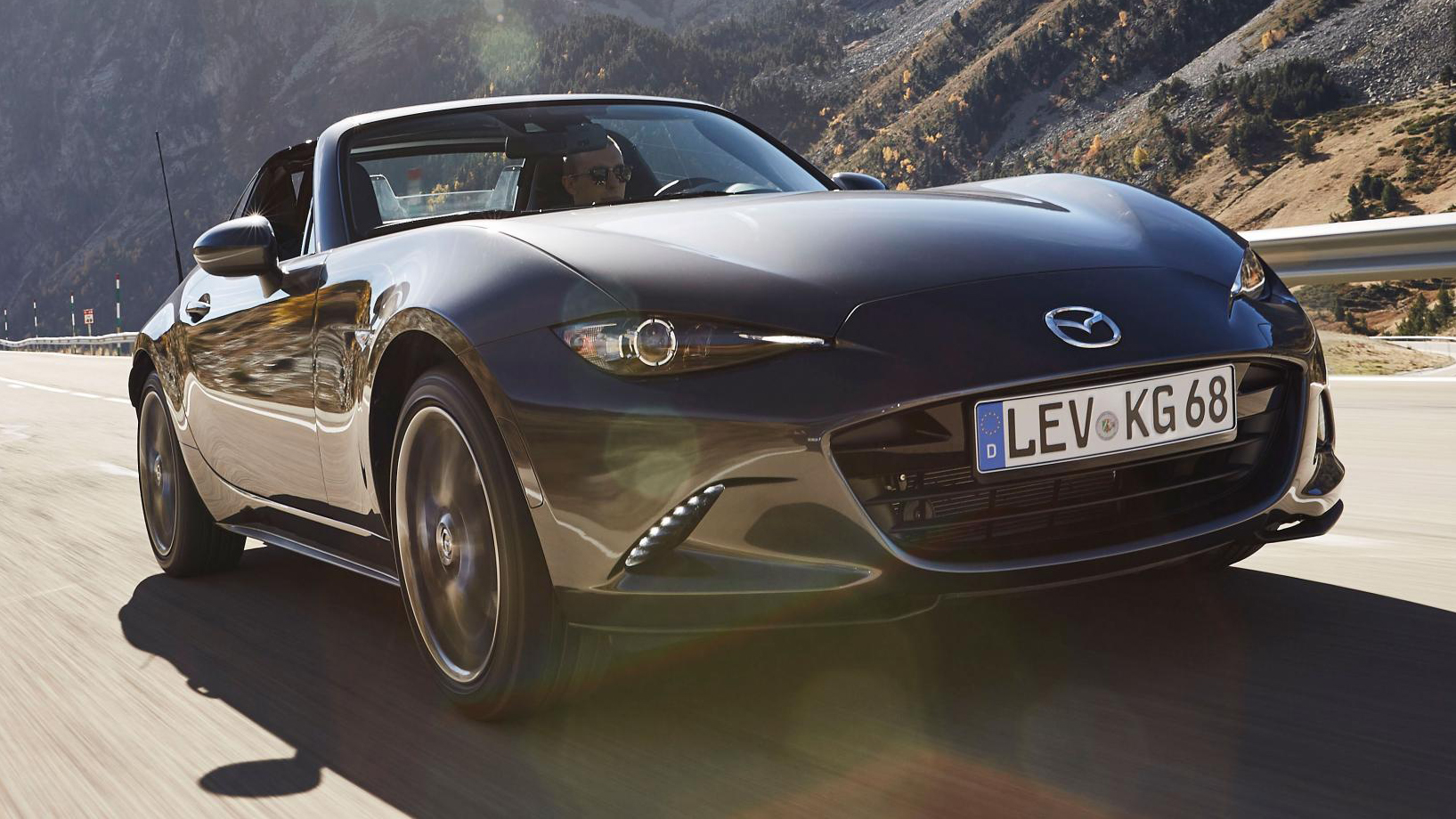 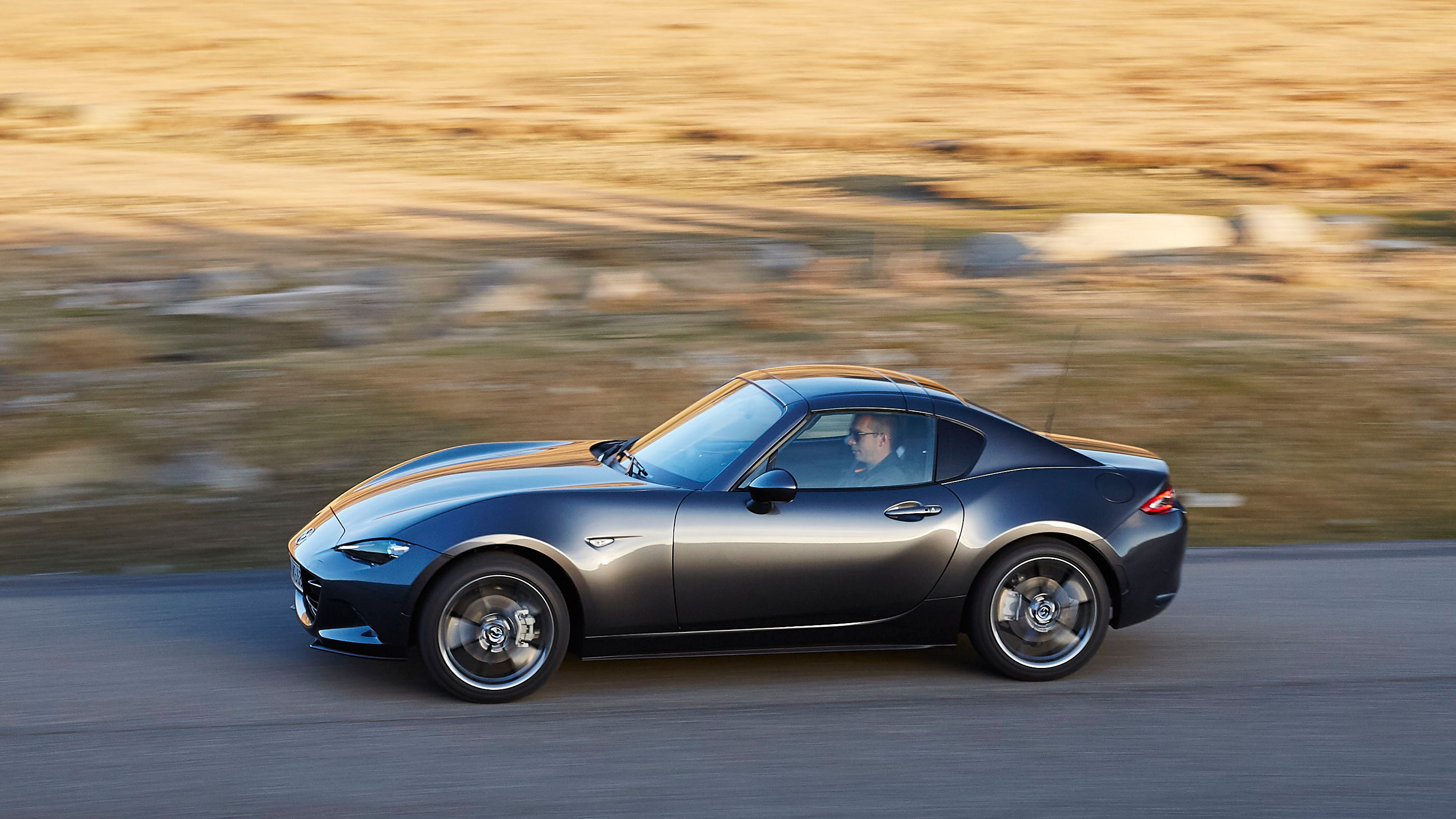 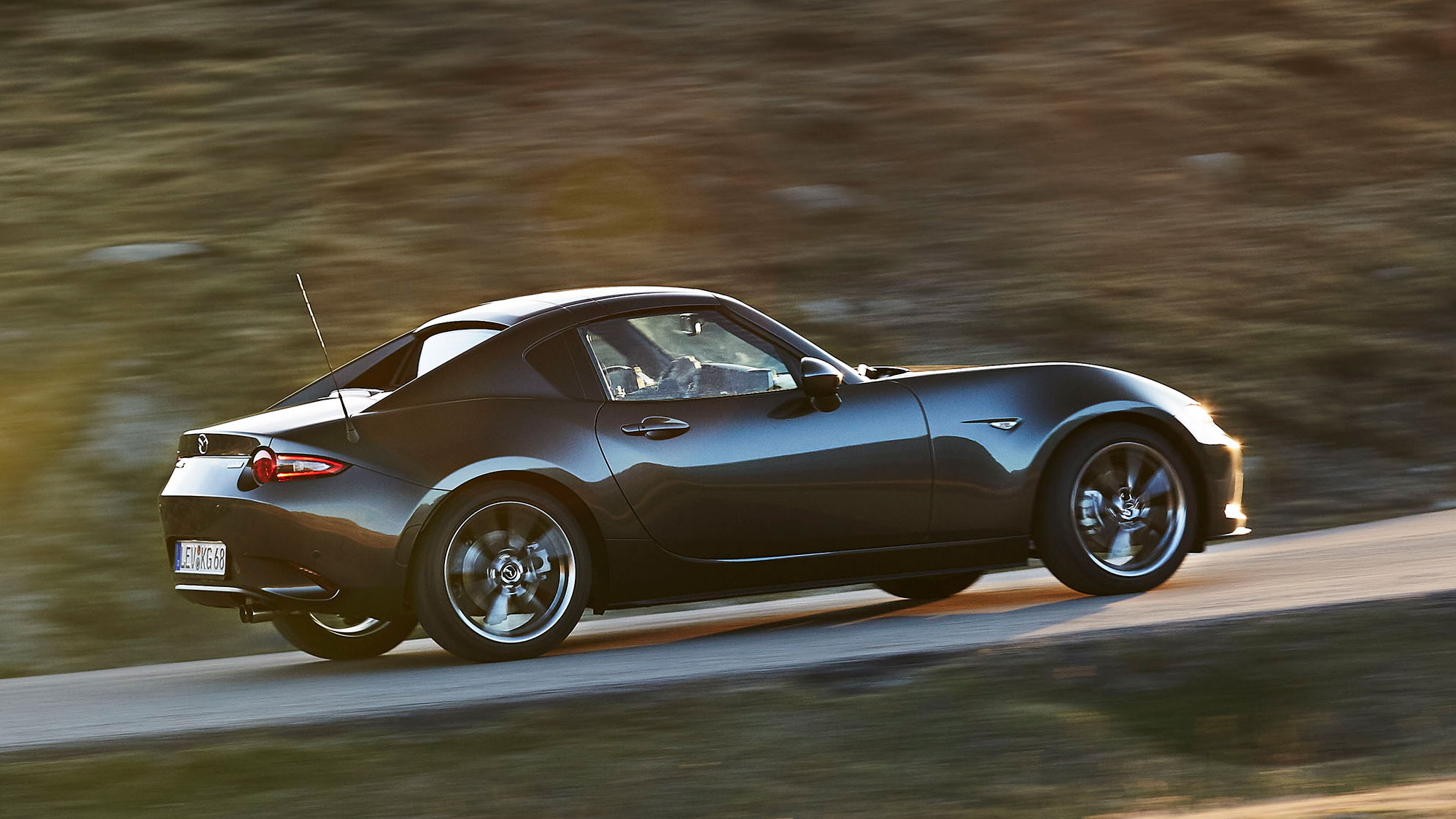 Buttresses? On a Mazda MX-5? What’s this?

This is the Mazda MX-5 RF, where RF stands for Retractable Fastback (its father, Yamamoto-san, freely admits this is a clumsy name and actually asked us for better alternatives – submit yours below), and the focus is very different from a regular MX-5, potentially.

The standard car we love, because it’s all about lightness. Basic ones weigh exactly one tonne, because of its hand-operated soft-top roof and hacked dimensions. With electronically motorised metal and glass origami on-board, you’d suspect this is an MX-5 with luxury ideas above its station. An MX-5 that’s forgotten where it came from.

Why have a folding hard-top, anyway?

Well, the phenomenon of vandals slashing soft-tops seems to have largely died out in Britain at least, now bored youths have Tinder, but it’s still a weight off your mind as an owner. In the main, a folding hard-top means quieter cruising – the soft-top car suffers badly with wind-noise even with the top up – and if you’re perhaps getting on in years and not as supple as you’d like, there’s no need to twist your torso to ‘click’ the roof into place here. It also looks a bit less dainty than the roadster. BMW Z4 Coupe anyone?

What’s the deal with the roof, then?

It’s a two-piece job with a letterbox rear window, made from aluminium, steel around the mechanism and plastic for the buttresses. Roof up or down, the rear buttresses remain, so unlike the old MX-5 RC, you can tell the Mazda MX-5 RF is the pricier one even when topless. 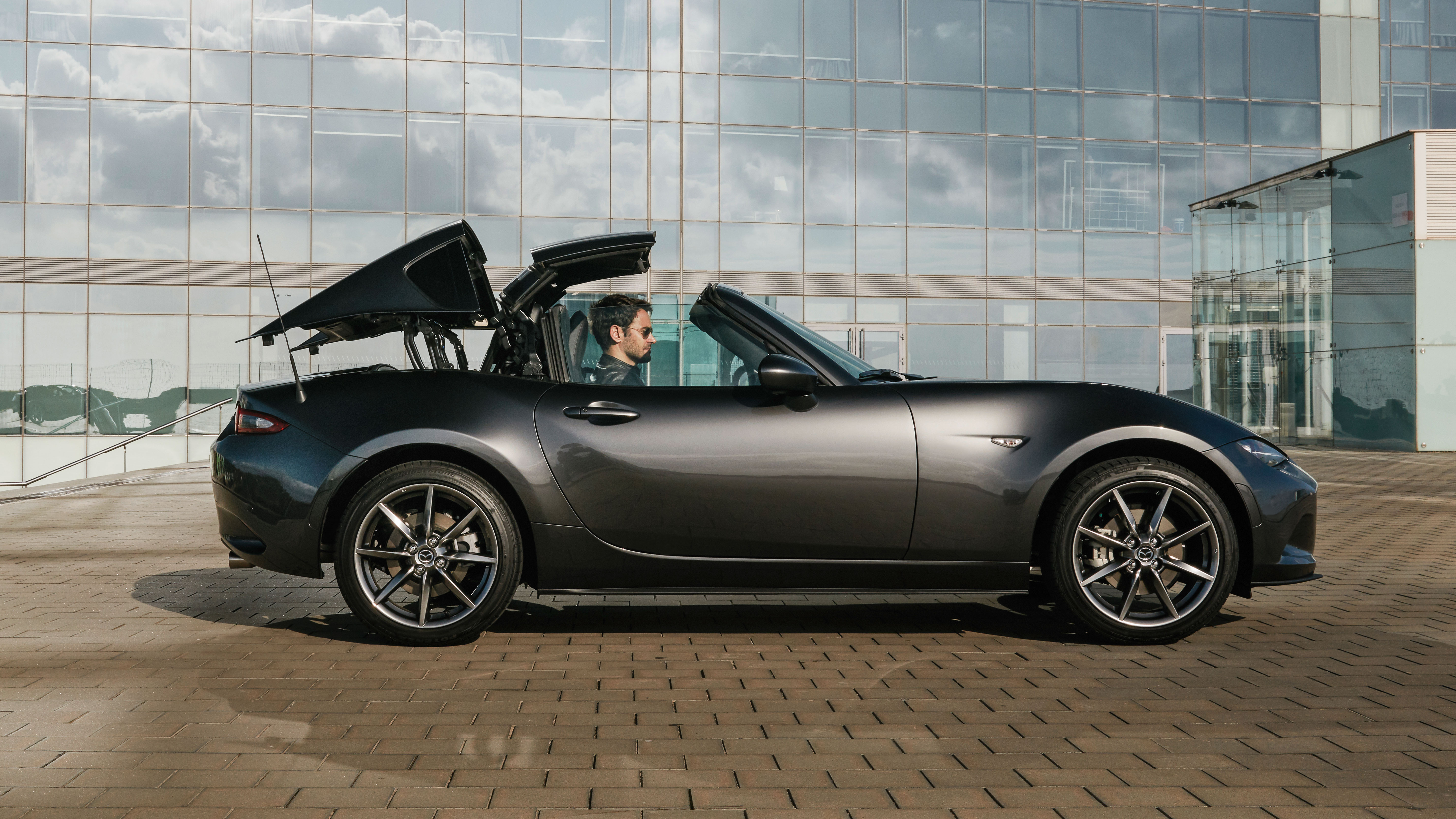 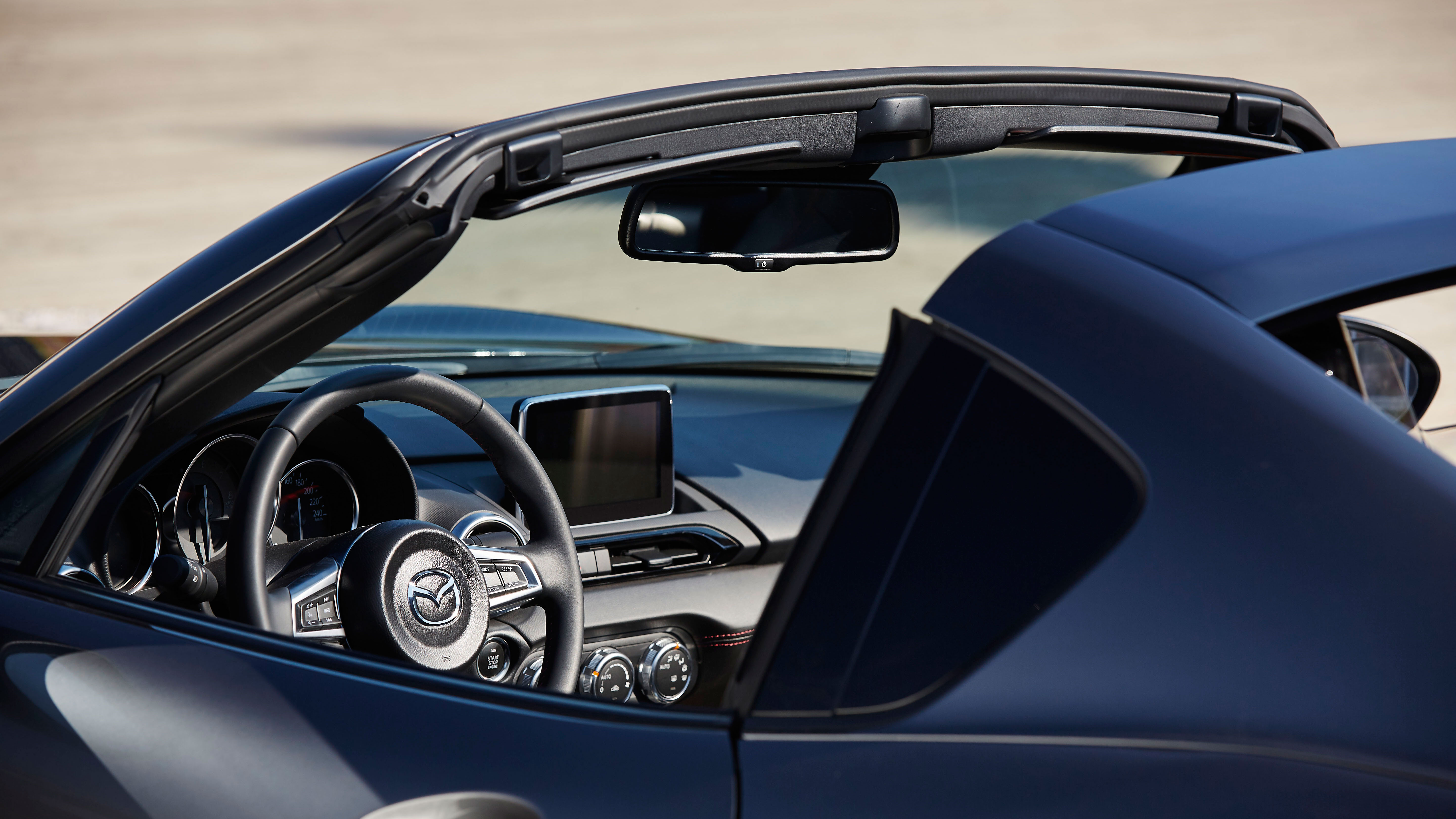 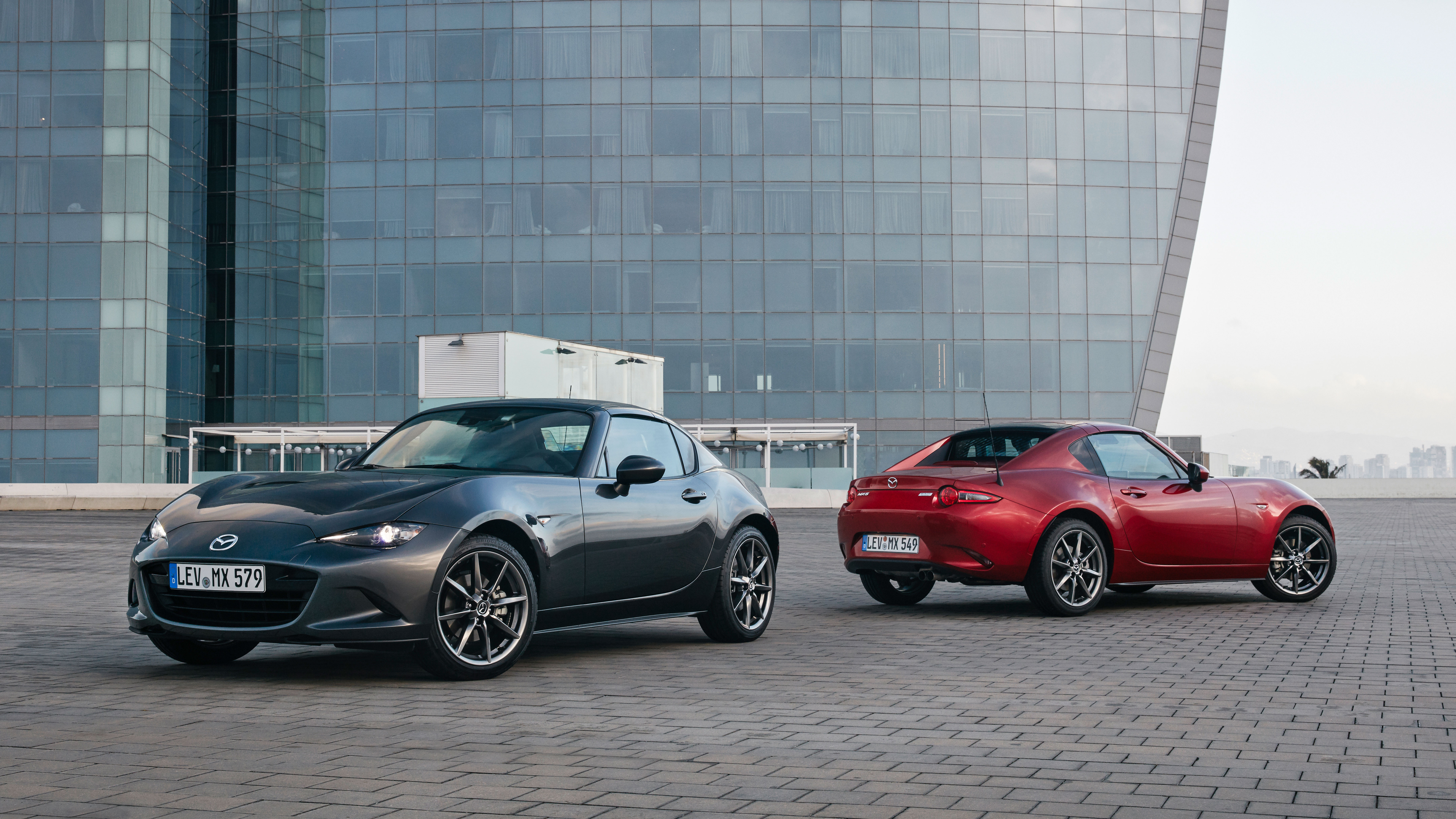 No – the opposite. If there was any car that could survive being stiffened in the suspension department and not come over all crunchy, it was the MX-5, which tended not so much to turn into corners as to flop into them. It’s fun once you’re used to it – a throwback to the old-school days of body pitch and roll oversteer in Triumphs and MGs and other stuff from before I was born – but it’s still a bit wallowy. The RF’s a mite stiffer to compensate for extra weight in the worst possible place for a sporty chassis, and the steering’s tweaked for more assistance on turn in but less once you’ve actually applied some input. And the results are…really rather good.

Yes, the car is stiffer, but this manifests itself with a more planted stance rather than a ride that’ll jiggle that expensive new roof to pieces. Okay, we’re driving it in Spain and British roads are the real lie detector for chassis tuning, but the going’s good. If it falls apart in the UK I’d be astounded. The tell-tale MX-5 shimmy on corner entry is still there, but if I had to say or be shot I’d reckon it’s more tied down than the roadster.

And with the 2.0-litre thrumming away in rorty if not tuneful fashion, the weight penalty doesn’t massively blunt performance. You’re looking at 0-62mph in 7.4 seconds, which is still ahead of a Toyota GT86. The 1.5-litre is hurt harder, losing three tenths in its 8.6sec run to 62mph. The six-speed gearshift remains a peach, and the whole car thrives on being worked hard. No modes, no real sophistication. Everything in moderation, and your kicks for free.

Or a six, as we call it in England... Anyway, no, the RF is not perfect. There is a but, and it’s a not-inconsiderable one. With the roof dropped (a 13-second task only doable at 6mph or below, so it’s a car park trick and nothing more), the wind buffeting around the new buttresses is on the severe side of irritating. It creeps up on you as the speedo climbs above 55mph, from a faint tapping to an overbearing drumming as turbulence clatters into the new structure behind your head. Above 70mph, the din is approaching intolerable.

Ever driven along at motorway speed with one window down in a car and the others up, so the pressure is unequal? Yeah, it’s that resonant, ear-popping sound, and it’s not pleasant. And not something the roadster suffers from.

So, weirdly, the most refined MX-5 with the roof up – wind noise is emphatically better suppressed when in coupe mode – is far less audibly comfortable to cruise in with the roof down. It’s an MX-5 for people who might not ever want to drive it quickly, on that basis. Which is a pity, because when you do, it’s actually a slither more sorted than the roadster. So, roof up for motorways, roof down for the sliproads. You’ll need a layby for the roof folding ceremony each time, but tolerate the buffeting (or stick to B-roads) and this is an encouraging, effervescent little car. If only it had a sexier name.