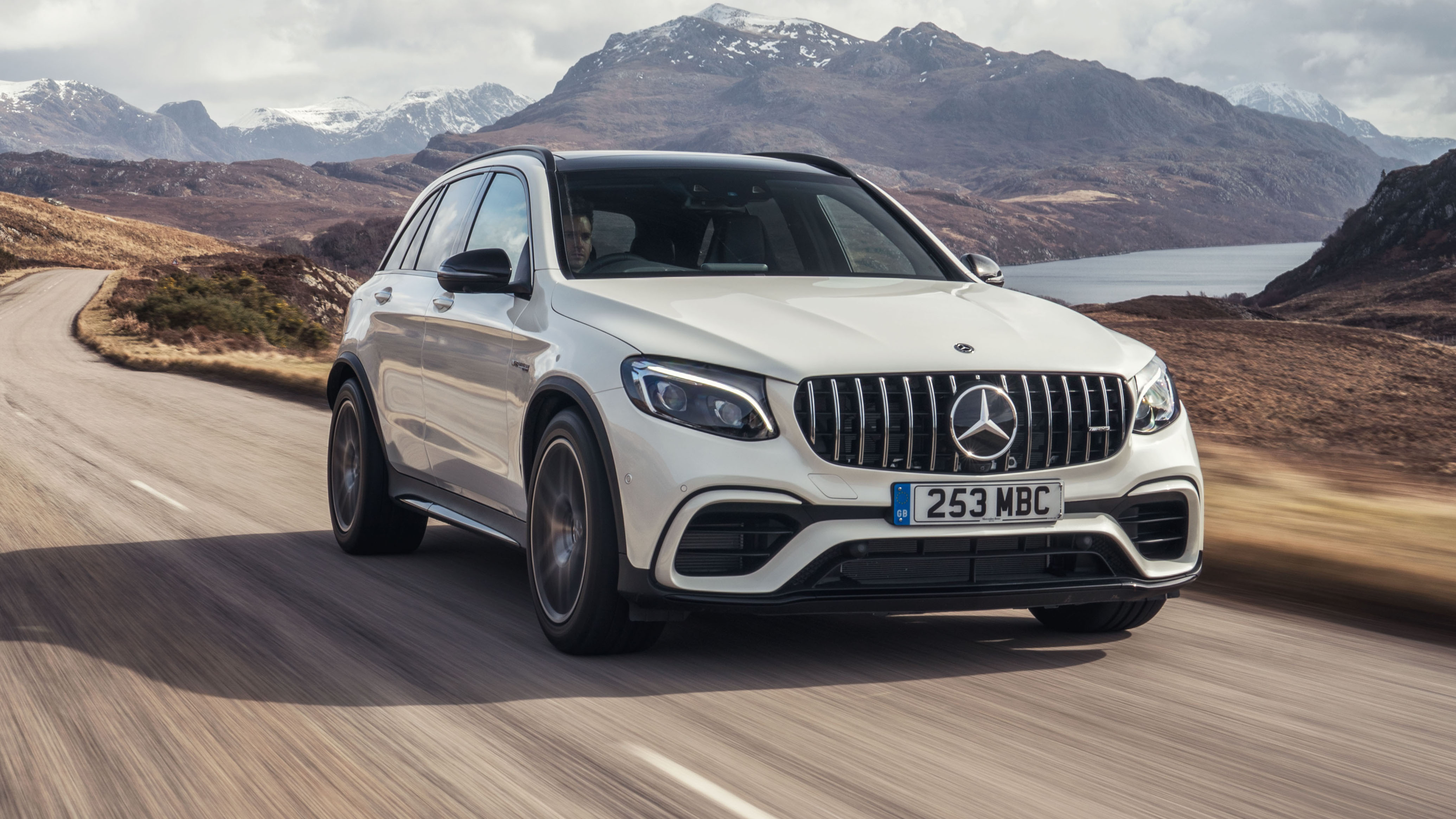 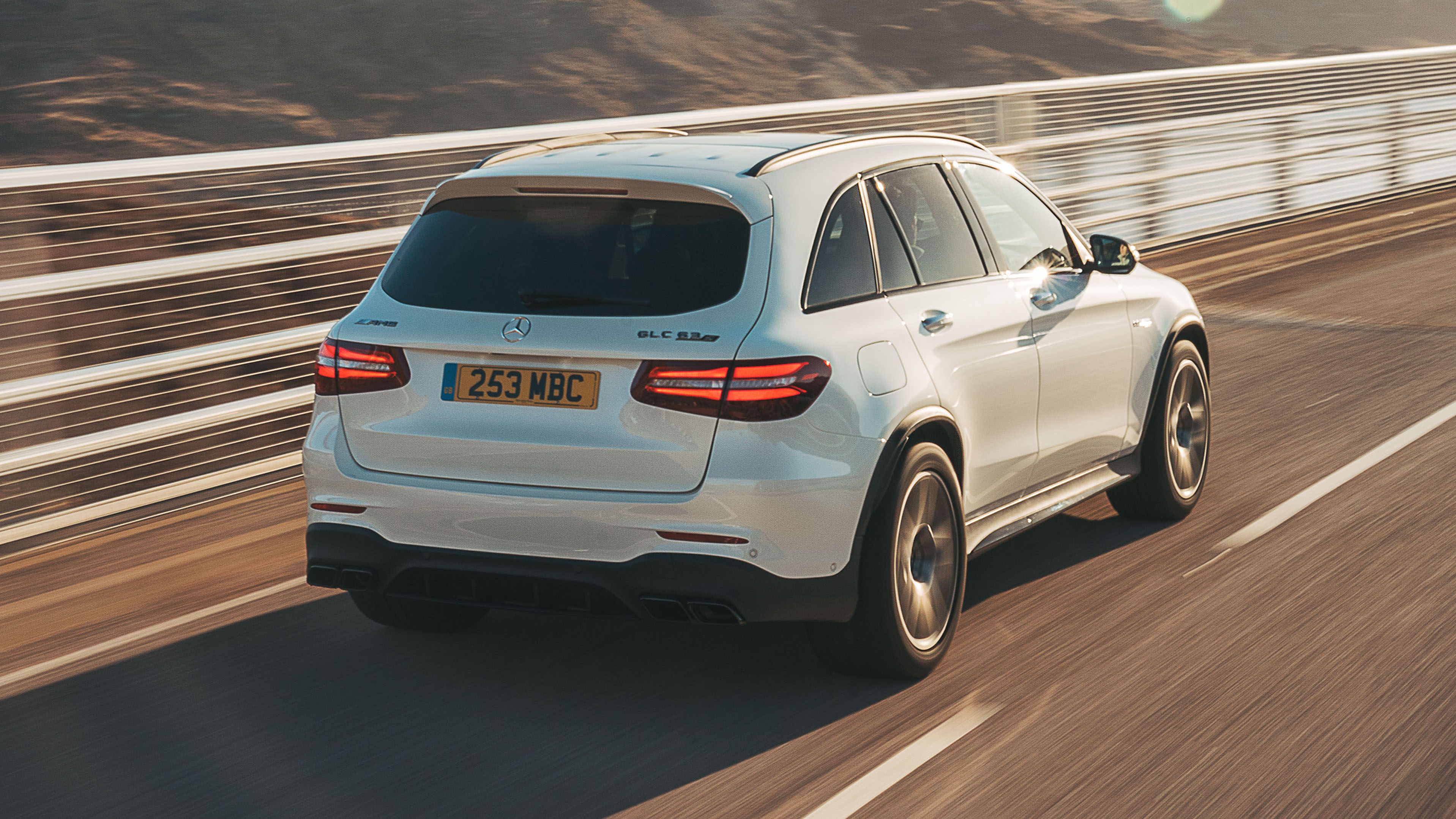 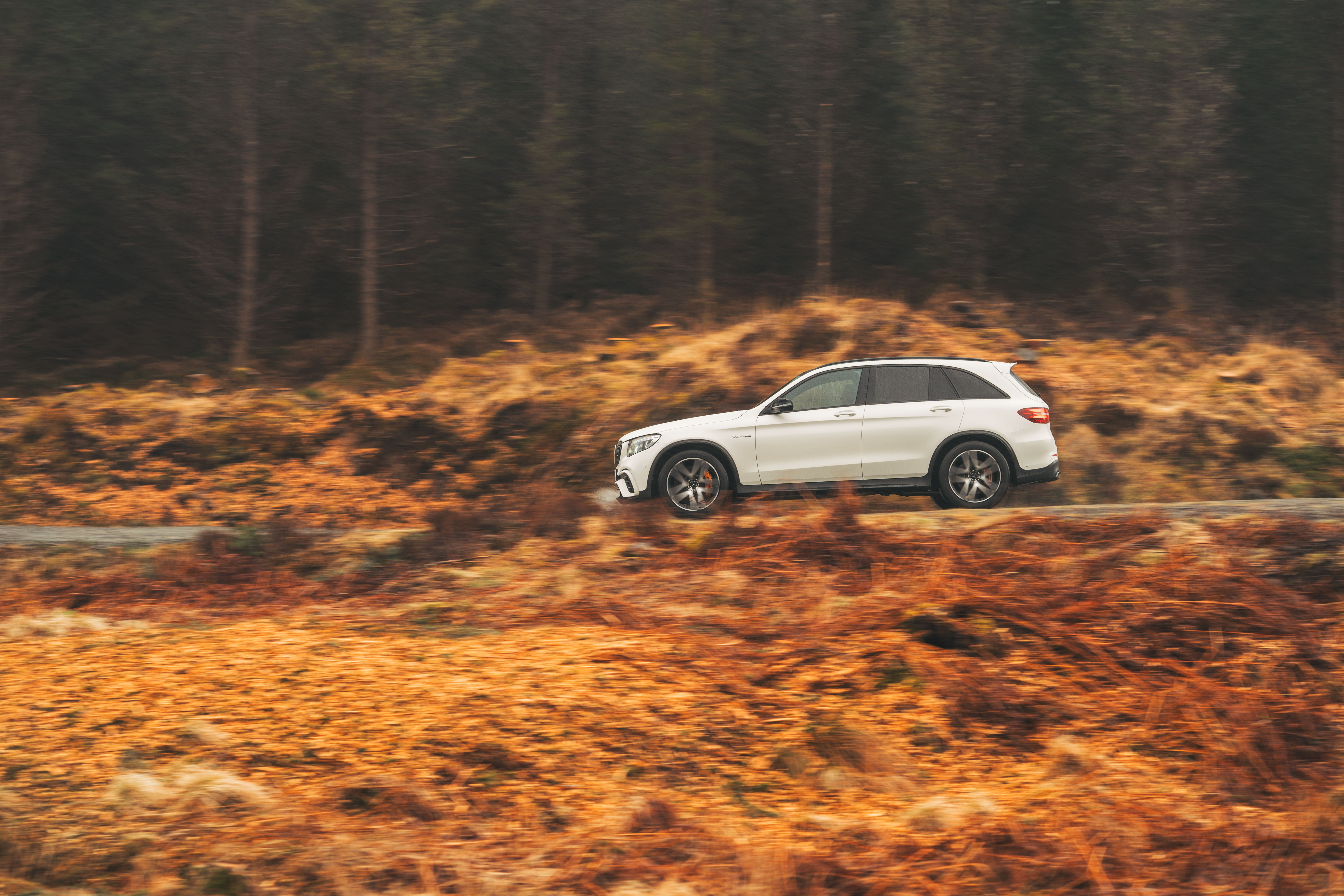 Doesn’t it just? The ‘Panamerica’ grille, wider tracks with accompanying arches and 295-section rear-tyres give this GLC 63 S – believe it or not the fastest of all Merc’s SUVs – a properly bullish stance. A stance we’re entirely familiar with, given this is actually our third go. We drove one in Germany at the end of last year, then again when Merc kindly shipped one to Sweden so it could face-off against the Audi RS4 in TG’s Winter Games. And now they’ve arrived in the UK, so naturally we asked for another go. Because, ahem, reasons.

Give me some stats.

It’s a mix between C63 and E63. Like the C you can have S (503bhp and 516lb ft) or non-S versions (469bhp and 479lb ft), and you get the same nine-speed automatic gearbox. All-wheel drive comes from the E-Class. No Drift Mode, sadly, but you won’t miss it because so provoked and space/laws/bravery/skill permitting, the GLC 63 is capable of some exceptionally anti-social behaviour. We’re driving the S, which does 0-62mph in 3.8 seconds (this is a 2,010kg car, remember) and with the optional AMG Driver’s Package, will hit 174mph. Ours had ceramic brakes and many other options (the £1,000 performance exhaust is well worth having... and leaving on permanently), turning this £76,070 car into a £89,180 car.

Quite. The non-S GLC 63 starts at a shade under £70K – more or less the same as its two arch competitors, the Alfa Romeo Stelvio Quadrifoglio and Porsche Macan Turbo Performance Pack. Both of those are easily optioned up into the eighties too, so don’t go thinking the Merc is super-overpriced. Its interior is fine at £70K (but struggles at near-£90K), broadly mirroring what you get in regular C-Classes and GLCs save for the superb AMG steering wheel and schporty seats. Which, incidentally, are comfortable, supportive and set just-so.

Oh yes. Naturally the engine is the dominating force – it makes silly and excellent noises through the optional sports exhaust and delivers a turn of pace that far exceeds what is reasonable or indeed sensible for an SUV. There’s a fair bit of shunt through the transmission, but for the most part it’s smooth and responsive to flicks of the aluminium paddles, delivering a churlish whomp with every downshift.

The steering isn’t hyper-fast – it’s quite well-judged actually, with good heft, and corners/direction changes are handled with surefooted confidence and minimal roll. Grip is predictably serious, and easily/amusingly overcome if you click through into Race mode (which the non-S doesn’t get), knock the ESP back into Sport and apply liberal ammounts of throttle.

All of that you’ll have read before – what matters most this time around is how it rides Britain’s uniquely awful road surfaces. Surfaces that keep German engineers up at night, such are the peaks, troughs and potholes you’re likely to encounter on any and indeed every trip. And the news is…firm. The E63’s weak-spot – pretty much its only one – is the way it rides. An M5 is more comfortable over rough surfaces. The GLC is certainly firmer than a Macan Turbo, and it fidgets a bit when you’re going slowly, but at no point did it annoy or irritate us. It’s firm because it’s a performance car, but buy one and you won’t give it a moment’s thought.

Is it better than the Alfa?

We'll stop short of calling it one way or the other until we can get them together. But the V8 makes a compelling case, and good as the Stelvio looks the Mercedes is undoubtedly a higher-quality product. Watch this space.