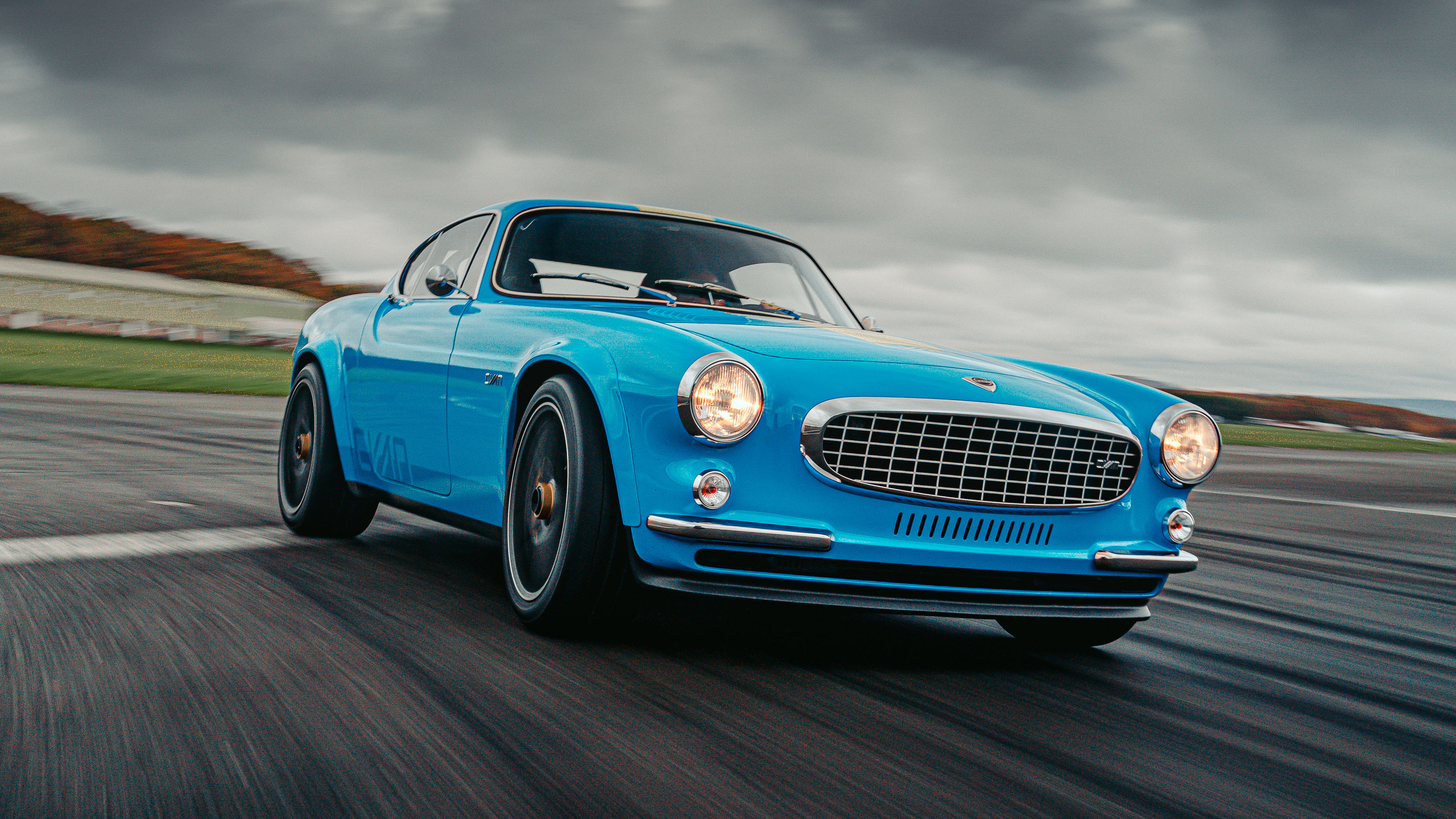 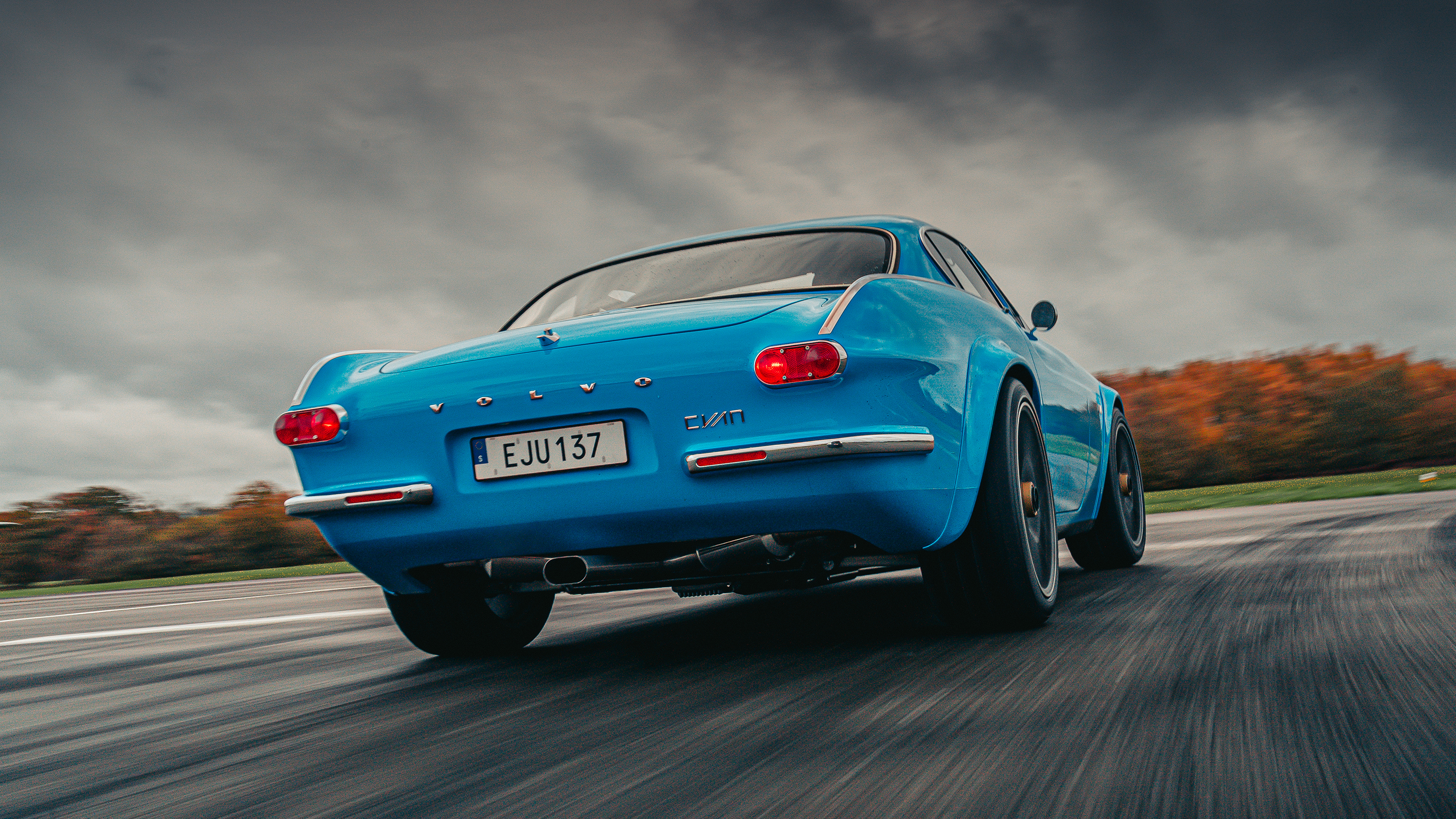 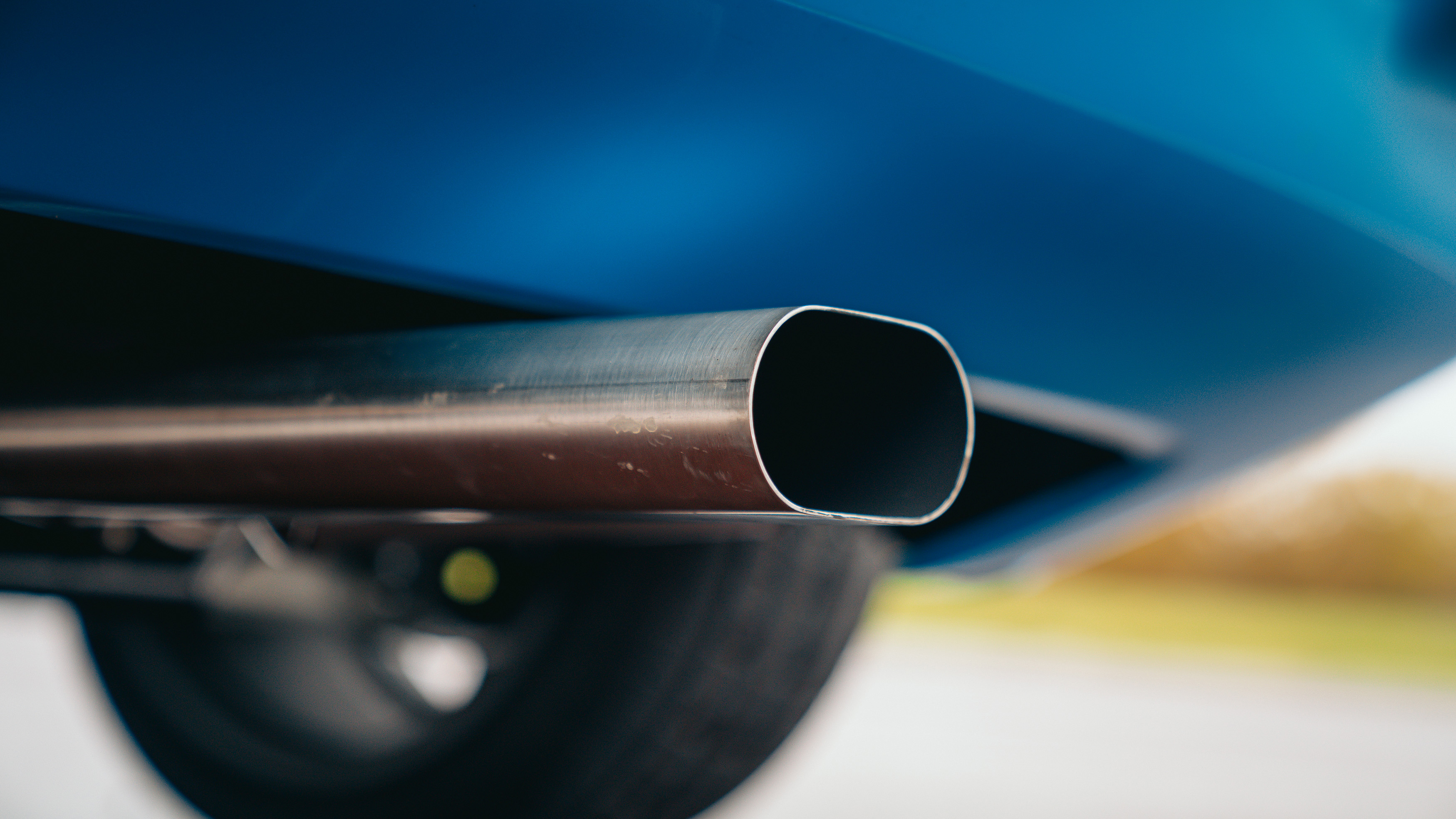 If you’re one of the ten-or-so lucky sods each year who’ll take delivery of a £380,000 Volvo P1800 Cyan, may I suggest dropping some of your chump change on an original P1800 from the Sixties, too. Only then will you appreciate the lengths Cyan Racing has gone to to kiss the very peaks of restomod perfection.

While the old-timer is all sorts of wonderful - four and a half metres of sweep, swishes and swoops perched atop moon disc hub caps - Cyan’s reimagination is better. It takes the Volvo’s Driving-Miss-Daisy-delicacy and adds muscle in all the right places, tweaks the overall proportions to suit (the wheels are moved forward, giving it a more cab-back stance) and displays a forensic attention to detail that draws unavoidable comparisons to a hallowed company in California. What Singer does to old 911s, Cyan has done to an old Volvo.

Dismantle one and the only carryover parts from - in this case - a 1964 donor car are 50kg of steel around the passenger cell, the bonnet catch, a fly-off handbrake and the windscreen wipers. Forget faithful replicas, this is very much a fantasy reimagination of what a P1800 stuffed with today’s latest track-developed technology would look like. And it looks good.

Cyan Racing, to the uninitiated, is the team formerly known as Polestar – before Volvo re-assigned that name to its all-electric offshoot. Whatever they’re called, they’re the current World Touring Car kings… so they know a thing or two about turning street-spec Volvos into track-tuned champions. This project, according to Hans Bååth – Cyan’s General Manager, was born to celebrate World Touring Car Championship victory in 2017, the same year Volvo celebrated its 90th, making it “a homage to all Volvo motorsport".

The car is, of course, rear-wheel drive. There’s a five-speed manual Holinger gearbox, a limited-slip differential, the suspension is all-new - with race-grade double-wishbones and adjustable dampers - and almost everything that can be carbon fibre is now carbon fibre. Meaning it weighs just 990kg. That’s less than a Ford Fiesta. Oh and there’s no electronic aids – no traction control, no ABS. You’re on your own, Sven.

The experience begins way before you turn the tiny key in the barrel. You approach it craning your neck to take in every angle you can, crouching to admire the centre-exit exhaust, running your finger along the upswept feature line and chuckling at the sheer obsession in continuing the creases into the bolt-on arches. The colour: not just Polestar blue (Volvo, admirably, has agreed not to use this paint for the next decade to avoid confusion) but a nod to the national racing colours of Sweden. The stripe is colour-matched to Gul Yellow from the 850 T-5R.

Door open, step over the roll cage and descend into a world of black leather, itchy-looking Scandi-cool grey fabric, chrome dials and switchgear engraved in Swedish. If it rains, you’ve got a one-in-six chance of finding the wipers.

Fire the engine and there’s a woofly but monotone idle, give it some revs and you get the odd detonation on the overrun. Sorry, but this is a car that sounds better from the outside than in - passers-by, you’re in for a treat on more than one level. Dip the clutch, grab the spindly but rigid gearlever, mind the high-biting point and you’re rolling. It demands no more of the driver to operate than a diesel XC40… unless you choose to poke it with a stick, or in this case a battered size-nine running shoe.

Ooof, it hits hard… undeniably turbocharged, but the boost doesn’t arrive in one dump, it’s fed in smoothly and makes chasing the redline worth it. Hold onto the gears though and you’re properly shifting by the time you’ve slid down the dogleg-pattern 'box into third.

I’m constantly aware that there’s moisture on the surface, no electronics to mask my talent deficiencies, luxury houses that cost less and currently only one of these in the world. But stick at it and the car begins to embrace you, you start to trust the rapid power-assisted steering, learn that the brakes like to be mashed, that a little or a large slide here and there is how it likes to be handled. Cyan calls it “an authentic rear-wheel-drive experience,” we call it an OAP with bionic hips and a repeat prescription for adrenalin.

This could have so easily been a racecar with a numberplate wearing a nostalgic hat - banging in lap times is Cyan’s speciality, after all - but Bååth says he fought hard to ringfence the fun. What you get then is a neat road/track compromise – soft enough to enjoy on the public highway, fast and interactive enough to keep even the handiest of hands happy on track. You can forget your stopwatch and just enjoy a bit of built-in squish, the natural movement of the car through your buttocks and that old-school analogue feel despite a new-school tolerance to abuse.

When we first saw pictures of this car, and had taken a quiet moment in the corner to regroup, we all assumed it would be electric. When we discovered it wasn’t, joy was universal in the Top Gear office. Not because we don’t like EVs, but because a car that’s a homage to the past deserves to represent it in all its fuel-belching glory. Plus, “it would have been 1,500kg", Bååth reminds us. “This is a time capsule of everything up until now, electric comes next.”

In my book, the mark of truly great food is taking the simplest of ingredients and making them sing. I ate grilled lettuce covered in a mystery sauce at a South African restaurant once, and let me tell you it was transcendental.

This is a carbon fibre, two-seat coupe with a four-cylinder turbo in its freakishly clean engine bay. The specs are nothing special, but the overall taste is. Factor in the back story, the audacity of the idea, the thousands of man hours to build it, the OCD fit and finish, the depth of character that continues to reveal itself the more you drive and the love that spills out of it, and you're left with something very special indeed. I love driving and geeking out on modern supercars, but if it was my own money? Give me a garage full of these.