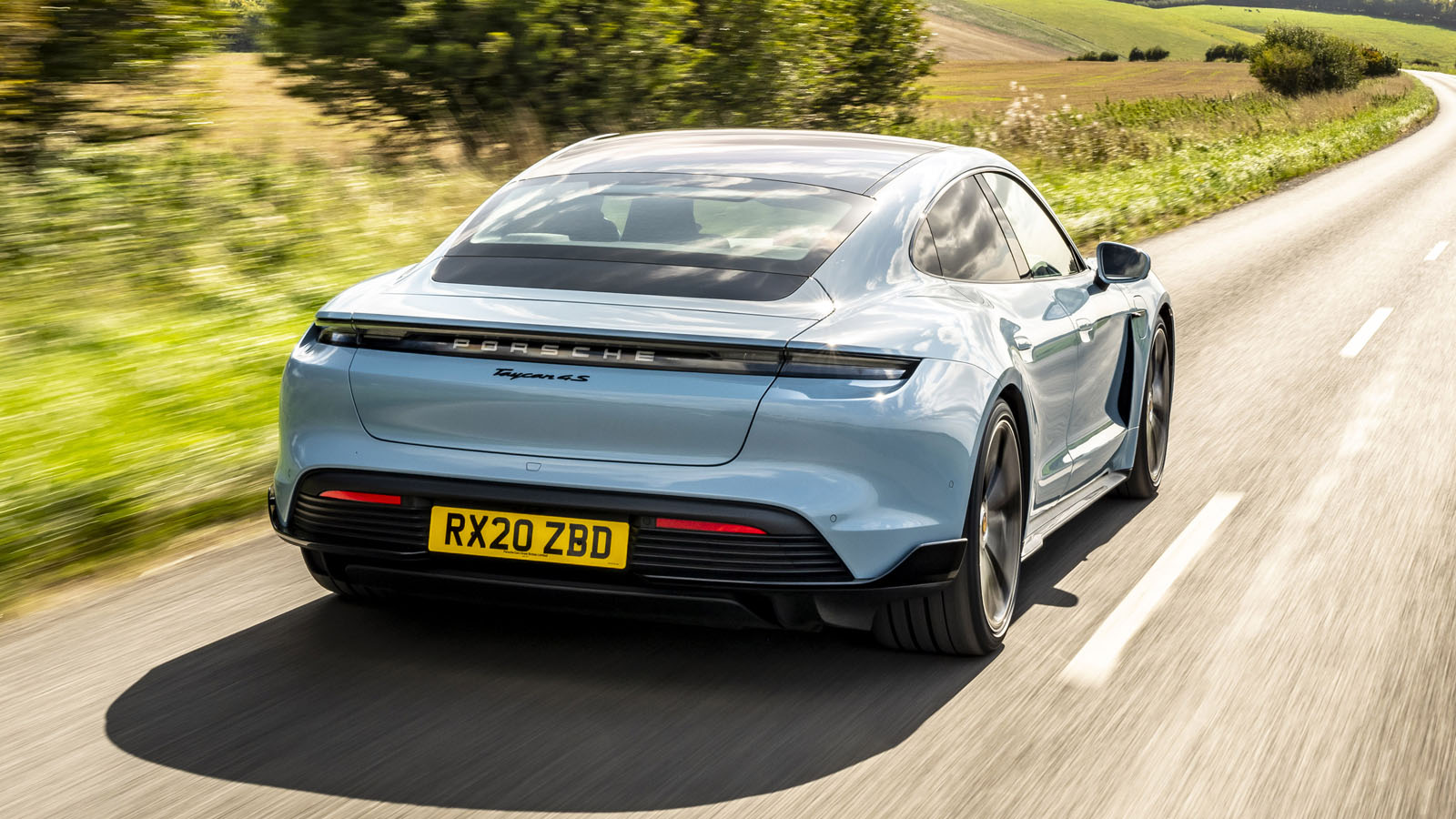 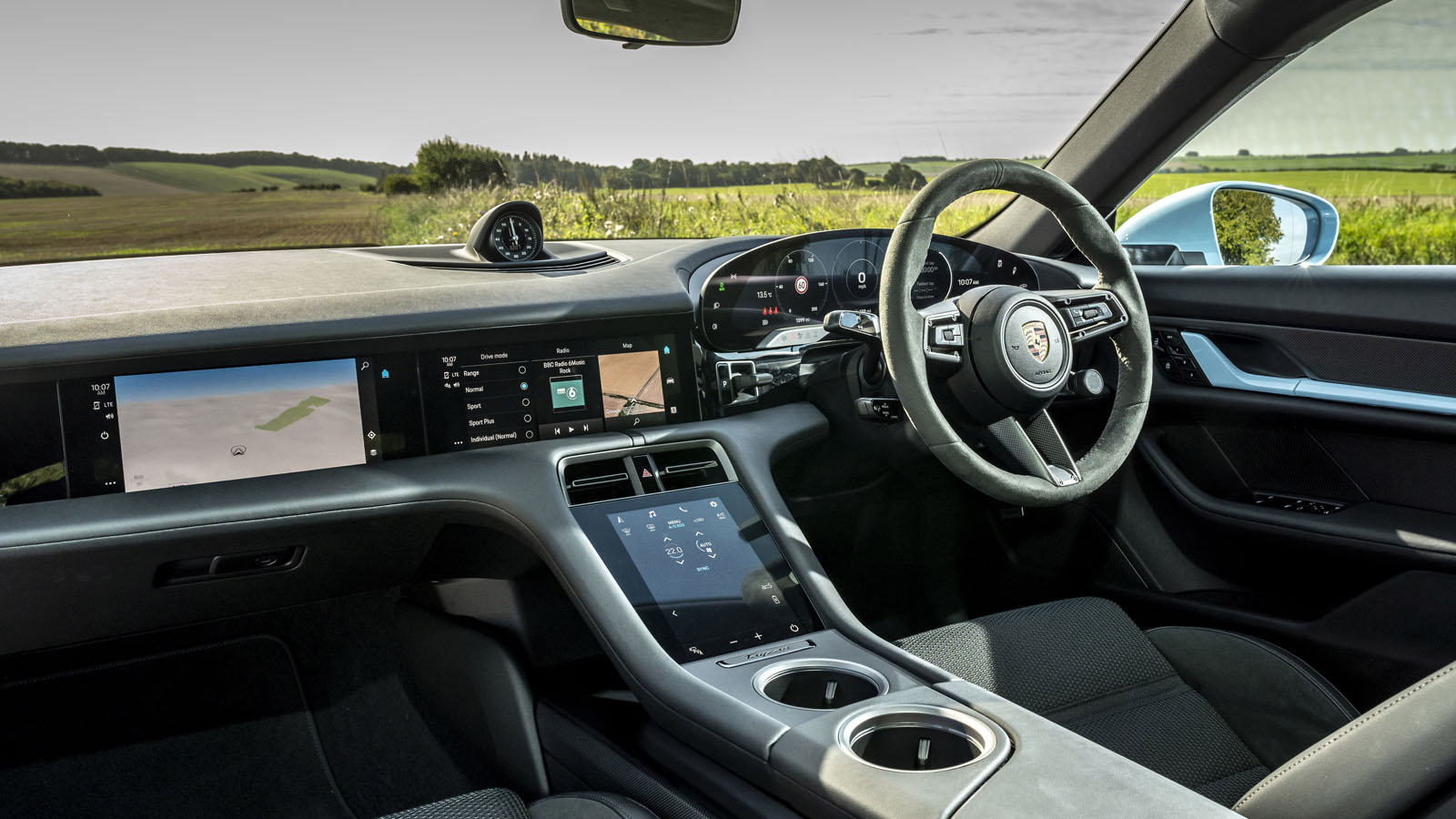 As standard, My First Taycan offers 321bhp. In its temporary overboost mode, power leaps to a Jaguar I-Pace-sized 402bhp, and that’ll punt you from 0-62mph in a claimed 5.4 seconds. Spend some of your RRP savings on the Performance Battery Plus (just under £5k), and battery capacity climbs from 79kWh to 93kWh, upping claimed range from 220-268 miles to 253-301 miles. Meanwhile you get 375bhp under your right foot, or a temporary 469bhp on overboost – though Porsche says the upgraded car isn’t any quicker, because the battery weighs more.

At the other end of the price list, the Turbo S makes a stonking 616bhp in normal running (750bhp and 774lb ft in overboost). 0-62mph takes 2.8 seconds and it’ll do a 10.8 second quarter-mile. Carbon-ceramic brakes and wider tyres are standard, as is a range of between 242 and 258 miles. Yes, you’ll want the Turbo S more than any of the other Taycans, but in 99 per cent of road-based situations the Taycan and 4S, with the big-battery option, are all you need.

Locate the toggle selector behind the wheel, flick into D and the car hums gently, just enough to let you know it’s alive. Squeeze the throttle and off-you-ooze, along with a noise I can only replicate by making the sound ‘OOOOOOOOOOO’ with my lips pursed so they emit a faint whistle at the same time. Try it. Maybe not in public. Want to crank up the synthetic soundscape? Turn on the ‘Porsche Electric Sport Sound’. You will for a week, then probably get bored of it. At least it’s optional, so you don’t have to have it. Around town the Taycan is effortless, silent, comfortable and doesn’t feel as wide as it looks – a joy, in other words, even when the traffic and speed cameras conspire against you.

I’m in the Turbo S, first opportunity to floor it from a standstill and ‘weeeeeeeeeeeee!’ – that’s the car, not me – but am momentarily concerned that I may have dealt myself a whiplash. The initial kick is violent, borderline unpleasant, and it simply doesn’t relent. Keep it pinned and you notice a change of tone – the two-speed gearbox changing up – at 70km/h, with gentler throttle inputs it’ll switch earlier.

Okay, but does it handle like a sports car?

The steering is spot on, not massively detailed in its feedback, but not overly caffeinated either and with a sense that your hands have a direct connection to the front wheels. Body roll is all but absent at sane speeds, remarkable given how supple the air suspension is in everything but Sport+ mode, even on 21s. You can of course sense the weight - the momentum that needs shedding or shifting direction, the way the suspension hits its stops on big compressions - but both the low centre of gravity (lower than a 911) and drop-kick acceleration the nanosecond you need it do a great job of masking the worst. It feels heavy, but not 2.3 tonnes.

Part of that credit goes to the brakes. Mostly, when you apply them what your leg feels is synthesised, pads don’t meet discs until you really stomp on the pedal. The regen system can feed a massive 265kW back into the battery, so only calls on mechanical friction when you exceed that. Programming even a semi-natural feel must have been a headache and a half, but they’ve done it. In fact, Porsche reckons 90 per cent of the time all your braking will be by regen and you’ll be blissfully unaware – which is why the standard cast-iron brake discs on the Turbo have a tungsten-carbide coating – to stop them rusting from neglect.

Pouring it down a B-road, I’ll admit, I miss pulling paddles. It’s part of finding your rhythm down a fast road: two yanks and a bit of brake, turn-in, feed the throttle back in, change up, change up, repeat. Without it you find yourself arriving at bends faster than you think and, assuming you’re not half way up a tree by this point, slamming the throttle earlier than you’d normally dare. Traction is mightily impressive, even in the RWD car, but overall there’s less for the driver to do.