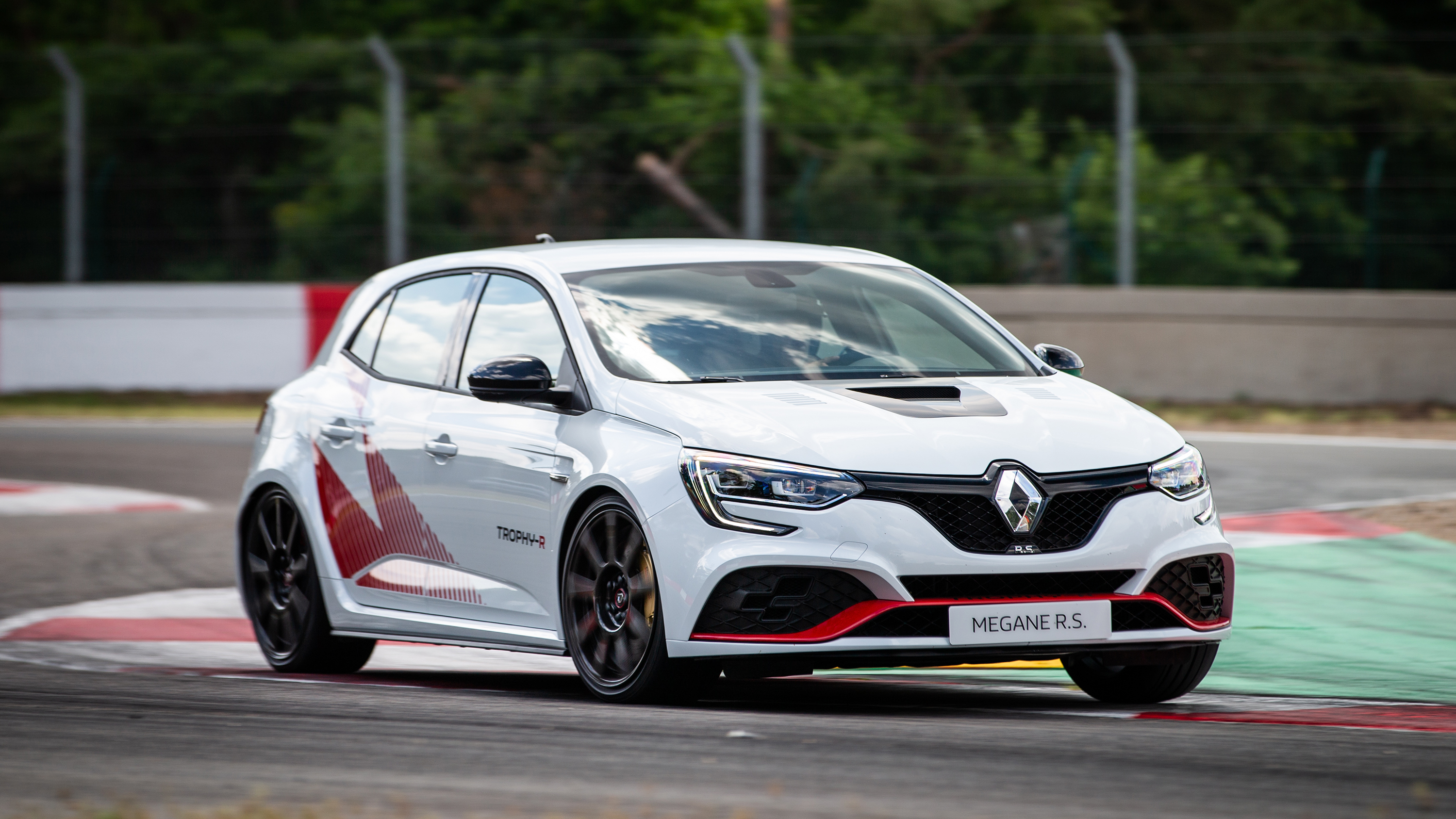 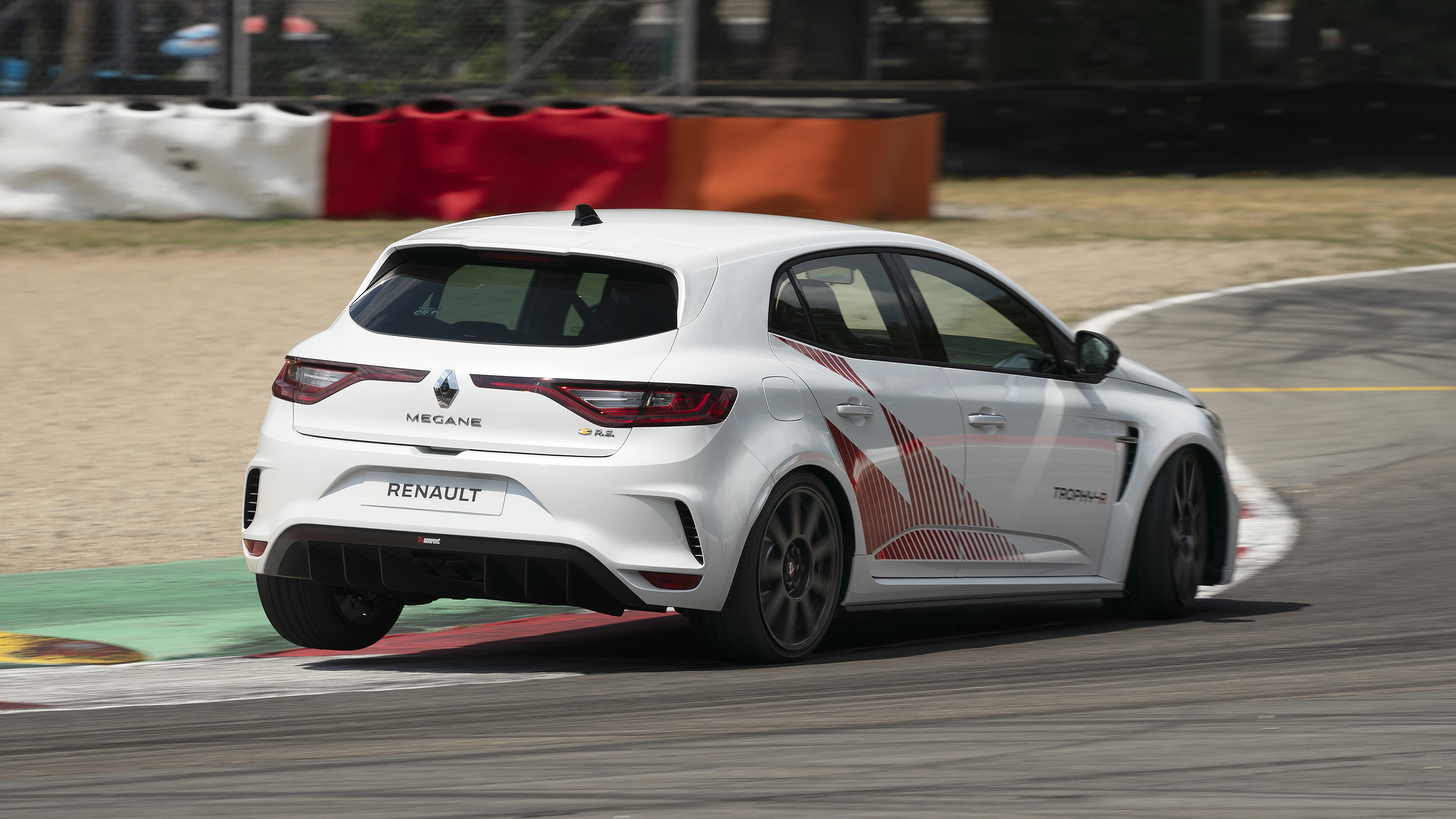 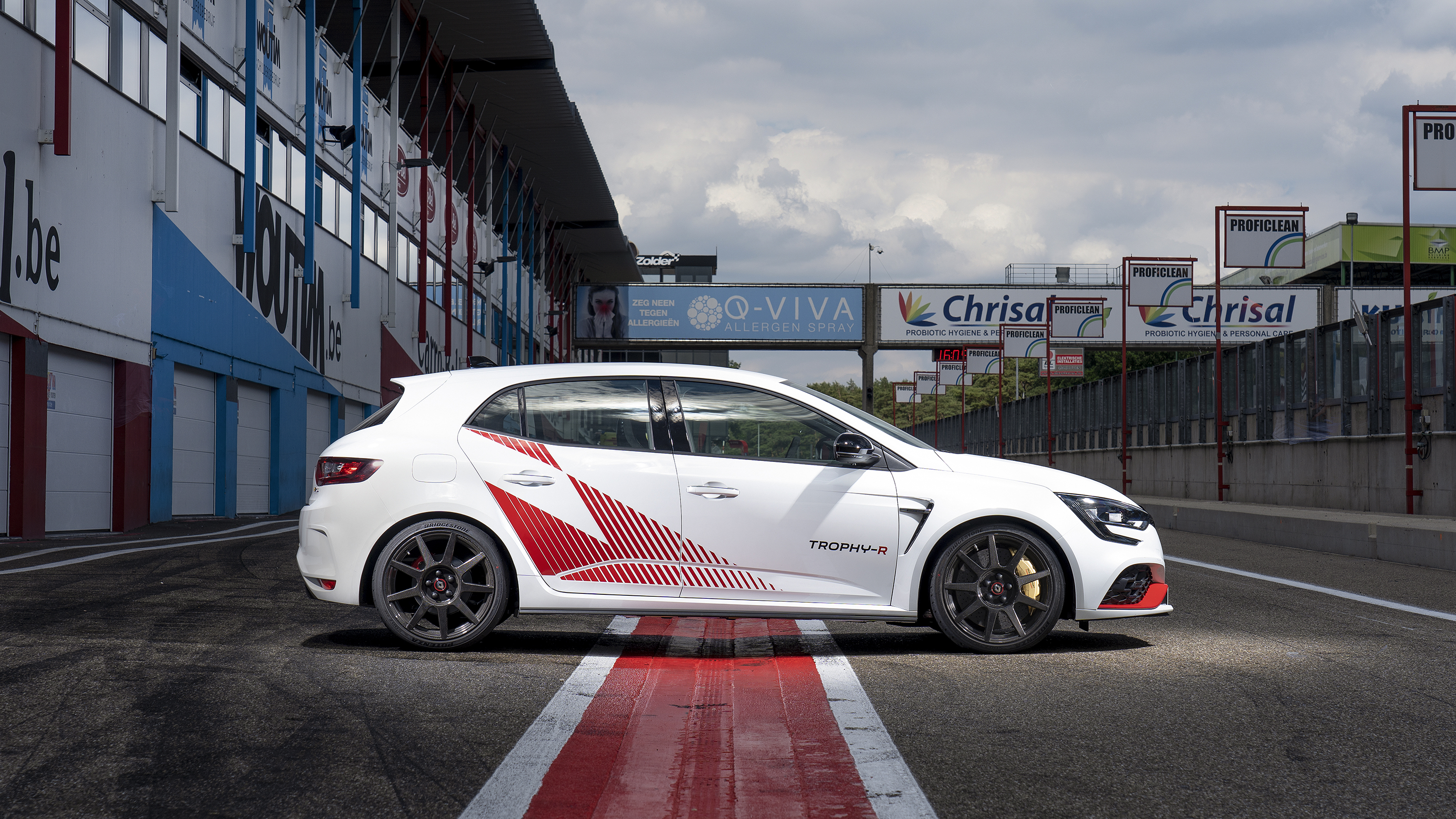 Got it in one. This is the Renault Megane RS Trophy R, a lightly complex name for what transpires to be a joyously simple car to get your head around.

Delve beneath the skin and you can quickly immerse yourself in a world of geekery, but, taken as a whole, this is a hardcore Megane of the most familiar recipe: strip out all the superfluous parts, lob on some extraordinarily tenacious tyres, watch the lap times fall and fun levels soar.

A record-breaking 7m 40.1s if we’re talking Nürburgring lap times, making this the quickest front-wheel-drive production car around the Nordschleife. For this month, at least. Given the 296bhp Trophy R is 20bhp down on the Civic Type R it’s sliced three seconds from – and is bereft of its downforce – that’s pretty scintillating.

Especially when you learn Renault Sport nabbed the record in a week of torrid weather and the Trophy R claimed honours in 5ºC temperatures, well below the point at which its committed Bridgestone tyres are happiest.

How come it’s so quick?

Weight. Or a very notable lack of it. Renault has stripped 130kg from the regular Megane RS Trophy, which is even more than the original Megane R26.R managed with its iconic plastic windows. The new Trophy R uses glass all round, instead losing its kilos via more extravagant methods.

In keeping with fast Megane tradition, the rear seats have gone (saving 25.3kg) and the front two have been replaced by bespoke Sabelt buckets (14 kg) with optional race harnesses. You’ll want those. There’s a carbon composite bonnet with operational NACA duct (8kg), a riotously popping Akrapovic titanium exhaust (7kg) and the rear wiper has been thrown in the bin (3kg).

Most nerdy of all? The infotainment screen is Renault’s smaller item, saving 250g. Asked if ditching the whole system is an option, a la the Trophy R’s forebears, Renault says customers never bothered (likewise with the air con). Crucially, it contains the drive select system, which remains, culminating in an ESP-off ‘Race’ mode.

The best bits have been saved for last. The options list includes carbon ceramic brakes and carbon wheels (saving 18kg combined), a first outside the realm of supercars. And the most controversial element of the fourth-gen Megane RS – its four-wheel-steering system – has been ditched, taking almost 40kg out of the rear axle, enough to warrant a new set up at the back to avoid the car suddenly turning nose-heavy.

Indeed, there’s a wealth of chassis upgrades. Steep negative camber is applied to the front wheels, there’s a manually adjustable Öhlins damper on every corner and the ride height can adjust through 16mm (and individually front to rear, adjusting the handling balance) with a simple tool.

The steering has been tweaked to account for it all and the wheel now comes wrapped wholly in Alcantara, rather than draping it incorrectly at the top and bottom of the wheel as per the Megane RS Trophy it sits atop. Oh, and you can only have a manual gearbox, because it’s lighter than Renault Sport’s optional paddleshifter. End result? A 1,306kg kerb weight if you’ve ticked all the boxes. 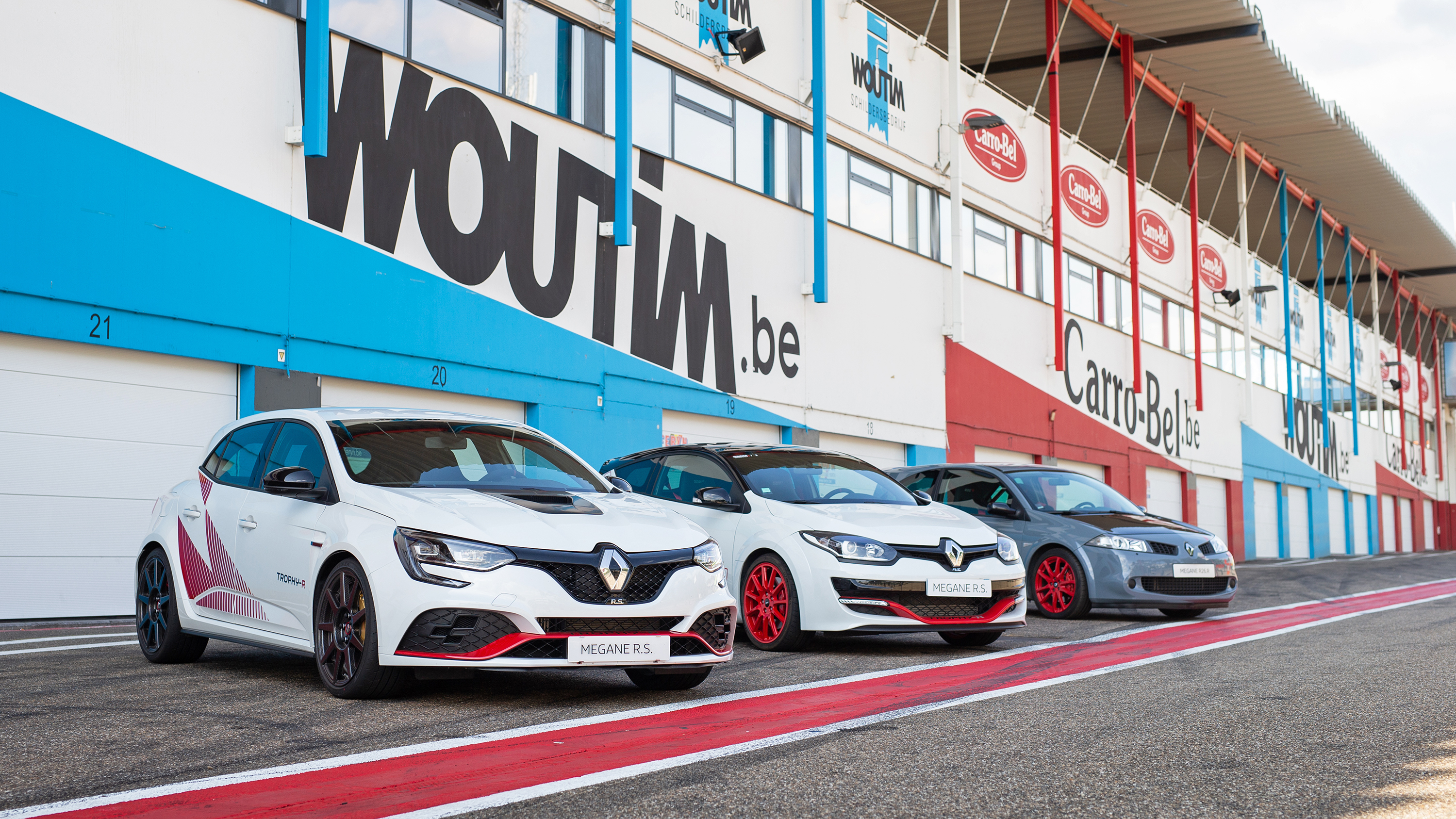 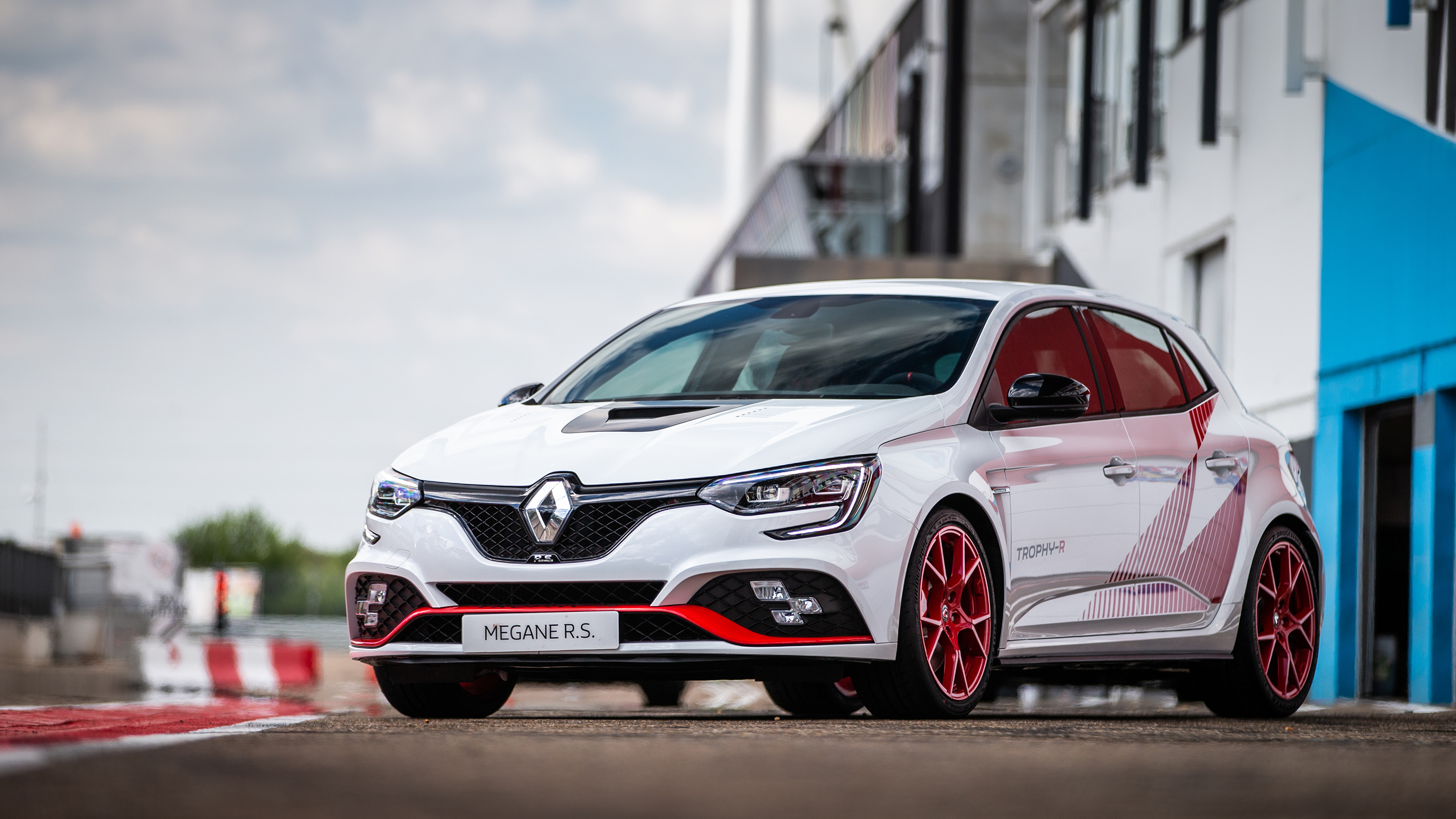 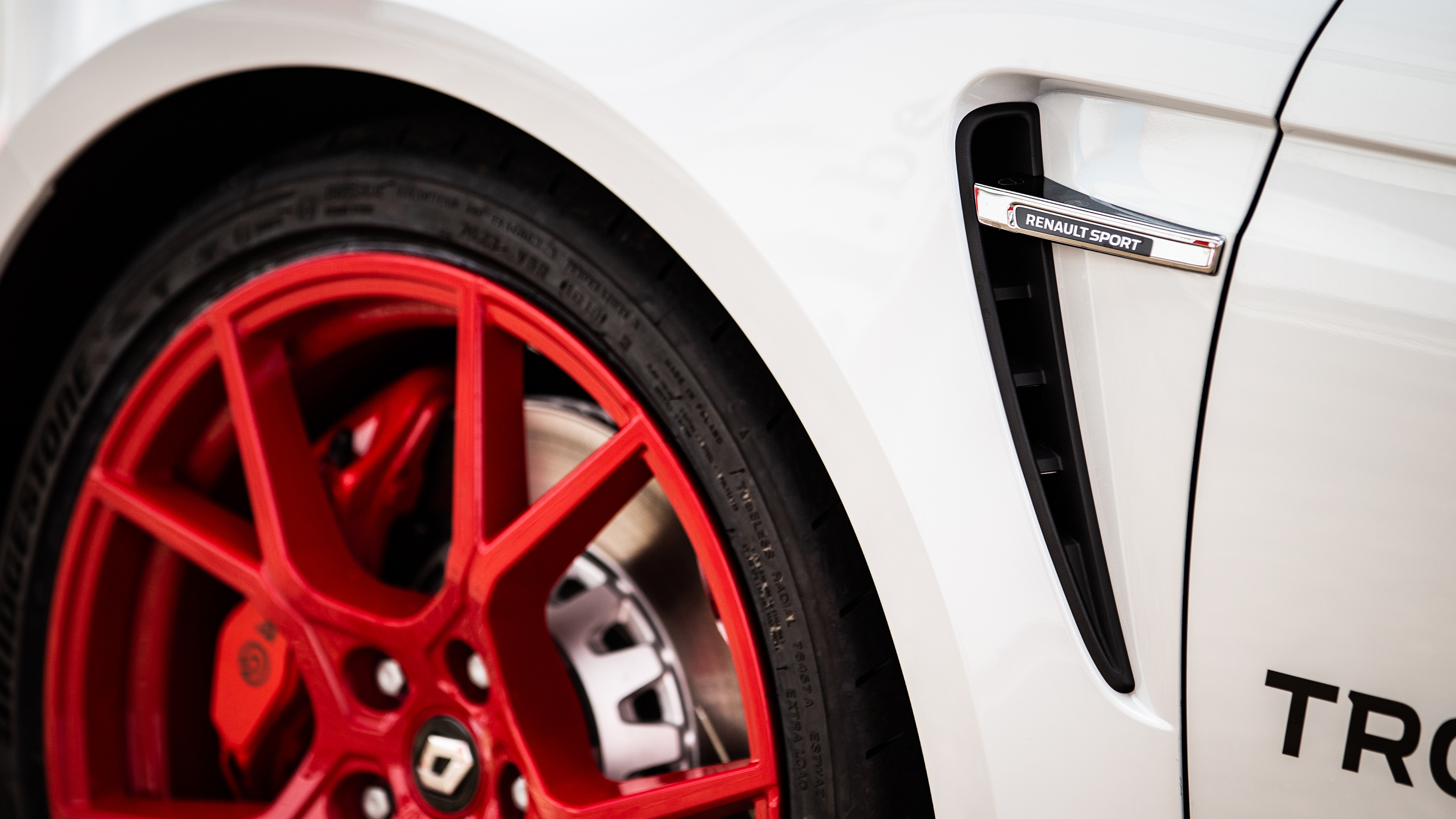 So it’s a proper driver’s car…

Well, the official story is that the four-wheel steer and optional auto ’box have gone purely because of the kilos they remove, but we suspect there’s a little more to it than that. Renault Sport tested Trophy R mules with the former fitted, working out whether it provided handling benefits that would eclipse any weight saving.

We’re glad they reached the conclusion they did; ‘4Control’ has helped relegate the standard Megane RS from the upper echelons of the hot hatch class, and without it, this Trophy R is a proper, rip-snorting return to form. Perhaps it’ll influence less extreme Meganes to come. We live in hope it does, because the poor steering feel of the standard car is banished, a newly uncorrupted flow of information brimming through the wheel. As much as I could tell on track, anyway; on a bumpy B-road it may prove different, but past form suggests not. Likewise the ride quality.

Renault’s engineers describe this as a car flagrantly for purists – “track enthusiasts who really know how to drive” – and thus the sharpness of its controls and effervescence of its performance come at the cost of anything that might get in the way. There’s no auto rev-match on downchanges, a pervading sense of twitchiness under hard braking and a flamboyant rear end if you’re sudden with your use of brake or throttle pedals mid-corner, deliberate or otherwise.

It’s brilliant, actually. The gear knob remains an ergonomically challenging shape, but you end up slamming your changes through so quickly that it ceases to be something you dwell on. The physicality this car draws out of its driver is intoxicating; within a couple of sighting laps at Zolder, I was braking with all my might, using every inch of kerb and chasing every last rev.

The Trophy R took it all with a mere shrug of its shoulders, too, egging me on to try even harder the next time. You can thank proper brand-name componentry running through every inch of the car for that. A car with the standard red wheels and steel brakes is hardly a duffer, but there’s tangible extra precision if you’ve specced carbon at each corner instead. You might want the extra brake life too, given how hard you’ll be driving.

Oversteer only comes in really big handfuls with proper commitment, but it says so much about the transparency of the Trophy R’s reactions that you end up chasing it, upping your own game to try and scale the summit of the Megane’s talents. With 20 clicks of adjustment on each damper and 16mm of scope in the ride height, you can raise (or reduce) the difficulty level to your heart’s content, too. Driver Laurent Hurgon’s set-up choices for that ‘Ring lap can even be found online. Just don’t go aiming for his lap time on a Touristenfahrten...

Ah yes. The price. I’d deliberately kept that until the end, because I didn’t want you to make a snap judgement on this Megane and move on. UK pricing will be confirmed at the end of August, when the order books for our 30 cars (from a run of 500 overall) will open. But in Europe, the Trophy R will start at around €55,000 before you’ve added those carbon wheels or brakes (only 30 cars being offered with the latter). Some rough, speculative maths suggests a £50,000 base price and anything up to £70,000 if you’ve ticked every box on the options list. You can delete the decals, don’t worry.

Yet Renault assures us a vast swathe of those 500 cars are already accounted for, before suggesting the Trophy R’s target buyer is a proper aficionado who might already have a Ferrari 488 Pista or Porsche 911 GT3 RS. They just happen to fancy something a little less delicate to really hammer around on trackdays. If true, that’s the kind of two-car garage I’d sell every one of my non-vital body parts to attain. Perhaps some of the more important ones, too.

I can’t begin to process that price.

Then don’t worry about it, because this car is a good news story whether you’re looking to buy one or not. It exhibits all the wonderful purity of its Megane R26.R and 275 Trophy R predecessors, just with yet more speed and grip. It proves Renault Sport still knows what it’s doing after several blips. This almost doesn’t feel like a 2019 car, its roots harking back a decade and its mechanics-over-tech approach making it feel a bit old school.

Gloriously so, in fact. This may be a Renault hatchback that’s priced against a Porsche Cayman GT4, but the two speak exactly the same language, just with different accents. It’s a thoroughly welcome return to form. Let’s hope the engineers of the standard, £30k Megane have been peeking over their colleagues’ shoulders, furiously copying their homework.