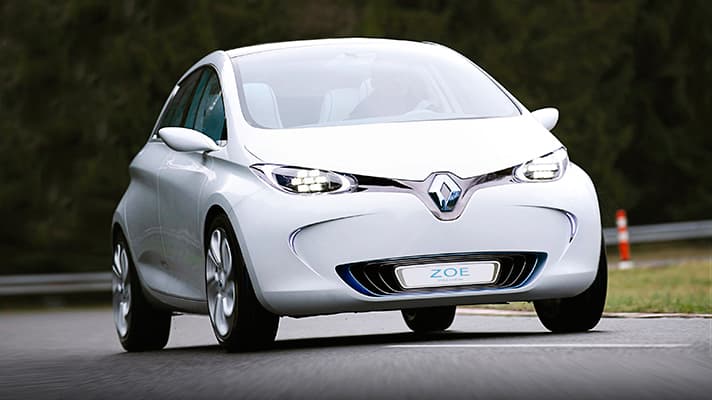 Talk about forging your own path. While other carmakers are shunning pure electric vehicles in favour of plug-in hybrids, Renault is doggedly ploughing ahead with its electric-only plan. In a strategy that makes George Osborne look flexible, there are absolutely no alternatives or plan Bs.

The Zoe is the latest to launch, and it should be the best 'leccy Renault because it was only ever conceived as an electric car. The supermini-sized Zoe has a single motor driving the front wheels, producing 88bhp and 162lb ft, and a real-world range of 90 miles - not bad for a pure EV.

Because the Zoe was designed as an electric car, Renault has been able to mount the batteries under the floor. This means that all 290kg of them are nice and low, which helps the centre of gravity, but, equally, there's no getting away from the fact that they weigh 290kg. That's a lot of weight in a supermini. It boosts the Zoe to a portly 1,468kg, so it's little wonder it can only manage 0-62mph in 13.5 seconds.

But because the Zoe's torque is available from zero rpm (like all electric cars), it actually feels quicker than the figures suggest. And it's not only around town that the Zoe feels perky - even at motorway speeds, it doesn't struggle to keep up with other traffic, and it's far more responsive than you'd imagine.

The problem is that the Zoe isn't especially comfortable - the firm springs make short bumps reverberate into the cabin. It's not a back-breaker, but because it's electric and near-silent, you notice these foibles more than in normal cars.

At least it's practical, though. Again, thanks to where the batteries are mounted, the boot is a decent size and the rear seats are roomy enough for small adults. The Zoe also comes with Renault's latest multimedia system as standard. You can download apps for it, TomTom's latest satnav is included and it even tells you what the external pollution levels are like. Good to know, and contributes to the sense of smugness.

It all adds up to a decent effort from Renault. The Zoe is cheap - prices start from £13,995 with the government grant, while the battery hire is from £70 a month - and the range is as good as any other electric car.

But does it fundamentally change the green-car agenda? Nope. Despite Renault throwing in free installation of a home charging point, the Zoe doesn't solve any of the wider electric infrastructure problems, nor does it offer a solution to range anxiety. Plug-in hybrids do. And that's still where we'd head if we wanted to be green.