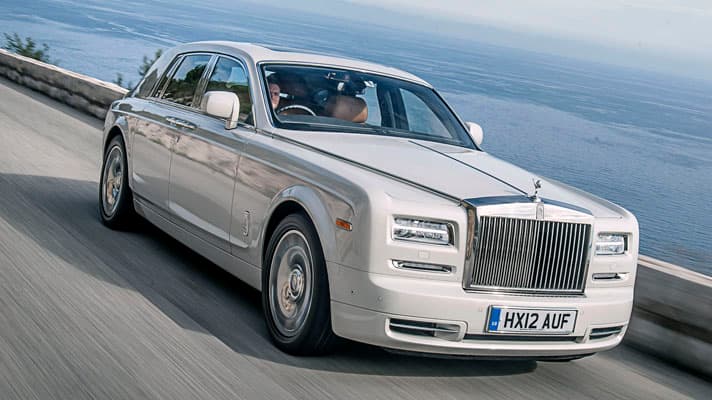 To Rolls, the introduction of the Phantom II is a series of ‘feature-led enhancements'. To everyone else, it's a facelift.

And a very evolutionary one at that. Rolls freely admits that it hasn't altered the look of the Phantom much, and who can blame it? Customers have said they love the look of the old car, so Rolls doesn't want to upset the apple cart. Plus, if the new car doesn't look massively different, then recent Phantom I buyers don't appear ‘so last year, dahling'.

The most obvious difference is that the round front fog lights have been dropped and replaced by thin strips. This new headlight design has allowed Rolls to fit the latest LED tech, so the lights now peer round corners and are fully speed-adaptive.

And, if you look really carefully, you'll also see some cameras dotted around the body - parking cameras have never been available on the Phantom before - but other than that it's business as usual. The Phant was a big brute before, and it still is.

There are mechanical changes, though. The chassis has been slightly stiffened up, and there's a new, eight-speed gearbox. We like this very much. It's hardly like the old six-speed 'box was clunky, but it's now super-smooth, slipping between the cogs imperceptibly.

Other than during kick-down, you never feel a gear change. Coupled with a new rear differential, this has improved fuel economy and CO2 by 10 per cent. Mind you, it still only manages 19.1mpg, so it's unlikely any oil company will be too worried about a drop in sales.

Rolls has also added a Dynamic Package to the Phantom saloon, again in response to customer demand, which costs £10,890. This includes some extra bracing to the chassis, stiffens up the suspension slightly and alters the gearbox settings. Frankly, we wouldn't bother. It doesn't transform the Phantom into a sports car, but it does mean it comes with a modern, thicker steering wheel. Rubbish - a Rolls needs a thin one, just like they always have had.

Other changes include a more up-to-date satnav system - the first-generation iDrive has been changed for the simpler, modern one, and there's now full USB connectivity. As ever with Rolls, this tech is all hidden away, but it needed to be there - the last Phant was starting to feel dated. The new car doesn't. It's up to date, yet still a Rolls.