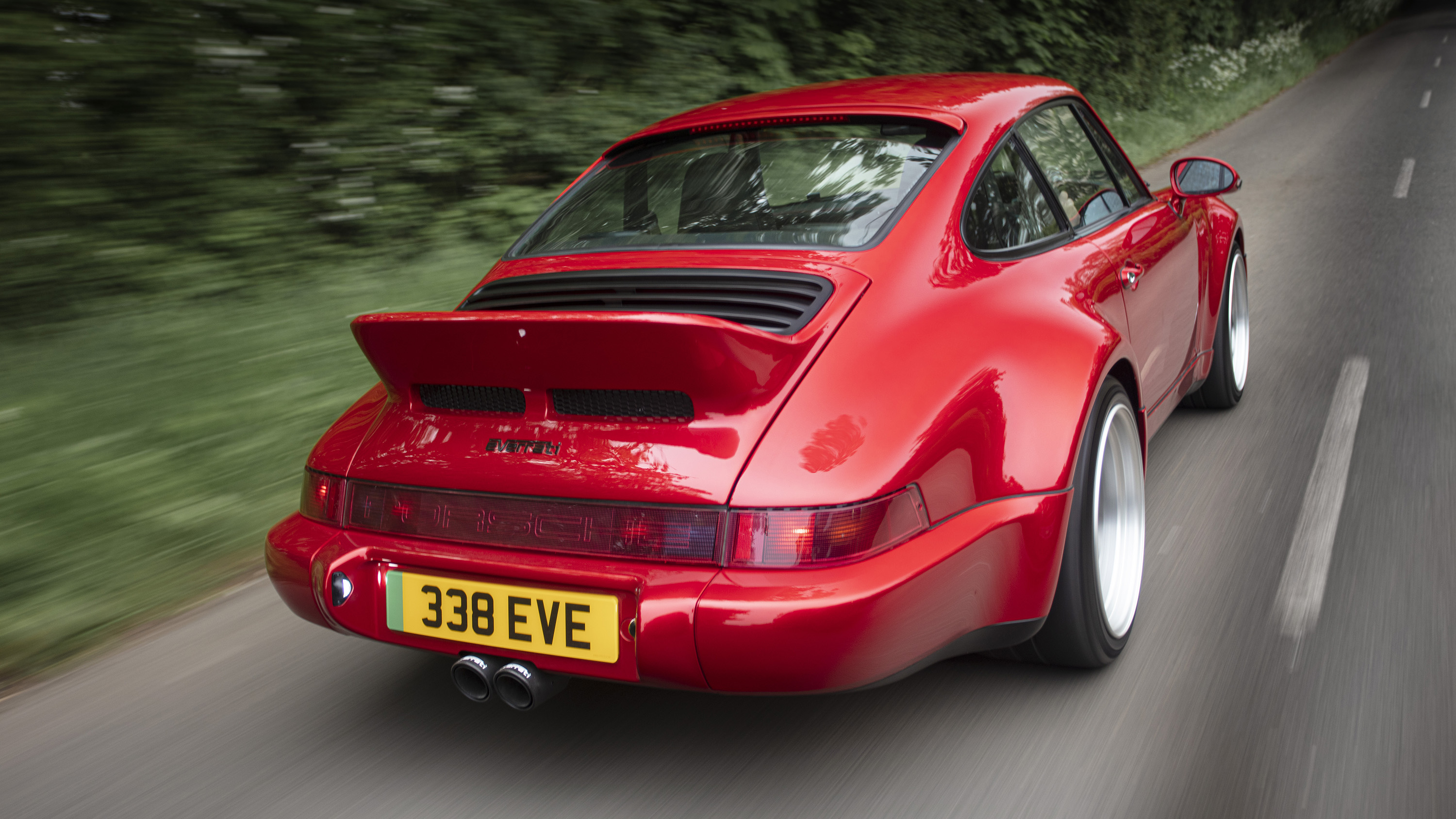 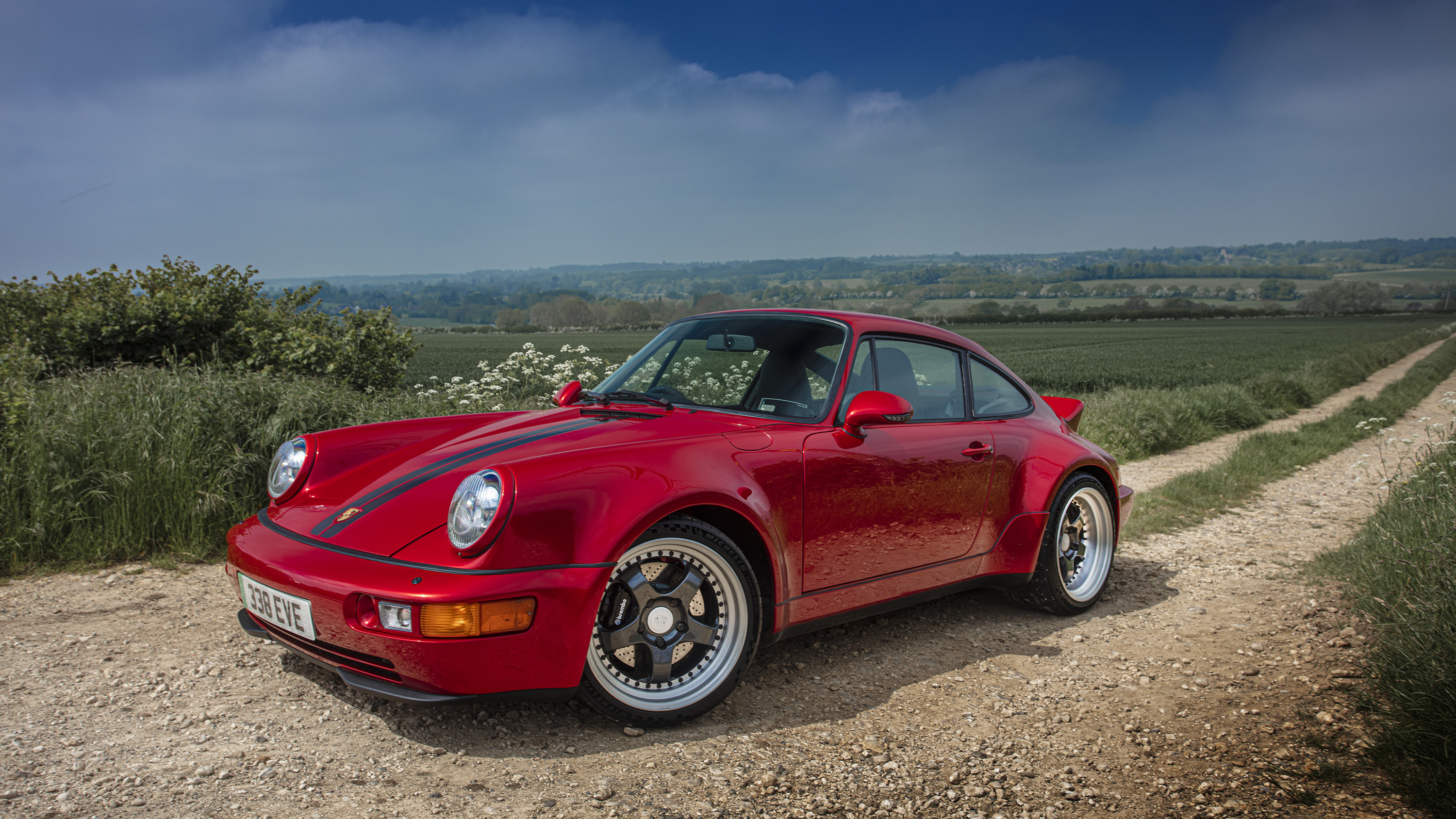 “Everything we do is reversible,” promises Justin Lunny, the founder of Everrati. Clearly it’s not the first time he’s been asked how contentious it is surrendering a perfectly tidy Porsche 911 to the EV cause.

“We’re updating them but we’re not ruining them. If somebody so wishes we allow them to have their engine, package it up and put it in storage or a mancave. But if we achieve what we’ve set out to do, we’ll still make these cars engaging and fun. Though it’s a different experience by definition.”

So what am I looking at?

The car you see here is the Everrati Signature. Not the company’s first fully electric 911, but the first that’s not a heavily hacked around development car. All (for now) will be based on the 964-generation of 911 from the late Eighties and early Nineties. You can buy a Pure, based on a narrow-bodied 964, or a Signature – like this – with the punchier wide body and with much more customisation available.

You either provide your own 964 or choose which shape you want – coupe, cabrio or Targa and narrow or wide body – then lasso Everrati’s chunky contacts book to source a fitting example. Handily, the only ‘must have’ is straight bodywork – everything else gets fixed or binned. The car you see here was a less desirable Tiptronic auto, for instance, perhaps quietening any cries of sacrilege.

Your car’s then put on the scales – so that the engineers know how best to distribute power modules to replicate its weight distribution – before being stripped, restored and readied to subsume a reconditioned Tesla motor (but brand-new batteries) where there used to be a flat-six petrol engine.

“I don’t think these are people who just want to get on the bandwagon,” says Justin. “They want to be embracing electricity and sustainability but in a way that’s unique and customised. They genuinely love cars; we will have succeeded if we get petrolheads to view this as a good idea. We get people who’ve had Teslas for ten years and now want something to enjoy at the weekend.” Several are figures in the public eye, he says. It’ll be more credible than the celebrity Prius movement, that’s for sure.

Justin’s own weekend toy is a Ferrari 812 GTS, but his conscience is tugged at by kids terrified of climate change and he drives a Taycan every day. More interesting is that Everrati’s Director of Engineering – Mike Kerr – is a 964 nut. He’s been fettling his own for 20 years but is increasingly tempted by the sizeable performance jump from morphing it into an EV, the doubling of its power retaining its handling traits.

So they’ve not ‘improved’ it?

Indeed. Everrati hasn’t used this as an opportunity to smooth off the infamous edges of older 911s. It’s retained them, with no electronic nannies to help keep its modern-day GT3 power level in check.

As standard, you get coilover suspension which Mike & Co will tune to your own tastes. Go for the Performance Pack and that’s upgraded to an electronically adjustable system with a dizzying amount of choice; former BTCC champion Tim Harvey has been part of the development team and when I’m offered his setup – softer at the front, stiffer at the back – I say yes in order to appease my indecision.

And get on with driving the thing…

Quite, though it isn’t the work of a moment. Time in any 964 is a very tangible demonstration of how 911s may look broadly as they always have, but the evolution beneath the skin is vast and ongoing. The pedals feel as wildly offset as a Seventies supercar’s, making me thankful there are only two of them to worry about. The steering is power assisted but barely. And there’s so much noise and hubbub despite the fact the powertrain has its finger pressed to its lips.

Electric powertrains have matured at the same time as interior tech and luxury, so we associate them with supremely hushed travel. But retrofit one to a car with 30-year-old cabin ambience and a visceral experience remains joyfully intact. There’s plenty going on to distract you from the lack of traditional boxer soundtrack.

Ever-present NVH cancels out any urgent need for the active sound system that Everrati has developed, adjustable via a phone app to pipe some faux-flat-six chunter through a set of speakers. Rather like the reversibility of the powertrain swap, it’s a bit of a psychological safety net to help calm the nerves of those spending 250 big ones making the jump to electric. But I quickly turn it off.

Hows does it handle?

With modern 911 power in a 1991 chassis (and no ESP on duty) it’s hardly like I need my senses heightening more than they already are. Putting the power down isn’t actually scary – this is inherently a sorted chassis and the tyres are modern and wide – but with rear-wheel drive and no helping hand this naturally isn’t an EV where you get tucked into a corner and just mash the throttle, careering out at high speed bemoaning it’s all a bit one-dimensional.

You’re aware there’s a lot that could outfox you here, just as there would be in a manual 964 with half the power channelled through skinnier tyres and more antiquated suspension. It’s traded its heart but kept its soul.

It’s an exciting and occasionally breath-taking place to be, communication pouring through each control and every millimetre of throttle or steering angle you apply very vividly influencing your progress. Adjustable regen is built into the brakes but while it’ll operate as a one-pedal car in traffic, the system backs right off at speed so you shed speed naturally into corners. Which is exactly what you want in a heavy-rumped 911.

In fact so impressive – and involving – that I don’t once crave the extra challenge of perfecting some manual downchanges amongst it all. In time, and acclimatisation with the chassis, maybe I would. But Everrati is working on that too, its next project (a car almost certain to ignite the comments sections) due to feature augmented sound and simulated gear changes as switchable features. It’s something Mike developed at one of his previous employers, replicating the torque curves and power interruptions of a seven-speed transmission on an EV engineering buck.

Indeed, ‘the next project’ is already the Everrati catchphrase before even a single Signature has been delivered. In-house powertrains will follow and several iconic classic cars percolate through off-the-record chats while – like at Lunaz Design – a blank cheque and a dream can get you something properly one-off. Someone’s even proffered a delivery-mile Porsche 959 which Everrati has, very good naturedly, declined to electrify. Like them or not, EV classics are here and only expanding in number. But it’s nice to know they’re in responsible hands, huh?