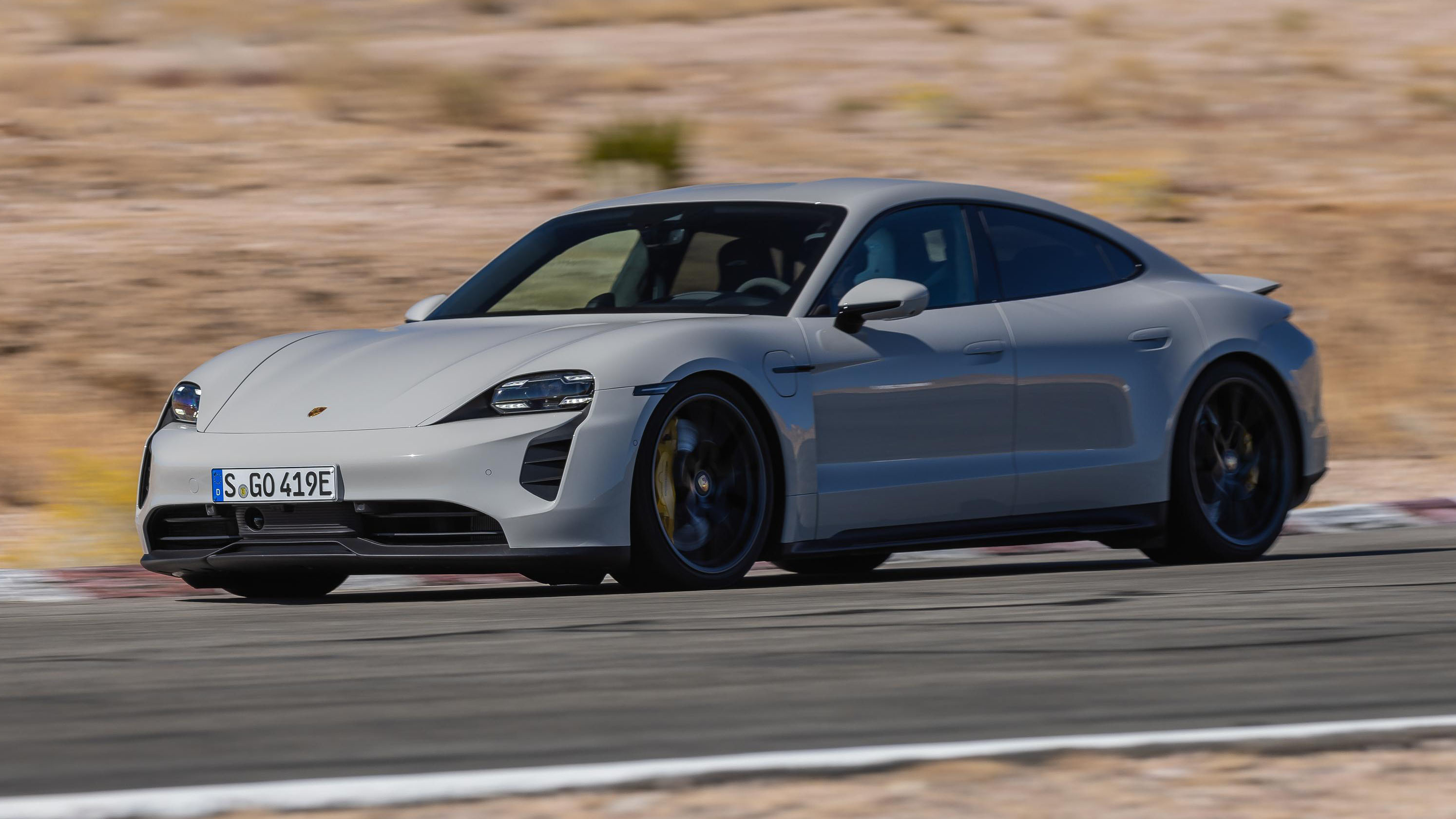 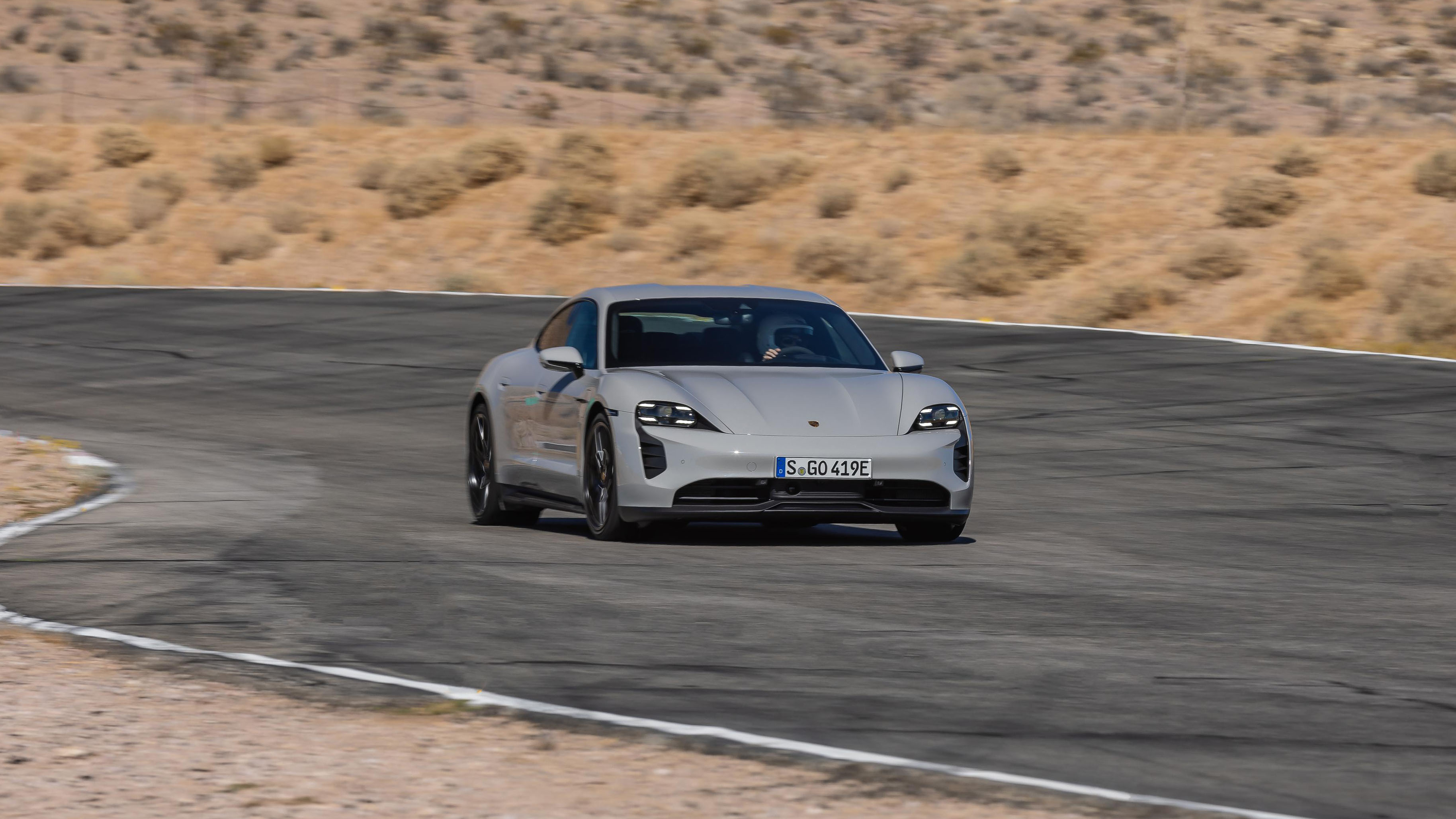 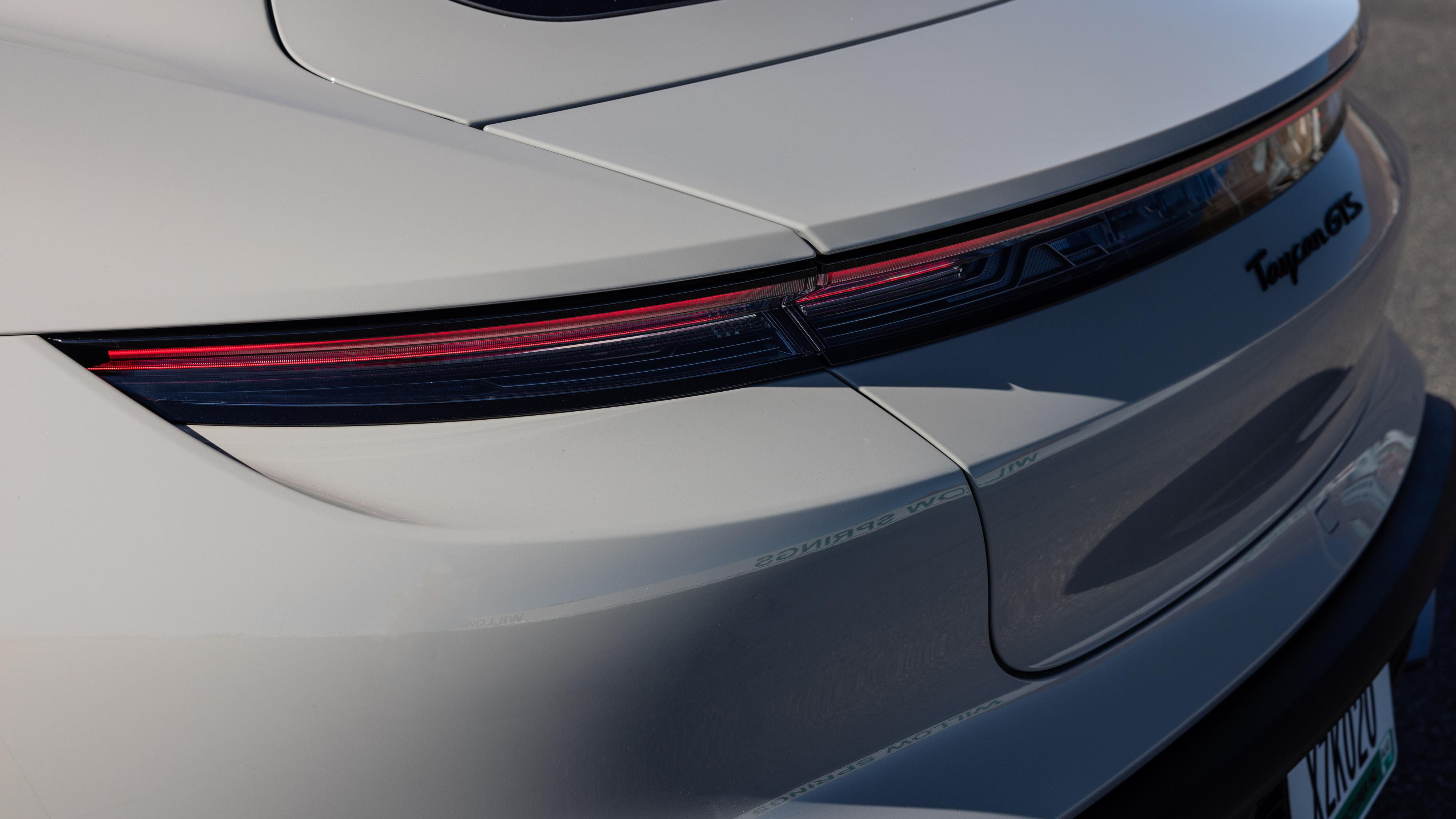 In terms of positioning, absolutely nothing, the £104,190 Taycan GTS slots into the range above the 4S and below the Turbo. But there’s more. This is the stiffest and sportiest Taycan of all. Not as fast in a straight line as the Turbos, but with 20 per cent more roll stiffness. This is the Taycan for track day enthusiasts.

But not for long, eh? How long are the battery and tyres going to last?

These tyres – regular Pirelli P Zeros – actually lasted way better than I expected given the abuse they were put through. We were driving at Willow Springs in California and Porsche claimed they were only switching the tyres over every two days. However, I did work out that was probably less than 50 laps of running around the 2.5-mile track.

The battery would be dead in much less than half that given I got through 35 per cent of it in eight laps. The Taycan GTS recharges very fast (just 22 minutes from five to 80 per cent), so it hoses back in faster than I managed to get rid of it.

Provided you’ve got a 270kW fast charger at your circuit…

Indeed. I pity the tyre manufacturers, though. They’re being asked to clean up their particulate emissions (i.e. producing harder wearing tyres), while being confronted by a barrage of ballistic performance cars, none under two tonnes, that demand, no, need more grip to control the ever more bonkers power outputs.

You digress. Let’s get back to the Taycan GTS, shall we?

OK, just making the point that no matter how capable, electric cars are not natural track warriors. But this one copes way better than any other I’ve driven. It works those tyres evenly, feels balanced and controllable and more secure on its feet with tighter body control than any other Taycan. And therefore any other electric car.

Willow Springs has long, heavily loaded, very high speed, tyre-tearing corners and around them the GTS has impressive grip and poise. You can alter your line smoothly with the throttle, and it’s only through the off-camber downhill corners that the nose pushes wide at all. Turn Seven - ‘The Sweeper’ - is surely one of the wildest corners around, I’m turning in almost flat out at 130mph and yet have full confidence in the chassis and steering. There’s not that much feel through the RaceTex rim, but the GTS feels like it’s connected to the ground by magnets, so stable and hunkered into the tarmac is it.

So if you want a driver’s Taycan, this is the one to have?

Yeah, with the proviso that I didn’t get to drive it on road. Willow is bumpy and the GTS is positive, so the gains do feel like they’ve come at the expense of ride comfort – it’s up to you if that’s a trade off you want to make.

It feels very different to a Cross Turismo, that’s for sure. The high-rise estate Taycan is more languid and I still reckon it’s the best machine in Porsche’s e-range , the smooth suspension complementing the powertrain and demeanour best.

It’s not much different to the others really – it’s just got extra black outside, plus a Sport Design Pack which has reshaped the front, rear and side skirts. The black wheels are unique to the GTS though. The lightest fitted to a Taycan, they’re also available on the Turbo versions but not in this colour.

In other news, the GTS has a specific ‘engine’ note. Actually let’s just call it as it is – it has a different backing track. It’s also louder than in other models. You aren’t massively aware of any of this. Want the vibe, but more space? The Sport Turismo will be along shortly. Only £800 more and available as a GTS. You’ll be reading about it here on 14 December.

Is it notably slower than the Turbo?

The figures say yes. This hits 62mph in 3.7secs where a 671bhp Turbo takes 3.2 and the 751bhp Turbo S is done in 2.8. In practice this is oodles fast enough, its 0-100mph time of 7.9secs putting it on par with Audi’s RS6, BMW’s M3 Competition (non-xDrive version), and Porsche’s own flagship Cayenne, the Turbo S e-Hybrid. It was only on Willow’s long, slightly uphill pit straight once above 130mph that the impact lessened off much.

The GTS uses the Turbo S’s motors, but because it’s less powerful (510bhp, or 590bhp with overboost during Launch Control starts) than the 751bhp flagship, it actually sends more power to the rear wheels more of the time than the Turbos. The algorithms that control the torque distribution bias the rear motor slightly more. And you do notice. The 626lb ft  GTS feels more rear drive through and out of corners, is able to exit on a tighter line.

If you’re the type of person who appreciates this, it’s probably worth knowing you will need to add some options to your GTS to get it fully up to track max. 4WS (£1,650), joins other such track focused bits as the £6,321 PCCB Ceramic brakes and the £2,315 PDCC Sport active anti-roll on the extras list. PTV torque vectoring and PASM active suspension management are both included though.

Is the GTS any lighter than the Taycan Turbo?

Not even a solitary kilo. It might be fitted with the lightest wheels, but Porsche says it weighs an identical 2,295kg. If you want to lose weight, have the 150kg less massive 4S.

So the range is exactly the same as well, is it?

Funnily enough, no. Porsche has run some software tweaks to make the motors and batteries talk to each other more efficiently, the result being this is the first Taycan with a range of over 500km (311 miles in old speak). And yes, this update will be included next time your Taycan goes in for a check-up. But because Porsche doesn’t want to go to the time, effort and expense of putting all its cars back through the WLTP test, other versions will always claim less range.

How’s the Taycan selling around the world?

To the end of September this year it’s outsold the 911 (28,640 plays 27,972). But it’s still only Porsche’s third best-selling car behind the SUV pairing that is the Cayenne and Macan. Each of which has shifted upwards of 60,000. Interestingly, if California was a country it would be the Taycan’s fourth largest global market.

Oof. How far behind does the UK lag?

It doesn’t. Somewhat unbelievably it’s the world’s second biggest Taycan market after China. Which means us Brits buy more Taycans than either America or Germany (and yes, this does imply that almost all American Taycans go to California). The Taycan is now the the UK’s best-selling Porsche ahead of the Macan.

Don’t go congratulating yourself for our progressive electric attitude just yet. Porsche is rational, and knows the reason the Taycan sells so well here is purely down to government incentives, specifically the electric car tax breaks available to business users. If those change for the worse, sales will fall.

Is it the Taycan to have?

I’ve pretty much covered this already, so I’m assuming you’ve just scanned to the end. Sigh. It’s the most dynamic Taycan. If that’s what peels your onions. But no. For me the Taycan works most harmoniously when it’s smoother and softer. Cross Turismo FTW.