£874 p/m
External link to
with Leasing.com
Read why you can trust our independent reviews
Top Gear Team
Published: 27 Apr 2021
Skip 15 photos in the image carousel and continue reading 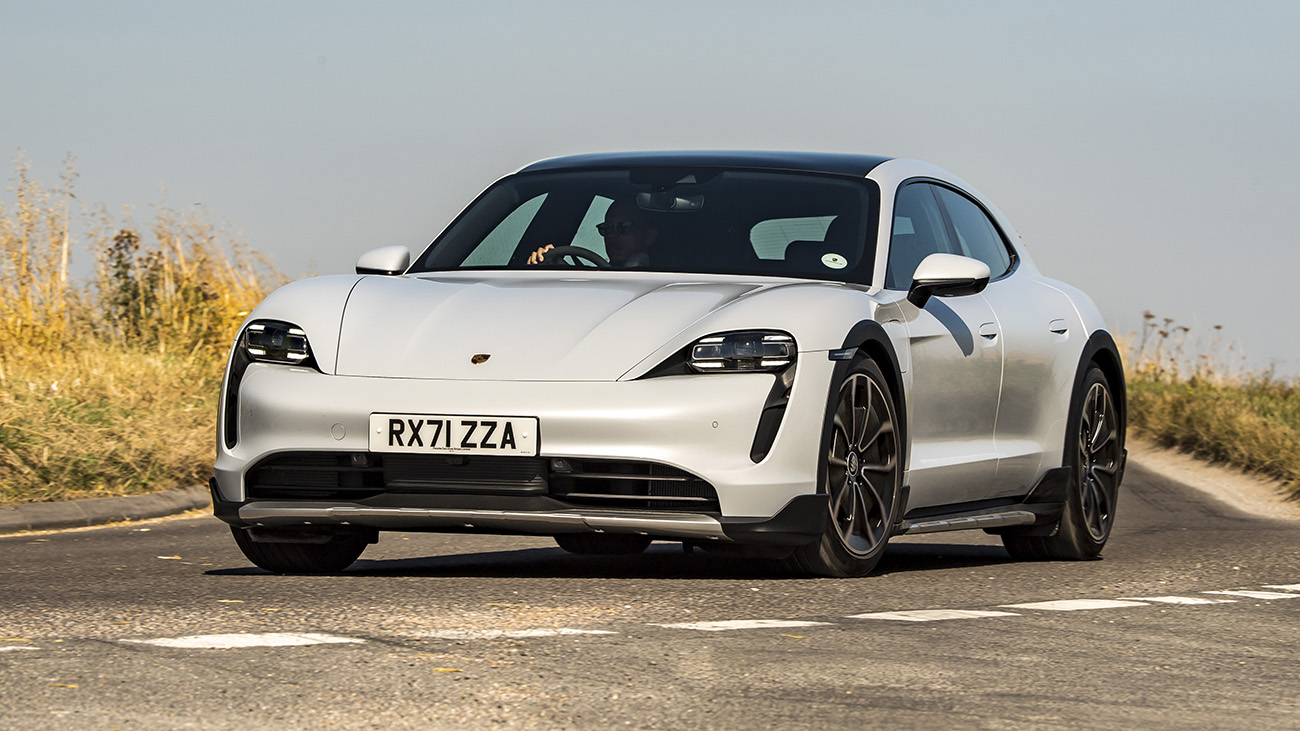 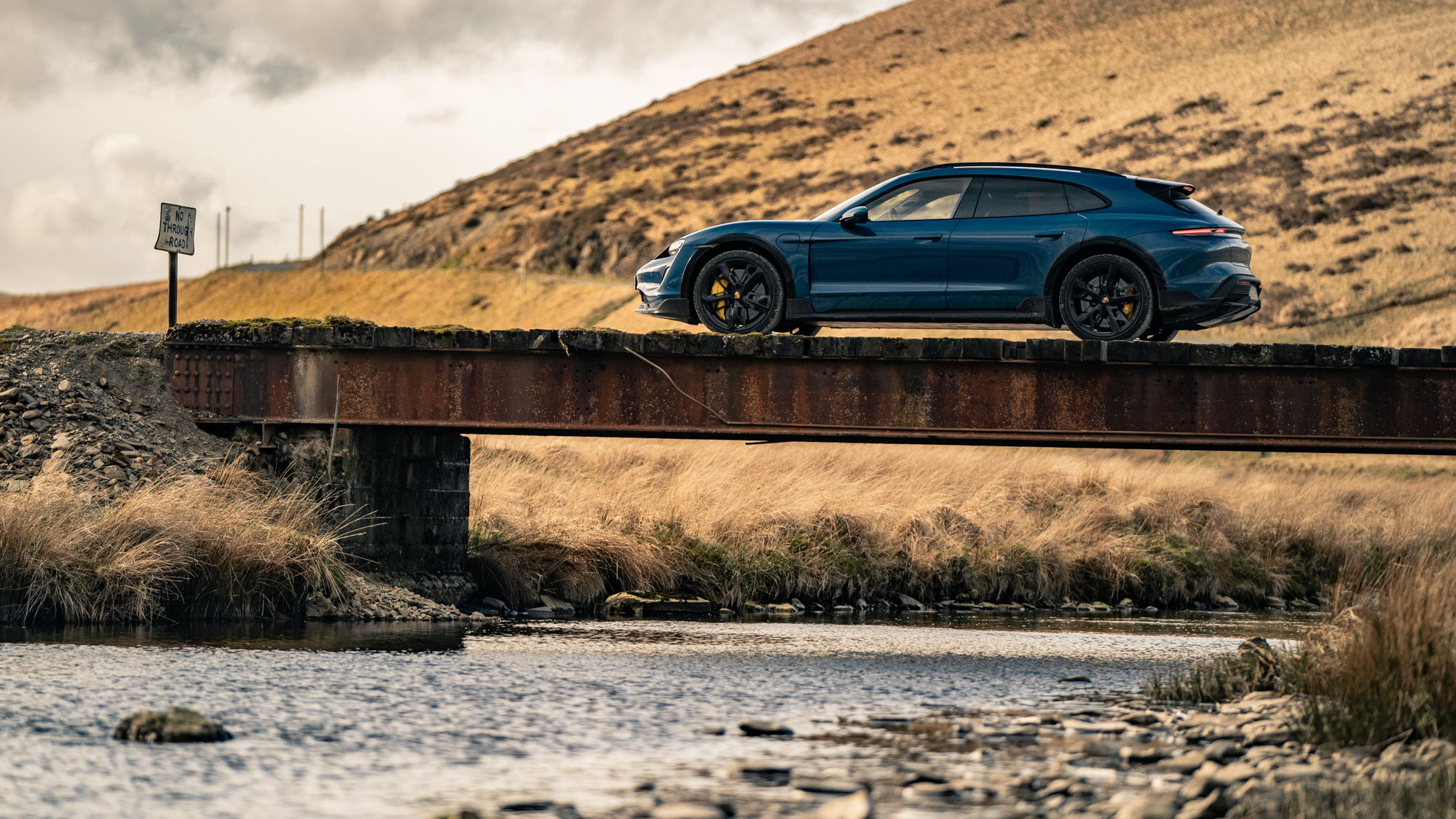 1 / 15
Advertisement
“The most complete fast estate available today. And perhaps the best electric car, too ”

The second step in Porsche’s electric strategy. We’ve had the Taycan, this is its crossover cousin, the Cross Turismo. Think Audi Allroad and you’re spot on. In due course there’ll be a Sport Turismo along with the same estate-y features, but without the extra ground clearance and body cladding.

So it's a Taycan, but estate-ified?

Mechanically, the Cross Turismo is largely identical to the Taycan. Same 93.4kWh battery slung underneath and powering the same motors with the same power outputs across the same four-strong model range (4, 4S, Turbo & Turbo S). Even the same suspension (double wishbone front, multilink rear) with adaptive air springs and four-wheel steering (not as standard on all models – Porsche knows how to upsell customers all too well). The raw changes are limited to new wheel mounts, strut supports and a revised self-levelling system.

Plus the bigger boot. In terms of raw capacity its 405-litre load bay is not in the same league as an E-Class wagon (640 litres), but it does give the Cross Turismo added versatility over the regular Taycan even though overall length is only up by 11mm. The rear seats get no more legroom, but the impression of space is boosted hugely by an extra 36mm of headroom.

It must be heavier though, surely?

Weight has only increased 25kg, but a 2,320kg estate is still very weighty, no matter how low slung it may look (at 1,409mm tall it’s lower than a BMW M3). The three-chamber air suspension fitted to the higher ranking Cross Turismos lifts the body by up to 30mm, and Porsche has thoughtfully added a Gravel mode that also adapts the torque distribution, throttle response and, in their words, gives the Cross Turismo “increased Bad Road Capabilities”. The capitals are theirs, so they must mean it. You can also spec a £1,161 Off-Road Design Package which gives you those little flicks fore and aft of each wheel to protect from stone impacts and the like.

At £79,340, the entry level Cross Turismo is priced nearly £10 grand above the basic Taycan, but from there on the price gaps narrow as the equipment levels align more closely. The 4S Cross Turismo is £88k, the Turbo £117k and the Turbo S £140k. The power figures read as follows: 470bhp, 563bhp, 671bhp and 751bhp – but note these are only available in Launch mode. In regular driving it develops around 80bhp less depending on model – in fact both Turbo and Turbo S develop the same 625bhp.

Crikey. It must be quick...

None of them are slow – 0-62mph times sit in a range between 2.9secs and 5.1secs. The question of range itself? The Turbo S is the least efficient at a claimed 241 miles from the 84kWh usable portion of its battery – about 2.5 miles from each kilowatt of charge.

The rivals it competes against are not other electric cars nearly so much as other fast estates. In terms of handling, reward, versatility, comfort, price and ethos the Cross Turismo is much more aligned to the Audi RS6 and Mercedes-AMG E63 than to anything electrically powered at the moment. You could argue – and we would – its closest rival comes from within: the Panamera Sport Turismo.

It’s fair to assume that given the Audi e-tron GT is built on the same bespoke EV platform as the Taycan, it’ll be making similarly extensive use of it in due course. Until then, this occupies a unique position in the market. And occupies it very convincingly indeed. 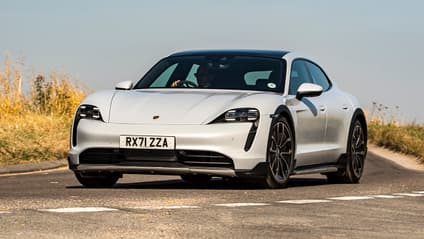 “The most complete fast estate available today. And perhaps the best electric car, too”

The Cross Turismo is the most complete fast estate available today. Not the biggest or most practical by a long chalk, but in terms of its breadth of ability and fulfilling the role it sets out for itself, it is brilliant. We’d have it over an Audi RS6 or any Panamera. Only the rowdier E63 could possibly tempt us to the petrol side.

More than that, it’s a better car than a regular Taycan – marginally blunter to drive, but moving away from a purer sporting focus serves the Cross Turismo well. Similar underneath they may be, but this is a different car in terms of outlook, ability and ethos and further distanced from the four-door than we expected. Its comfort and dynamic range is dazzling, it comes across as even more thoroughly developed and capable. Porsche has moved the game on. Not cheap, but quite possibly the best electric car on sale today.