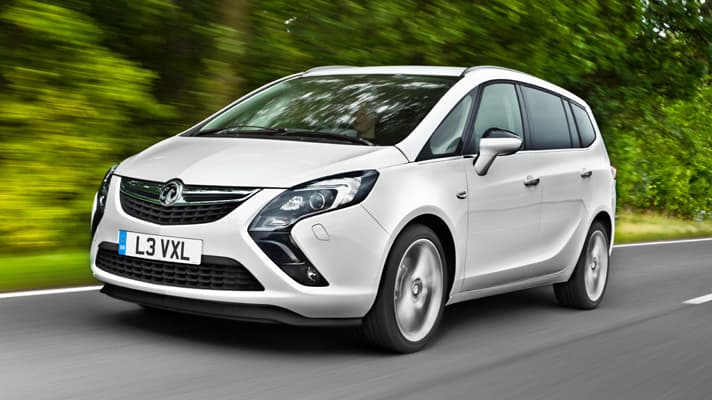 The way Vauxhall tells it, the Zafira Tourer isn't the new Zafira. This is an extra model that sits upmarket of the Zafira, they claim. The car industry occasionally tries this trick. Renault has done it a couple of times with the Clio. Leave the old one struggling on as a base model, until everyone loses interest. They hope by this time that the new one will have fixed itself in our minds as something posher.

Why pretend? It's a very good replacement for the Zafira. Sure it's bigger and plusher, but that's the way with pretty much any new model of anything these days.

The Zafira Tourer looks good. That new Vauxhall nose, with the black ‘boomerang' sideburns housing the headlights and fogs, has turned up on a few show cars now and it works well on a real-life road. Other swooshes liven up the bodywork as you move further back. There isn't the roof slope of an S-Max, but even so this is an MPV you can drive without a paper bag over your head.

As before, there are three rows of seats, and one by one all of the rearmost five seats fold flat into the floor for those times when you unexpectedly find you've bought four sets of wheels and tyres for your single-seat racing car and need to get them home. Or you're rubbish at building flatpack furniture so buy the ready-made stuff.

The new trick this time is that on most trim levels of Zafira Tourer, the middle row isn't a bench but three separate seats, and they all slide and recline to individual taste, so siblings needn't argue. Besides, if there are only four people in the car, the outer two mid-row seats can slide inwards (to clear the wheel-arches) and then miles backward, for huge legroom. Vauxhall makes a big play of this feature, but several cars have hard it before and buyers don't seem to care.

Anyway, pretty much however you configure it, this car is seriously big, not just in middle-row legroom but in the boot too.

Big means heavy. I drove the top engine version, a 2.0-litre 165bhp diesel. It was no sprinter, and I was alone. I'd imagine that if you fill this thing with bodies it's really going to struggle. And the lower-power engines will demand the patience of a saint.

Still, you won't need to slow down for corners - the chassis is predictable and the steering's progressive if short on feel. It's not a huge lot of fun. But it's easy to be smooth, and if you've six passengers around you, you don't want to be making them sick.

The ride's a bit jiggly if you travel alone, especially as I was travelling alone upon 19-inch wheels. I hope smaller tyres, especially with the optional adaptive suspension, might be better, and certainly adding cargo would smooth it out. Vauxhall's rides are usually OK.

So forget the Tourer name, Vauxhall, and don't be shy about this car. MPVs are a sociable way of getting people and stuff around the place. Even if they aren't the stuff of TopGear magazine covers, at least until Porsche builds one. (As an aside, the way Porsche is diversifying into saloons and SUVs these days, maybe a twin-turbo V8 4WD MPV is next, but don't take that to mean we know anything you don't.)