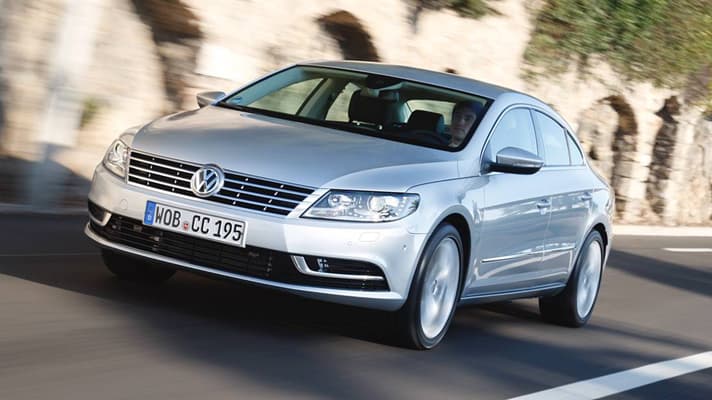 It's been said often enough, including here, that the new 3-series in an almost unimpeachably brilliant thing to drive. It won't be long before it's going to be on every street. Its owners will be the knowing who've read our reports, and the unknowing who just get a BMW because so many other people do - so it must be the right thing mustn't it.

But what if you don't want the BMW or A4 - because they're too boxy or just too everywhere, and thousands more expensive - but you do want a saloon? Or rather, need a saloon, because you need the doors and boot, or because your company car policy tells you to. Well then how about the VW CC.

Passat CC no more. It's now a model on its own: the Volkswagen CC. Well yes, but it's still a facelifted Passat CC, which means it's a Passat in a fancy frock.

Not a whole lot wrong with that though. The Passat's a fine car, and this is a fine frock - curvy, arch-shaped and yes, throwing a grateful nod in the direction of the Mercedes CLS. For the facelift, the VW corporate nose is grafted on, mercifully without looking like an afterthought.

There's no change to the chassis. This means that for maximum steering delight on a snaky road, you'd rather be in a 3-series. But the CC has a fair bit of feelgood, especially on more open A-roads. The car just goes where you guide it with minimum fuss. (If you want a sporty VW, jam your kids into the back of a Scirocco).

The CC feels tightly hewn together, tautly damped, and still manages a decently pliant ride. I was in the adaptive-damped version, but the suspension isn't actually altered from the old car, and that was OK on standard dampers so there's no reason it wouldn't be with this CC.

The deep buckety seats feel like they've come from a much grander GT, and the cabin furniture sweeps around you more snugly than in a saloon. The roof and pillars get more intimate too, reinforcing the coupe feel. There's plenty of kit: sat nav, DAB, climate and xenon even on the base spec.

Engines run to the predictable VW quartet of 2.0TDI in 140 and 170 outputs, and turbo petrols in 1.8-litre 160 and 2.0-litre 210. The V6 version has been killed in Britain - no-one bought it. To be honest, unless you're forever loading up, the 1.8 petrol is plenty. It's sweetly happy to spin to big revs. It's also a lighter engine than the diesels and the whole car feels more lithe than the diesel. But the diesel's no chore, especially since the facelift car has had a whole new wodge of soundproofing.

So you end up with a smart, refined brilliant cruiser that looks and feels more special than it has a right to. The change of name is the biggest thing about this facelift, but hey, they really didn't need to do a whole lot.