£22,465 when new
Read why you can trust our independent reviews 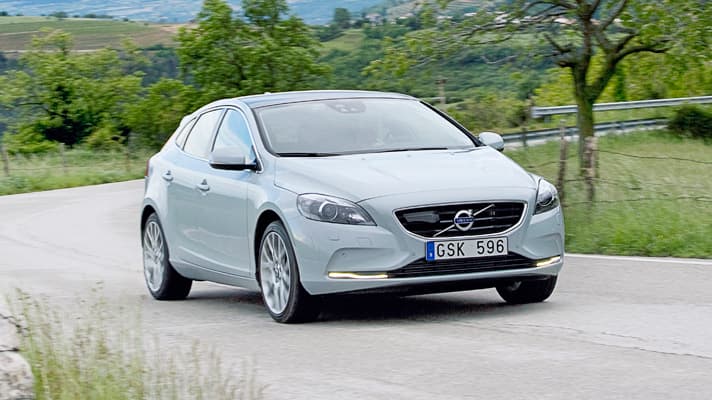 Posh hatchbacks are big news in 2012: we've already had a refreshed BMW 1-Series, Audi has launched the new A3 and the reborn Mercedes A-Class is due in a couple of months. But the Germans might not have premium practical as sewn-up as they think, thanks to this, the new Volvo V40. And it's good news from the off, because the small Swede makes an excellent initial impression, with plenty of stylish sweeps and angles that make it look more interesting than the hatchback norm. The low bonnet (possible due to a pedestrian airbag negating the need for an underbonnet void), scraped-back windscreen and low roof give it more attitude than the usual sit-up-and-beg hatch, and there are some typically strong Volvo feature lines running along the flanks for extra purpose. The rear is full of character too, making for a good-looking car in a sector dominated by the relentlessly practical-looking.

The D2 will be the key to sales, with 94g/km and 78.5mpg appealing to fleet buyers and privateers alike. Which is to miss the point slightly, because the V40 offers much more than papery stats, and the feeling arrives as soon as you drop into it. The interior is technical, crisp, solid-feeling and very Scando-Volvo, making good use of configurable digital TFT dials (a 350-quid option) to display info and to flip between driving modes (Elegance, Eco and Performance). You sit low and comfy, and, although you lose some room in favour of an interesting exterior shape, it's a small loss.

Similarly, the drive is tidy and competent rather than a revelation. The steering and brakes are well up to the job of smooth progress, and the ride is superb. The engine burbles happily away, never broadcasting its dieselly nature past a gentle thrum, and although it loses interest above about 3,500rpm, there's enough torque to keep up with traffic. So it's not quick, but it potters like a pro, the manual 'box neat and accurate. Possibly the most relaxing car to drive in the class, in fact, and it feels like a much bigger car in terms of refinement and solidity. Possibly thanks to a hefty 1890kg kerbweight.

Along the same lines is the sheer amount of stuff you can option on the V40. As far as safety systems go, it's a typical Volvo belt 'n' braces affair. Dual-stage front airbags on both sides, side airbags, a knee airbag for the driver, inflatable curtains, the WHIPS anti-whiplash system. If all the airbags go off at once, the change in air pressure will clear your sinuses out a treat.

There's an upgraded version of the BLIS (blind spot information system) that now also informs the driver of a car approaching from the rear, as well as objects in the blind spots; a lane-keeping aid; Park Assist Pilot (parallel parking for the hard of thinking); road-sign-info cameras; active high beam; adaptive cruise... treats stuffed into the smallish V40 without feeling forced in by the big-car crowbar.

There's more, though: the Cross Traffic Alert uses the rear radar sensors to alert the driver to cars/people/UFOs approaching from the sides when reversing out of a parking space, and the City Safety collision mitigation system now works at speeds up to 31mph. Now, City Safety is operated by that laser which sits in the top of the windscreen and auto-brakes the car when it judges that the driver will be too slow to react. It won't guarantee a miss, but it will lessen the severity of the impact. Good. The V40 also now has pedestrian detection that uses a camera and radar to figure out that a person at the side of the road might step out and warns accordingly. If the pedestrian makes a break for it, the V40 will slam on the anchors. Worth noting that the system has trouble detecting pedestrians under 80cm in height. All you 79cm-tall jaywalkers out there, be warned.

Mind you, if you do manage to get hit by the V40, you have a better chance than most of surviving. If a pedestrian manages to get nerfed, the rear edge of the bonnet releases and deploys an airbag that fills the area under the raised bonnet and roughly a third of the windscreen where a head might land. It might just save a life. Also good.

First impressions? It's worth noting that the T4 petrol auto we tried was a decidedly different experience, with a nasty rasp to the exhaust and a badly matched 'box. But generally the V40 - the D2 in particular - is a better car for being unashamedly a Volvo. It might not be an outright winner in any category, but come the comparison with other carmakers, it might be in with a chance of a points victory. Good stuff.