£ 50,450 when new
Paul Horrell
Published: 29 May 2015
comments
Skip 1 photos in the image carousel and continue reading 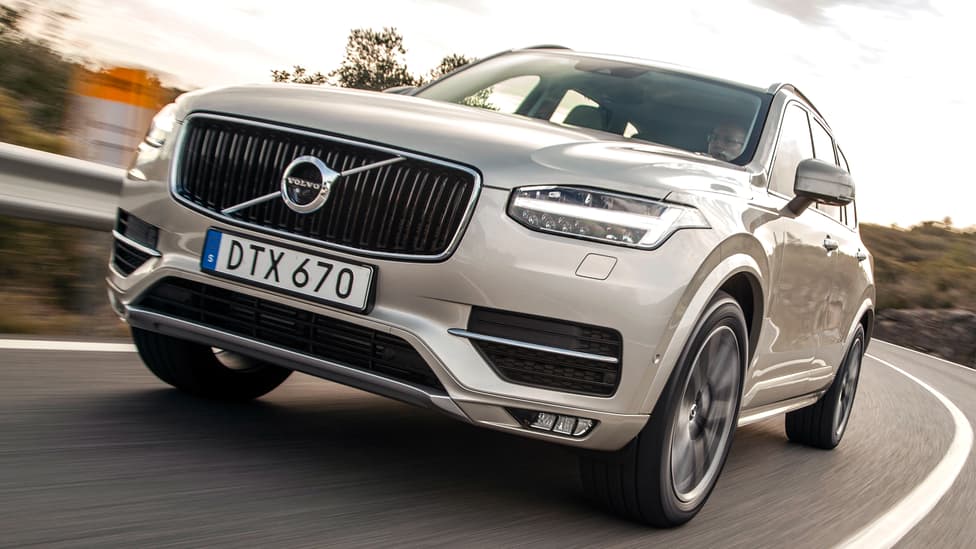 Every few hours, one of the world’s carmakers launches yet another big expensive SUV. And yet, even among this forest of rivals, Volvo’s new XC90 manages to carve out its own distinctive clearing. It doesn’t throw weight and cost at what would be for most buyers a superfluity of off-road ability. Or sacrifice comfort for equally irrelevant Nürburgring horseplay. Or lose space in pursuit of a silhouette aping that incongruous fashion, the sports utility coupe. OK, so you might think a bald list of the XC90’s main advantages doesn’t make terribly exciting reading: roominess, versatility, comfort, safety. Yet it follows those aims with such single-mindedness, humanity and warmth that I ended up finding it beguiling and desirable. There’s a nobility in the doing of simple crafts well and generously.

All of which could have been said about the old XC90 of course, even if it was grim to drive. By stealth – modesty is a Volvo trait – it became a phenomenon. It lasted 12 years in production, far longer than a normal mortal span. Yet, even to the end, it had a near-fanatical following among owners, for all the same reasons reprised and amplified by the new one. Few rivals managed to catch up on safety, and it recently breezed an American crash test that wasn’t even invented when it was new. That’s the value of Volvo’s long-standing studies of real-life accidents, and building cars to protect against them rather than building cars to pass crash tests. Despite its selling big numbers in Sweden all those years, it wasn’t until two years ago that anyone, anyone, was killed in an XC90 there. The accident in question happened when the car came off the road and slammed into a tree.

Volvo’s engineering chief Peter Mertens reckons the new XC90 would probably have averted even that catastrophe. It has a world-first system that, if you depart the road, spools the belts tight, tenses the seat around you, moves the brake pedal out of the way and prepares the airbags, protecting you against the bouncing and the final impact. The body’s safety cage is boron-steel and even more comprehensive than before. Plus, as standard, Volvo’s vehicle, pedestrian and cyclist detection system means that if any of those three veers into your path, it’ll brake if you don’t.

Actually I recently ran a long-term-test V60 that had this system. Not that you’d have known. It wasn’t mentioned in the spec sheet or brochure, and I wasn’t going to take aim at a cyclist to find out if it was fitted. Volvo has never relented in its pace of safety innovation, but for a while it’s been neglecting to tell people. Realising its safety image has faded, it’s shifting its messaging to remind us. Example: the XC90’s seatbelt buckles are stamped “since 1959”, because Volvo put the world’s first restraints in a car all those years ago. Even the base model contains all the sensors needed for active cruise control and near-autonomous steering, plus various side-alert systems, so it can be upgraded later.

To be clear: although the new XC90 is very much channelling the spirit of the old one, nothing material gets a second life. In fact, it’s about as new as a car can be. All-new platform, a suite of engines and transmissions developed especially with that platform in mind, and entirely new info-entertainment-connection hardware and software. All that’s left of the old car is the name – but actually they couldn’t resist redesigning even the Volvo badge.

Volvo had got into a mess when owned by Ford. A bewilderingly complicated mishmash of engines from several former partners sapped its resources and denied it freedom. When Volvo was put up for sale in late 2008, its people could have looked for new cooperations. But instead of risking repeating the farce, they decided to paddle their own canoe, and their new Chinese owners gave Volvo the freedom to invest in scratch-building a versatile platform and chassis. That provides for the XC90, plus next year’s big V90 estate and S90 saloon (they replace the V70 and S80), and within a couple more years the new V60, S60 and XC60. From that followed a more controversial step. They wanted to major on fuel efficiency, slash the costs of designing different installations and crash structures, and also allow for short front overhangs to please the designers. So they decided that the platform would never have to carry more than a four-cylinder engine.

The 2.0-litre aluminium four-cylinder is made as both a range of diesels, in single and twin-turbo configurations up to 225bhp, and petrols culminating in a supercharged and turbocharged unit of 320bhp. If that’s not enough, there’s a version called T8 Twin Engine. That ditches the propshaft to the rear, and fills its tunnel with a plug-in battery. At the back is an electric motor. Charge it up for up to 25 pure-electric miles, or switch to all-guns power mode for 400bhp and 4WD. A BMW i8 in reverse, if you will, for £59,955. Company-car heaven, it’s rated at 113mpg and 59g/km CO2.

The outside of the XC90 is refreshingly honest. The silhouette is boxy and glassy, because it encloses a lot of space and lends light to the people inside. I really can’t imagine this car with gangsta tints: it’s far more social than that. But it’s not too homely. The front face has a confident grille and rich LED headlights with signature T-shaped running lights. They call them ‘Thor’s Hammer’ but, to me, that sounds like the name of some ear-assaulting Nordic death-metal band, entirely contrary to the warm and civilised Scandinavian spirit that permeates the rest of this design. Especially the interior.

Oh, yes, the interior. It’s just brilliant. Clean of lines but soft of edges, rich but not flash in its materials, and for the most part terrifically usable. Two things define it: the seven-seat packaging, and the new big-screen interface. Seats first. They’re all as anatomically correct as, well, as a Volvo seat. And they all have space. Even the third row is OK for me as a just-shy-of-average adult male, so it’ll be fine for kids or grandmas (though the latter might have trouble making a dignified exit). The second row recline and slide. And, even with the third row in use, the boot is as big as a medium hatchback’s. If you need more, all the seats and head restraints fold with an easy tug of a lever.

Sensibly, the vast centre screen is portrait format, because that’s best for scrolling through lists, or indeed looking at a heading-up map (though, to get any sense of where you’re going, you should align the map north-up, shouldn’t you?). It’s a high-definition job, its menus reasonably logical and its response latency quick enough to be generally unnoticeable. Intuitive touches, swipes and pinches let you do it all. It’s also open to downloading new apps, and works with Apple Carplay and Android Auto. The screen is actually reacting not to physical touch but to your breaking an infra-red curtain projected just clear of its surface. So it still works if you have long nails or are wearing gloves. Drawbacks are few but not negligible. If the car hits a bump, your finger sometimes jabs at the wrong menu line. And the screen quickly gets smeary.

To stress-test a car, it’s often best to have a go with a powerful engine, even if that’s not the one people buy. So here we are in the 320bhp petrol T6, a one-in-10 spec in Britain. It’s also got adaptive air suspension, also an option.

Most of the news is good. There’s decent urgency from the engine, and the charger-plus-puffer combination works well to eliminate lag. The auto transmission shifts smoothly between its eight speeds but doesn’t need that many for accelerating, though the long-legged eighth is obviously good for cruising economy. All good so far; the snag is the sound. It doesn’t only have the voice of a four, but of a fairly drab, metallic four at that. The engineers plan on doing more “sound design” in the weeks before launch, but say they won’t be aiming to synthesise six-pot harmonics. I just want a dose of interesting exhaust noise to mask the mechanical thrash.

The diesel D5 gets along well, fielding a big well of torque yet able to rev to almost 5,000rpm. It suits the car, and everyone in SUV-land has got used to diesels now, but the official tests say it won’t be much cheaper to fuel than the faster T6.

Sophistication in the suspension design is borne out on the road. It might be a tall vehicle, but body roll is well controlled and the chassis works with the standard four-wheel-drive to quell understeer and keep everything entirely benign. That’s not to say it’s actually much fun. It goes where it’s pointed like the faithful family wagon it is. The steering is high-geared – to the point of over-eagerness just off-centre – which helps disguise the fact you’re piloting a five-metre bus.

Omni-configurability is seemingly mandatory these days, and, sure enough, you can even select the level of brake assistance… a new one on me. But for pity’s sake, keep the chassis set to Comfort not Sport. That way, you get adequate damping and a decently pliable ride (at least on the 20-inch rims; the 21s add unwelcome grittiness). It’s a quiet and stable cruiser.

All the better to hear the bickering and mewling of the little darlings in the back. Ah well. If any car is soothing and protective enough to restore your fractured mental state, this might just be it.