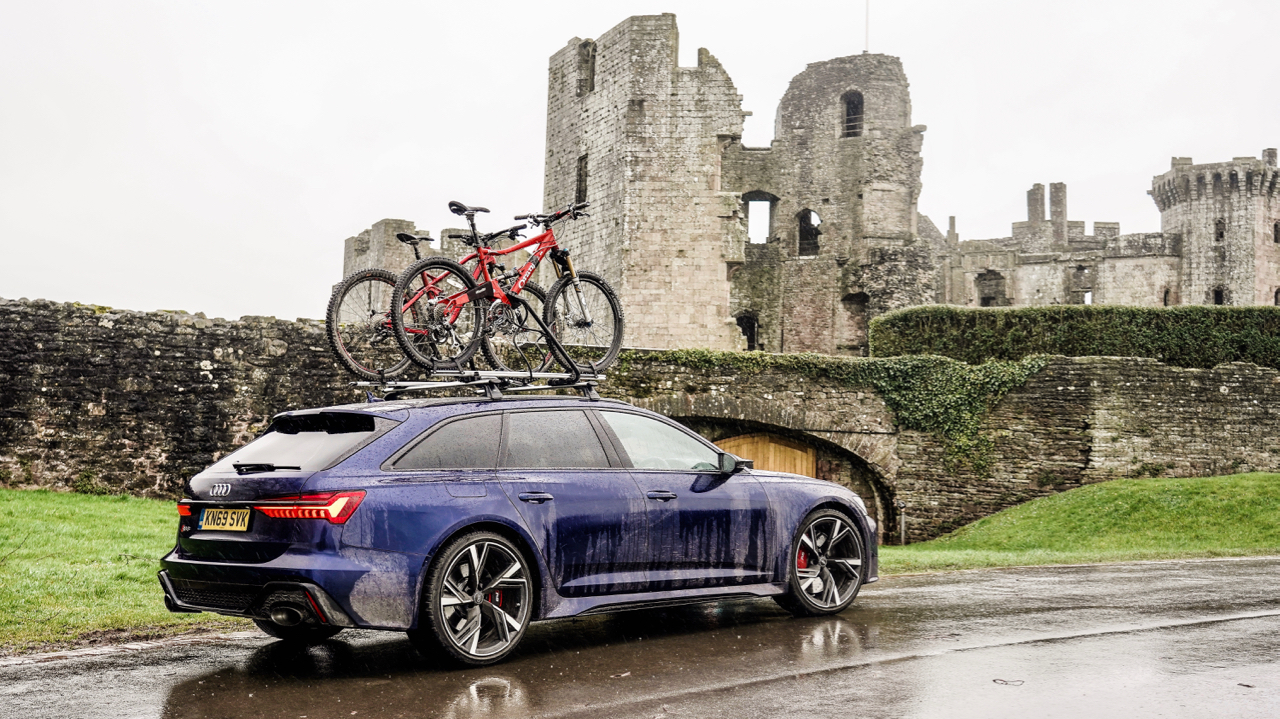 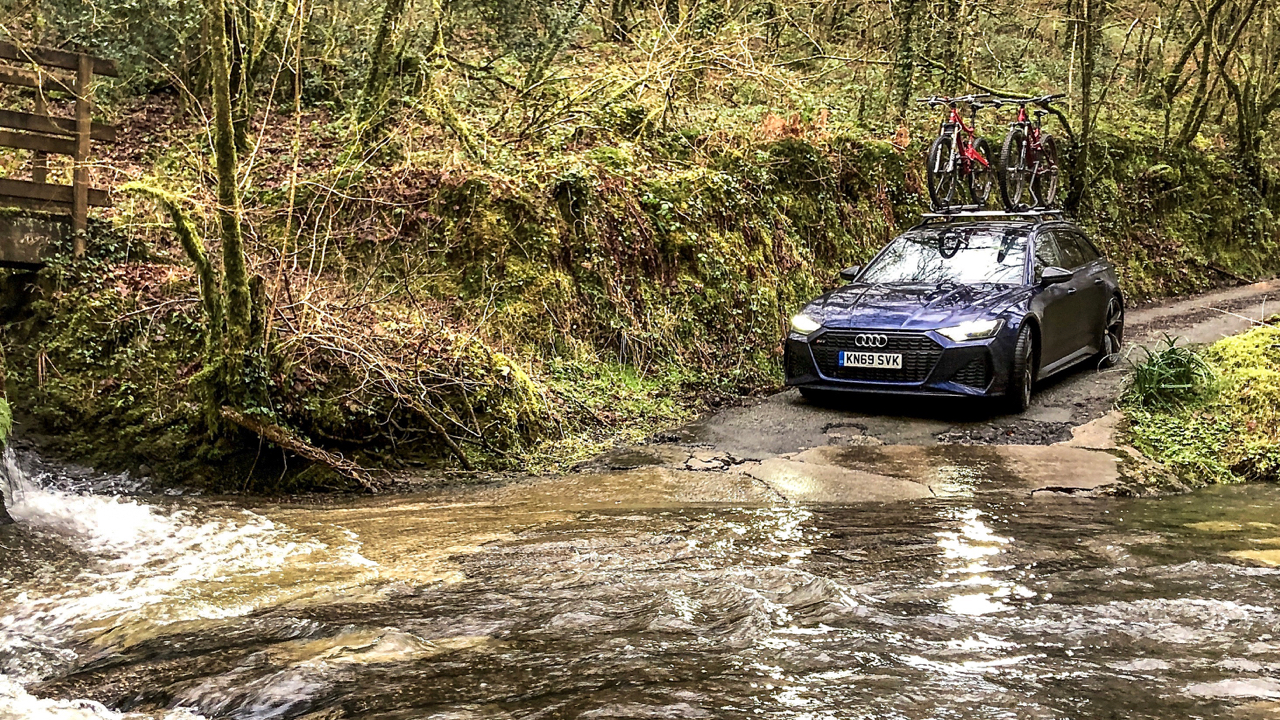 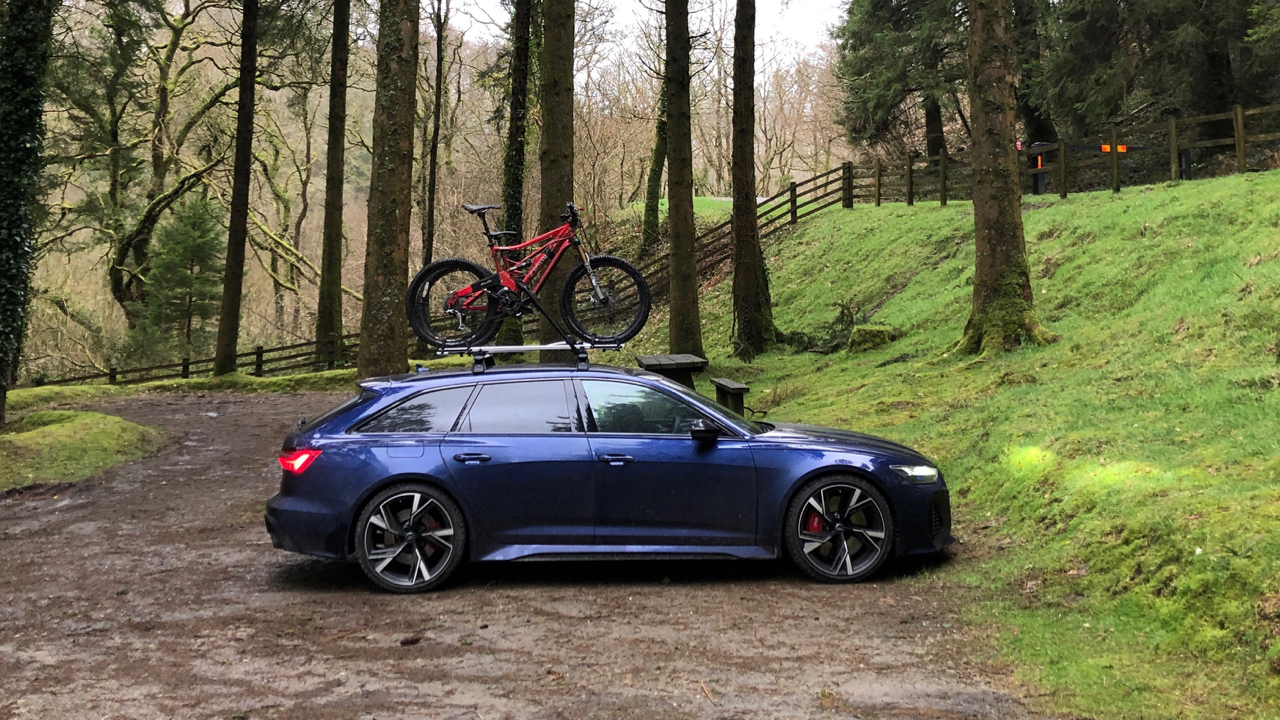 Bikes on, boot full, it's time to push the RS6 to the limit

22s make a car look small. The RS6 isn’t small. A thicker coating of grime would nudge it past five metres long, and an elbow out the window would tip it over two metres wide. With the mirrors folded in. It’s not a car for deep, narrow Welsh lanes.

Only it is actually. Yes, in an SUV you sit higher so have a better chance of seeing the cattle around the corner sooner, but an SUV is so damn inelegant. And sluggish. Less chance of it stopping for those cattle. I know the 2,075kg RS6 is a pie-muncher, but most fast SUVs are another quarter of a tonne above that. There’s barely any brake feel in the Audi (not enough sensory texture to any of the controls, in fact), but they do stop the car well. And it is nimble and wieldy. Four-wheel steering is key there, so you don’t need much steering lock on little lanes, and can three-point turn in a satisfyingly compact area when you realise it’s going to take a long while to get those sheep into that lane-blocking trailer. That earned grudging respect from a grizzled farmer. I reckon he was wondering if he could have it with a towbar. Why yes, you can.

But manoeuvrability on little lanes wasn’t why the RS6 was such a hit on this pre-coronavirus half-term break, nor was the fact that after the Conti GT I used to run, four of us could properly fit in this one (glad it wasn’t five though, the transmission tunnel is a whopper). What set it apart was comfort. No other super-saloon or estate rides as well as this or is quieter and more subdued.

You’ve spotted the flaw, of course. What’s super about ride comfort? If you want ride comfort, buy the diesel A6 wagon for less than half the price. But as anyone considering one of these cars knows only too well, a super-estate is justified on the home front not because it’s super, but because it’s an estate. That’s the job it does first. Yes, we want the super part when we’re out in it by ourselves, all the noise and drama and thrust and thump and hurl and guts, but get the family on board and you better pray headphones aren’t being jolted off ears and backsides aren’t skittering across leather.

And in the RS6 they aren’t. It has exceptional road manners. The kind of road manners that allow an air of calm to descend over the cabin, for conversations to occur, for miles to pass peaceably, no matter how muck-covered and treacherous the roads. So as we swept easily along the A40, stopping at castles and pubs (imagine!), heading to and fro, I was really contented, there simply isn’t another fast estate that does the job better.

But the place my wife had booked us to stay was, entirely unbeknown to her, about three miles from some of the Greatest Tarmac On Earth. And at the other end of that sensational strip of sinuous satisfaction, some cracking bike trails. Perfect. So one day, my son and I headed off early, and the second we were out of earshot I pressed the RS button on the steering wheel and shifted the lever across to manual. The RS6 perked up, and off we went.

OK, we had bikes on the roof, so circumspection was the order of the day, but I wasn’t feeling the RS6. Not enough noise and drama and thrust and thump. Don’t get me wrong, it’s fast, but the other word the RS6 seems to prize above all is ‘unflappable’. And certainly I was unflapped. Even with modes maxed, the steering was too light, the gearbox (automatic rather than double clutch) not crisp enough. I wanted to feel the front wheels bite, have the steering chatter at me, have the RS6 get a bit edgy and wild.

The trouble is that has never been a part of its character. Perhaps the last one had a bit of that in it (but it also had too much nose weight, something this one has cured). But the rest of ‘em back to the first in 2002? No. So what you have is a car with enormous power and potential, that doesn’t exactly encourage you to use it. Which is kinda virtuous, I guess. It’s a big stick, carried by a softly-spoken chap. Its power delivery isn’t as massive and urgent as a BMW M5's, it doesn’t have the hunger and passion of a Merc E63. But you can’t get an M5 wagon, and the Merc will have passenger heads ricocheting off the rooflining.

And besides, you can toughen the RS6 up. This one rides on the standard air suspension, but you can switch to coil springs and cross-linked dampers (the £1,300 Dynamic Ride Control system). All being well with the world, next time I'll be telling you what tricks the air suspension has been playing that has caused it to mimic a lowrider. In the meantime, know this: my family loves the RS6, my wife loves driving it precisely because it’s not hardcore and intimidating, and we all love the way it looks and love travelling in it. And that, after all, is 90 per cent of the job.