Tightly matched on paper, quite different in person. But which fast estate is better?

Brawny, aggressive and rowdy, meets effective, smooth and grippy. Now, guess which one’s which. Not hard is it?

And relax, this isn’t where I throw you the 180-degree curve ball. You’re not wrong. The latest RS4 is everything we’ve come to expect from a fast Audi, likewise the Mercedes-AMG C63S. They are caricatures of themselves, and in the super saloon playground, they’re the ones at either end of the see-saw.

They have plenty in common: They weigh within 10kg of each other (the Merc’s porkiest, at 1,725kg), claim identical 4.1-secs-to-62mph times, just 4g/km of CO2 separates them, they have identical 1,510-litre load bays with the seats folded, while a mere 10mm separates their overall lengths. If you were a purely rational being it shouldn’t matter which one you choose – each has been created with a gimlet eye on the other. 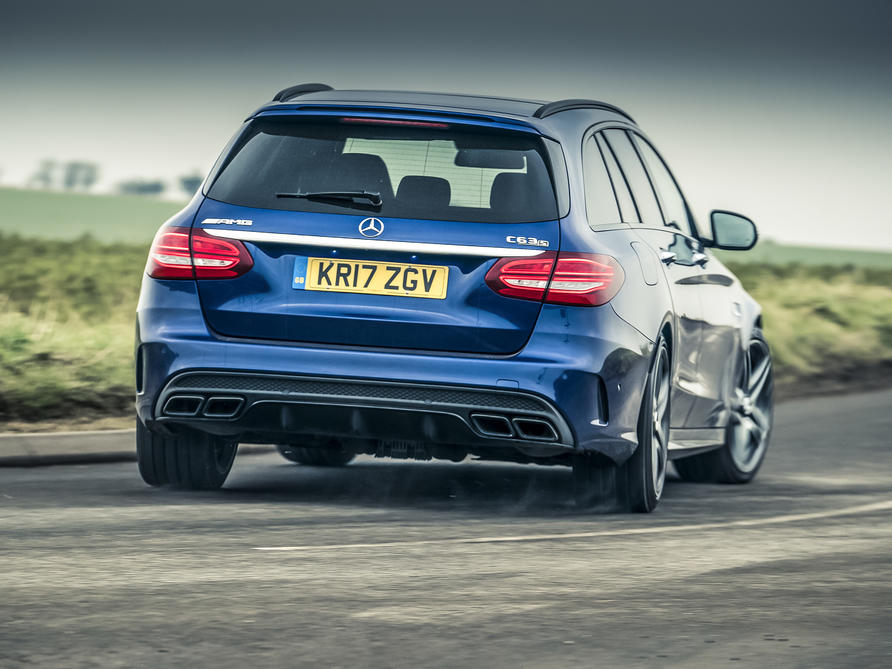 But philosophically they are miles apart. The Audi’s focus is safe, secure speed. It channels the 444bhp and 442lb ft delivered by its twin turbo 2.9-litre V6 to all four wheels.

The Merc? Well this one is a C63S, which means the rear wheels have to cope with the combined impacts of 503bhp and 516lb ft coming out of the twin turbo 4.0-litre V8, rather than the paltry 476bhp and 479lb ft of the non-S. I mean, how would you cope?

Actually, we used to cope just fine. We had a non-S C63 wagon on the long term fleet. We had to make do with a mechanical rear diff rather than an electronically controlled one, we had no Race mode, active engine or transmission mounts, but aside from that, many of us actually thought we’d be better off saving the seven grand and buying a £63,575 C63 (which lines up more neatly against the £62,175 RS4) rather than the £70,130 S. That’s not the case with the latest E63 AMG; there, you need the S as that’s the one with Drift Mode…

No need for a special Drift Mode in the C63, of course. That comes as standard. It’s getting the tail to stay in line that’s the trick. Its 516lb ft is a colossal amount of torque for a set of modestly-wide 265 rear tyres to cope with. The C63’s power delivery is best described as rampant. It hurls itself through the mid-range with almost unwarranted savagery. Anything on the road surface that might upset traction or torque distribution – white lines, cats eyes – will. 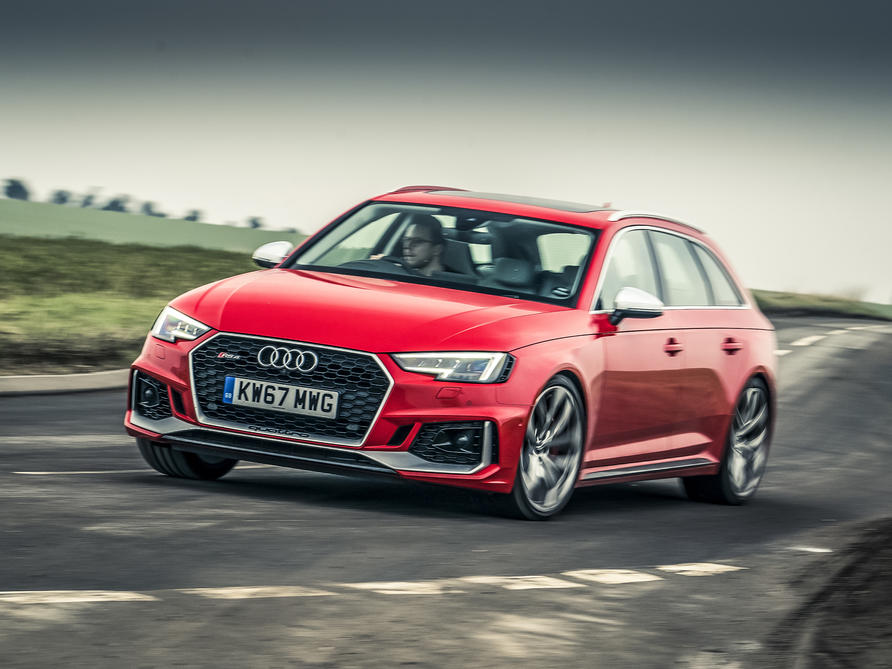 At this point let’s leave the C63 and consider the RS4 instead. The last car I drove with this drivetrain in it was the RS5 coupe, a car I really didn’t get on with. No physical changes have been made between that and this, but Audi’s engineers did tell us that they’d tweaked the calibration. I hope they’ve done it to the RS5 as well, because you can tell. The engine is sharper than I remember, more responsive and eager to the throttle.

There’s still a warbly fakery to the noise when you’re pootling about, but when you get going and concentrate more, the sound focuses in as well. It becomes crisper and cleaner. And then, all too soon, it’s over. The redline is at 6,250rpm. A Bentayga V8 revs 1,000rpm higher than that. OK, the limiter doesn’t cut in until 6,600rpm, but it still feels like the RS4 is being cut off in its prime.

The eight-speed auto is just as snappy as a twin-clutch, and the gearing is short, which makes the RS4 feel pleasingly immediate and endows it with superb sprinting ability. Audi says 4.1secs to 62mph, and while we didn’t have the chance to independently verify that, I guarantee it’ll match the 3.5secs we recorded for the RS5. It is blisteringly effective. We did have a go at trying to beat Merc’s 4.1secs claim. I suspect it is possible, on a hot day with sticky surface and tyres. But in the UK, in March, the best we managed was 4.26secs.

But the times aren’t important, nor is the fact that once it has traction, the Merc is slightly faster than the Audi (from 30-70mph the C63 was 0.1secs faster than the RS5 coupe, at 3.04secs). Because in the kind of driving that we enjoy doing - the twisty, turny kind - the RS4 is faster. It just is. Four-wheel-drive traction management makes it punchier out of slow corners, its cross-linked dampers help the ride level out at higher speeds – in short, it makes speed easy to acquire and maintain.

Success
Skip 20 photos in the image carousel and continue reading 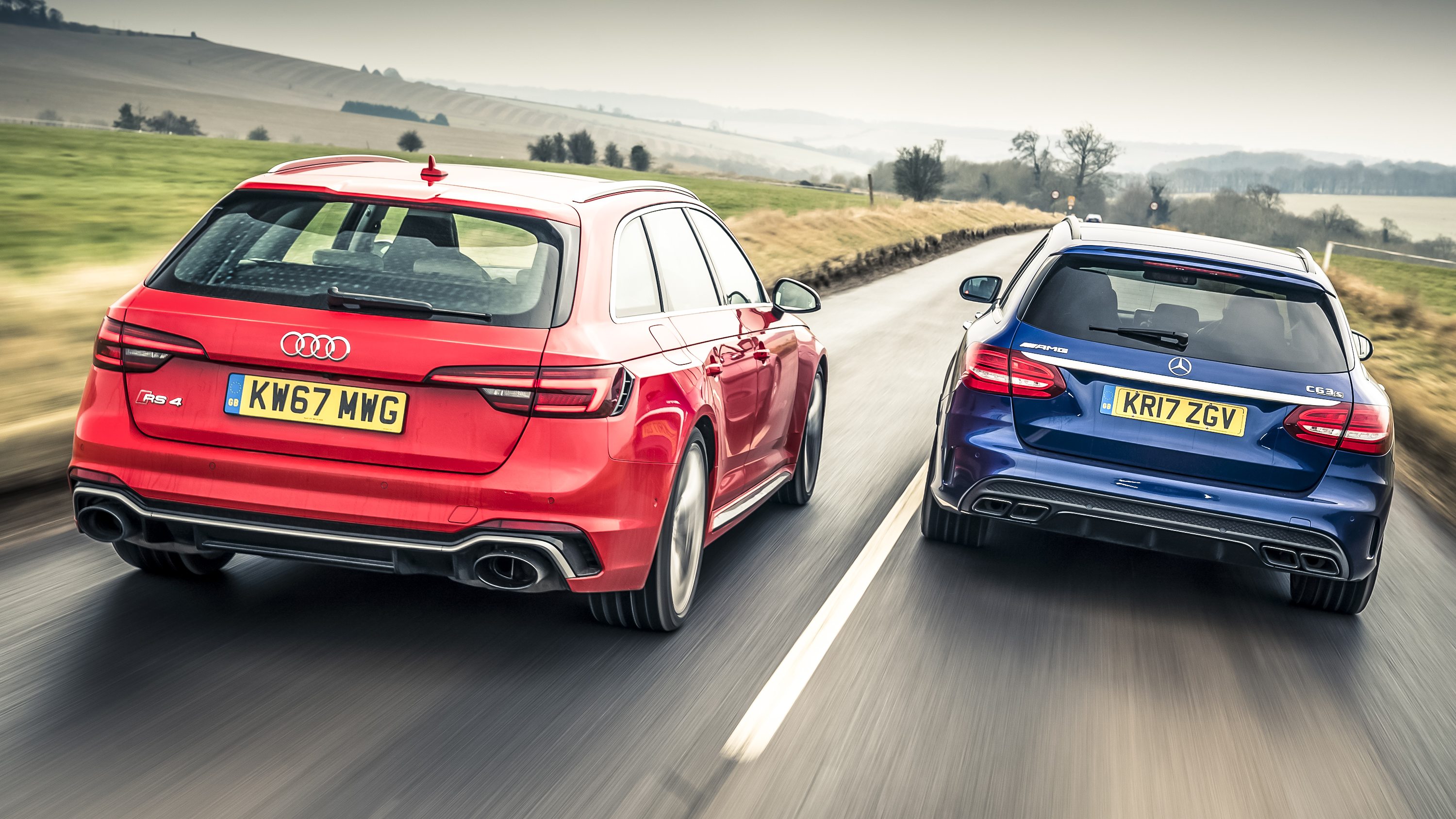 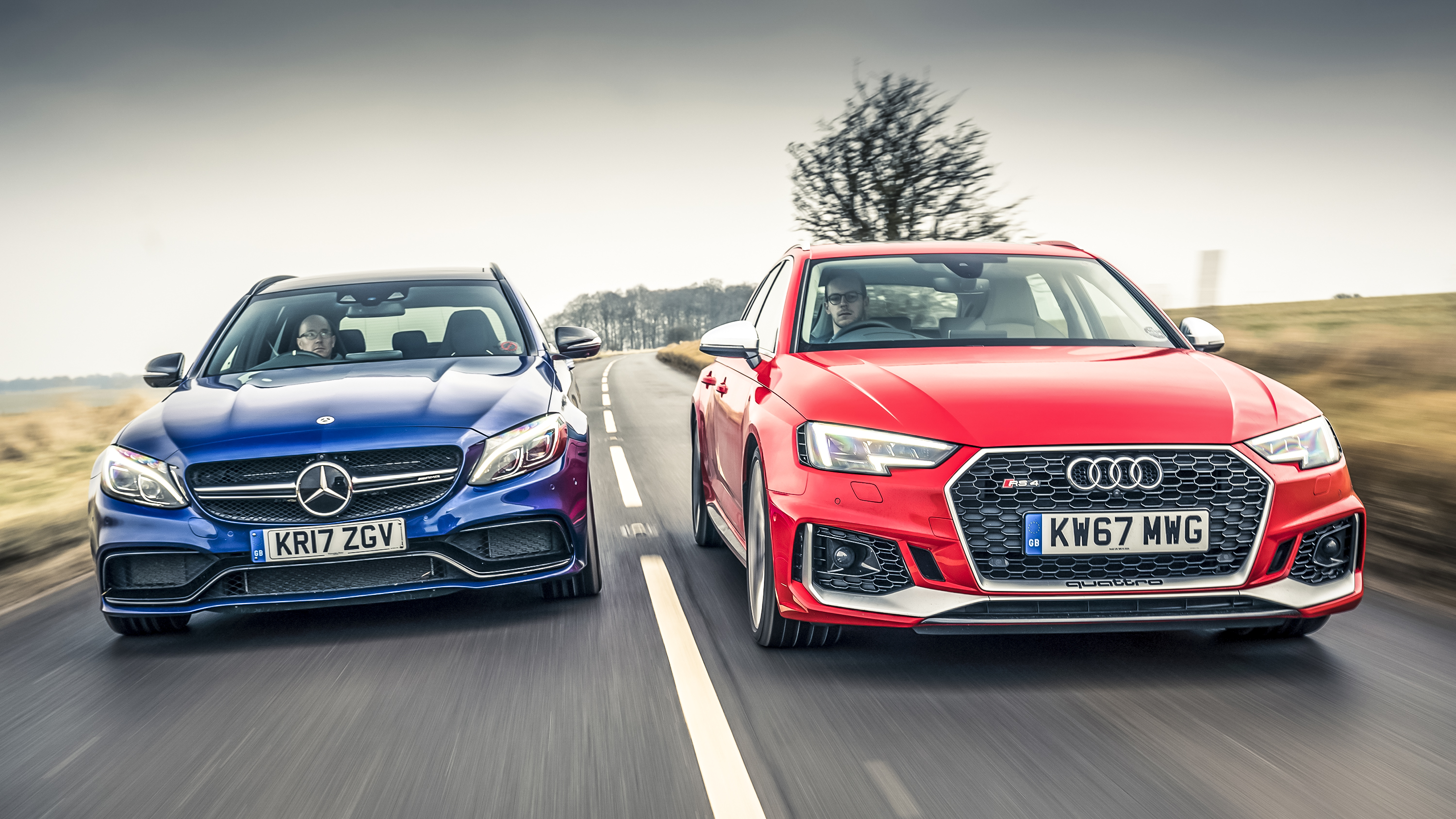 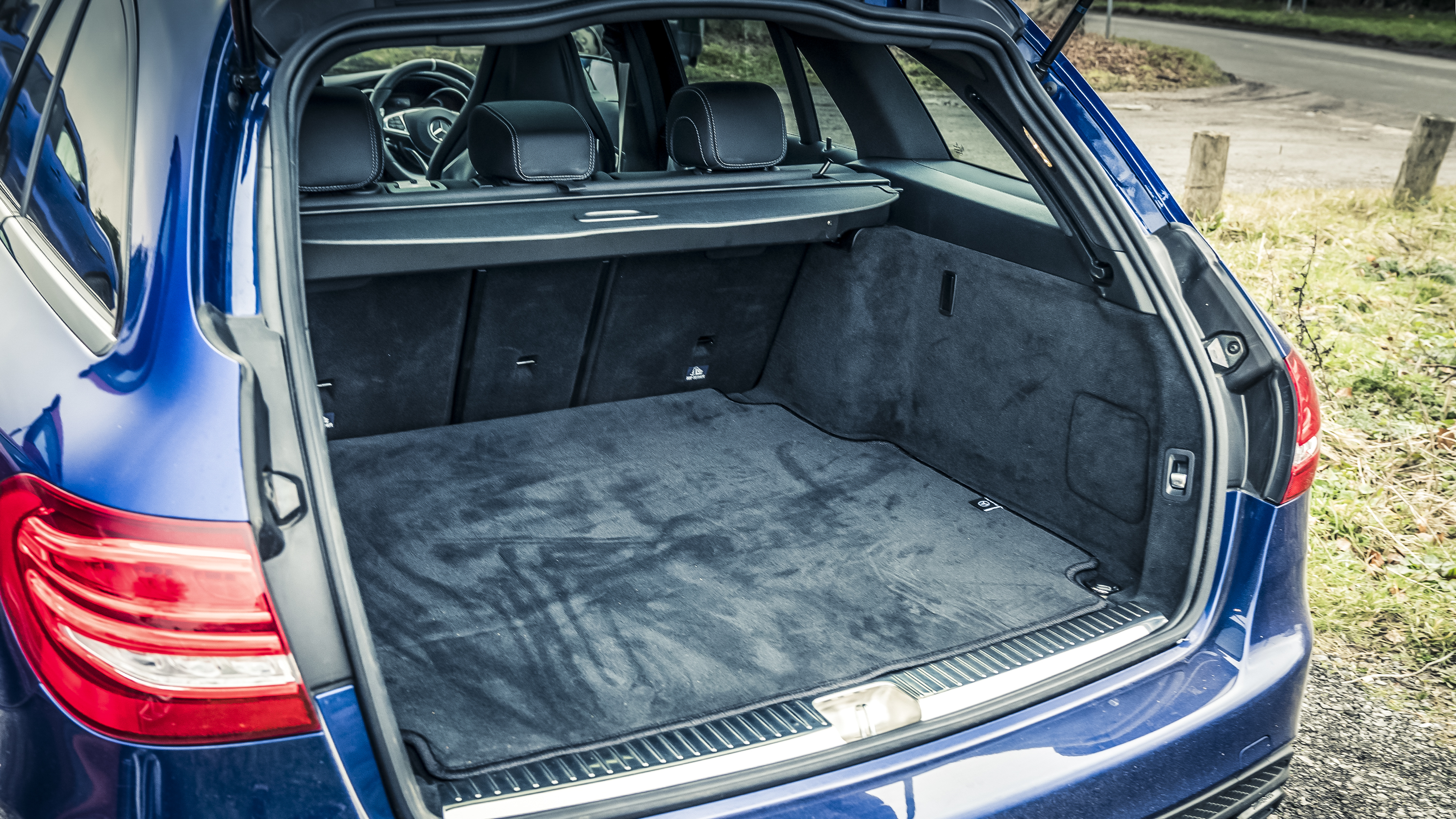 Is that what matters to you though? Speed alone? Not feel, or excitement, or dexterity? Because those are what matters to me. I’d rather go slower and have a better time, thanks. And that’s what the Merc does. Sure, it’s a more abrupt car, there’s more cabin resonance and noise. On a long journey you will feel the miles more. The seats are less cushioned, you’re more aware of the ground underneath the tyres, the engine working away, the mechanical hubbub.

But there’s so much more texture to the way the C63 drives. Here is a car that demands you interact with it. It has more direct, meaty and feelsome steering, you feel the diff tense up as you exit corners, sense the forces transfer, the bunching up under acceleration. In Comfort mode it’s more aggressive than the RS4 is in Dynamic, it’s a far more muscular, entertaining and engaging car. It reaches out and commands your attention, even if that’s often by a sudden snap of wheelspin. 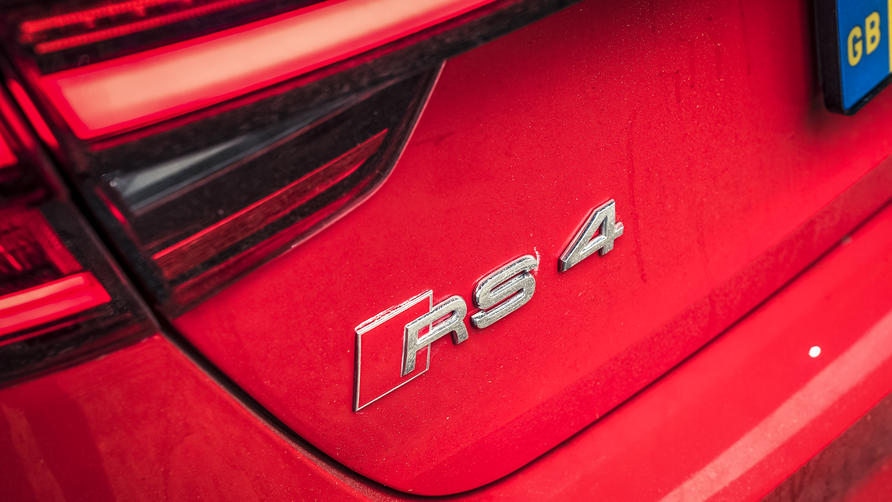 But these are also small family estate cars. And you know what this means – they need to do small family estate work. Kids and dogs and shopping and school. And this is where the Audi scores. As a car to just climb in and drive, it’s superior. It doesn’t erupt into life as noisily, the RS4’s cabin is markedly superior in terms of design, material quality and tech integration.

There’s more legroom in the back, more cosseting seats, plus a tighter turning circle, smoother gearbox and softer ride. More economical, too? Surprisingly not. It might have a litre less swept volume, but it’s the Merc that has the better economy figures (33.6mpg plays 32.1) and did better in our hands (23.6mpg against 22.8).

Bit more on the Audi’s ride: the RS4’s diagonally linked dampers do a good job at high speed, but around town they need a double take to quell bumps – there’s just a bit too much spring and not enough damper, a little too much unwanted movement. But I’d far rather have this than the wooden chassis of older Audi RSs. They neither rode, nor handled. This makes a decent fist of both. What’s lacking is excitement.

But let’s return to first principles here: small estate cars, not coupes, so a different audience. There are lessons Mercedes can –and should – learn from Audi. The RS4 is a great ground-coverer, the ride is mostly supple, refinement is good. At the same time, there are much more important lessons Audi should be learning from Merc about how to make a car thrilling to drive. 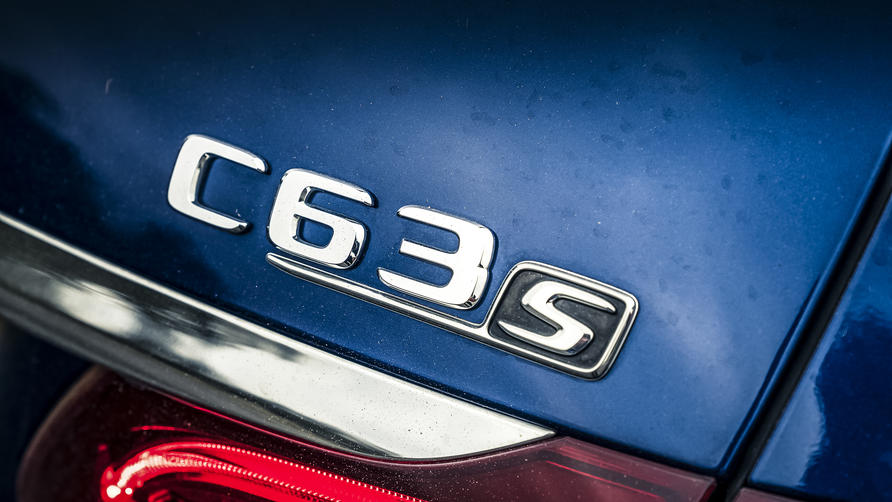 Because the RS4 is wearing the wrong badge. It should be badged S4. Audi has this lovely, simple, communicable range strategy for its sports cars: S, then RS. In my head S cars should be the rapid, clinical, stealthy, efficient ones, as that gives the RS cars head space to be more daring, more sporting, more aggressive.

I know that’s where Audi says they are, but in practice the S cars have no profile. A clear separation would give Audi more bandwidth, a strategy that Mercedes, BMW, Alfa et all would struggle to match. I want to see it happen, but if experience has taught us anything it’s that once Audi has identified a good thing (original R8, TT, RS4), it doesn’t do enough to develop it.

So the Merc wins here, just as it did when C63S coupe met RS5. Then, there was a gulf between them. It’s closed up a bit now, and there are clear reasons why you might choose the RS4 over the C63, but I can only really recommend it if you want a rapid, easy-going daily driver.

Its strengths do shine a light on the C63 though: does it need to be as overtly aggressive? Must it ride so rigidly? You get used to it of course, and then once you’ve unloaded kids, dogs and bags you can go and just… drive. Indulge the noise, feel it move and bark and bite and strain. And then you’ll smile and giggle and be mightily glad you chose the Merc. 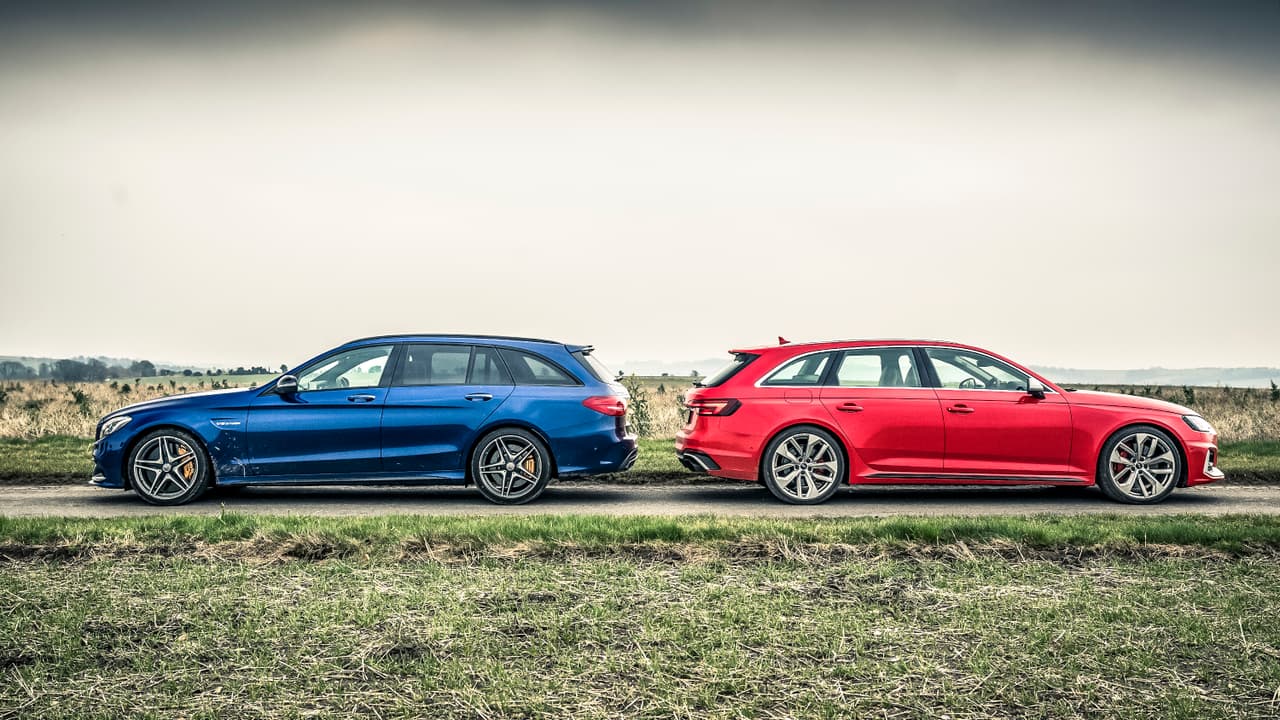