The mirrors on the new BMW M240i. Have you noticed them? Yep, now you see it. They’ve got the same bizarre twin-support-but-only-one-touches-the-car motif as a proper M Division car. Little touches like that used to be exclusive to M2s and M4s. The watered down ‘M Performance’ models got normal mirrors, painted silver.

Why, fellow nerds, has the new M240i got the mirrors from a really fast BMW? Simple. BMW says it’s so fast, it deserves them. With four-wheel drive as standard, eight forward speeds and a 369 horsepower wallop, the new M240i needs only 4.3 seconds to get you from 0-62mph. That’s as quick as the original M2, and faster than the old V8 M3 GTS.

That’s why we’ve broken the rules on engagement. Strictly the hierarchy goes like this: normal A3 vs normal 2 Series, S3 vs M240i, and the RS3’s traditional rival would be the full-fat M2. 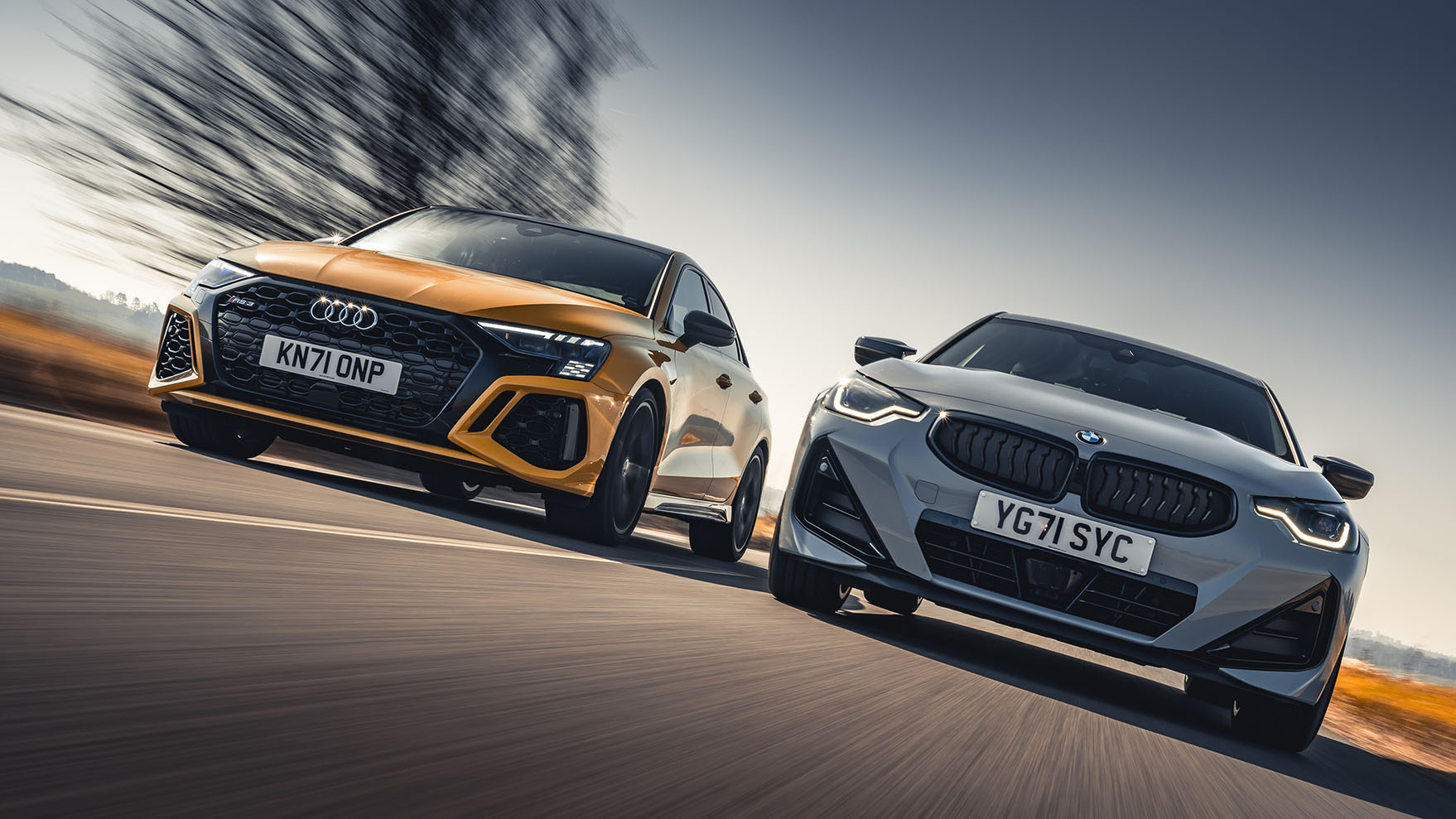 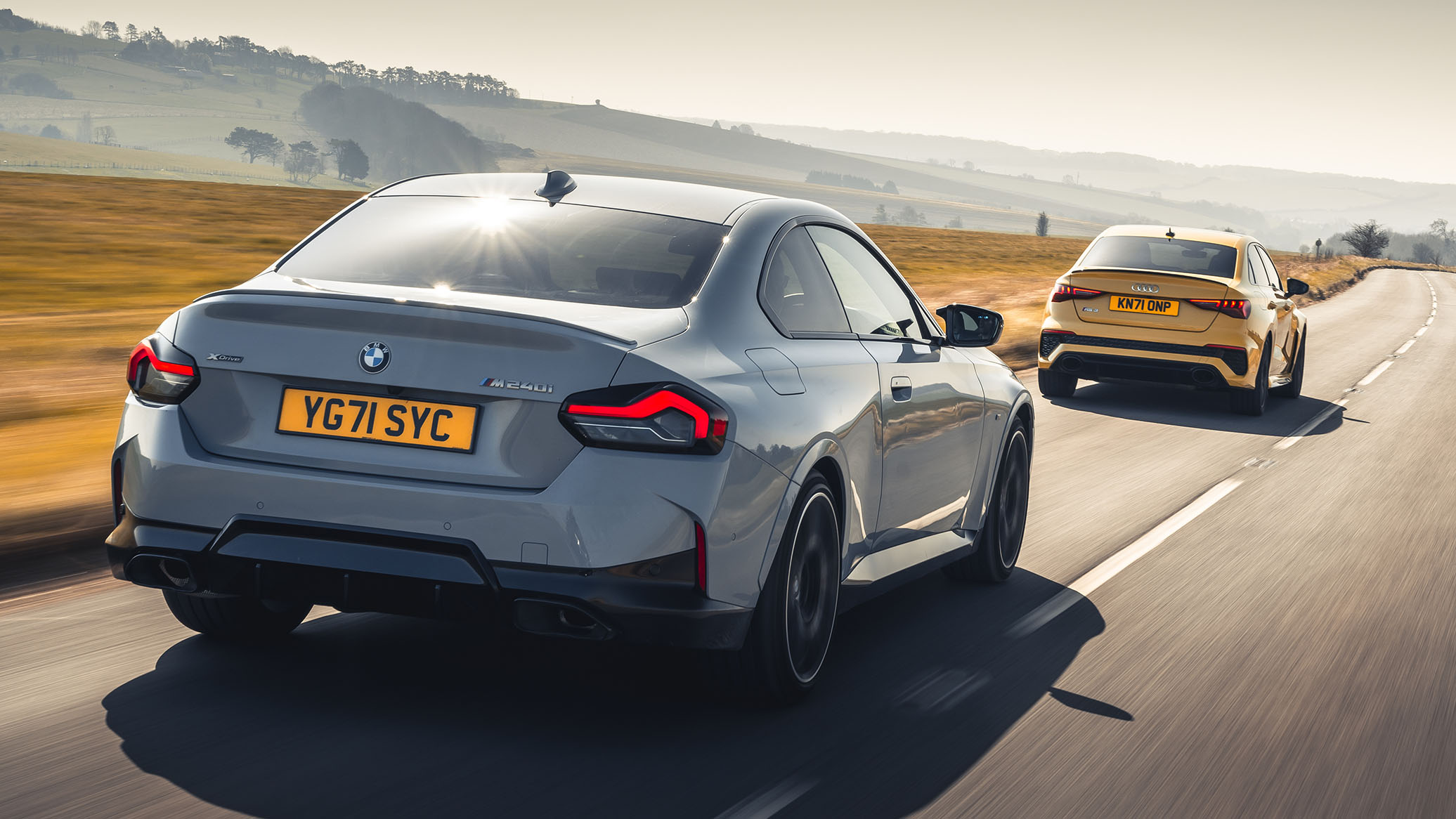 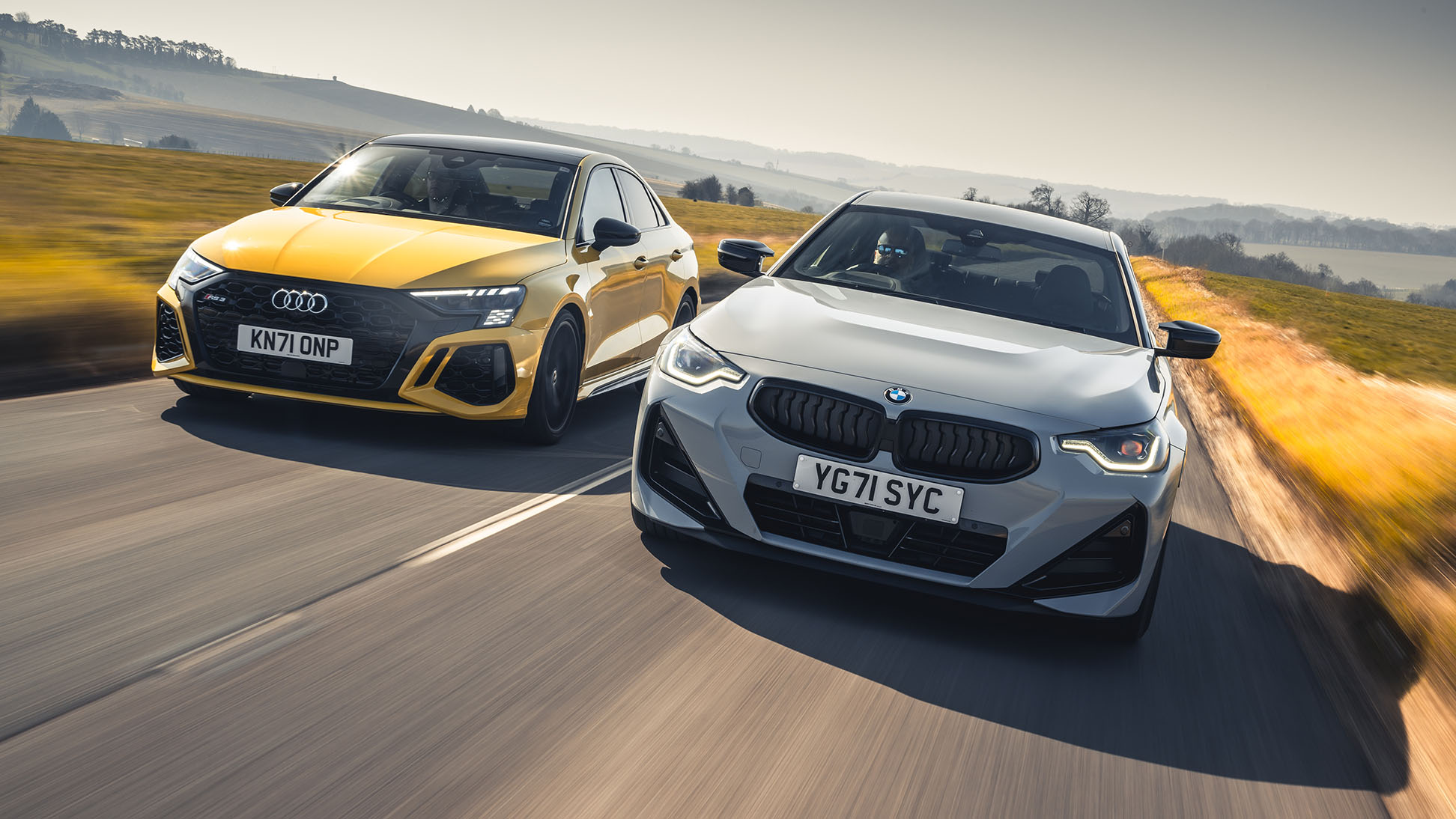 But the M240i is now so powerful, so fast and so four-wheel drive, this is a more interesting fight. The new-gen M2 is a while away yet. The RS3 recently learned how to do handling too…

I grant you, the RS3 is a lot more money. A base price of almost £58,000 makes the £46k M240i a bargain, though this RS3 saloon counter-punches with 394bhp. Both cars have identical 369lb ft torque totals, and the Audi’s twin-clutch transmission has one fewer gear. Oh, and it’s got two more doors.

Looks smart though, the RS3 saloon. Taut and well-proportioned, with a sure-footed stance. There’s way too much fake plasti-mesh lazily splashed about, but the crease-festooned M240i looks fussy and lumpy next to it. Somehow, it manages to look heavier. 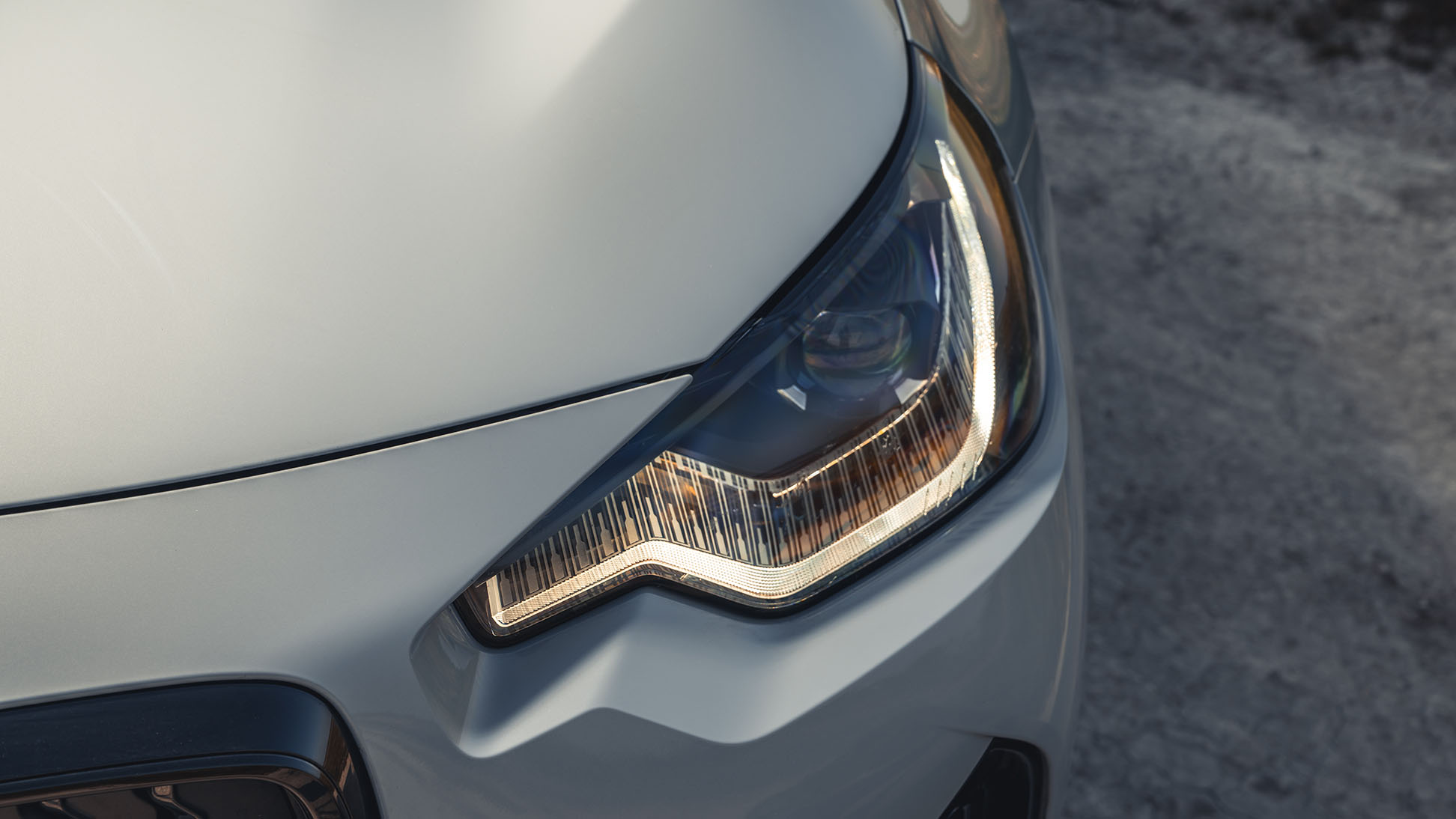 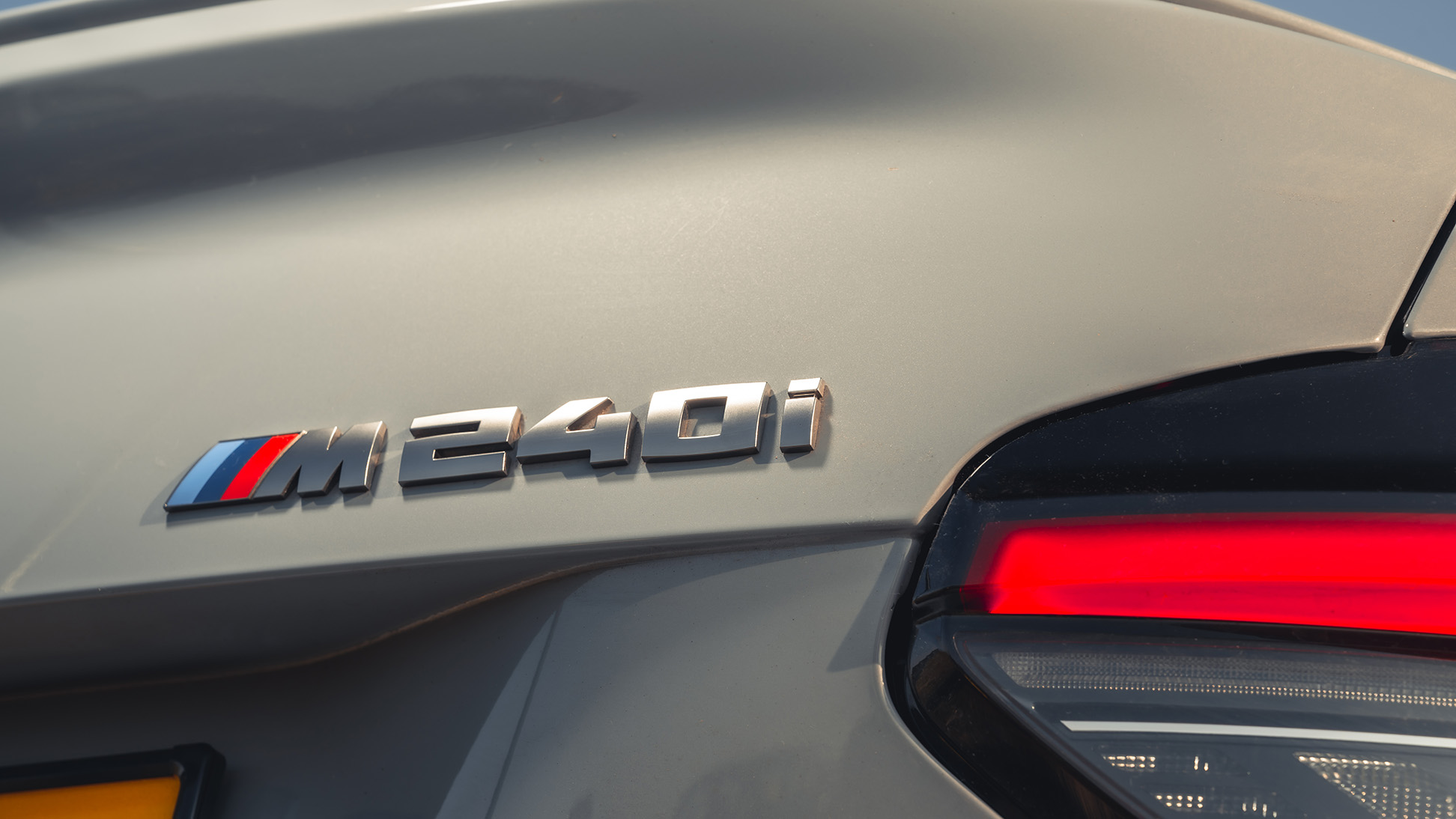 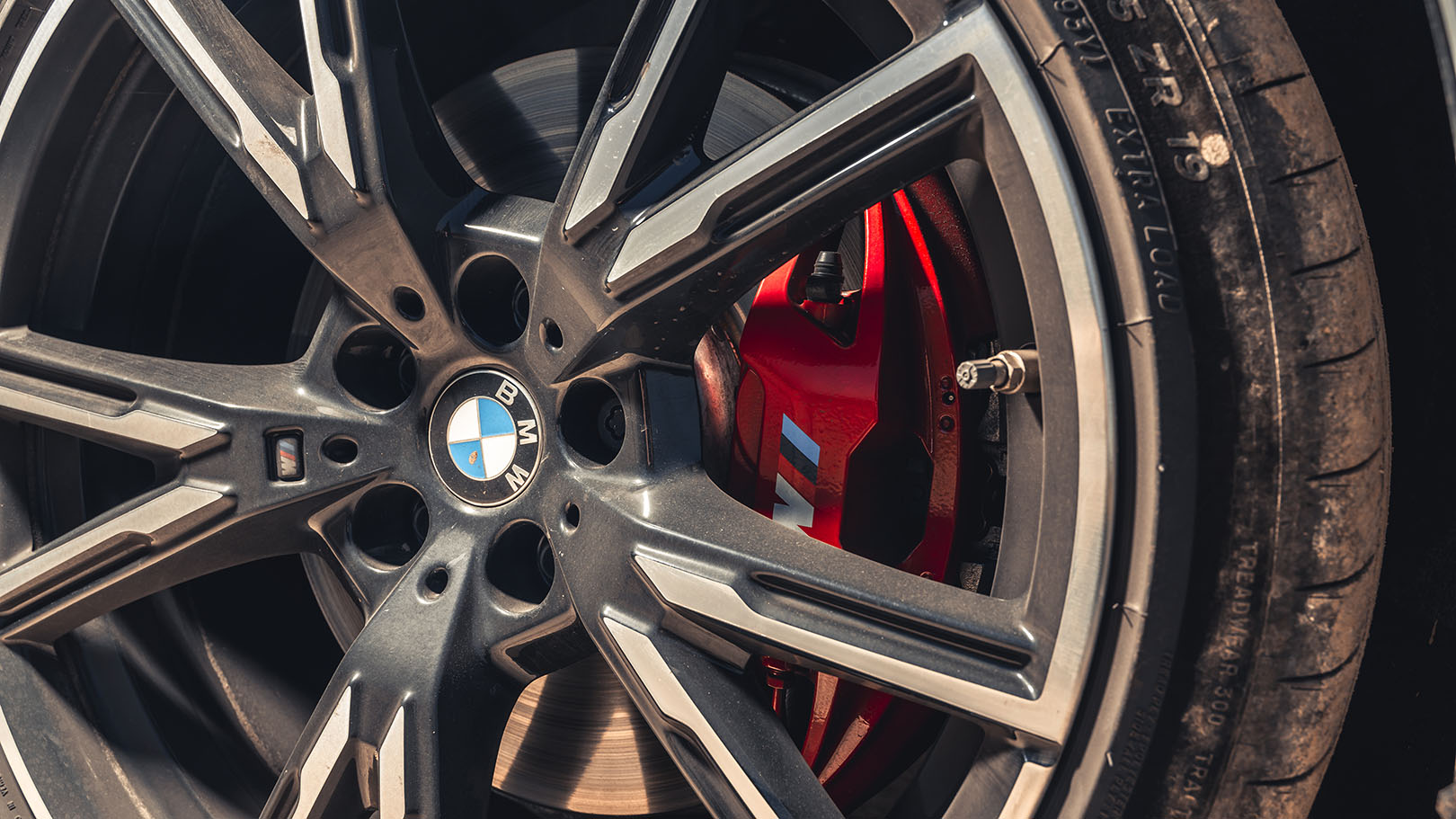 It is – by a hideous 125kg. Ouch. The hottest 2 Series coupe (which is now based on a cut-down 4 Series platform so it can be stuffed with six-cylinder engines and rear-biased all-wheel drive) outweighs the quattro-drive four-door Audi, which you could just about get away with using as the family car. How did that happen, BMW?

The weight explains why the torque-rich BMW feels rapid, but the Audi is shockingly, breathtakingly fast. Off the line both cars get away strongly, their relatively supple suspension aiding traction as all four tyres bite into the road. But once it’s on boost the RS3 charges ahead, snorting and trumpeting its way to 62mph in about three and a half seconds. Honestly, if the government paid attention to TopGear.com and knew how rampant this ickle family saloon was, it would be outlawed. For point’n’squirt blasts, the RS3 might be the fastest car in the world.

Its five-cylinder engine is a rawer device than the honey-smooth straight six slung ahead of the BMW driver. That engine oozes about on a pillow of torque, somehow never in the wrong gear. The Audi will drop off boost and leave you in a hole. When it finally wakes up, there’s big vibration through the steering wheel as it winds itself into a frenzied warble. If you’re buying an RS3 you’re probably looking to celebrate the dying days of this raucous powerhaus, but there’s no getting away from the fact it’s a lot less refined than the BMW.

There’s more about the BMW that feels expensive. Take the interior – it’s exiled from a 4 Series, which means it's laced with tasteful dashes of real metal and beautifully tactile buttons. The RS3 has the interior from an A3, and not enough has changed. The seats lack the BMW’s kidney clasping support, the steering wheel looks like it came from a Q7, and the driving position is sit-up-and-beg, where the BMW sits you classically low and long-legged. 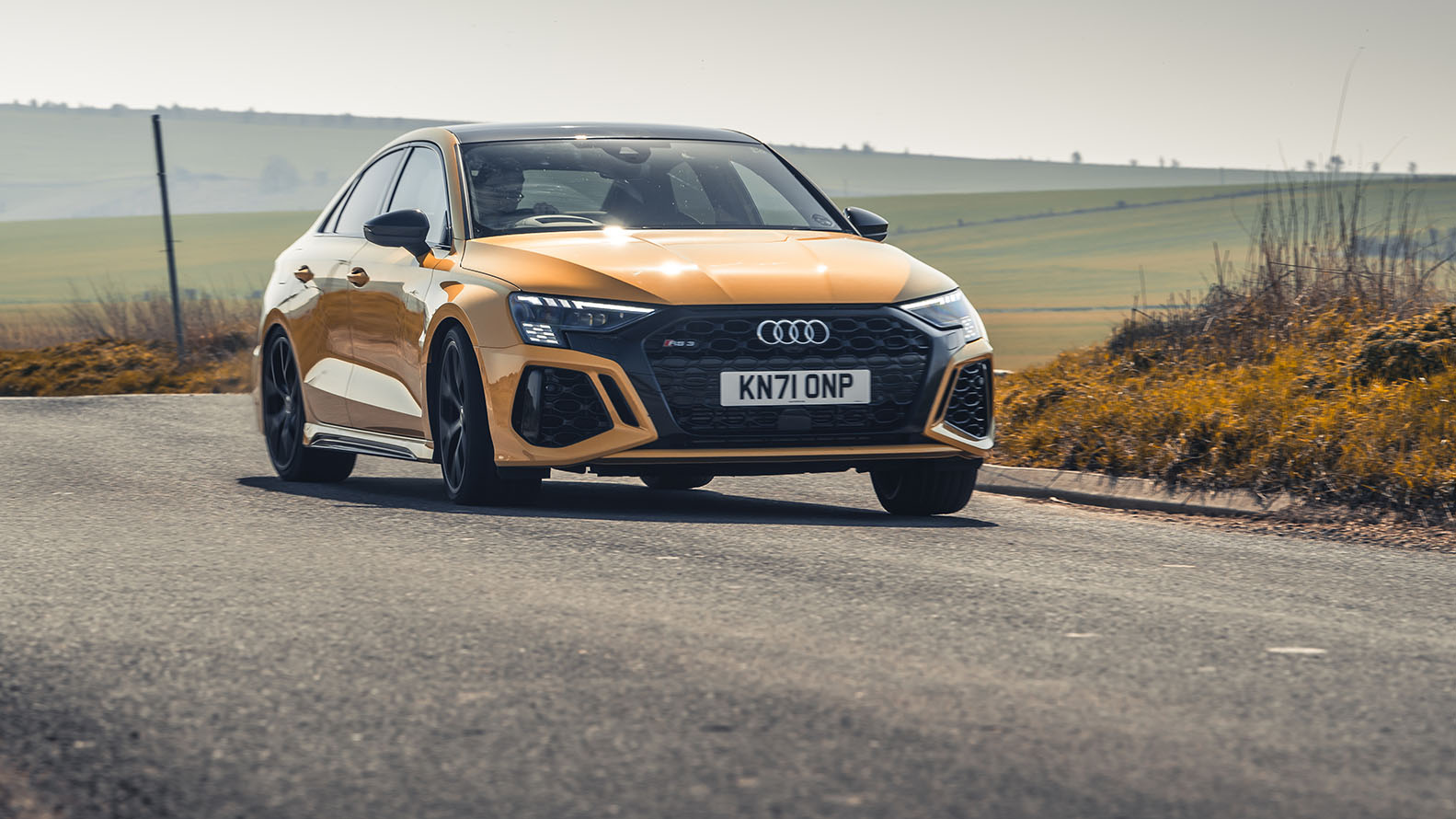 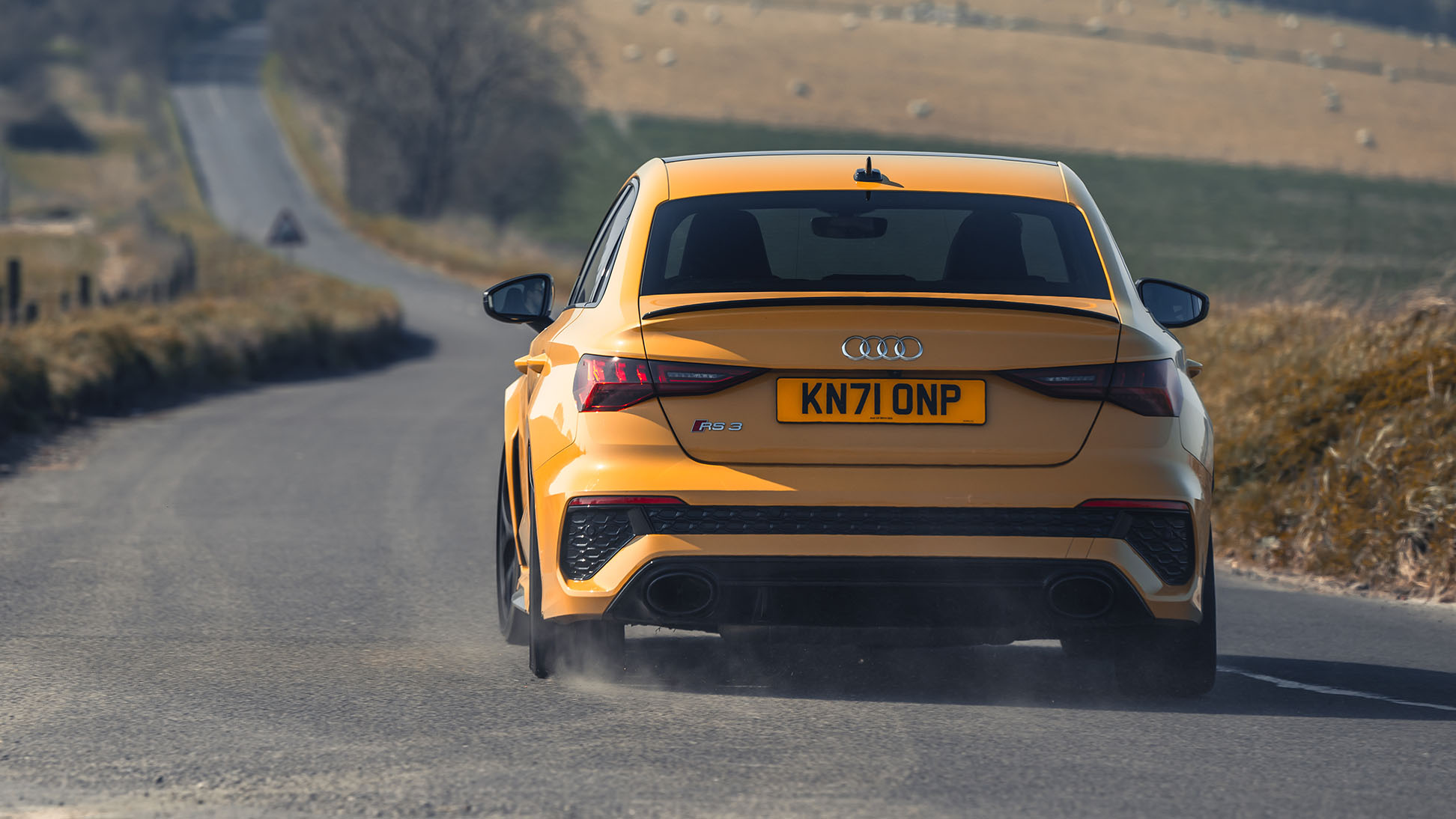 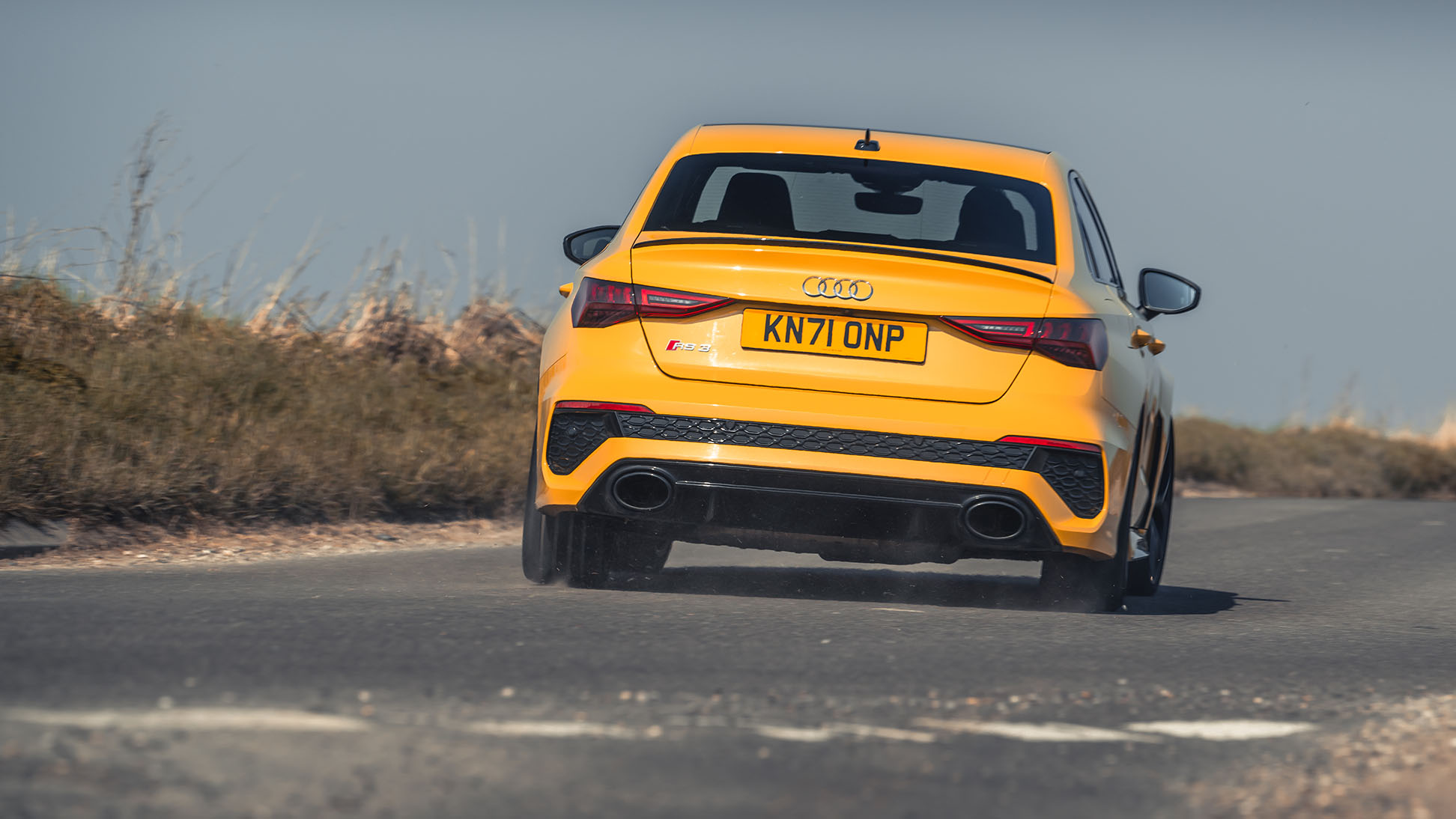 It’s as through Audi spent months honing the new wheelarches, bumpers and self-levelling Audi-badge wheel hubs, and only remembered at 4.55pm on Friday that the RS3 should feel like a sports car inside. So, they had the IT guys stay late to create some silly new graphics for the digital cockpit display, and hoped you wouldn’t notice this cabin is lovely in an A3 and fine for an S3, but doesn’t do an RS car justice.

In fact, the more time I spent with these two, the more it felt as though the BMW has learned ‘how to Audi’. If you grabbed a sheet of paper right now and jotted down what Audi does well, you’d probably say ‘posh interiors, nice tech, refinement’. The M240i kicks the RS3’s backside at all of that.

So how does the Audi fight back? Weirdly, by falling back on its newfound ability to enjoy corners which – you guessed it – used to be the USP of a perfectly balanced BMW. I can’t pay the Audi a higher compliment than admitting that when our photographer said ‘okay, pick a car and go drive round this corner for some pictures’… I chose the RS3. Not in Drift Mode, but in the RS Individual setting (lairy engine, soft suspension, ESC half-way off). It was a giggle. A very predictable, binary one – you clog the gas, the torque-splitter diff conjures a sideways squirt from the back axle, you feel like a hero and carry on your merry way. Arrive at the next bend, and repeat. 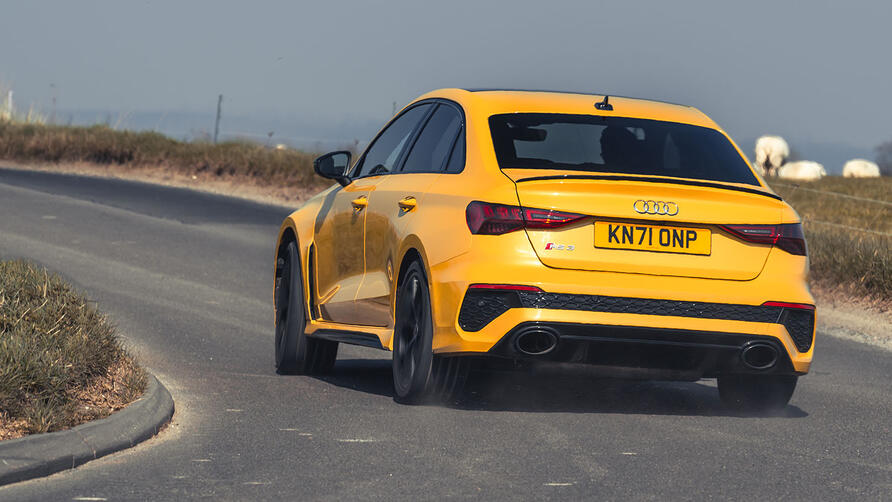 It’s doing a lot of it for you, so if you prefer your cornering organic and free from genetically modified hoonery the BMW – which comes over all old-school rear-wheel drive if you choose to provoke it – will suit you better. But that weight adds a layer of clumsiness to the BMW’s reflexes. The Audi – get this – the Audi is more athletic. I’ve never thought any Audi this side of an R8 was ‘athletic’.

At this point I like to rattle off some housekeeping. Quick-fire points incoming. The BMW’s eight-speed gearbox and semi-hybrid 48-volt boost means it’s spectacularly frugal on the motorway, cruising at over 40 miles per gallon. As an average, that settled down at 29mpg – beating the thirstier Audi, which won’t get as far on a tank.

Both have surprisingly languid rides, agreeing with rugged British back roads that would shatter a Honda Civic Type R into a million pieces. There was a time anything with an ‘M’ or ‘RS’ badge had suspension fused from solid rock, so this is progress. 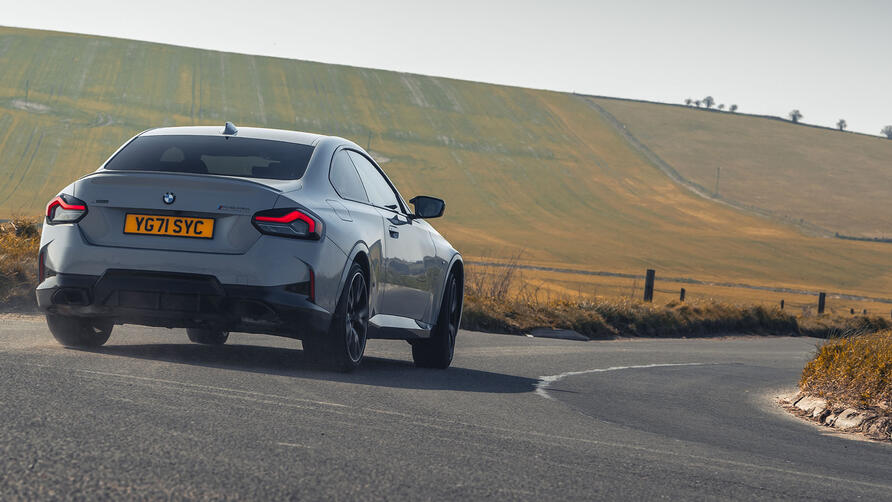 I will award the RS3 points for having a slender steering wheel, and dock BMW for continuing to make theirs out of stale black pudding. Doing lots of driving in town? You’ll want the M240i’s auto gearbox – it’s much slicker than the Audi’s ‘I’d prefer to be racing someone’ dual-clutch.

Which wins? Oh, I couldn’t say. These aren’t rivals, the Audi is much more expensive…

Only joking. I know RS vs M can get VERY tribal, so if you’re a BMW or Audi disciple, you’ll have made your mind up. I find the Audi more beguiling because it really does feel like you’re driving something truly outrageous – something that shouldn't strictly be allowed any more – on account of that bombastic engine. And yet, it’s deeply, irreconcilably improved over any RS3 before. Any RS Audi, in fact. So supple, and yet so silly. And with a slightly naff cabin. It’s all so… un-Audi-ish.

The M240i is a great little package, but bereft of its own character – it feels like a 4 Series, which feels like an 8 Series, which isn’t different enough from the old 6 Series. It’s a bit confusing. But it’s also professional, polished and German in all the very best ways. A bit of a bargain too, for the performance and road manners on offer.

I’d have the RS3, because it’s been one of the biggest surprises of the past 12 months. But if you’re enjoying life in your M240i and see the Audi hove into your new M-spec mirrors, don’t let it intimidate you. It’ll probably run out of fuel first. 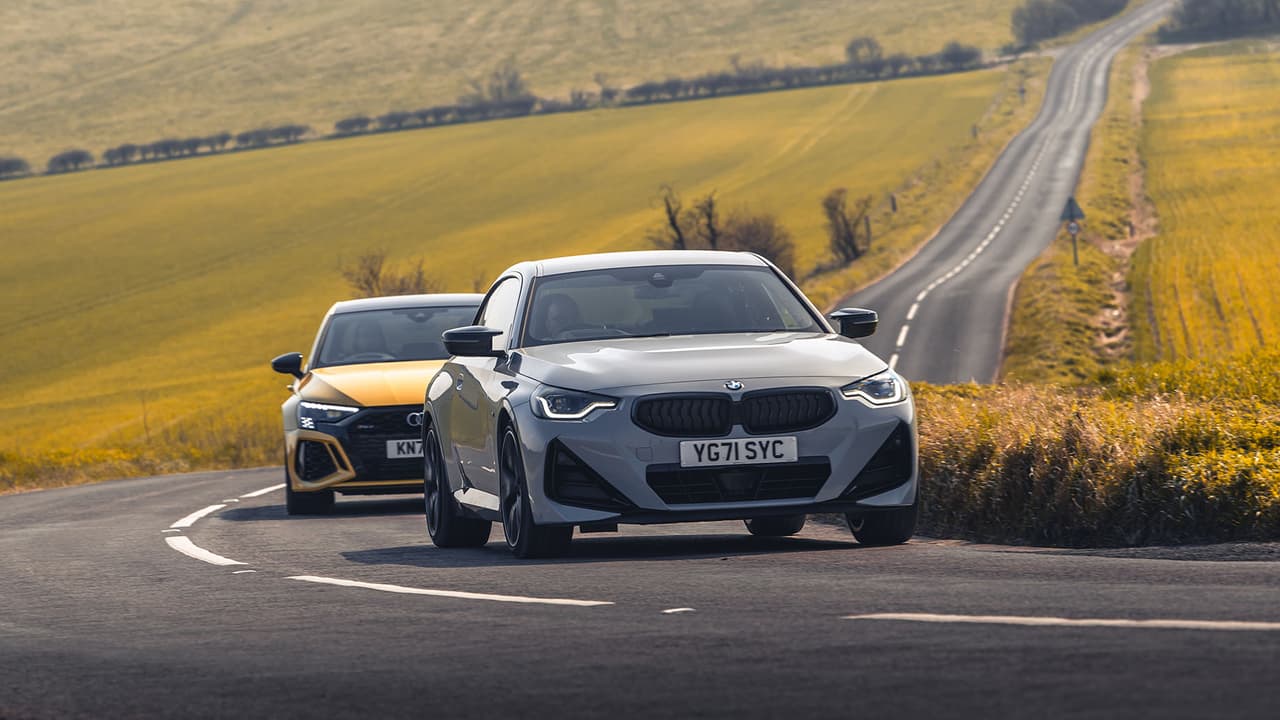