This – ahem – lightly modified 50s Porsche has raced in some of the toughest places on Earth. Now it’s got one last challenge

Safe to say this isn’t your normal Porsche 356. It’s not some Photoshop folly, either. Or some tin can replica. This is a genuine 1956 Porsche 356 A. Why is it dressed up like it’s going on a stag do with Sir Killalot? Because it’s going somewhere special. Somewhere cold. Somewhere dangerous. Somewhere called ‘Antarctica’.

If you haven’t had time to pick your jaw up off the floor yet, don’t bother. Antarctica isn’t the start of this plucky little car’s journey. It’s actually the end – the last stop on a seven continent tour that’s seen this Fifties Porsche race 20,000 miles around the world. Literally around the world. Having taken part in six of the most unforgiving and brutal rallies motorsport can serve up. 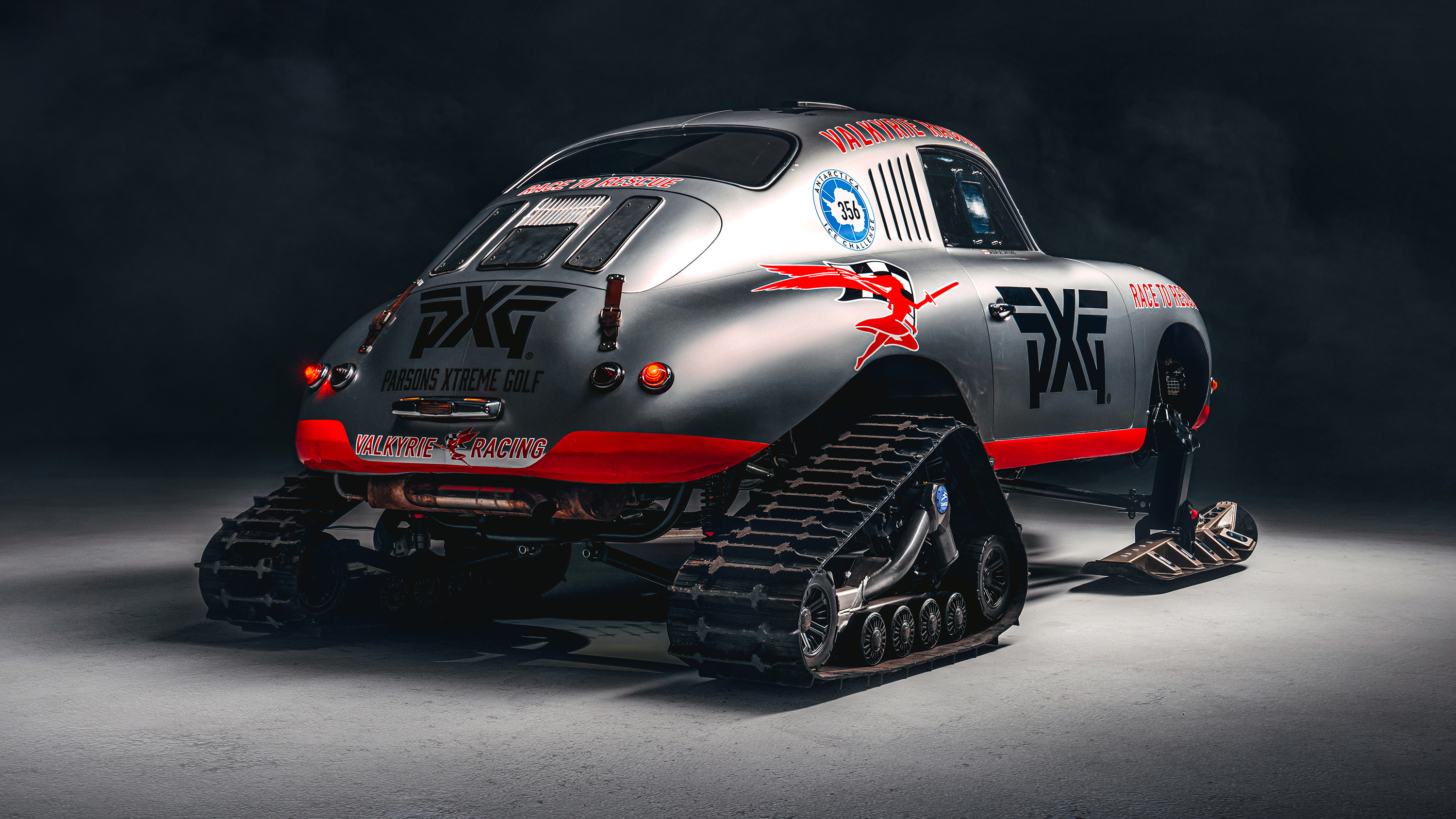 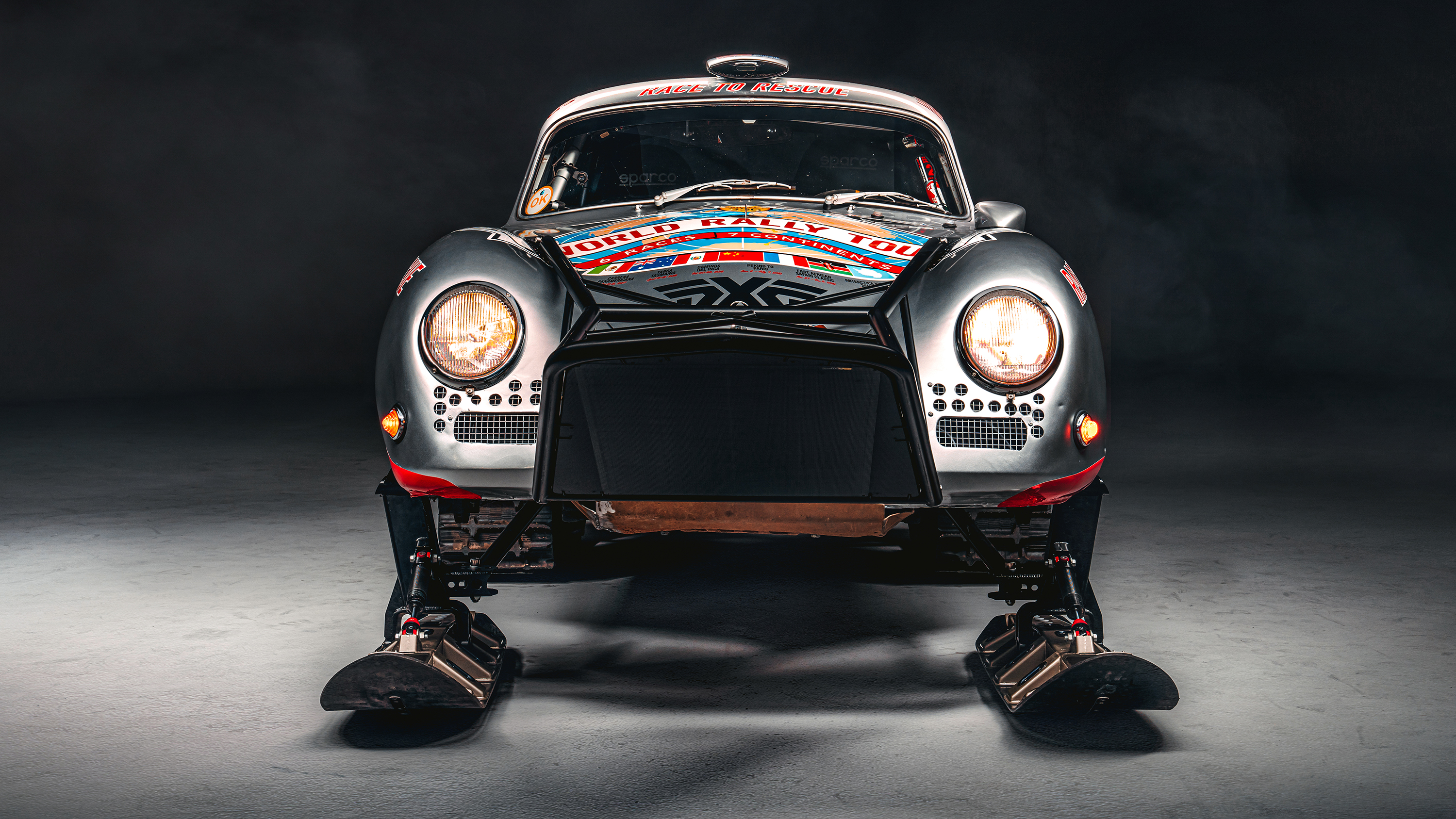 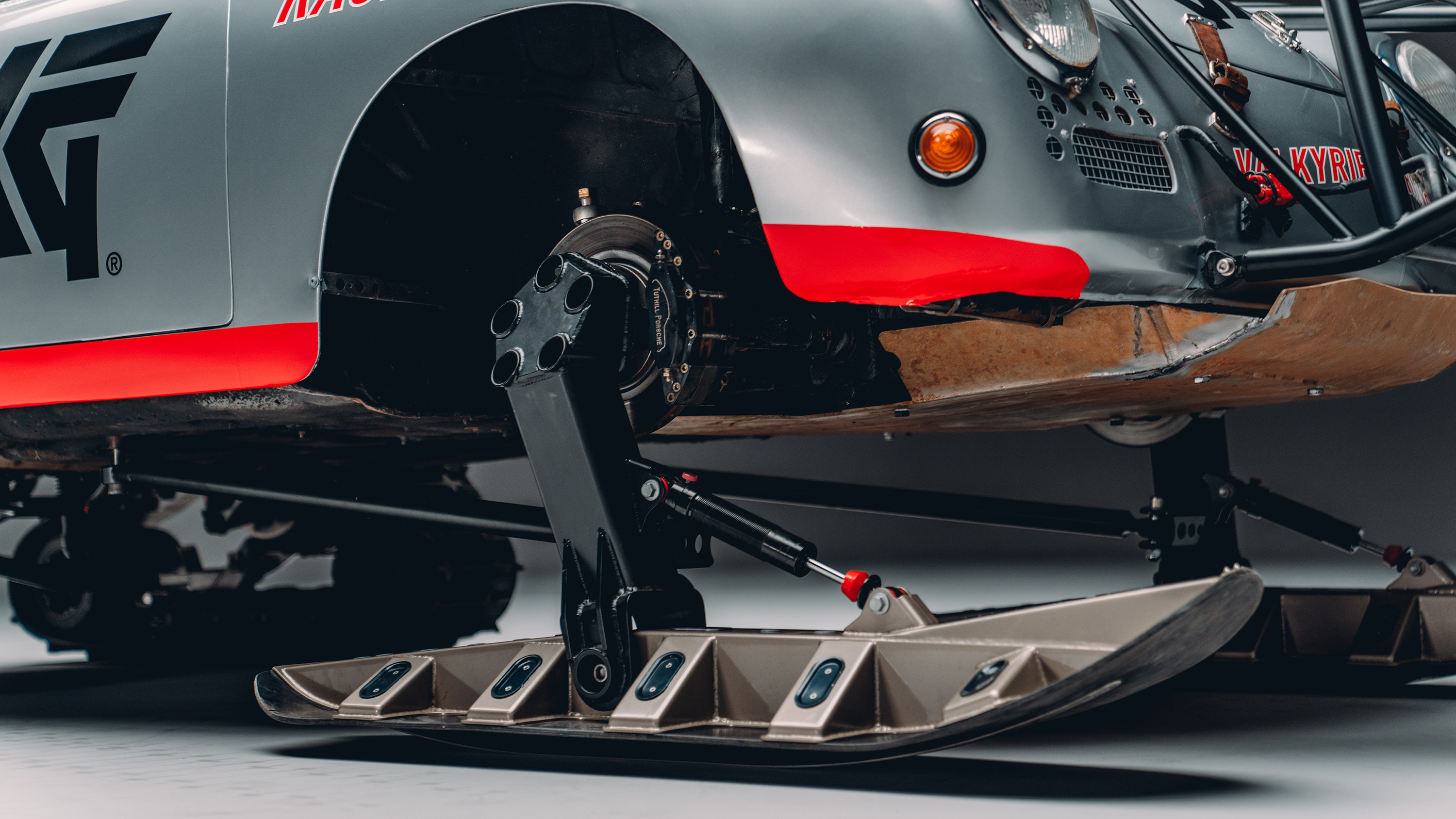 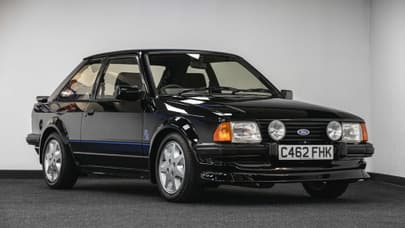 Princess Diana’s Escort RS Turbo is up for auction

It started in Mexico back in 2017, taking part in La Carrera Panamericana (the most dangerous tarmac rally in the world). From there it was shipped down under to slog it out in the Targa Tasmania (the fastest tarmac rally in the world). Wanting more punishment, it was back on a boat to South America. Peru, more specifically, for Caminos del Inca (the oldest gravel and tarmac rally in the world), a sickening race with elevations upwards of 4,900m. Next up, the Peking to Paris Motor Challenge (12 countries, two continents, 18,000 miles, 36 days and lots of energy drinks). Finally, it was off to Kenya for the East African Safari Classic Rally... during the wettest season in 40 years. Next stop: Antarctica.

The artist behind this project? A softly spoken, 65-year-old American called Renée.

“People are always surprised when they see me,” Renée Brinkerhoff says. “They’re like, ‘wow! It’s a girl!’ and ‘she’s... erm... mature’. And when you think about it, it is odd. I’m a woman – normally the only woman – and I’m in my sixties racing against all these men in the hardest rallies in the world. But I love that!”

Top Gear loves that too. Mainly because Renée’s path to racing isn’t your typical 10,000 hours of karting, a bit of autocross, junior rallies, all before stepping up onto the big stage and trying something mad like the Safari Rally. She skipped all those steps completely – starting racing in her mid-fifties having had some sort of automotive epiphany while doing – of all things – the housework.

“I was doing the laundry and had a thought: ‘I have to race!’” Fast forward a few years and she was down in Mexico on the start line of the Carrera Panamericana with zero experience behind the wheel of a Porsche 356 that she’d fallen in love with.

“My whole body was shaking uncontrollably, I couldn’t stop. On the first morning of the race two brothers who were racing a few cars in front of me rolled over. One of them died. Three days later, a car caught fire and the navigator was medevaced out.”

As deep ends go, this was saturation diving. But it didn’t put her off; Renée was the first woman in Carrera Panamericana history to win her class. And she went back a few times before setting her racing sights further afield, wanting to race globally to raise awareness and combat child trafficking through her charity, Valkyrie Gives. 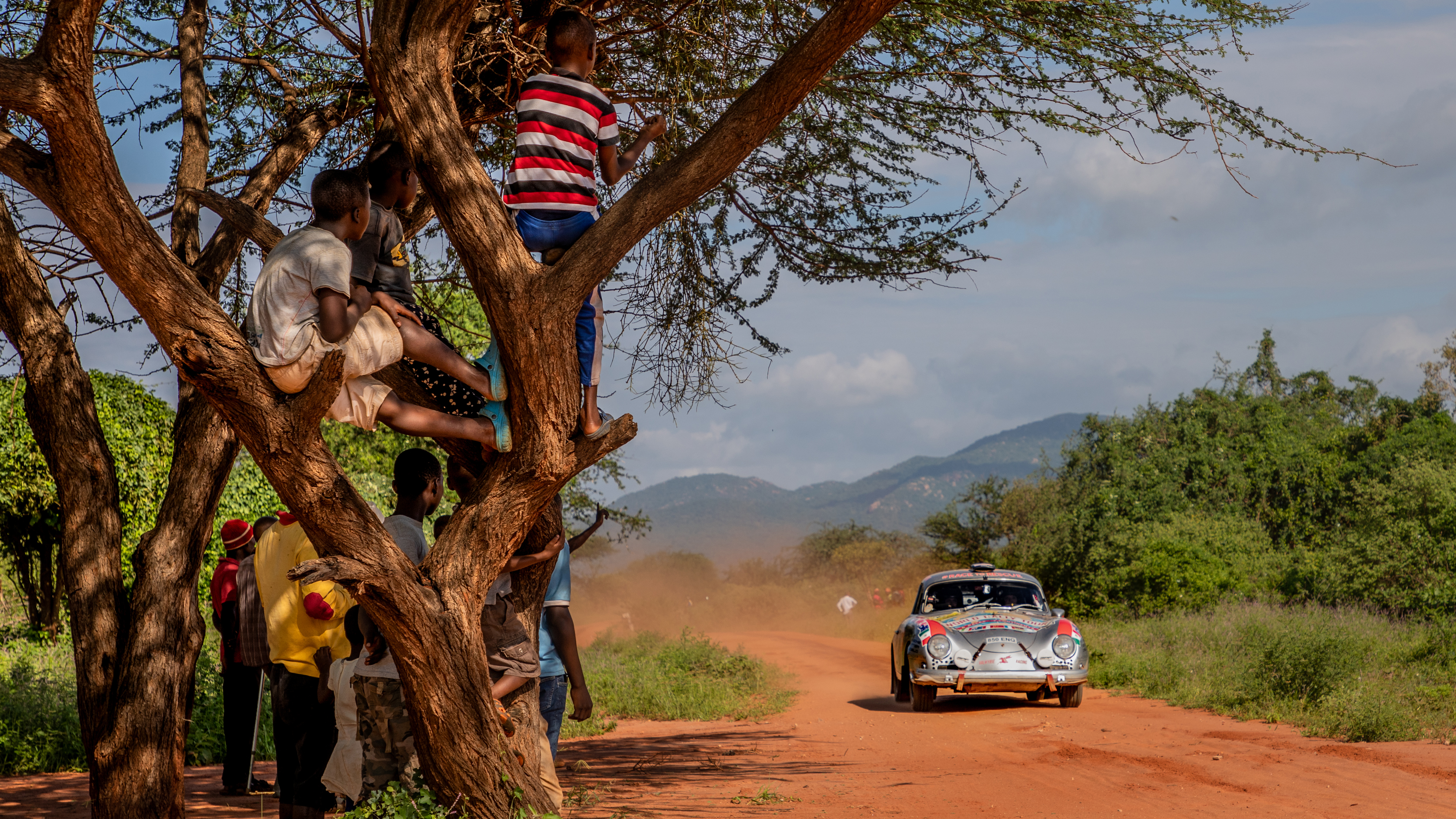 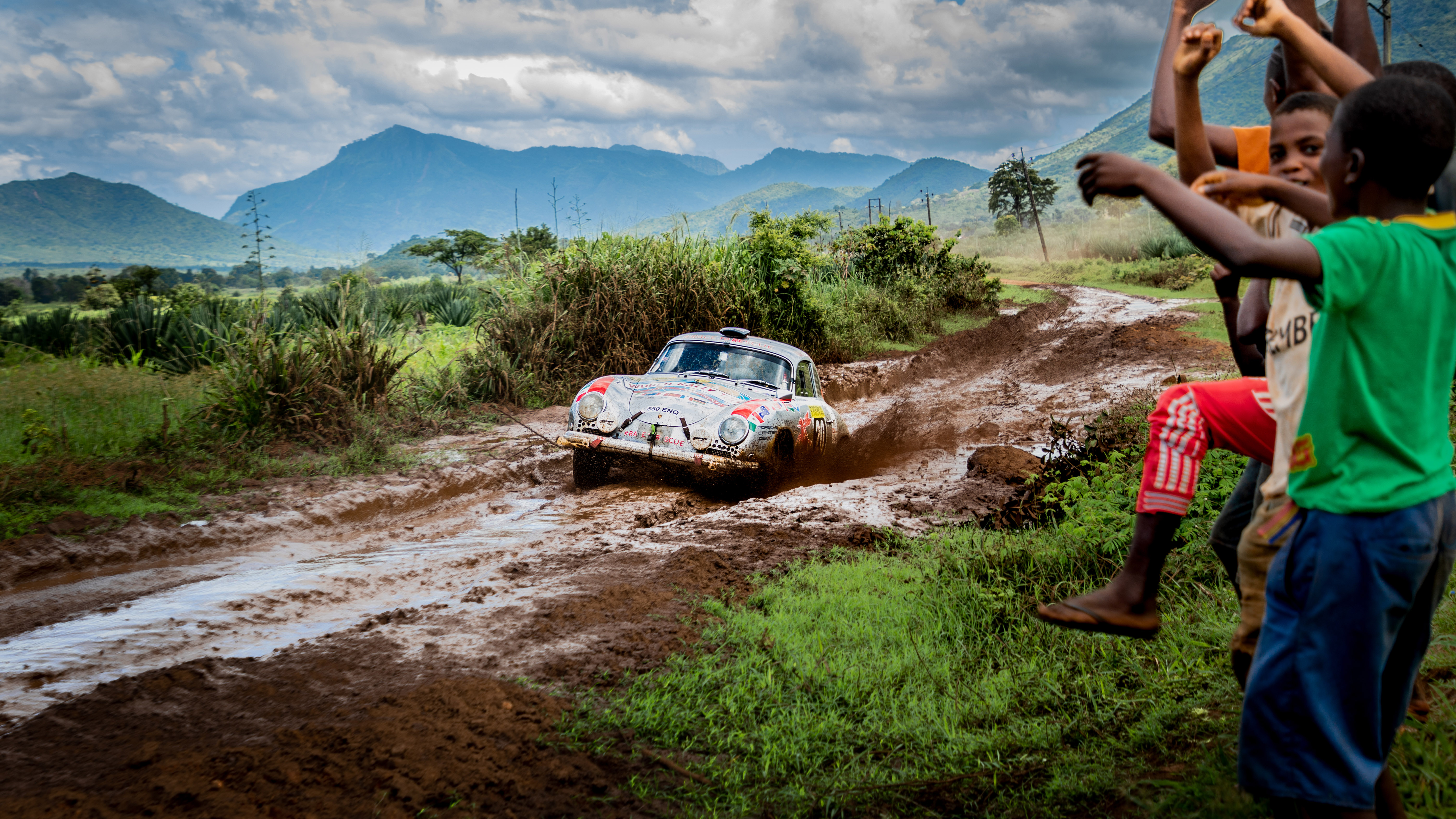 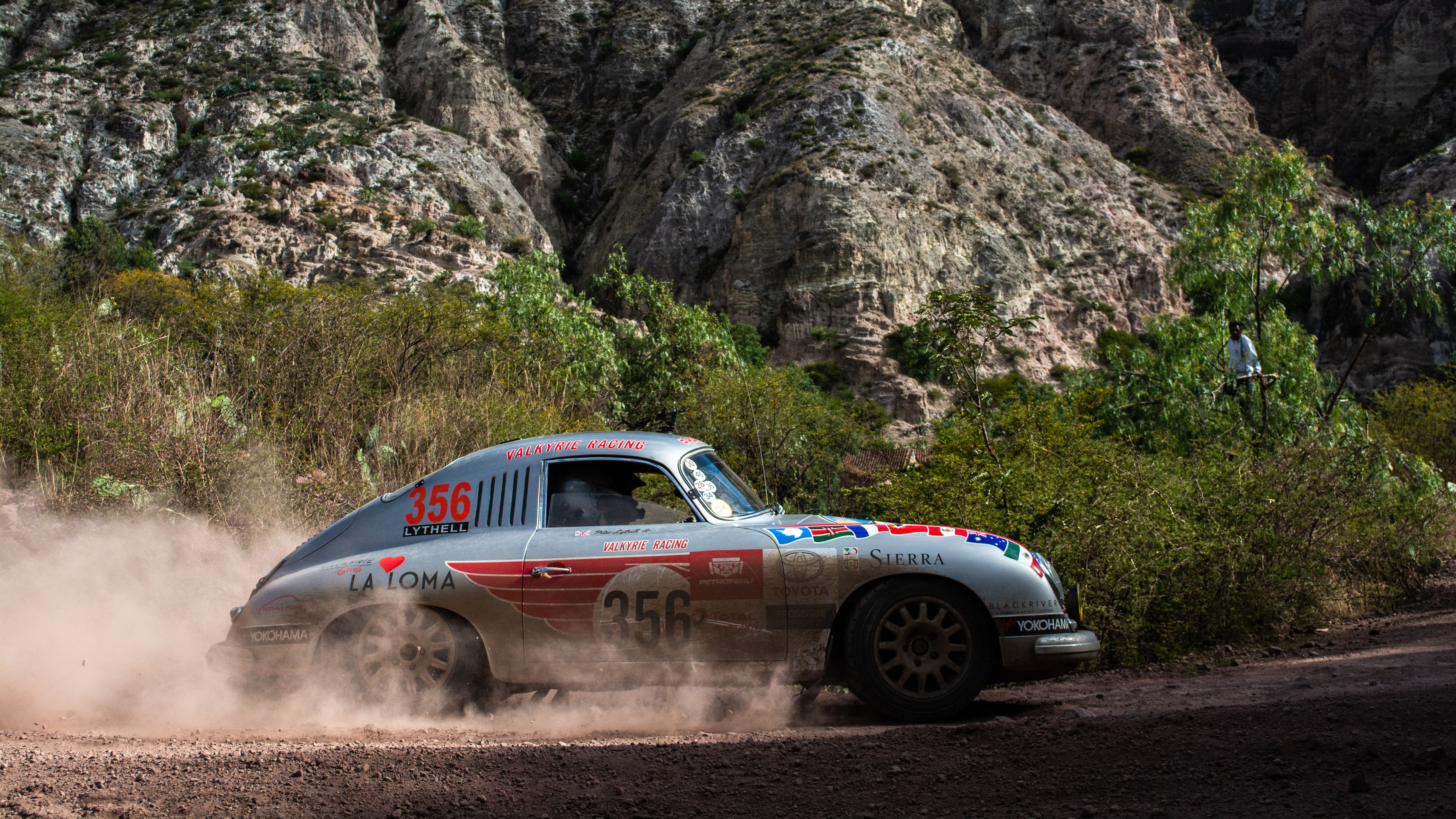 Now she’s set herself the biggest and most dangerous challenge yet: to drive 356 miles across the harshest, coldest terrain in the world and become the first person to have raced on all seven continents. That’s not all, as on the way back Renée is also going to attempt a land speed record for Antarctica.

An expedition of this nature requires a bit more than a warm coat and a pocket full of prayers. By her side navigating will be British adventurer Jason De Carteret. A man who seemingly doesn’t like to be at home a lot given he has visited both the North and South Poles nearly a dozen times, setting multiple records in the process. And given Ferry Porsche didn’t have ‘frozen tundra’ on his mind when developing the 356, it’s been down to Antarctica expert and South Pole record holder Kieron Bradley to fabricate parts to make the journey possible. Meanwhile the air-cooled 911 guru and man behind the Singer ACS – Richard Tuthill – has been taking care of the oily bits.

The first job was tweaking the engine. The hassle normally with 356s is keeping the air-cooled engines, er, cool. But when inland temperatures can plummet to nearly -90˚C and winds can reach 200mph, it’ll be the opposite for this drive as the carburettors and fuel can freeze very quickly. So there’s a new hot air intake system and some trick plumbing to keep everything toasty.

The visually striking addition is those intimidating rear tracks. They effectively recreate a massively flat tyre, providing maximum possible mass displacement (so you don’t fall through the ice) while also maintaining the biggest traction footprint. Something helped by the 120bhp four-cylinder engine being tucked into the rear. Big balloon tyres would mean you’d need to chop bodywork and it’d put tremendous pressure on the driveshafts, so you’d need to run portal hubs or reduction hubs to not melt the gearbox. Not ideal when you’re thousands of miles away from your nearest Porsche garage.

Up front, those skis may look remarkably simple but they’re far from Intersport rentals. They’re made from highly developed chromium steel that’s fabricated, then heat treated. The base of them is made from an ultra high density polytetrafluoroethylene with a blade running through the centre to provide traction and dial out any Antarctic understeer. 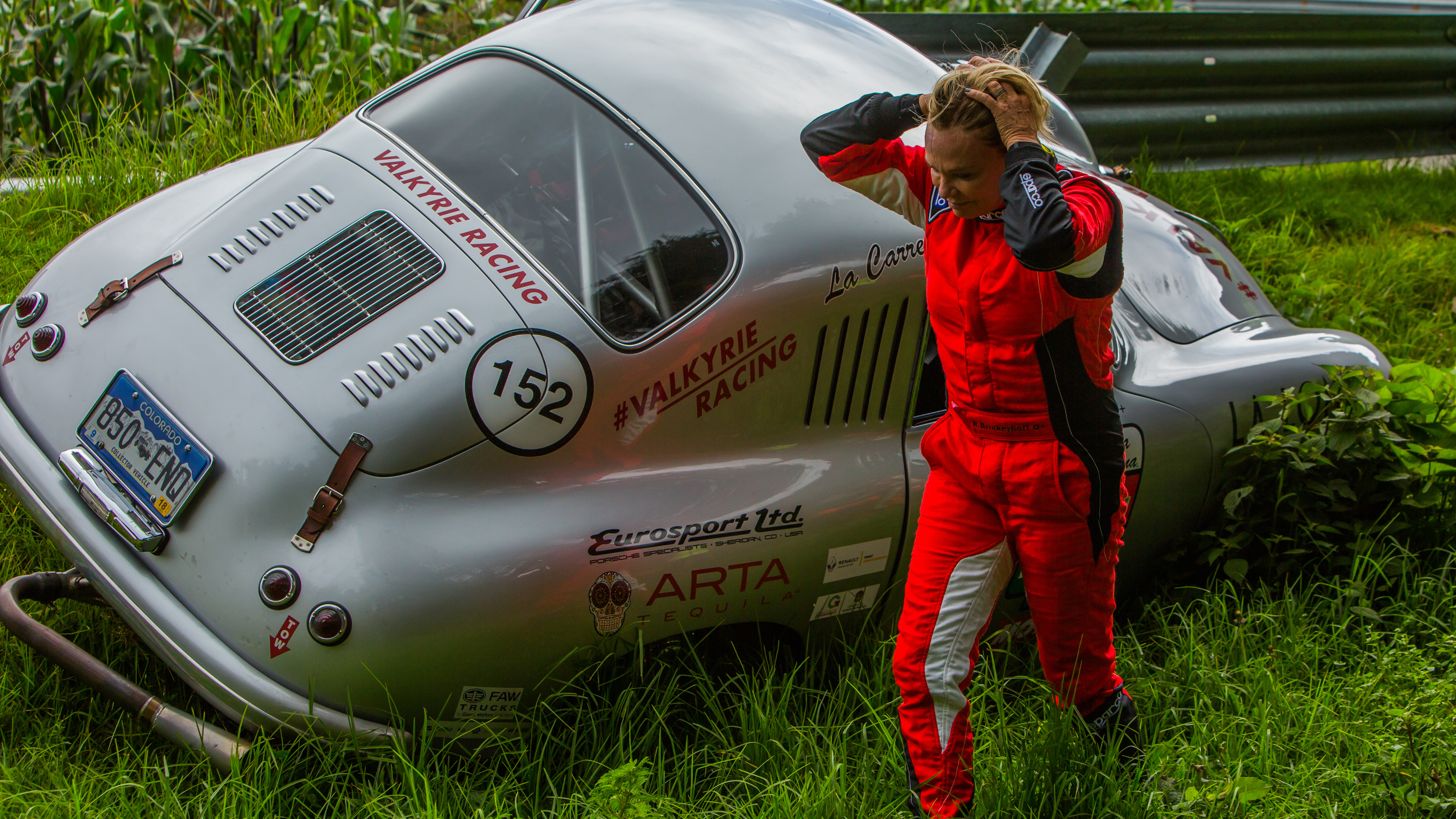 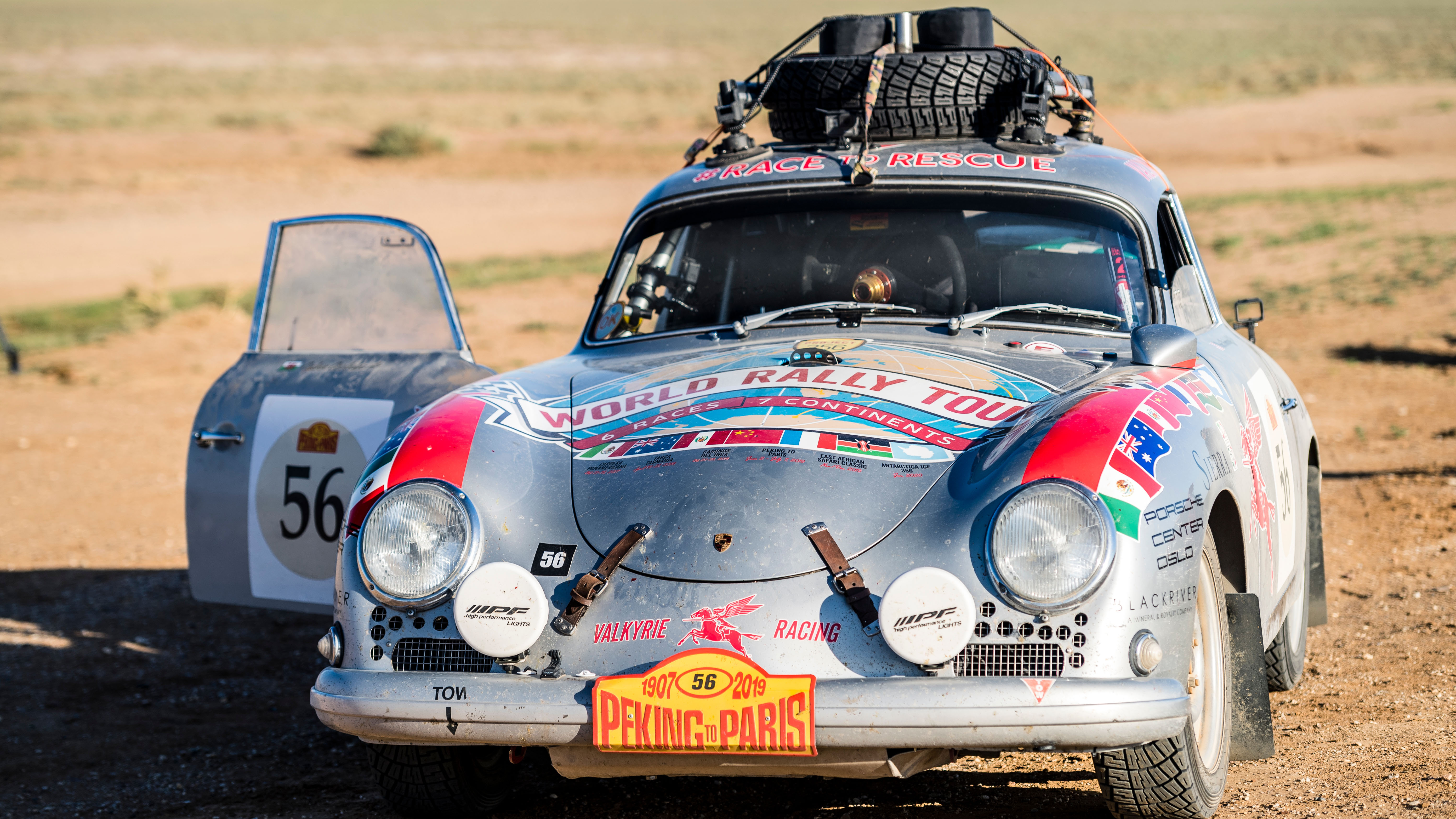 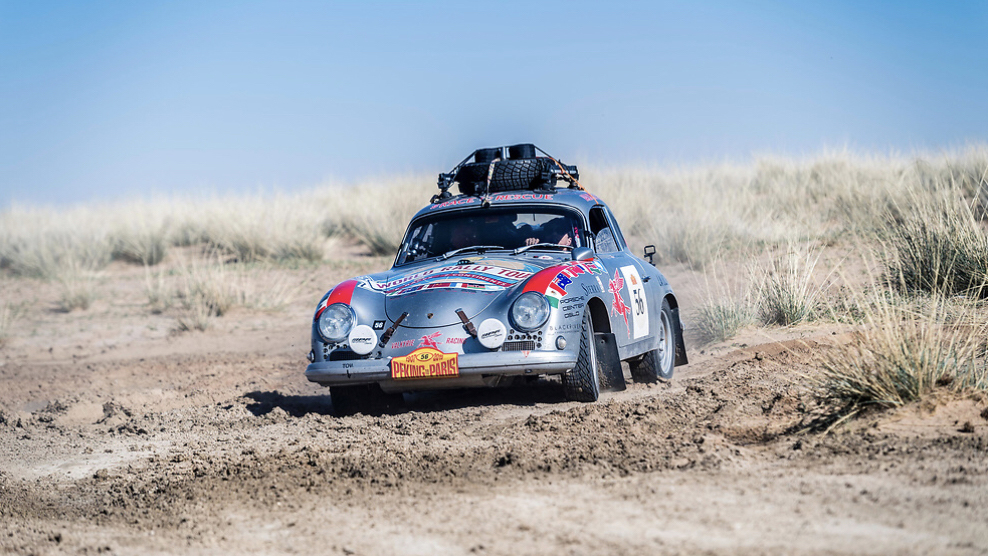 Finally, there’s that shelf thing poking out of the front bumper. And no, it’s not a diving board or podium to celebrate two potential world records on. It’s one of the most vital bits of safety equipment the car has to protect them against the deadliest threat they’ll face: crevasses.

These deep – often hidden – chasms in the ice can stretch down hundreds of metres and swallow cars whole. And once something goes in them, it will rarely come back out again. So that elongated bar on the front of the 356 is there to stop the car nosediving into crevasses, wedging it before it falls in. Handily, it also contains solar panels to help power onboard communication systems as well as being somewhere to move equipment to help manipulate the balance and weight of the car – crucial if the conditions change.

As roadtrips go, Renée and the team have signed themselves up for one of the wildest, expensive and most exclusive trips on the planet. Also one of the riskiest. By the time you’re reading this the car will be on a boat to Chile, before being fed to a Russian Ilyushin IL-76 cargo plane that’ll take it and the team to the featureless and pristine landscape at Union Glacier Camp in December. We wish them the best of luck. And now give you permission to pick up your jaw. 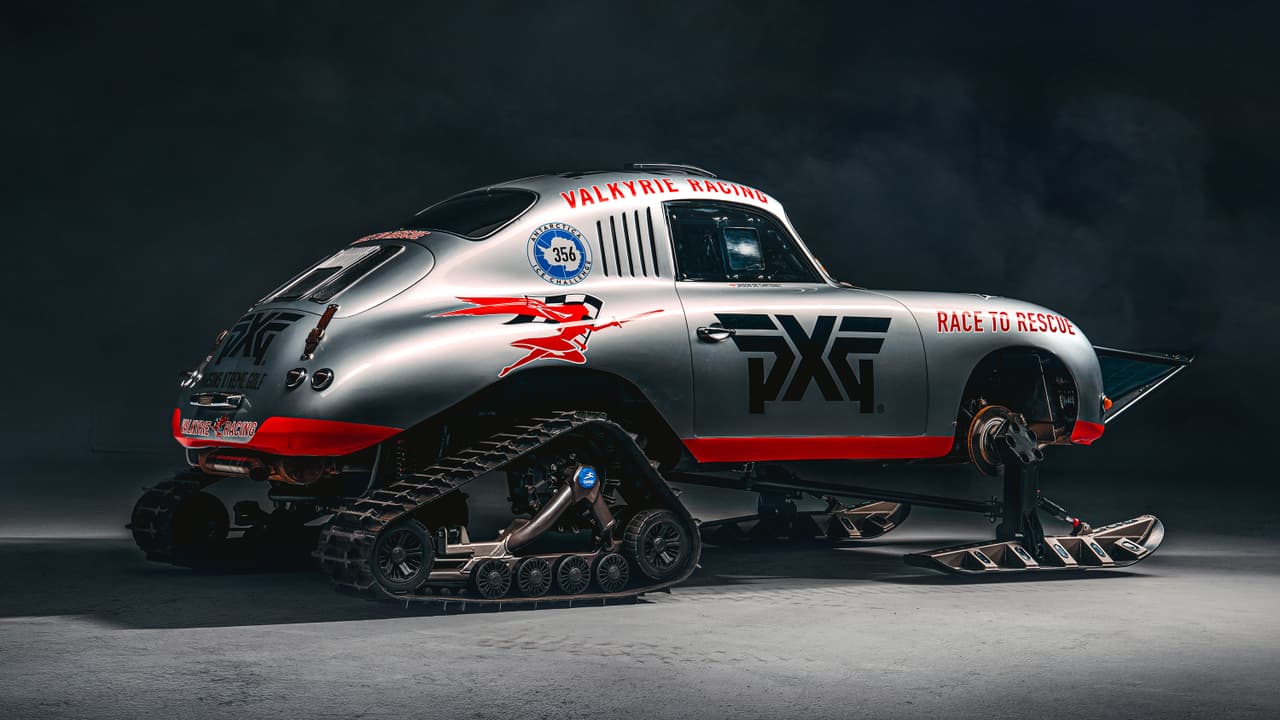